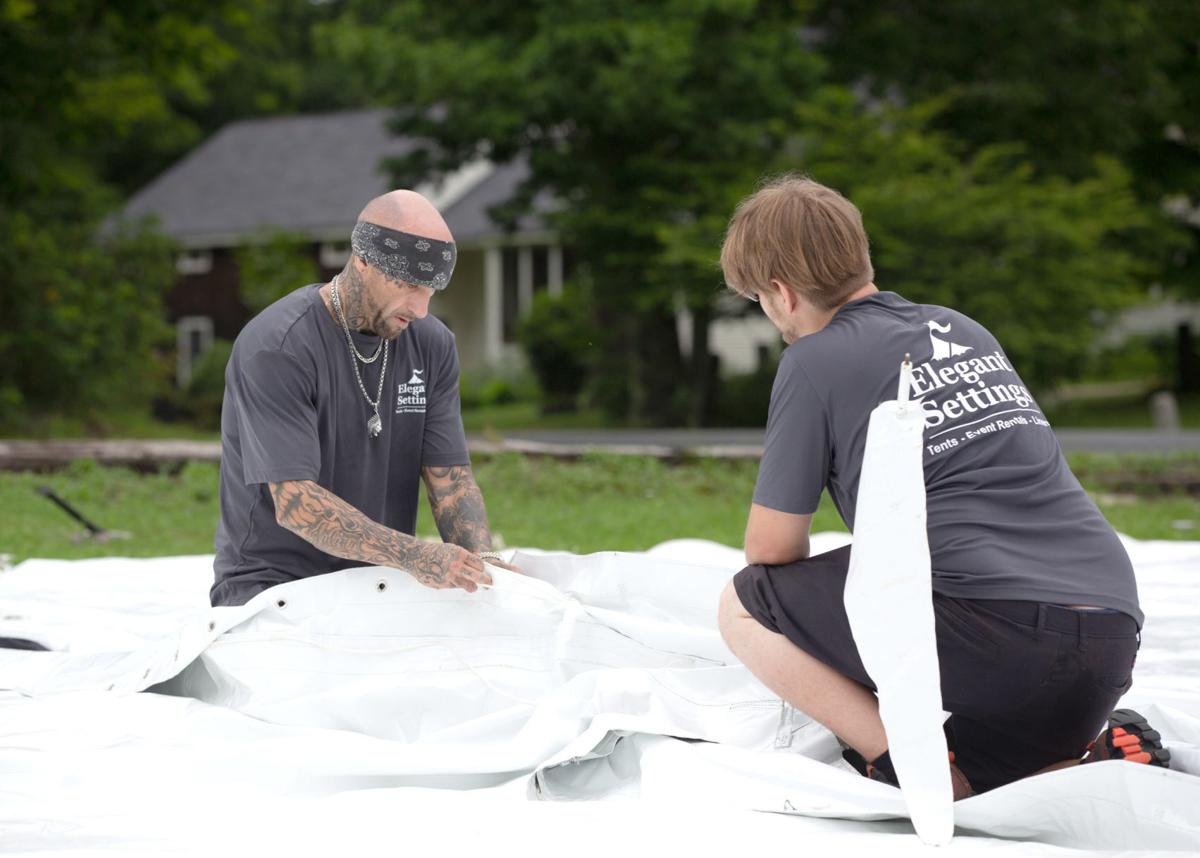 Joshua Gilbeau of Swanzey, left, and Jeremy Epperson of Keene tie tent tarps together before Elegant Settings raises a tent in Nelson Wednesday. The event rental company was hired to set up a tent for an upcoming town meeting in Nelson. 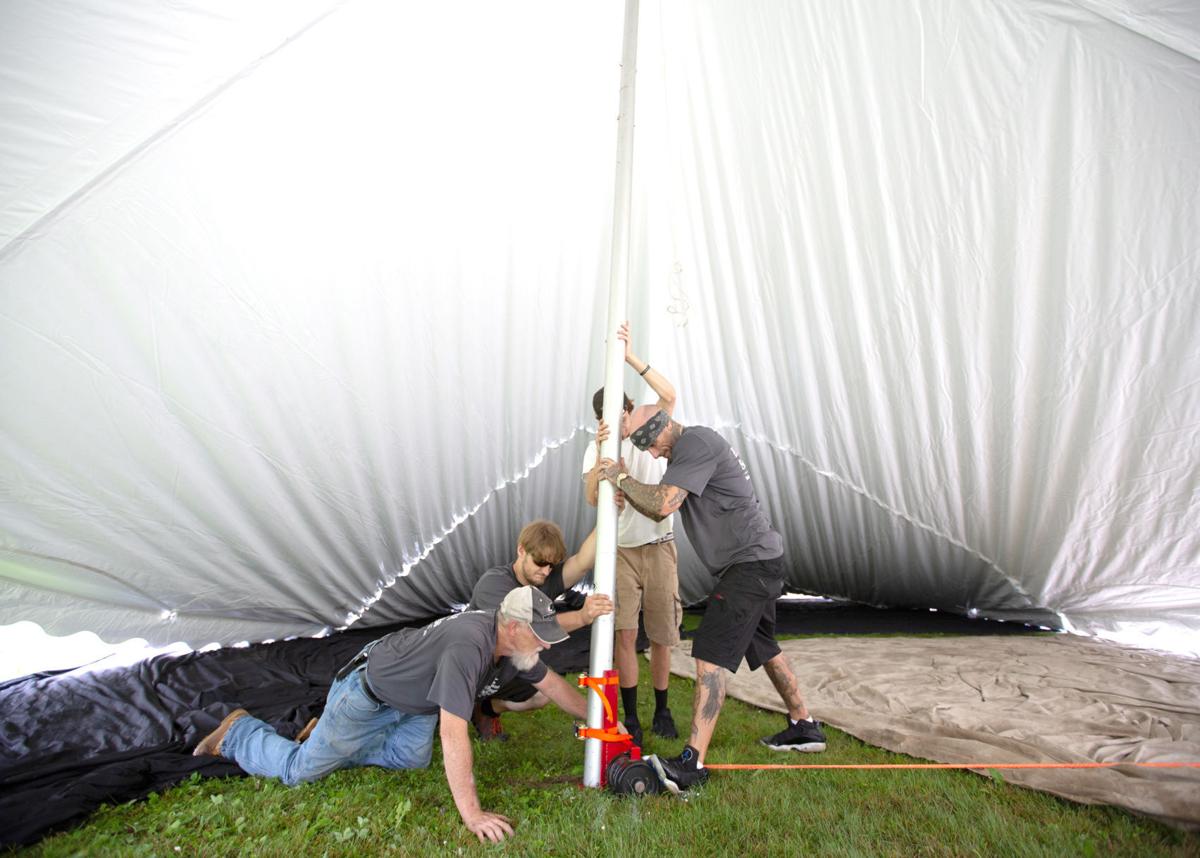 From left, Walker Johnson, Martin Pyne, Jeremy Epperson and Joshua Gilbeau of Elegant Settings work Wednesday to raise one of the center poles of the tent for an upcoming town meeting in Nelson.

Joshua Gilbeau of Swanzey, left, and Jeremy Epperson of Keene tie tent tarps together before Elegant Settings raises a tent in Nelson Wednesday. The event rental company was hired to set up a tent for an upcoming town meeting in Nelson.

From left, Walker Johnson, Martin Pyne, Jeremy Epperson and Joshua Gilbeau of Elegant Settings work Wednesday to raise one of the center poles of the tent for an upcoming town meeting in Nelson.

The Keene-based company — which offers event rentals including tables, chairs, tents, linens, dance floors, dishware — typically sees business pickup from May through October. But with the COVID-19 pandemic forcing the cancelation or postponement of large events like weddings and family reunions, Elegant Settings Owner Ted Grussing said business was down 50 percent last year.

This year, though, is an entirely different story.

“I am completely booked right now, and that normally isn’t the case. I can normally squeeze an event in here or there, but I am completely booked into September and October, and I have been for months,” Grussing said. “... I’ve probably turned away as much business as I’ve booked this year. And every event rental company across the state is experiencing this, too, not just me.”

Throughout the Monadnock Region, event rental companies, venues and caterers say they’re as busy as ever this summer, driven largely by weddings and other gatherings that were postponed due to the pandemic last year.

“People just want to get together,” said Denise Meadows, co-owner of CC&D’s Kitchen Market in Keene. “So, we had a number of weddings from 2020 that pushed to ’21, so that already kind of gave us a base.”

So, for Coridon Bratton, owner of A Vermont Table catering and restaurant in Brattleboro, the surge in business was at least somewhat expected.

“We’re very busy,” he said. “Most of our events are booked well in advance, mostly weddings. So it wasn’t necessarily a surprise. I guess the surprise was more just the unknown going into the year. In the winter, I knew we had a good calendar booked; it was just up in the air whether it would manifest.”

And with coronavirus cases declining since the winter, and COVID-19 vaccines now widely available, Bratton said people’s desire to reschedule celebrations is driving even more business.

“Now that we’re here, it’s panning out and we are very booked up,” he said. “I’m getting a lot of interest for other events.”

The same goes for event venues, like the Woodbound Inn in Rindge.

“I have been getting absolutely inundated with people looking for wedding dates for this year,” Manager and Event Coordinator Max Mitchell said. “… This is unprecedented.”

The inn, Mitchell said, is equipped to handle multiple weddings per weekend, and has at least one scheduled every weekend through the end of October, with one or two exceptions.

“And it’s still a moving target, because I’m still taking new inquiries,” he said, noting that the Woodbound Inn is on track to exceed pre-pandemic numbers for weddings and other events this year.

The Bellows Walpole Inn in Walpole is experiencing a similar surge, General Manager Tiffany Putnam-Vigneau. In a typical year, the inn and its event venue, the Potato Barn, host about 20 events. But this year, they already have 35 on the books, compared to the four weddings they had in 2020.

“It’s a nice change from last year, to go from seeing nobody and huddled in your homes, to being able to celebrate with your loved ones again,” she said.

And it’s not just weddings accounting for an uptick in event rentals and catering.

“Right now, we’re doing a lot of memorials, celebrations of life, just because people can do them again,” Meadows said. “So we’ve been doing a number of those, and most caterers I’ve been talking to are [seeing] the same thing.”

As a result of the increase in event inquiries, venues and caterers also say they’re taking jobs outside of typical dates and times.

“Honestly, it’s probably more busy [than before the pandemic] just because I’m finding a lot of people are willing to book dates that would otherwise not be as desirable, so things that happen on a midweek day or a Sunday instead of Saturday,” Bratton said. “So people want to get back to their plans, and they sometimes have to make compromises that they normally wouldn’t have.”

Another side effect of the surge in gatherings: People now need to reserve venues and caterers even sooner than they typically would.

“It’s kind of moved things a year forward in terms of the amount of time you need to book a venue for a larger event,” said Shane Long, owner and CEO of Aldworth Manor in Harrisville.

Bratton, the owner of A Vermont Table, said he’s taking bookings up to 16 months from now, compared to the six to 10 months that was typical before the pandemic.

“I already have a bunch of bookings for October next year, so we’re starting to fill up earlier,’ he said. “So it’s more competitive for prime dates.”

Area residents can expect this trend to last a while, too, Grussing said.

“I think this is going to carry right into 2022 without a doubt,” he said. “I’ve turned away so much business, and I’m already booking up for 2022 quicker than I have previously.”

And while those in the event rental industry say they’re glad to be busy again, the increase in business is not without its challenges. Like restaurants and other industries, event rental companies say they’re struggling to find enough staff to meet their demand from consumers.

“I only dare to book so much given what’s going on in the labor market,” Grussing said, adding that Elegant Settings is short about four employees from its typical staffing level. “I could probably try to book more if I could find the employees.”

Bratton added that the pandemic has impacted supply chains, and caused prices for many food products to fluctuate wildly, making it harder to predict how much events will cost for his catering business.

Overall, though, companies in the event business say they’re hopeful this summer surge is the start of their road back to economic recovery.

“Last year was a really big hit,” Long, of Aldworth Manor, said. “But as far as recovery, it’ll take us year or two to recover. But having a good season this year and next will help us get back on track.”