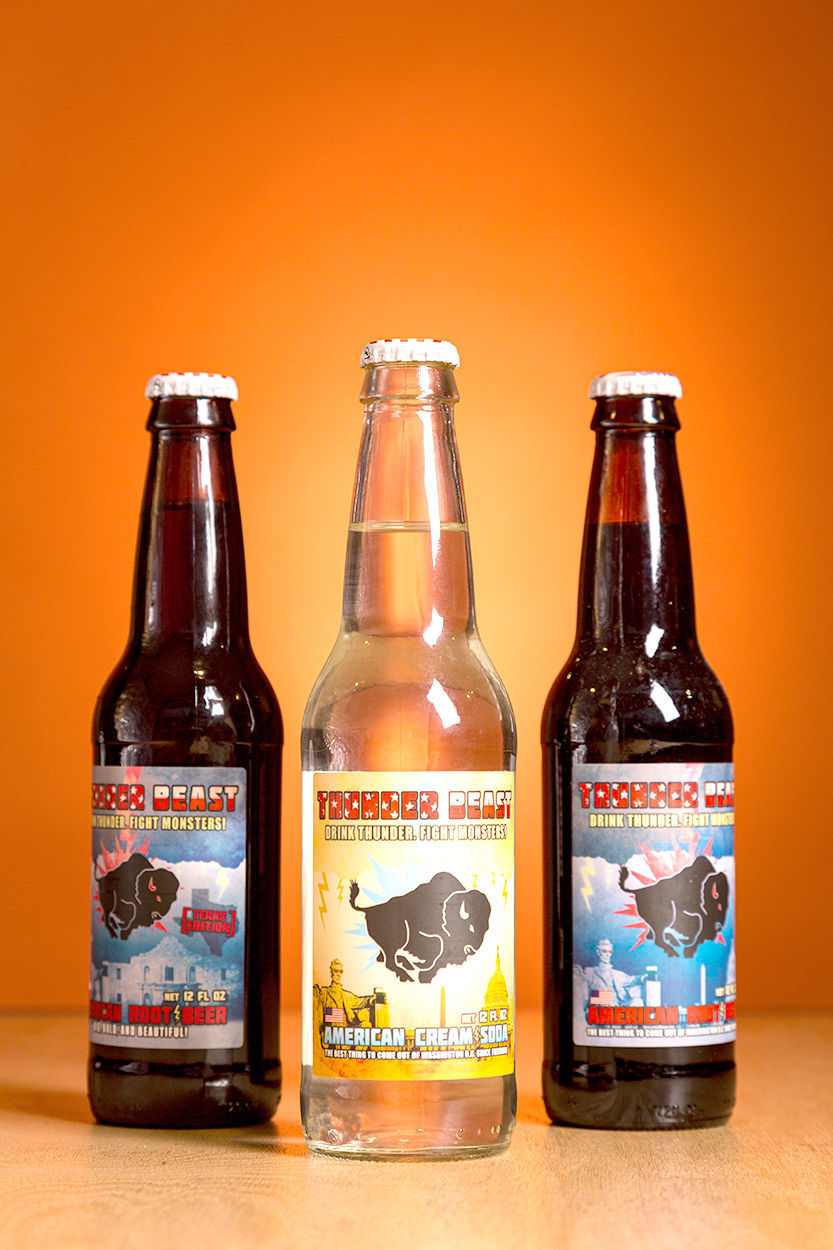 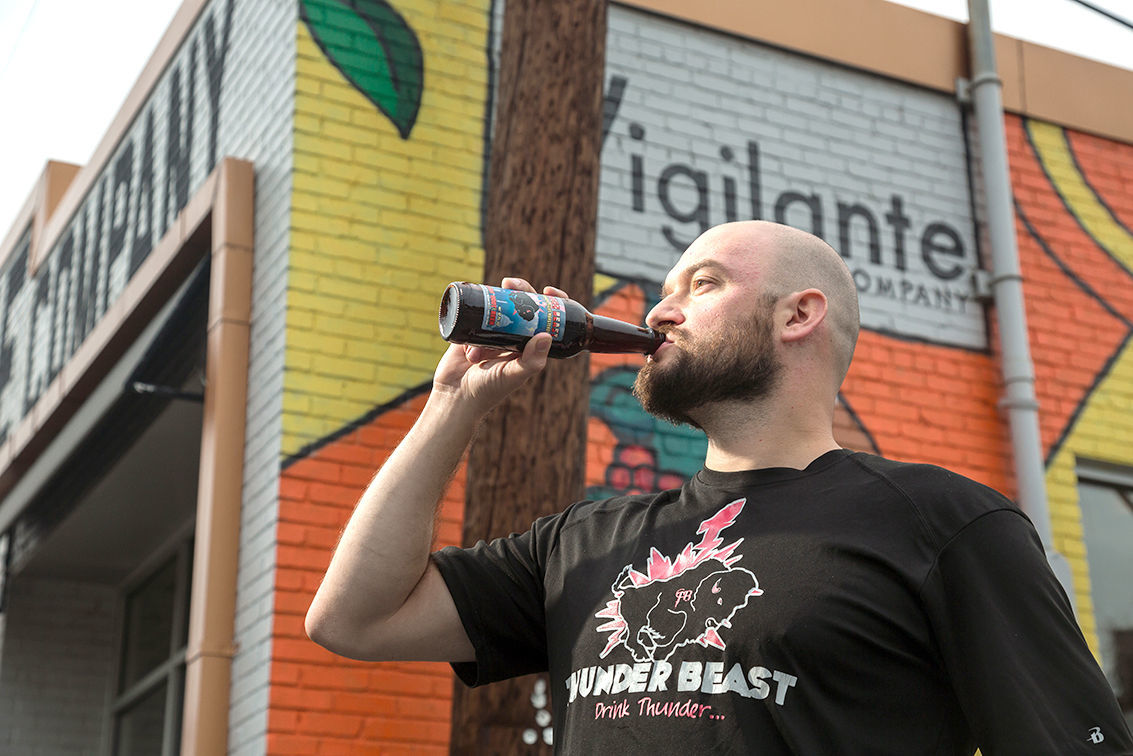 Stephen Norberg sips a Thunder Beast Original Flavor bottle. His craft soda company is locked in a trademark dispute with the makers of Monster Energy drinks.

Stephen Norberg sips a Thunder Beast Original Flavor bottle. His craft soda company is locked in a trademark dispute with the makers of Monster Energy drinks.

WASHINGTON — As an undergrad at Harvard, Stephen Norberg’s idea of fun was a keg party — with root-beer-filled kegs. Home-schooled in a small town in Missouri, he was never a huge drinker, and his keggers were an attempt, he says, to create “an alternative to alcohol to reduce peer pressure to drink by underage students.” After graduating in 2006, he moved to Washington and decided to “pursue my dream of creating my own unique and delicious root beer.”

Soon, he was manufacturing and bottling his craft soda out of TasteLab, a food incubator in northeast Washington. He named his start-up Thunder Beast, a term for bison among Plains Indians, who made a sassafras drink that was a precursor to root beer. Norberg developed more root beer flavors as well as a cream soda, and started selling his drinks in Harris Teeter and other stores in four states and the District of Columbia.

But this quirky, entrepreneurial story took a bizarre and nightmarish turn in early 2016 when Thunder Beast landed in the crosshairs of Monster Beverage Corp., an energy drink manufacturer worth $32 billion that claims to make “the meanest energy drink on the planet,” geared to “athletes, musicians, anarchists, coeds, road warriors, metal heads, geeks, hipsters, and bikers.” It’s also known in the intellectual property trade press as the world’s biggest “trademark bully,” which the U.S. Patent and Trademark Office (USPTO) defines as “a trademark owner that uses its trademark rights to harass and intimidate another business beyond what the law might be reasonably interpreted to allow.”

Monster Energy Co., a subsidiary of Monster Beverage, has a trademark for “Monster Energy,” its core line of drinks; for its slogan “Unleash the beast”; and for its logo of a letter “m” drawn with a claw. The company petitioned the USPTO to cancel Norberg’s trademark registration for Thunder Beast, arguing that its name is too similar to Monster’s slogan and would confuse consumers.

In protest, Thunder Beast started using the phrase “Fight monsters” on its website and on its bottles. Norberg also retained Eve Brown, a Boston attorney who has represented eight other businesses targeted by Monster. Her first client was MonsterFishKeepers, a group for fish hobbyists that Monster Energy said used a logo that looked too similar to its claw mark. MonsterFishKeepers was able to keep its name but lost the right to its logo. Her other clients include Brad Eastman, who used his first initial and last name — Beastman — as a name for his tea company, and B-52s lead singer Fred Schneider, who has marketed coffee called Monster Blend. Those cases are pending. In total, Monster has initiated over 1,000 trademark cases that have either gone to court or been reviewed by USPTO’s Trademark Trial and Appeal Board, according to the agency.

Monster Energy’s lawyers did not return phone and email requests for comment about the Thunder Beast case. But Lynda Zadra-Symes, a partner with its longtime law firm, Knobbe Martens, said in a 2018 case against a Florida company selling Monster Mobile auto tools: “Monster’s strong intellectual property rights transcend energy drinks and are enforceable against a broad spectrum of goods.”

Monster Energy doesn’t always win. It unsuccessfully went after the NBA’s Toronto Raptors for using a clawed-up basketball as its logo, and Disney for its 2013 film “Monsters University.” But the company frequently still gets what it wants. The cost of litigation was too much for Justin Drazin, author of “Albert and the Amazing Pillow Monsters,” an illustrated book for kids ages 3 to 8, intended to allay fears of the dark. “I had to bow to their demands,” Drazin told me. “I had written a second and third book in the series, but they were never published because of the Monster debacle.” Monster had argued his book’s title was too similar to the drink company’s name.

Monster is not alone in its zealous approach to trademark protection. Apple Inc. has claimed trademark infringement by a sandwich shop, an Ohio accounting business and a pencil maker. Trademark bullying is pervasive enough that, in 2010, President Barack Obama signed legislation mandating a Commerce Department study of the practice. But the resulting report, which cited Monster’s unsuccessful claim against a Vermont brewery, failed to come up with meaningful recommendations, and “not much has been done since the report was issued,” says Victoria Phillips, co-founder of an intellectual-property law clinic at American University’s Washington College of Law. “Trademark enforcement is important to protect businesses,” she adds. “It’s only when there’s overreach by companies that it becomes a problem.”

For Norberg, his battle with Monster is far from over. Last year, just before the trademark office was expected to rule on Monster’s case against Thunder Beast, Monster withdrew its petition and filed a separate lawsuit against Thunder Beast in California for alleged “fraudulent and malicious” conduct that it claimed resulted in “irreparable injury.” In its complaint, Monster argues that Norberg intentionally tried to mislead the public and that the phrase “Fight monsters” is also trademark infringement; the company is demanding not-yet-specified monetary damages.

At an August hearing in the case in Los Angeles, U.S. District Judge André Birotte Jr. told Monster’s attorney: “I don’t know why we’re here, other than you’re trying to crush this root beer company out of business.” Birotte had sent the case to mediation in May, but the two sides remained far apart.

For Monster, all this legal wrangling may just be the cost of doing business. But for the soft-spoken Norberg, it has had a much darker, more personal effect. “I expected the legal battle to be challenging, but nothing really prepared me for it,” he told me. “I’ve taken out loans and sold equipment. Money I would have invested in product development and marketing has been spent to defend myself. My marriage has been overshadowed by this desperate struggle. On a bad day, this feels crushing and hopeless.” So far, he has spent $65,000 on legal bills, more than his profits from the past three years.

Nonetheless, Norberg is philosophical. “Trademark bullying is part of a much larger problem in our culture,” he says. “Bullying happens whenever someone with power decides that they can take something from someone they deem weaker than themselves. So, I really want my legal battle to count for something, and I hope I can join others to be part of a larger discussion about flaws in our current legal system and how we can help small businesses who are being bullied.”