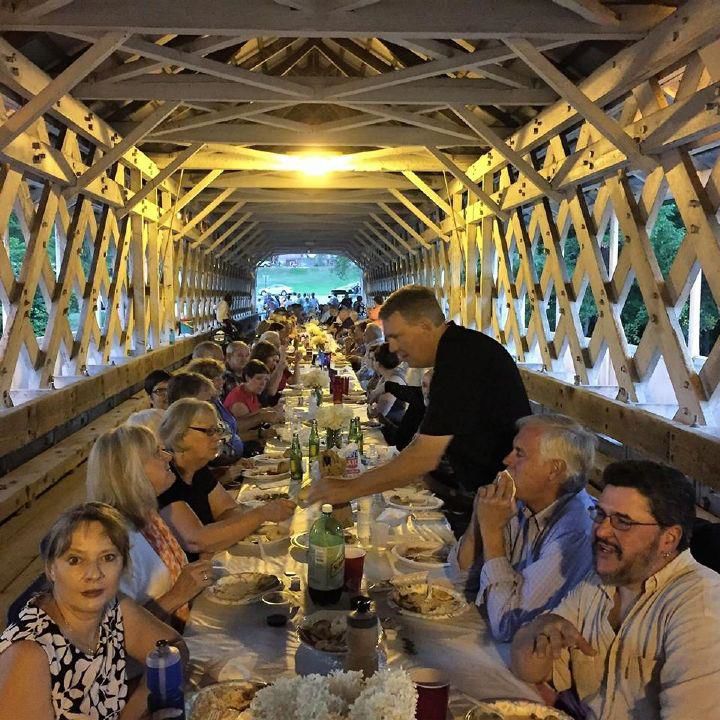 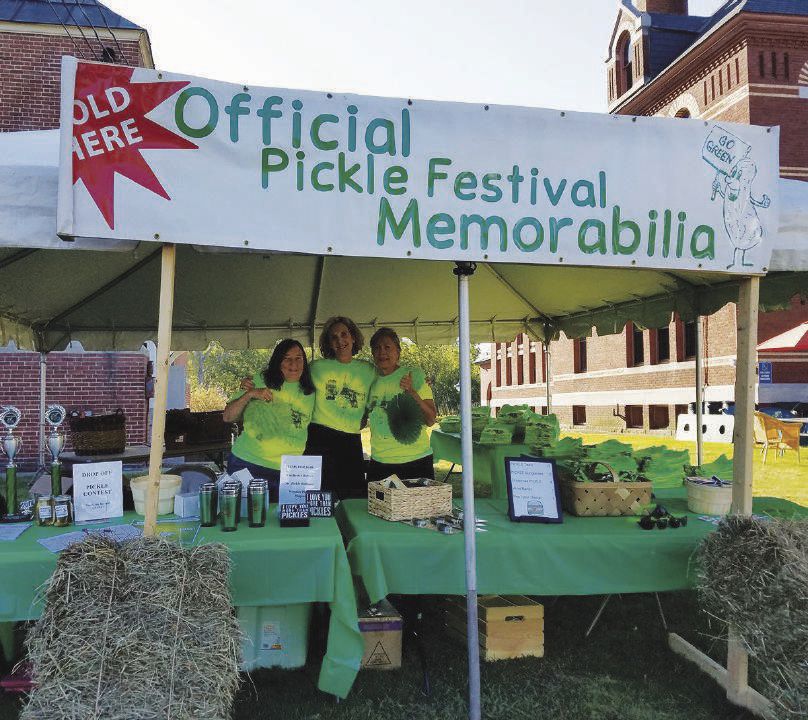 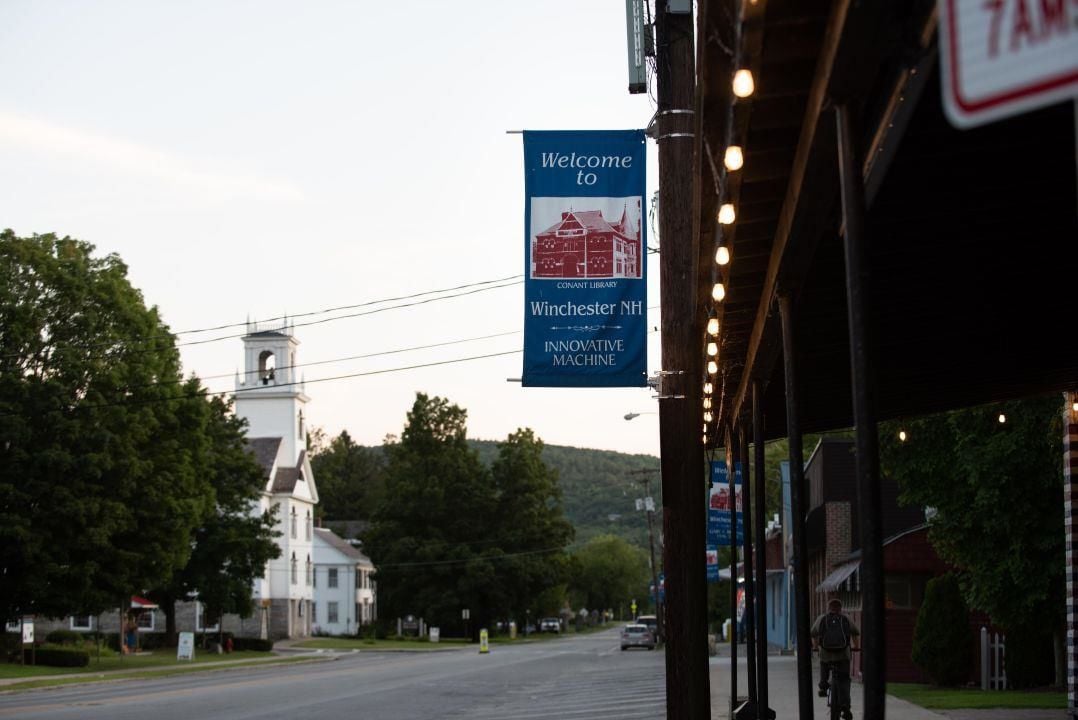 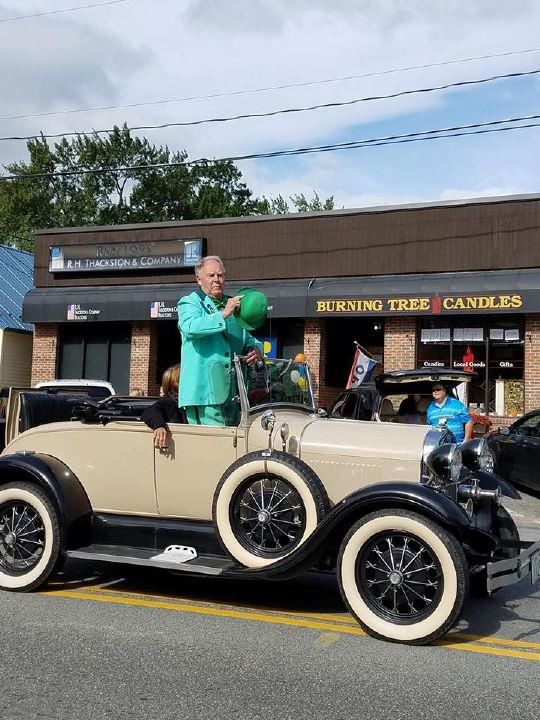 Winchester is big. It has the largest footprint of any town in Cheshire County and has shared bragging rights to the largest state park in New Hampshire. It is also beautiful. It has a high number of historic properties, beautiful brick municipal buildings and its downtown and historical center, Ashuelot Village, follow the winding flow of the Ashuelot River.

Winchester is not self-sufficient, as is no small town, historically or presently. Winchester has had a long relationship with nearby Keene, which has been the benefactor of Winchester’s wealth — a product of its rich industrial history, including sizable donations to the development of the Thayer library, the YMCA and Elliot Hospital.

Winchester was once connected by rail to Boston, with outgoing passenger trains leaving five times daily from the depot. Today, the traffic count is higher, upwards of 7,000 cars travel Main Street each day; some are residents while others are regular pass-through commuters. The speed of travel sometimes impedes a closer look.

Many rural towns have suffered in the wake of a changing economy --and Winchester is no different -- but in looking for an example of a town that faces its challenges with resilience and a deeply ingrained can-do attitude, Winchester may just be the model. It is a corridor of opportunity for those who visit and those who come to stay.

Two organizations are active in the economic and cultural restoration of Winchester: the Revitalization and Economic Development Committee (RED), a town committee; and the Winchester Economic Development Council (WEDC), a private nonprofit. The WEDC, started in 2010, led by Executive Director Mark Tigan, works as a liaison between new businesses and the town. Their current project, the building of the Stone Mountain Business Park, just secured a $666,000 federal grant and the group is in communication with the state to attract future tenants. The RED committee’s work focuses on “giving platforms for local businesses already here to connect to the community,” says committee member and business owner Jason Koerber. These platforms tend towards cultural events including Music in the Park, a diverse 10-week series, funded by local businesses to promote downtown Winchester.

Business owners are also actively collaborating in self-promotion and plan to release an area business map shortly. The hand-drawn map focuses on the availability of services in the area connected by a rich network of natural resources. The map highlights Forest Lake recreation area, Pisgah State Park, river kayaking and a network of rail-trails that stretch from Keene to the Connecticut River.

Town Land Use Administrator Margaret Sharra opened the Arlington Inn and Tavern in July of 2019 in a historical building on Main Street. The business is a family affair with daily operations run by her daughter, Jordan. Sharra hopes that the Inn not only gives shelter to those traveling through Winchester but also gives more life to her outlook — that Winchester is a destination for food, natural resources and attractions.

One of Winchester’s assets is its accessibility to nature. Among the ideas that surfaced in the town’s 2008 plan for revitalization was honoring and making that connection to nature more accessible. Looking back on this document at an economic forum in January, Sharra says that it was evident that some of these ideas had been acted upon including two canoe launches, a pocket park with a river view next to the historical Pisgah Diner, and sidewalks that run the length of Main Street.

The Ashuelot River, once home to the toxic run-off of tanneries, paper mills and woolen mills, is now crystal clear and “pretty much drinkable,” says Jennifer Bellan, town historian. Since January she reports that she has seen three bald eagles on the river.

Winchester also hosts the main entrance to Pisgah State Park, home to more than 13,300 acres of forest and a complete watershed. Although the park does not offer overnight camping, day-use opportunities abound, including boating, fishing, bike riding and ATV use. But if the ATV trails aren’t fast enough, head to the Monadnock Speedway and Winchester Speed Park to see amateur and professional motocross and stock car racing.

Winchester contains a diverse food culture. It is home to farmers, distillers and brewers and has opportunities, big and small, to revel in good food.

Although Winchester sits on the Connecticut River Valley, its topography is diverse.

The Woosters bought the farm from Albert and Judy Hudson, who remain as neighbors and to whom Jenny Wooster says they have a “profound connection.” The Woosters feed over 700 households and offer a choice of CSA options for residents and those in surrounding communities. The farm also works with Granite State Market Match and accepts SNAP benefits.

While some of Winchester’s land is flat valley (as in the Picadilly Farm land), it is more often than not, both hilly and rocky. Despite these limitations, Patti Powers has been growing organic berries and mustard on her hillside farm for more than 35 years. Cheshire Gardens, the farm she runs with her partner, Ralph Legrande, was one of the first farms to be certified organic in New Hampshire.

Sam Canonica and Sarah Costa run Manning Hill Farm, another hillside farm, which produces milk and meat from their herd of Dutch belted cows. The couple also recently expanded their farm purchasing an additional 167 acres in 2018, also in Winchester.

Wingate Farm in neighboring Hinsdale also has a relationship to Winchester, sharing their eggs, poultry, pork and produce. The farm partners with Picadilly Farm to provide eggs in their CSA and has donated greens to dinner on the Ashuelot Bridge.

Also unique to a town with a population the size of Winchester is its year-round farmer’s market started by the RED committee in 2016. The market has four to six regular vendors selling fresh bread, plants, crafts and vegetables.

In regards to Winchester’s revitalization, the Sweetwater Distillery, located right downtown, is a point of pride.

“Sweetwater has been a big part of the revitalization of downtown — when they started making that business happen, getting those buildings up to code. It has made a big impact on how downtown looks,” notes Koerber.

Sweetwater owner Robert Patton-Spruill’s dedication to the restoration of the building is a labor of love that derives from his desire to be his personal best, a drive that is self-evident in the restoration videos available on the Sweetwater Distillery website. Patton-Spruill has been part of property investments with Dylan Eastman creating a micro-culture of deep investment that anchors Main Street. Eastman, a Main Street neighbor, plans to open Silver Arrow Winery next door to Sweetwater in the historical corner post office building with partner Naomi Risch. Also widening the culture of high-end libations in Winchester is Outlaw Brewing Company, making craft beers with local ingredients on Scotland Road.

In the Fall, Winchester hosts its annual Pickle Festival. The Pickle Festival is in its 22nd year and functions as a nonprofit organization welcoming more than 85 vendors and 5,000 visitors. Visitors are welcomed with a free pickle provided by the town from by Patriot Pickles in New Jersey. Each year the town enthusiastically reaffirms its commitment to the festival by approving the warrant article that allocates the funds to buy the pickles.

The festival continues a historical tradition. Henry Parkhurst, Mr. Pickle, has led the pickle festival parade for 20 years, and visitors can participate in pickling and pickle eating competitions as well as shop and listen to live music.

But the festival continues to evolve, and now has a sustainability focus says Pickle Festival Chairman Kevin Bazan.

“In our bylaws, in our mission statement, it talks about supporting local agriculture and sustaining agriculture in the area, recycling and reusing,” notes Bazan. “Yes, you can eat fried food and listen to music. But we also preach recycling and at the end of the day the trash team that separates all the garbage, compostables.”

Additionally, every spring for the last three years Winchester has held a local food festival, an “amped up farmers’ market,” says Koerber.

This past May a couple 100 people packed the town hall, sampling food, watching cooking demonstrations and listening to music. The festival began with a grant acquired by the Cheshire County Conservation Commission to promote the use of the Granite State Market Match, a program to double the value of SNAP benefits when used to buy local produce. For two years, the festival received grant and institutional support under the direction of Lola Bobrowski, outreach coordinator for the Cheshire County Conservation District. Bobrowski continues to be involved and since her initial work in Winchester has become a resident. Today, The festival stands on its own with the support of the RED committee and is becoming a bigger incarnation of its former self. The event, billed as Winchester Community Day in 2018, partnered with the ELM Community Center for a 5K run and a town-wide cleanup.

A more formal and intimate celebration of food happens every fall when the Ashuelot Village hosts a ticketed dinner on its historic covered bridge. The 2019 dinner marks its 7th season. The dinner is supported through the efforts of the RED committee, including lighting, set-up and serving. After the 140 diners have enjoyed their catered meal and live music, the proceeds benefit the Winchester Historical Society located in the adjacent Sheridan house and the ELM Community Center’s newly proposed playground.

With this focused attention and investment, Winchester is poised to become a unique destination. It is not one person, committee or business that has brought Winchester into the light for reconsideration. It has been the work of many over the past 15 years and is the result of a dedicated focus towards improving the business environment and the cultural life of the town. Winchester’s natural resources and food culture are intertwined with its economic vitality. Food and spirit companies give life to Main Street and food festivals give opportunity for tourists and residents to enjoy Winchester at its most beautiful and delicious.