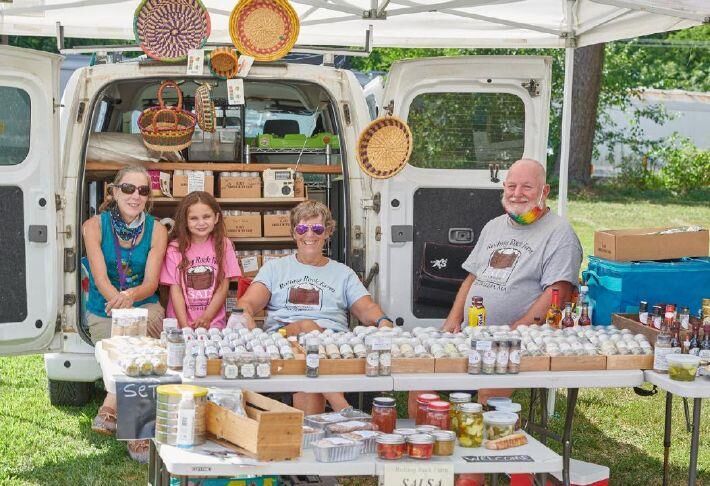 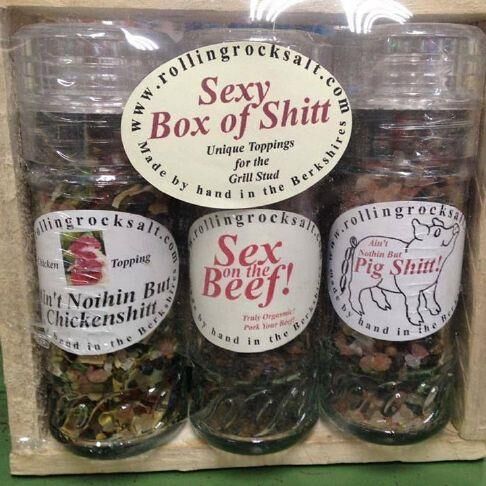 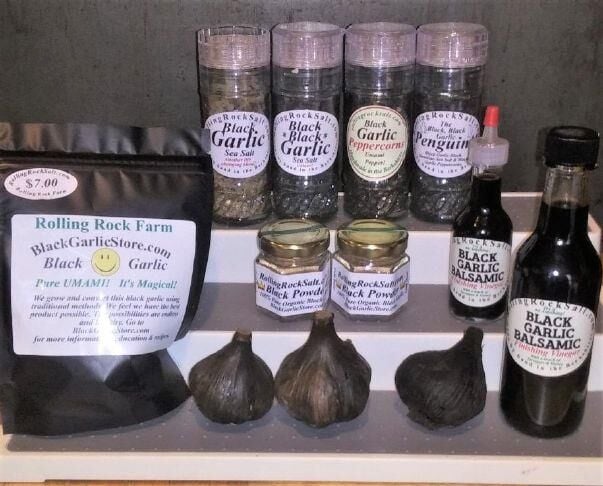 As customers browse the flavored salt selection at the Hannah Grimes Marketplace in Keene, store managers overhear a lot of laughter.

Product names include Sex on the Beef — a blend of sea salt, peppercorns, black truffles, porcini mushrooms and black garlic — and Tony’s Tremendous All-Purpose Topping — garlic, sea salt, mushroom and peppercorn with fresh herbs. The label on the latter boasts, “We put this shit on Toppa Everything!”

“We’ll hear people laughing all the time about them,” assistant manager Emily Russman says. “I’ve had people pick them up and read the title and say, ‘I have to buy it, because of that.’”

The humorously named seasonings come from Rolling Rock Farm in Sheffield, Massachusetts, and are a brainchild of Tony Carlotto, a farmer and former camera store owner. Making people laugh is exactly what he sets out to do.

“We aim to make the whole world smile,” he says, his mission being to spread “peace, love and happiness through food.”

Rolling Rock Farm has been around since 1980. Carlotto began making salts and blends about 10 years ago, after growing a plethora of garlic and reading a pamphlet about making one’s own garlic-infused salt.

Customers can now choose from more than 50 kinds of Rolling Rock Salt, sold on Etsy, at festivals, farmers markets and locally owned farms and stores in New England and eastern New York. In the Monadnock Region, his products are also sold at Monadnock Oil and Vinegar in Peterborough.

The operation consists of Carlotto, his life partner Darby Weigel, his sister Robin Carlotto and granddaughter Bailey Carlotto, with several seasonings named after the team members. Tony’s Tremendous is the top seller.

“About six years ago, I said I’m gonna name one after myself,” Tony Carlotto, 68, says. “I picked out a combination and got lucky that it was a good combination.”

Darby’s Garlic Festival, a garlic salt blend named for Weigel that boasts being “guaranteed best on the planet,” is the second most popular, with Sex on the Beef coming in third.

Russman says she uses Tony’s Tremendous, Darby’s Garlic Festival and Sex on the Beef on her home cooking, much of which is vegetarian or vegan.

“It’s like, general use,” Russman says. “If I’m cooking dinner, I’m going to add that.”

There is a fish topping called Magic Bailey, named for Carlotto’s granddaughter. Other products, including a Tuscan blend and a salt-free seasoning, are also named for Tony Carlotto. He says he is still working on a salt or blend worthy of his sister’s name.

Other products include Humpty’s Egg Topper, bacon-infused salt with pepper, herbs and spices; Bee Shitt, a honey-infused sea salt and The Scorpion, labeled “The Hottest Sea Salt on Earth.” There is also Every Fukn Thing, an everything topping that customers can opt to order with a family-friendly label, Berkshire Spice & Everything Nice.

As Carlotto describes the different flavors, his cat, Dick, meows from his lap, and Carlotto is reminded of Magic Dick, a traditional seasoned salt named after his feline companion.

“It’s hard to use dried ingredients in it because they don’t really take the flavor well,” he notes.

For the salt base, he mostly uses Himalayan salt. He grinds together the ingredients using a Cuisinart grinder or by hand and sets out the result to dry, sometimes using mild heat.

“If you heat things up too much, you lose the flavor,” he says, then adds with a laugh, “Unless you’re making bacon.”

An ingredient in some of his popular seasonings is black garlic, which is garlic that has been under temperature and humidity control for long enough to change its chemical makeup, called the Maillard reaction.

“It’s beyond roasting. It’s beyond fermentation,” Carlotto says. He describes the flavor as sweet and licorice-like, “almost like candy. … It’s absolute magic on anything.”

Black garlic is the main flavor in Sex on the Beef.

Two years ago, when Carlotto had a stroke, he approached his recovery with the same positive attitude. Among his offerings on Etsy is a salt-free line of seasonings called Tony’s Unsalted No-Stroke-No Joke. Its flavors include a Santa Fe Trail Southwest topping, Unsalted Chickenshitt and Castrated Beef.

“I call it a ‘stroke of luck’ instead of a stroke of death,” he says. “I attacked it with positivity and humor from day one.”

Carlotto says the stroke resulted in a loss of function on his left side. Through physical therapy, he started walking again a little over a year ago. His left arm, he says, is better every day.

“I can gauge it by my salt-making activities,” such as his ability to put tops on bottles or stick-on labels, he says.

“They’re a good addition to anything. Anybody can use them,” she says. “For personal use, or to give as a gag gift — although, it’s more than a gag gift because it’s actually great.”