You have permission to edit this article.
Edit
Home
Content
Recipes
Advertise
Directories
Contact Us
Find Us
1 of 6 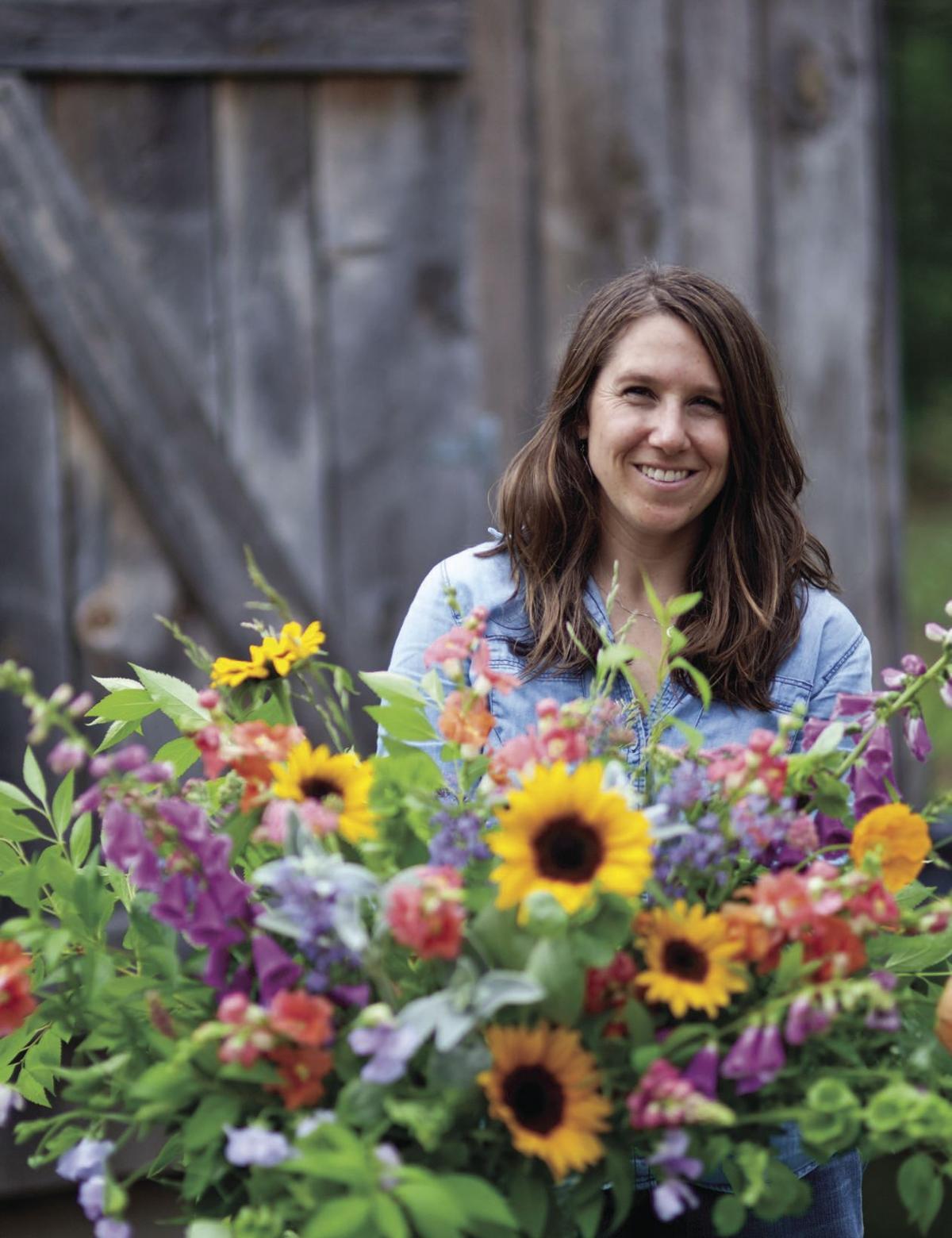 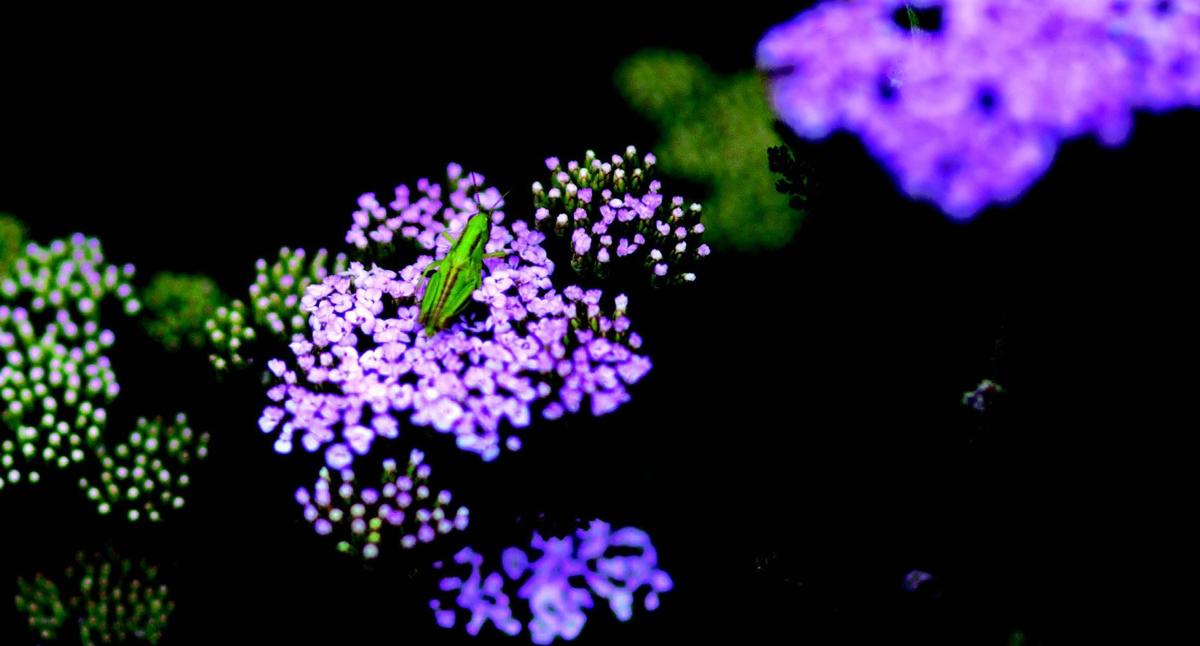 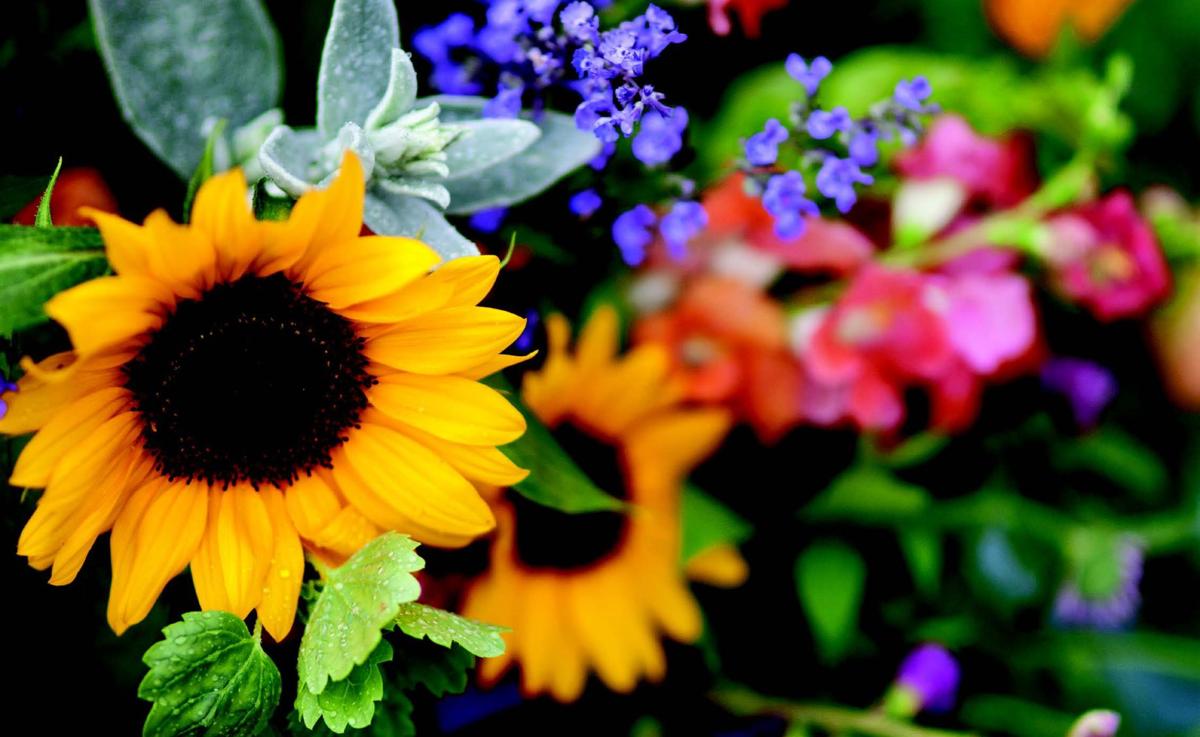 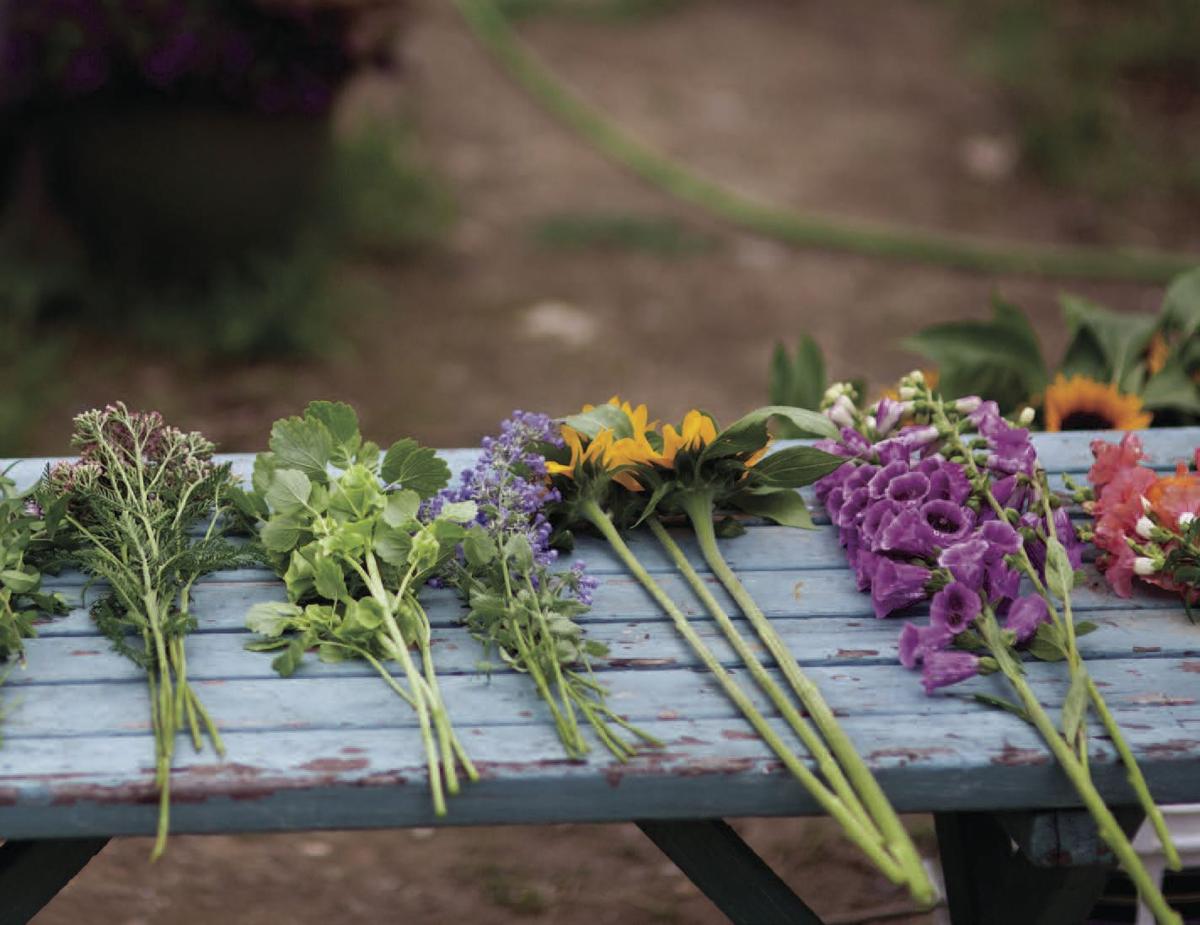 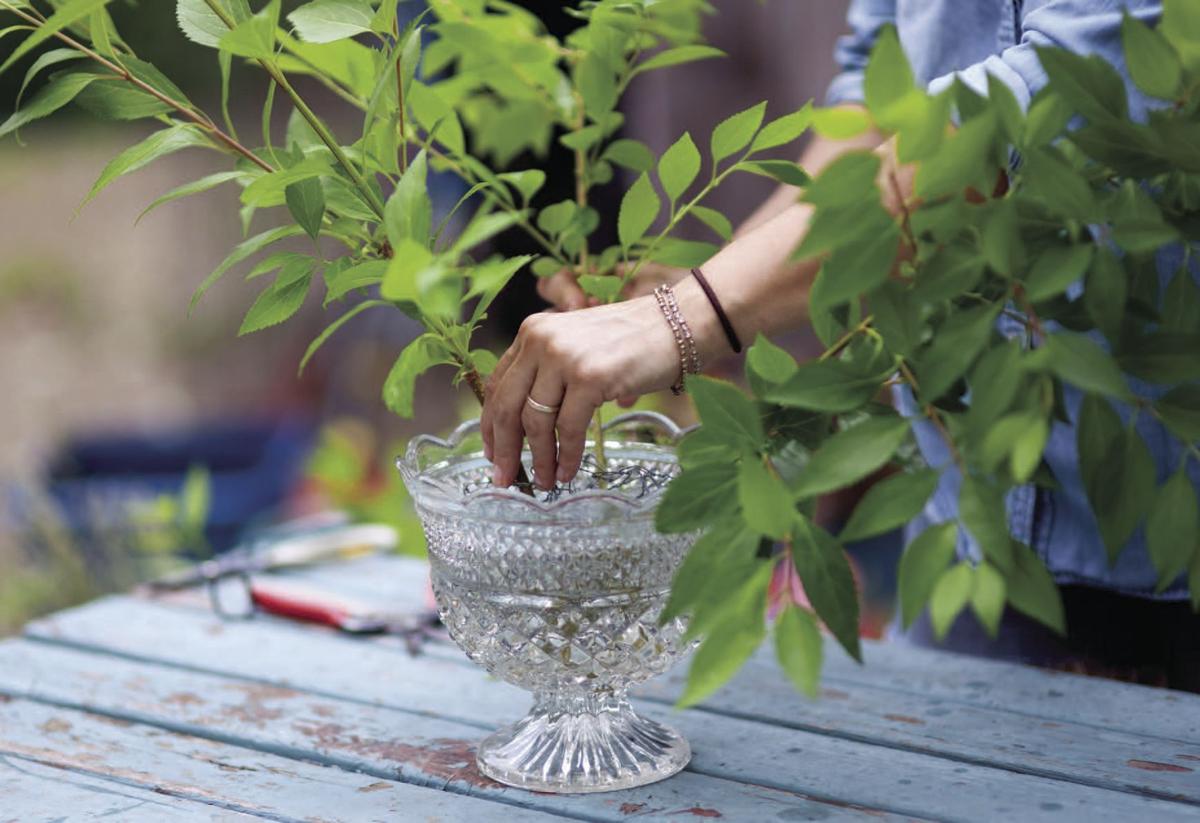 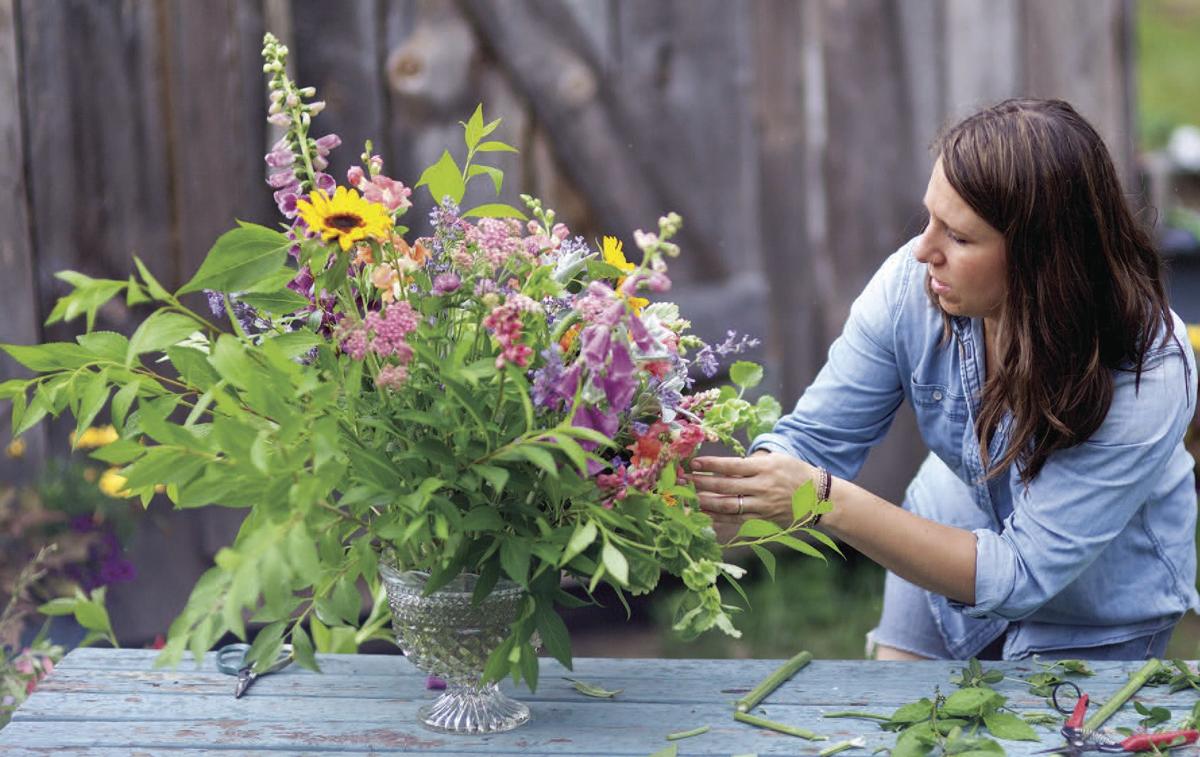 It starts with a ball of chicken wire in the center of a bowl-shaped crystal vase. Forsythia comes next, the summer green leaves proving just as brilliant as the bright yellow flowers that left with the spring. Bells of Ireland and Lamb’s Ear offer a green of a different texture, in the obvious shapes, of course. Tall Foxgloves and Sunflowers bring the eye into focus with contrasting colors and a big presence. After that, Chantilly Snapdragons burst from the center with their gold-pink glow. Then Catmint herb and foraged clover flowers add a touch of magic, and at the end, a single Icelandic Poppy with a slight curve at the top of its stem delivers the whimsy.

It’s a rainbow-watching day at Vera Flora Farm. Sun weaves through clouds and spurts of rain as Sarah Barkhouse (pictured) does some weaving of her own with leaves, petals and stems. Her platform is an old painted wood table set up beside the hoop house where the flower season is lovingly started each year. Thunder rolling a few miles off is the soundtrack as her masterpiece grows in every possible direction with a grace modeled after the garden itself.

“I always want to bring the garden inside,” says Barkhouse.

And that’s Flower Arranging 101, Lesson 1 on this glistening June day.

Vera Flora Farm can be found tucked on a hill just as the road turns to dirt after winding away from Route 10 in Gilsum.

“We moved to this property [in 2016], and before we built the house, it was all woods. So it’s been a lot of work clearing this space and converting it to beds,” says Barkhouse.

Barkhouse explains, “For the sake of our lifestyle with two little kids and [two full-time jobs], we [needed] to have everything here.”

Vera Flora is truly a family affair. Barkhouse, her partner, Vanessa Helgerson and their young children each play a part, including (as you’ll find on their website’s “Get to Know Us” page) that of mini bouquet maker and spontaneous soil taster. The farm even gets its name from the family tree, honoring Barkhouse's grandmother, Vera May, who bequeathed her passion for flower gardening to the next generations.

That passion grew into a business venture at just the right moment according to Barkhouse.

“There is a huge local flower growing movement right now,” she says.

As a member of the Association of Specialty Cut Flower Growers, Vera Flora takes pride in the extended family feel of this movement. When recollecting the endless enthusiastic conversations that tend to happen at the annual ASCFG conventions, she says with a chuckle, “We even sit around talking flowers over our dinner and beer.”

In the spirit of other local farming movements, Community Supported Agriculture and mindful growing practices are happening in flowers, too. In addition to serving customers for a wide variety of events and retailing bouquets at the Monadnock Food Co-op, Vera Flora offers four different CSA share options from June to September each year, partnering with Keene’s Hannah Grimes Marketplace to offer easy pick-up for members.

How the flower garden grows is also a key part of Vera Flora’s service.

Barkhouse says of the farm’s growing philosophy, “We believe that it is important to grow flowers organically, just as it is for all food. We believe that our actions at Vera Flora Farm are connected to the larger world; what we do here indirectly has an affect somewhere else and on someone else.”

It’s awareness like this that brings the family full circle.

Though not an official part of the business, another thoughtful action that Vera Flora Farm brings to the wider community is the spreading of flower joy by way of the occasional flower arranging workshop. And on that glistening June day beside the hoop house, tools of the trade and best kept secrets are revealed in an exclusive step-by-step.

Class begins with neat bunches of greens and flowers laid out on the painted wood table (pictured).

"When your hands are full, and you’re in the middle of what you’re doing, it’s helpful to be able to grab the next stem and keep going,” explains Barkhouse.

The crystal bowl then makes its appearance, one of many non-traditional vessels used in a Vera Flora arrangement.

“Start with a clean vase. Anything that will hold water will do. It’s fun to get creative,” says Barkhouse says.

To the lay person, the next step is far more non-traditional than the bowl-shaped vase.

“One handy little trick is to take a ball of chicken wire and set it down in so it’s not seen, [and] that’s going to give a framework to hold the stems,” says Barkhouse.

After chicken wire comes scotch tape, and the grid for support and shape is in place (pictured).

After the foundation comes imagination in the form of using one type of plant in different ways throughout the growing season. For this arrangement, Forsythia gets to show off its many colors (pictured).

“Everyone knows when it’s in bloom, all yellow and whatnot, but I love it as a greenery,” says Barkhouse. “Then in the fall, the leaves turn burgundy. It’s so nice.”

With the backdrop up, a few sturdy structural flowers are added using the next trick of the trade.

Barkhouse recommends checking stem length and angle from the outside of the vase, then trimming a little at a time to keep the scale in balance.

Following a first check for spots requiring a fuller look, two more types of greenery are added for texture and shape variety, and then it’s time for the focal flowers.

“I’m going to put in my biggest flowers next. These are going to be the ones that grab your eye right away. So, I’m looking at my arrangement, and I’m seeing that here’s a big hole. That might be a spot for my focal flower,” she says.

For a little perspective on symmetry versus artistry, Barkhouse adds, “There is a rule of thumb to work in threes or odd numbers. I also like to put some flowers of the same type in a cluster and then an echo of that [with one flower of the same type] on the other side of the arrangement.”

A few more subtle blooms are the next in line with an important supporting role.

“What we’re getting down to now is our finer textured filler flowers. They’re going to fill in more of the gaps, but they’re not going to catch your eye. They’re really more of an accent.”

As she’s placing accent flowers, Barkhouse looks at the overall contour of the arrangement.

“What I’m doing now is looking for open spaces, but I think it’s okay to have a valley [somewhere] in the arrangement, so I’m not going to fill it in totally. The other thing is you want stems at different depths; you don’t want everything on the same plane. You [also] want some things tucked in and some things popping out three-dimensionally (pictured),” she notes.

Possibly the most surprising secret to learn from a flower farm (and likely a Vera Flora signature move) is the use of plants not cultivated in the hoop house or the garden bed.

“I feel like an arrangement is not really special unless it has forage elements,” says Barkhouse.

For this arrangement, the special forage element is red clover.

In one fluid turn of the vase, the creation is revealed, and Barkhouse gives her work the final once-over. As she does so, she gives one last tip: how to know when you’re done.

“One of the hard things to know is when to quit. I always just trust that I’m going to figure it out. For me, I like a nice balance of greenery to color, and if I kept going it would look less natural. The greenery is what makes it feel like something that came out of nature,” she says.

Sometimes that nature’s touch becomes a wink to the beauty of imperfection. Barkhouse says of that lone Icelandic Poppy (pictured) with the curved stem,

“The curve in this stem is what makes it fun.”

Perhaps that’s the biggest lesson to be learned from a Vera Flora Flower Arranging 101 workshop — for family, for flowers, and for life — always make the finishing touch fun.