You have permission to edit this article.
Edit
Home
Content
Recipes
Advertise
Directories
Contact Us
Find Us
1 of 2 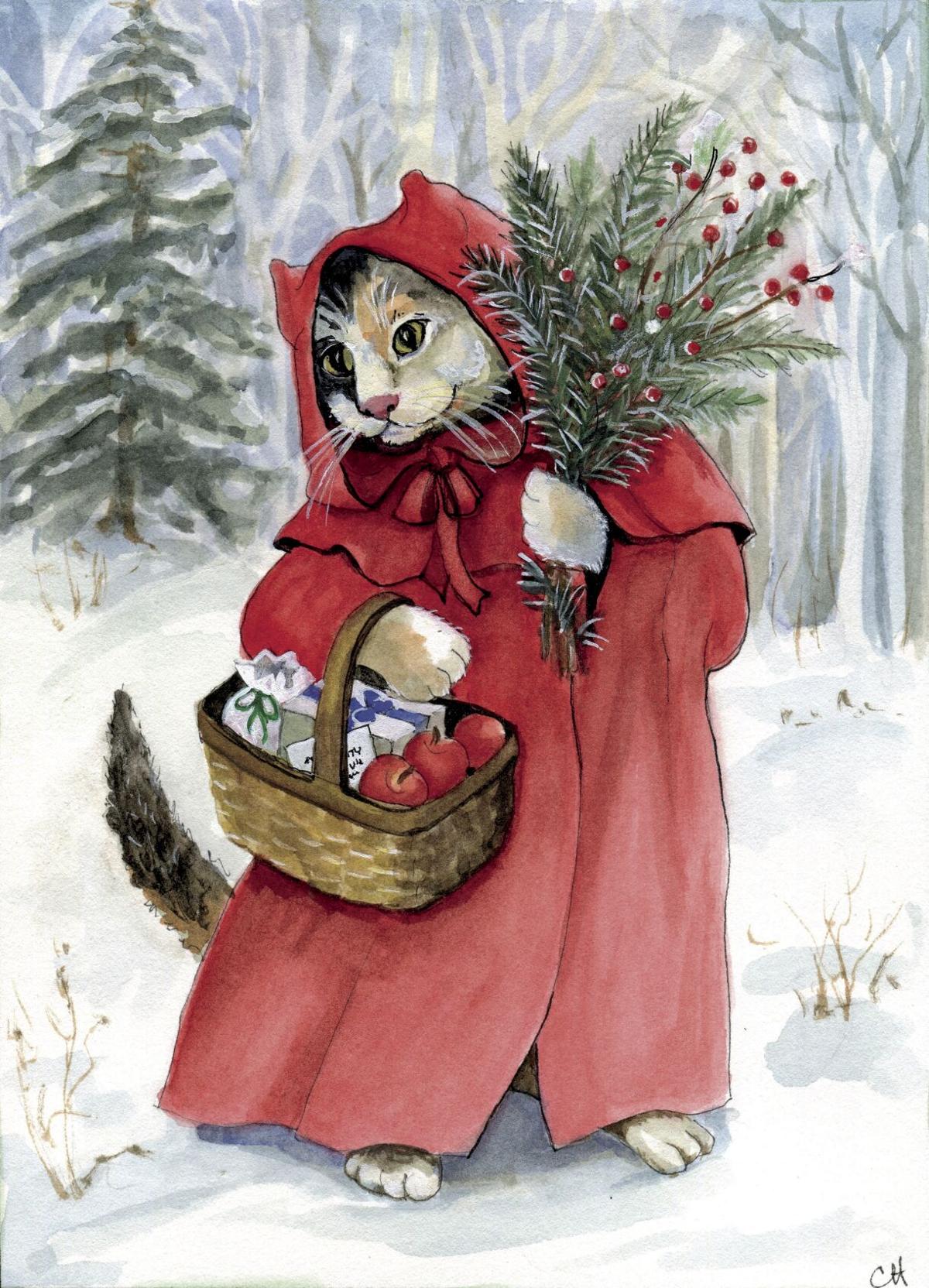 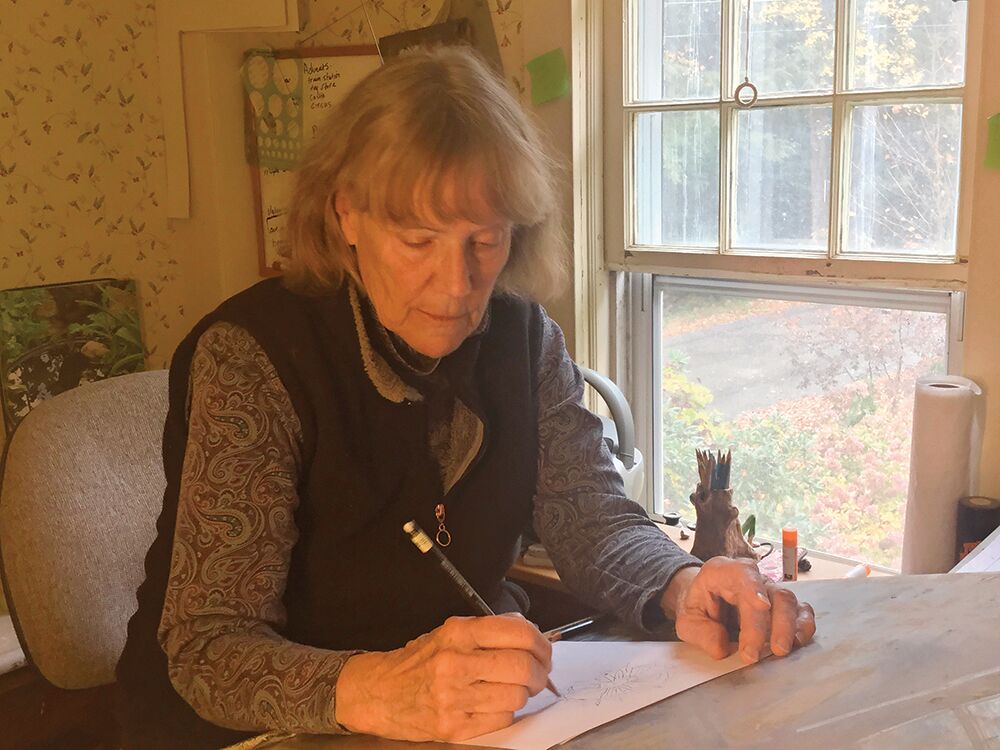 Artist Cindy Hendrick blends watercolors with pen and ink drawings to create cuddly characters in nature-based, nostalgic backgrounds. Her unique, colorful animal images with corresponding captions distinguish her detailed notecard collection from others. Bears, bunnies, squirrels, hedgehogs, foxes and felines are among the many woodland and countryside creatures populating the world of Woodfield Press (LLC), an Alstead, New Hampshire-based company born from Hendrick’s imagination and determination.

“I feel her images are like a portrait of her as a person. Her spirit shines through them,” says good friend Lark Leonard, who has worked with Hendrick in this endeavor from the start. Leonard says she never gets tired of the images, some of which include subtle and playful jokes. (Chester squirrel feasts at a bird feeder.)

A love of gardening, nature and woodland animals inspire Hendrick’s artwork. Spending time in her surroundings, she observes these friends of the forest and field and their quirky behaviors. She also depicts them in New England coastal scenes.

“It’s gratifying that this is sort of like what my dad did,” Hendrick says of the captioned images that remind her of his work as a professional cartoonist. Her mother, too, was gifted with art, and Hendrick began drawing animals as a child.

The small company Hendrick started from her home in 2004, Woodfield Press has grown from humble beginnings with a handful of notecards and a couple of paper doll kits to a business with products in up to 450 stores throughout the US and the ability to print 40,000 cards at a time.

She initially sold her cards through Hannah Grimes Marketplace in Keene, New Hampshire, and then learned business tips from trade show vendors she met. Increased popularity led to greater demand and Hendrick soon needed staff members to help, like Leonard and later, Erin Heidorn, who became the office manager in January 2013, taking on the company’s business end. This allowed Hendrick more time to focus on her beloved artwork. By September 2015, Hendrick and Heidorn formed a partnership and became co-owners of Woodfield Press.

“I couldn’t have picked a more perfect person to work with. She is amazing and makes the job so much fun; she’s just as awesome as her artwork,” says Heidorn.

When the COVID-19 pandemic caused the March 2020 shut-down of many small shops that carry their products, two weeks of having no sales sparked a decision to expand from wholesale only to adding online retail sales.

“Customers had already requested this option,” notes Heidorn, so she knew there was a market for it and reached out through emails and social media platforms, gaining new business.

Employees could continue working during the pandemic thanks to a government PPP loan that Woodfield Press received, Hendrick explains. With challenges, including this one, “You have to learn as the problem arises.”

Hendrick’s earlier work as an occupational therapist in the schools gave her the same vacation time as her growing children. She earned her degree in this field from the University of New Hampshire, a college choice that brought her to the state from her childhood home in New Canaan, Connecticut. While art was not her major, she took as many art classes as possible.

She “wandered back into art” after raising children, creating oil paintings and participating in shows. Yet they required a large time investment with no guarantee of a steady income. She did a stint working for PM Design, a wallpaper design company in Salem, New Hampshire until they relocated to Pennsylvania. It was then that she had the idea of creating notecards.

“I thought about cards as something I could print myself,” Hendrick says.

Working with a small printer and the wrong type of paper brought challenges such as keeping ink from smearing before it dried, but during this trial and error beginning, she gained a sense of whether the cards would sell.

“I chose animal characters mostly because no one else was doing them in a way that I liked,” she notes.

Beatrix Potter, an English artist creating English scenes, was one role model for Hendrick, who was interested in doing something that looked classic, appealing and featured animals fitting naturally into the settings. Some are personified — pushing a wheelbarrow, picking apples and enjoying picnics and parties. Others are depicted engaging in more typical animal behaviors, such as foxes traversing a clearing beneath a full harvest moon.

Seasonal themes are a common thread throughout the notecard collection.

Hendrick explains, “I love seasons and the change of seasons; the things you do during them traditionally and memories of growing up.”

Special occasion cards, such as birthday and Christmas scenes, are the most popular; however, all of the images have their own warm and whimsical appeal.