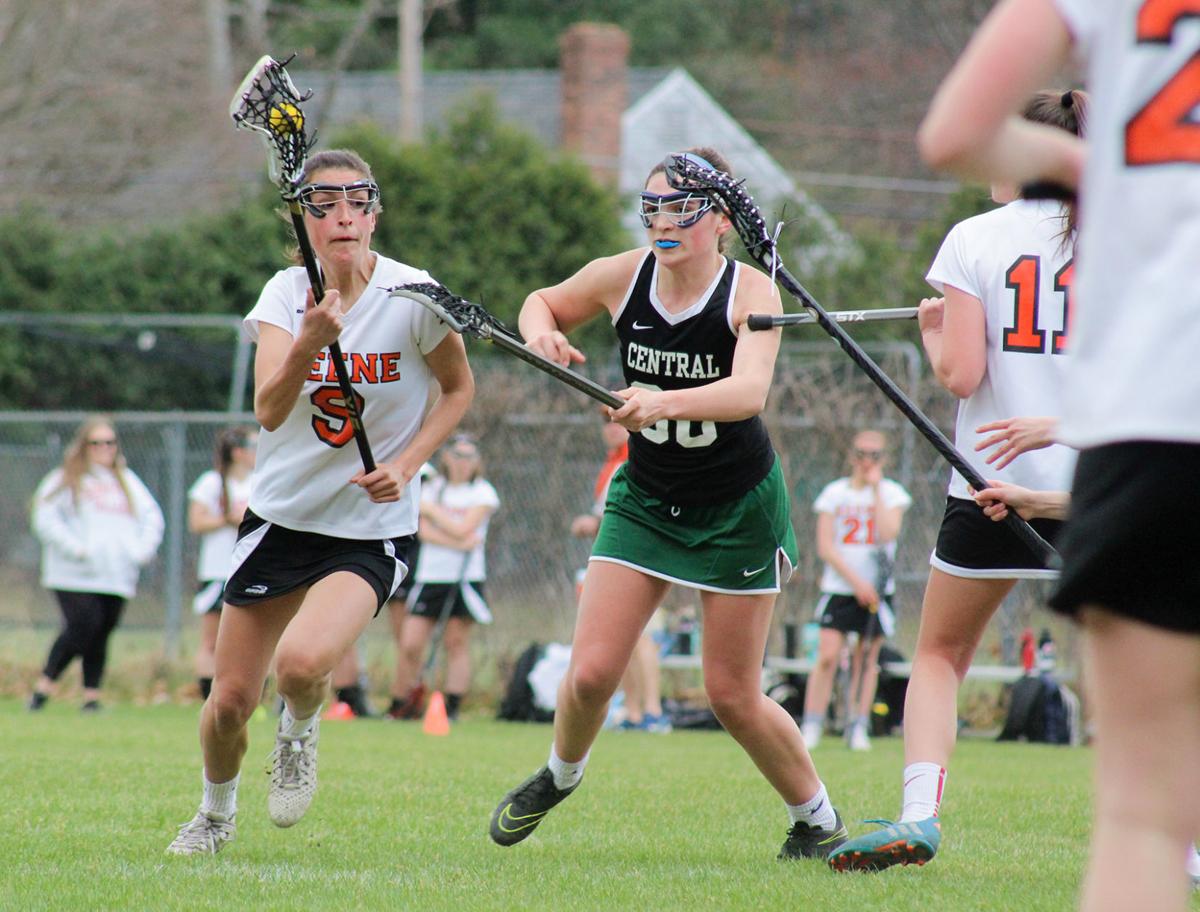 Keene High’s Callie O’Neil shields the ball from a Manchester Central player during a game this spring. O’Neil scored five goals in the contest. 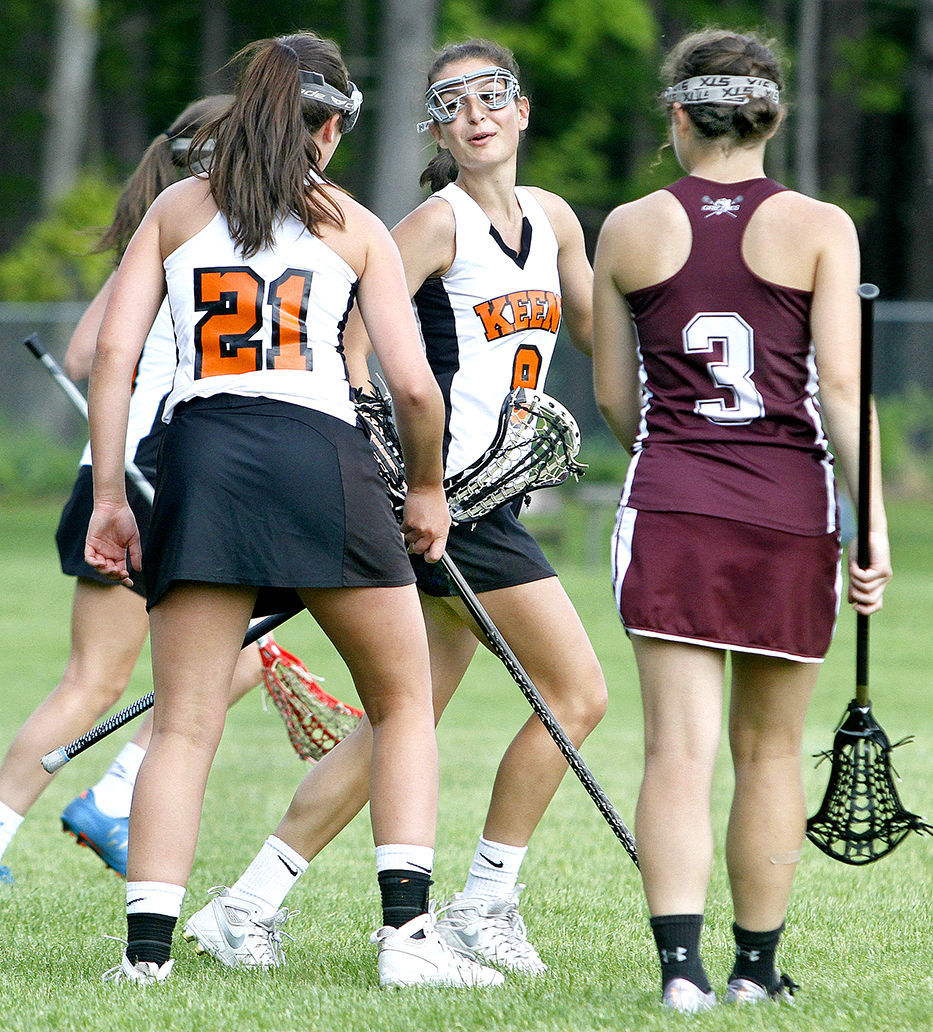 Callie O’Neil, center, celebrates one of her goals in a game against Goffstown this past season.

Keene High’s Callie O’Neil shields the ball from a Manchester Central player during a game this spring. O’Neil scored five goals in the contest.

Callie O’Neil, center, celebrates one of her goals in a game against Goffstown this past season.

Callie O’Neil’s athletic career cannot be distilled to one night, but the consistent athletic prowess she displayed in her four years at Keene High certainly culminated on May 25.

Her night began with the Division I track and field championships at Merrimack High School at 4 p.m. There, she competed in the 100-meter dash, running a time of 13.66 seconds. She was also the starter on the Blackbirds’ 4 x 100 relay team that finished seventh, in 52.61.

She wrapped up at Merrimack around 6:30 p.m., but her night was just beginning.

O’Neil, also a captain on the girls’ lacrosse team, had her final high school lacrosse game in Manchester against Central at 7 p.m.

She arrived just before game time. O’Neil went on to score six goals, all part of a second-half comeback in an 11-5 win to close the season.

After May 25, she stood alone in the record books.

Her six goals in her final game gave her 57 for the season, eclipsing the single-season record at Keene, set by a former teammate, Kaeleigh Lord.

O’Neil finished with 168 career goals, also a school record. She was a two-time first-team Division I All-State selection.

All that while balancing school work and track. She often bounced from practice to practice.

“It was a lot to balance,” O’Neil said. “That was probably the toughest part, working the days out and the stressful moments of getting from one thing to the next. I wanted to have good grades, too, and get into a good college. I just had to stay focused.”

She graduated with a 3.65 GPA and was a member of National Honors Society, Math Team and the Principal Advisory Group.

She will continue to play lacrosse at St. Lawrence University in Canton, N.Y., in the fall.

On the lacrosse field, she dominated not solely on her athleticism, but on her savvy.

“While Callie puts up incredible statistics, she is an intelligent player on the field that makes her entire team better,” said Keene High lacrosse Coach Troy Emineth. “She’s shown she can be successful as both an individual athlete and a team athlete, which is an impressive mix.”

O’Neil’s awareness on the field began to develop at an early age.

The girls around her were bigger and faster. She had to learn the ins and outs to help to adapt to the speed of the game.

“It was certainly daunting; I was tiny,” O’Neil said. “It made it tough for sure, but it made me want to push a lot harder.”

By the time she reached 14, her ability began to catch up.

Her speed was pronounced and allowed her to catch defenders flat-footed with a ball fake before bursting around them.

By her senior year, it was common to see two or three defenders converge on her, only to watch O’Neil maneuver through and emerge on the side.

At the midfield position, her fingerprints were all over nearly every aspect of the game.

She was third on the team with 21 forced turnovers. She also had eight assists, second most for the Blackbirds.

“She is the type of athlete that is very skilled and fluid and a joy to watch in action,” Emineth said.

She played a key role in draw control, she called plays on the attack end and was a go-to for her teammates in transition for her soft hands receiving passes and her buzzing speed.

Her talent shined in the Twin State All Star Game, where she scored a late goal to help New Hampshire to a 17-10 win over Vermont on June 24.

The Blackbirds went 5-11 this spring, missing the Division I playoffs. They finished the season winning four out of their last five games, including the season finale at Central.

Through the trials and tribulations, the double practice shifts, the records and the accolades, O’Neil will remember finishing on a winning note most. She celebrated her crowning moment in a winning setting, with her teammates.

“It’s pretty cool to be able to say that I got the records,” O’Neil said. “But I could not have done any of it without my teammates. Being with them kept me sane. I’ll always remember how happy we were after that last game.”