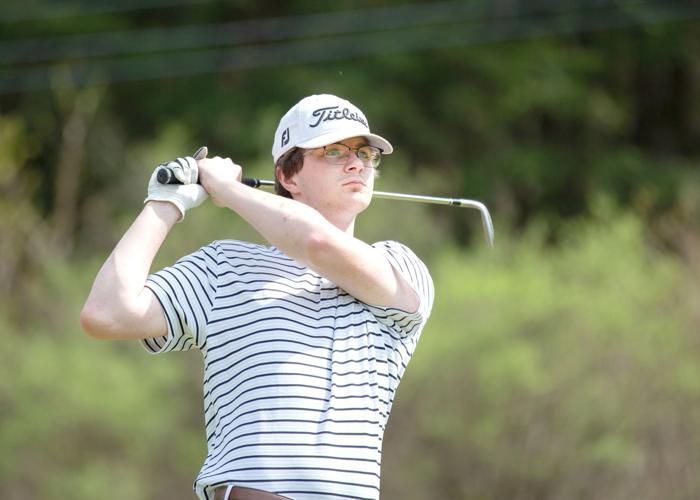 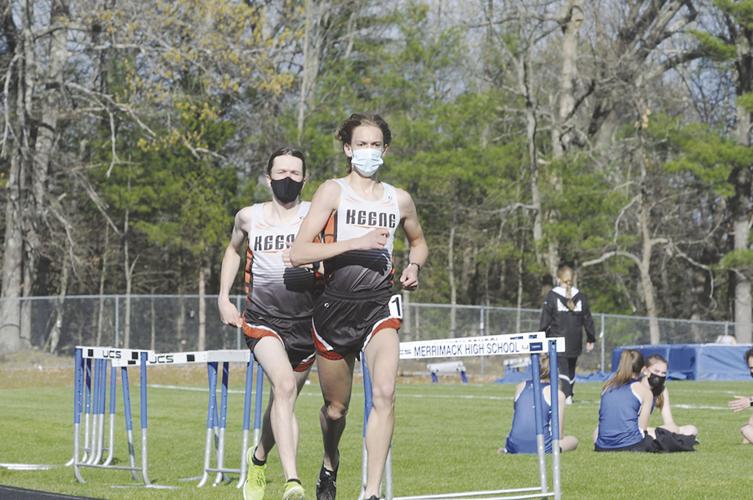 In this file photo from the 2021 spring track season, Torin Kindopp, front, is pictured competing while wearing a mask, as required at times during the COVID pandemic. 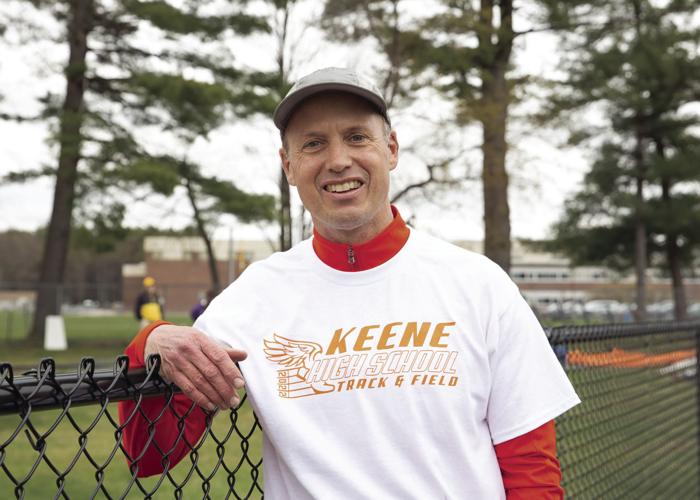 In this file photo from the 2021 spring track season, Torin Kindopp, front, is pictured competing while wearing a mask, as required at times during the COVID pandemic.

Monadnock Regional High School junior Gabe Hill was on the 16th green at Beaver Meadow Golf Course in Concord, playing a practice round with his dad, Jim, when he heard the news.

He was practicing for the Division III individual state tournament — also to be held at Beaver Meadow — which he qualified for after leading the Huskies at the team tournament in mid-October.

The news? The high school announced on Oct. 11 that it was moving to remote learning due to an uptick in COVID-19 cases at the school, meaning — even after competing throughout the entire regular season and team tournament — Hill was not eligible to play in the individual state tournament that weekend.

“I think it was just a shock at first,” Hill said. “There’s not really anything you can do about it.”

Per Monadnock school rules, students cannot participate in extracurricular activities if the school is in remote learning.

“It was just frustrating especially because of all the work you put in during the offseason and throughout the summer,” Hill said. “And to have such a good year like me and my team did, and then to not be able to compete, was frustrating a little bit.”

The Monadnock football team was also not allowed to practice that week or participate in its game against Winnisquam that Friday night, which affected the team’s playoff chances at the end of the season.

Every sport, every athlete was affected by the ever-changing regulations surrounding the COVID pandemic and high school sports.

Track and cross country, in particular, were hit hard. Especially at Keene High.

In the fall of 2021, Keene’s boys and girls cross country teams competed during the regular season (albeit a regionally adjusted regular season with no big invitationals). But ahead of the postseason races, the Keene Board of Education voted to not allow the teams to compete based on the number of COVID cases in the Manchester area, where the races were held.

“Kids immediately felt the loss and felt the earth shift under their feet because they always counted on sports to be there for them … and now that was missing,” said Keene coach Bill Derry, who coaches girls cross country as well as track and field. “It felt like it was taken away.”

For Keene senior Torin Kindopp, not being allowed to run in the postseason meets hit extra hard, as the then-junior was one of the favorites to win a state championship. It hurt even more since Keene was one of the few Division I schools in New Hampshire not allowed to compete.

“A little disheartening at the end, obviously,” Kindopp said.

In the winter of 2021, there was no indoor track season at all, which Coach Derry believes affected the amount of interest in the sport. Even into this year, Derry said numbers have dropped significantly compared to pre-COVID years.

“There’s been less track over the last few years, so there are less kids interested this year,” Derry said. “That can be changed, but it doesn’t happen overnight.”

Even this past winter, there was no NHIAA-affiliated indoor track season, but coaches across the state — including Derry — put together an unofficial indoor track season to give the student-athletes an opportunity to compete. Derry said they put on eight “unofficial club events.”

“It was a lot of work, but very satisfying to do that for the kids,” Derry said.

And the efforts were certainly appreciated by the student-athletes.

“It was very thoughtful of everyone who put their hat in the ring as we came together,” Kindopp said. “It was like, ‘This is what we have, this is what we can offer.’ And it was better than nothing. That’s how we went through the season, and it was fun being back with the team and all.”

Field hockey was another sport significantly affected by Keene High’s postseason ban in the fall of 2021.

There was never a full cancellation of a field hockey season, but the year was changed by the regionalized regular season and Keene was limited to playing teams in lower divisions — or even from Vermont — since Keene is the only local Division I school.

The good news? Keene automatically qualified for the postseason, per NHIAA rules in 2021, and won their first-round matchup. The bad news? Keene could not move on in the tournament because of the school’s COVID travel policy.

“You had girls that have been playing for 13 years, and then it was just all over,” said Keene field hockey coach Michelle Tiani.

After the school board confirmed its decision to limit postseason travel for students’ safety, Tiani had to tell her girls the news.

“I was sitting in my office bawling. I felt defeated,” Tiani said. “[The girls] did everything right. It was heartbreaking — the hardest thing I’ve had to tell them.

“But we tried to use it as a positive for us,” Tiani added. “How many times can you say you won your last playoff game?”

Tiani said her team handled the situation well and the girls were willing to sacrifice and do everything they needed to do to make sure the team could compete in its next game, even during the regular season.

“It actually brought our team closer together,” Tiani said. “They really found that this is what they wanted to do. It made them think about the whole team, rather than just themselves.”

Tiani — also a member of the baseball and basketball booster clubs, and a parent to a Keene High athlete — said she saw the same thing from those teams as well. Team camaraderie naturally grew between the student-athletes.

“Our athletes at Keene High are so strong,” Tiani said. “They just rolled with it. They persevered. Every team I saw — the kids were just doing everything they could. I was really proud to be a coach and parent of a Keene High athlete.”

And — of course — it wasn’t just Keene High that saw an increase in that team camaraderie.

Hill, also a member of the Monadnock boys basketball team, said he noticed an enormous difference in the locker room that even carried over into this past winter season.

“This year’s group especially, I don’t think I’ve been on a team that’s been more tight-knit than this group,” Hill said. “Even outside of basketball, we’re all best friends. Going into this season, the bonding and team chemistry was there even before we stepped onto the floor. So, I think that was a positive that came out of it.”

And for Kindopp, everything that has transpired over the past two years has helped him find his calling.

“For myself, it’s affected me in a positive way,” Kindopp said. “Really made me have a certain outlook on life. … I learned a lot about myself, got into different hobbies. Following that, I was introduced to the Marine Corps.”

Kindopp enlisted in the Marines for aviation mechanics, and is shipping out Aug. 30 on a five-year contract.

“I’ve chosen to do that rather than college, and a big part of that is because of COVID,” Kindopp said. “I realized certain things are once-in-a-lifetime opportunities. … Sure, [COVID] was a horrible, horrible thing, but I feel as though it changed a lot of people in ways that they never would’ve conceived.”