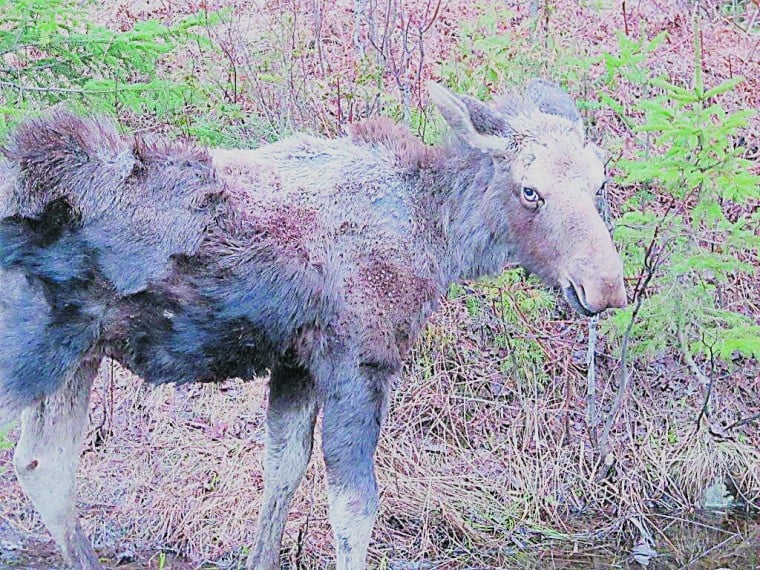 Lisa Hampton took this photo of a young moose in Concord, Vt. The moose apparently has rubbed off much of its fur trying to rid itself of ticks. 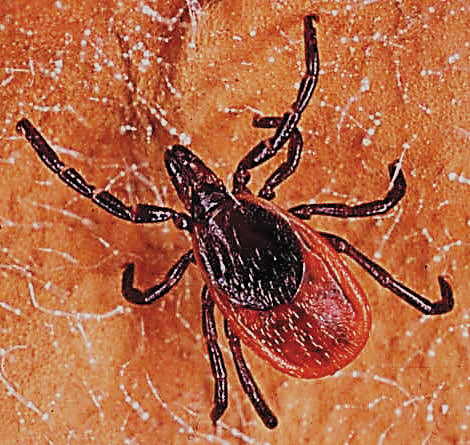 A female adult blacklegged tick.
1 of 2

Lisa Hampton took this photo of a young moose in Concord, Vt. The moose apparently has rubbed off much of its fur trying to rid itself of ticks.

This is shaping up to be the year of the tick, a fatal development for some animals. In some parts of the Granite State, moose are dropping dead, and not because of what’s often called “moose sickness,” a neurological disorder brought on by a parasitic worm that affects the moose’s ability to function normally.

What’s killing them now is anemia — a lack of healthy red blood cells — the result of winter tick infestation.

“It takes a lot of blood out of the moose,” said Ted W. Walski, a wildlife biologist for N.H. Fish and Game in Keene. “Particularly, the 1-year-olds (and younger moose) don’t have the blood volume or body size (to cope with tick infestations), which makes them more susceptible to things like pneumonia.”

As one might imagine, it takes a lot of winter ticks to take down a moose.

Rines said part of the problem for moose is they haven’t had the luxury of evolving over many generations to deal with ticks, the way deer have.

“The white-tailed deer have a tendency to groom them off immediately,” she said. “But it takes thousands of years for that kind of change in attitude, so the moose ignore them because they’re not sure what’s going on.”

Spring is a time of year when moose need rest, which is more difficult to achieve when they’re constantly being bitten by ticks, Rines said.

And it’s not just moose who are suffering this season, according to local veterinarians.

“I do think it’s been a banner year for ticks,” said Dr. Lee A. Pearson, a veterinarian at Cheshire Animal Hospital in Keene. “We’ve seen more this spring than in the past, but it seems that over the last decade, maybe two, that there’s been a gradual increase in their population.”

Pearson, a 29-year veteran of animal medicine, said it used to be rare for him to find ticks on dogs or cats during winter.

“Over the last three or four winters, I’ve had dogs come in with ticks on them,” he said.

While it’s usually only one or two dogs per winter, Pearson said that’s something he never used to see.

Alan Eaton of the University of New Hampshire’s Cooperative Extension said there are 15 species of ticks living in New Hampshire, but the most common, the American dog tick and the black-legged tick, appear to be increasing in certain parts of the state, including Southwestern New Hampshire.

And while he’s not quite sure why the dog tick’s numbers are increasing, he can say what he believes are the contributing factors in the rise of black-legged ticks.

“One thing that helps for sure is making human modifications to the environment,” Eaton said. “Creating a lot of ‘edge habitat,’ for example.”

Edge habitat is any area at the edge of a wooded area where the sun can shine and where dense shrubbery grows, which is ideal tick territory, Eaton said.

“They don’t survive well in open areas at all,” he said. “They prefer thick, shrubby areas.”

Some have theorized climate change could be to blame for rising numbers of ticks, but Eaton is skeptical of that assessment.

“My guess is, if they are (affected), then those effects are subtle,” he said. “Other things we’re doing to the environment are much bigger.”

Whatever the cause, veterinarians agree ticks are thriving more than ever before.

Gode, who also works as a wildlife rehabilitator in Winchester, said smaller mammals such as raccoons and skunks are also susceptible to tick infestations when populations are as high as they are this year.

Like Pearson, Gode has seen a spike in tick populations in recent years, with more cases of Lyme disease resulting.

“Lyme disease originated in Connecticut,” she said. “Now it’s all along the Eastern seaboard.”

Walski pulled three ticks off his dog in four days two weeks ago, he said.

“It’s a little earlier than normal for that,” he said.

As for moose, it’s not the first time their numbers have dipped due to ticks, Rines said.

“There was a really bad worldwide die-off back in 2001,” she said. “Of the collared moose in New Hampshire, 75 percent of the calves died. Cows lost 20 percent of their population as well.”

The good news for moose is that they’re nearly as resilient as the ticks themselves, Rines said.

“They rebounded quite easily,” she said. “It’s a pretty simple thing to recover from when it’s mostly calves that are affected; it’s when you have a few years in a row like that where it can become a problem.

“The big question for moose is how this year will play out,” she said.

TODAY is the last day to enter!