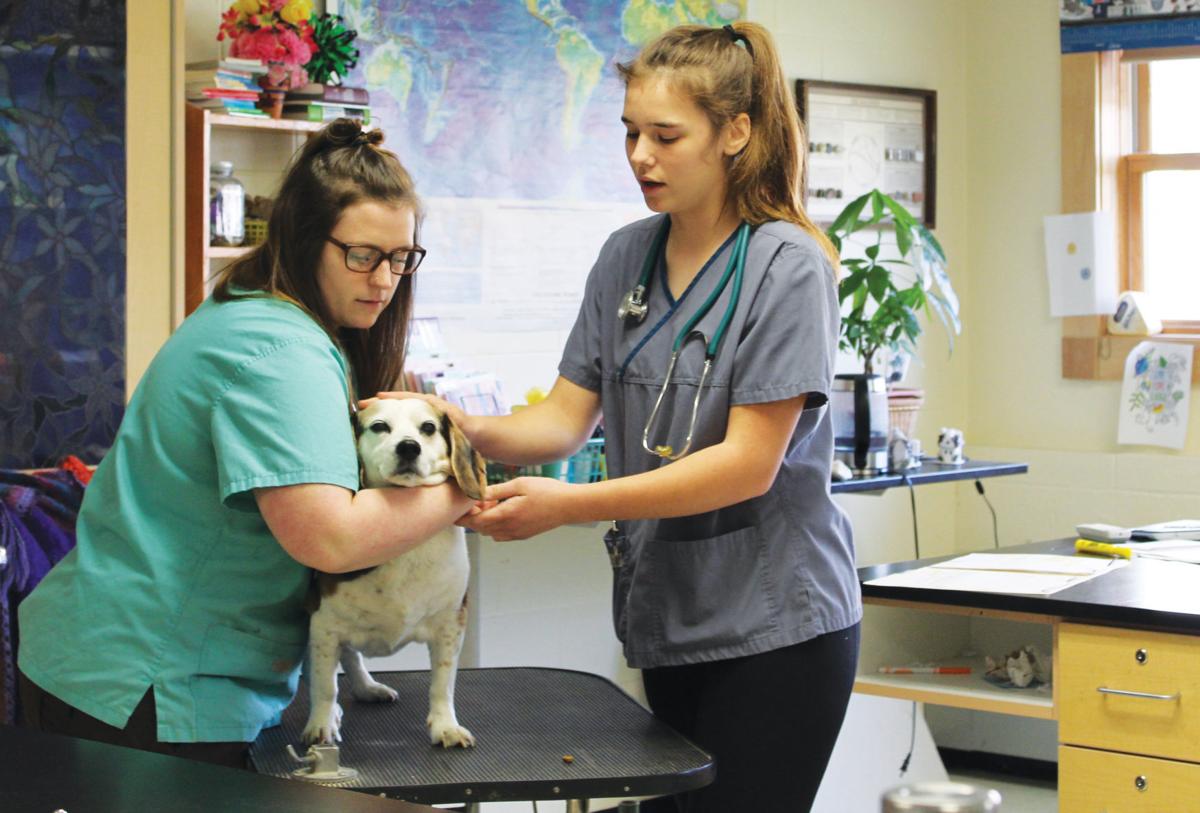 Hinsdale High junior Kelsi Clement, right, shows how to examine a dog’s head and ears during her Exhibition Day demonstration. One of her mentors, Ariel Porter, a veterinary technician at Westminster Animal Hospital, helps out at left. Below, junior Zachary Gassett explains how a water pump works on a Hinsdale Fire Department engine. 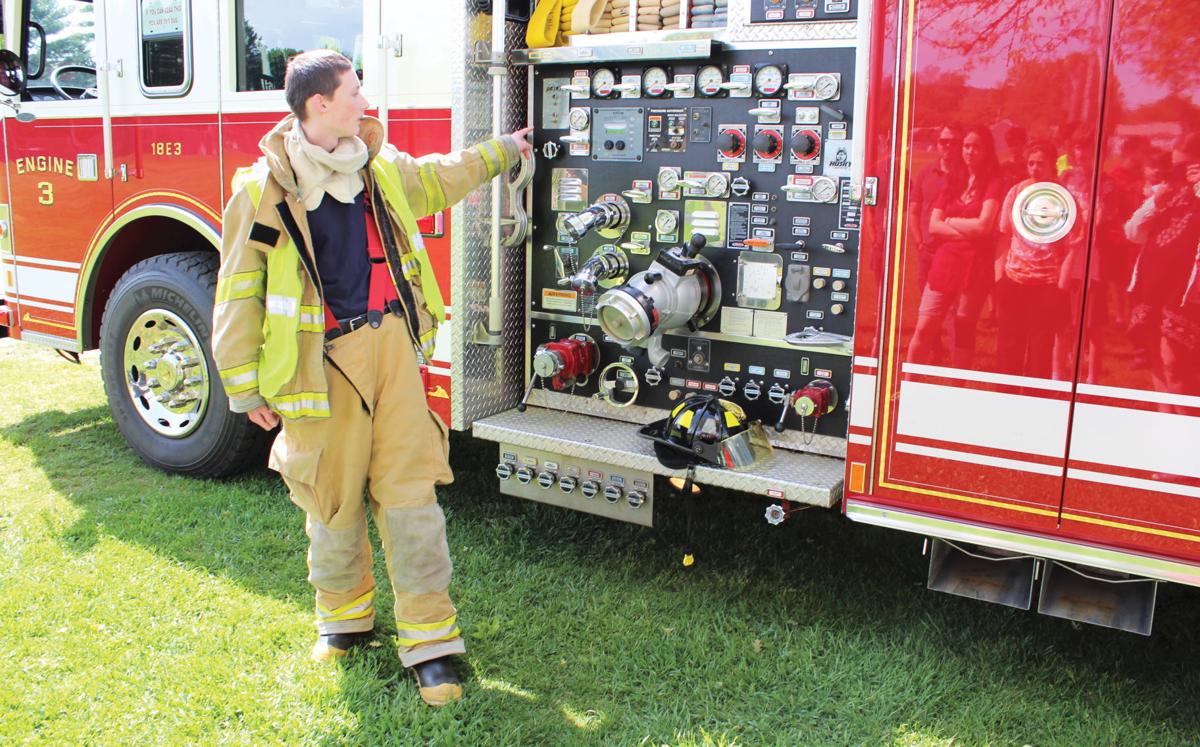 Hinsdale High junior Kelsi Clement, right, shows how to examine a dog’s head and ears during her Exhibition Day demonstration. One of her mentors, Ariel Porter, a veterinary technician at Westminster Animal Hospital, helps out at left. Below, junior Zachary Gassett explains how a water pump works on a Hinsdale Fire Department engine.

Walking around Hinsdale High School earlier this month, you might have seen a few unusual sights — perhaps a dog in the hallway, a fire engine in the back field or a collection of plants near the entrance.

That’s because May 18 was ELO Exhibition Day, a day for students to present what they’ve learned through the school’s Extended Learning Opportunities Program. The program connects students with community partners for real-world learning experiences in and out of the classroom, offering academic credit for internships, apprenticeships and independent study courses.

On Exhibition Day, students gave a 45-minute presentation about what they learned, often including a demonstration of some of the skills they acquired.

Kelsi Clement, a junior at the high school, completed her ELO at the Westminster Animal Hospital in Vermont, where she experienced what it’s like to work as a veterinary technician.

On Exhibition Day she demonstrated how to do a comprehensive exam on a dog, and spoke about her experience observing surgeries at the veterinary clinic.

She said the program helped her decide to pursue a career in veterinary medicine. This summer, she will attend a pre-veterinary program at the University of Massachusetts working with large animals, and next year, she plans to continue working at the clinic — but with a different focus for her ELO.

“I’m gonna look at a different area, because my essential question this year was, what are the basic skills I need to work in a vet clinic? But next year it could be the different rooming types and what a clinic needs to make the animals feel comfortable,” Kelsi said. “So then I could present, maybe if I want to build my business, how I would set up my clinic for the animals to be more comfortable.”

For other students, the ELO program can be a good way to find out what they’re not interested in pursuing after high school. That was the case for senior Mariah Nichols, who spent her ELO working at Kathryn’s Florist and Gifts in Winchester.

Through the ELO she learned skills like plant identification, floral and plant care, floral design and organization. And though she’s decided not to become a florist, some of those skills — especially the social skills she built — will still be useful going forward.

Mariah now plans to attend the University of New Hampshire studying nutritional science, and is also interested in agriculture and agribusiness.

When it comes to the success of the program, the students point to two very important people: Karen Thompson, the school’s ELO coordinator, and Cathy Johnson, the ELO program assistant. Though she’s unlikely to take the credit, Thompson has been a driving force behind building the program; she was named this year’s New Hampshire ELO Coordinator of the Year.

“It’s so clear that it’s part of our culture now,” Thompson said on Exhibition Day. There are 56 students interested in participating in the program next year, which she estimates is about 60 percent of eligible students.

And educators across the state are taking note. This year’s Exhibition Day was attended by several representatives from other school districts, as well as Christine Brennan, the state’s deputy commissioner of education.

Brennan said she was impressed by how eloquently the students spoke about their ELO experiences, and the range of skills they learned — from technical competencies to social awareness skills.

“I was able to go to six or seven presentations and hear the kids be so highly engaged and so knowledgeable about their content and the subjects that they chose,” Brennan said. “And, to be so brave and courageous to share in front of groups of 20, 25 and 30 is not always easy.”

The state is trying to emphasize work-based learning and extended learning opportunities by recognizing businesses who partner with schools, as well as educators who are leading the charge.

And Hinsdale is a great example of what’s possible, she said.

“There are schools that are taking this on. It’s just that Karen has been really instrumental in making sure that this initiative moves forward,” she said. “And I think that this town in particular really has the support of their school board and their community members.”

What’s going on in your school? Let us know! Education reporter Meg McIntyre can be reached at 352-1234, extension 1404, or mmcintyre@keenesentinel.com.