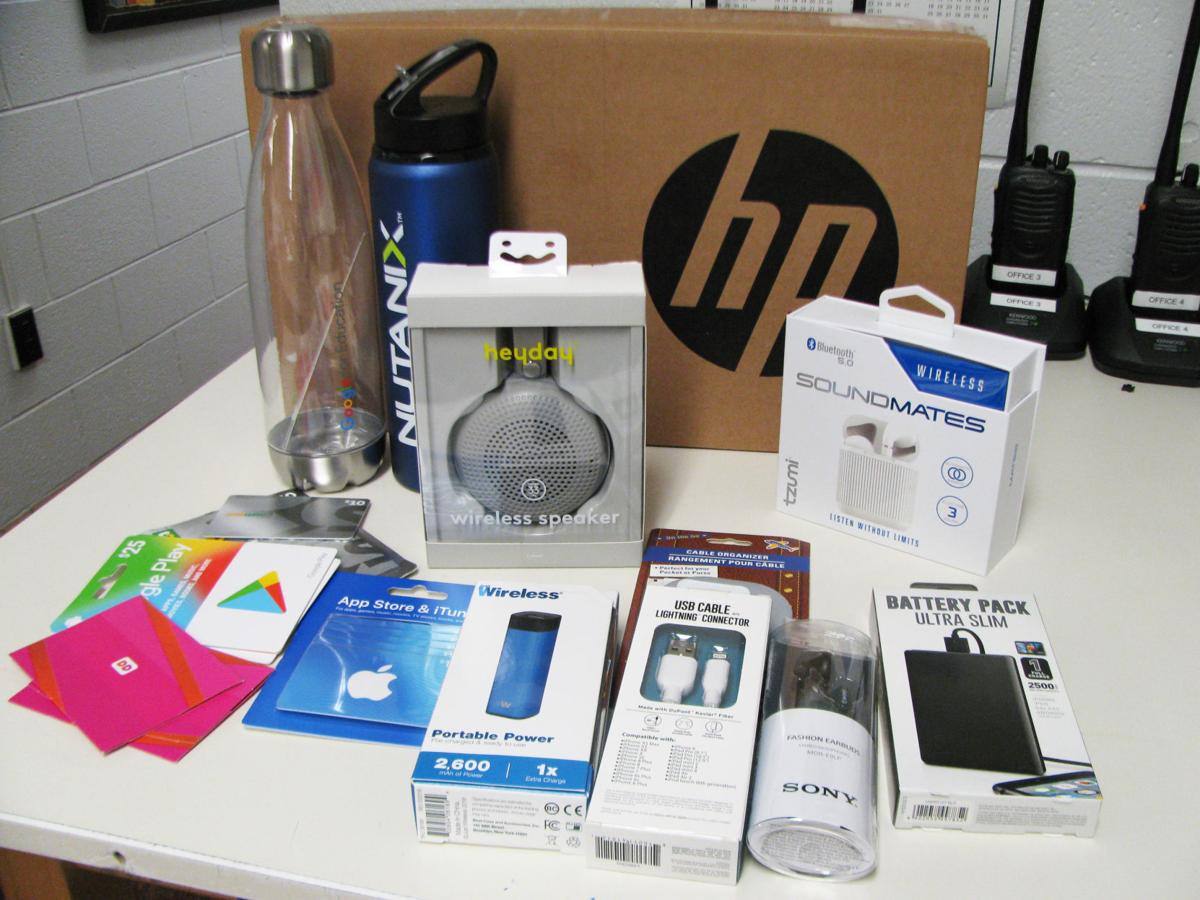 Some of the prizes Fall Mountain students can win if they turn in their cell phones for a school day. 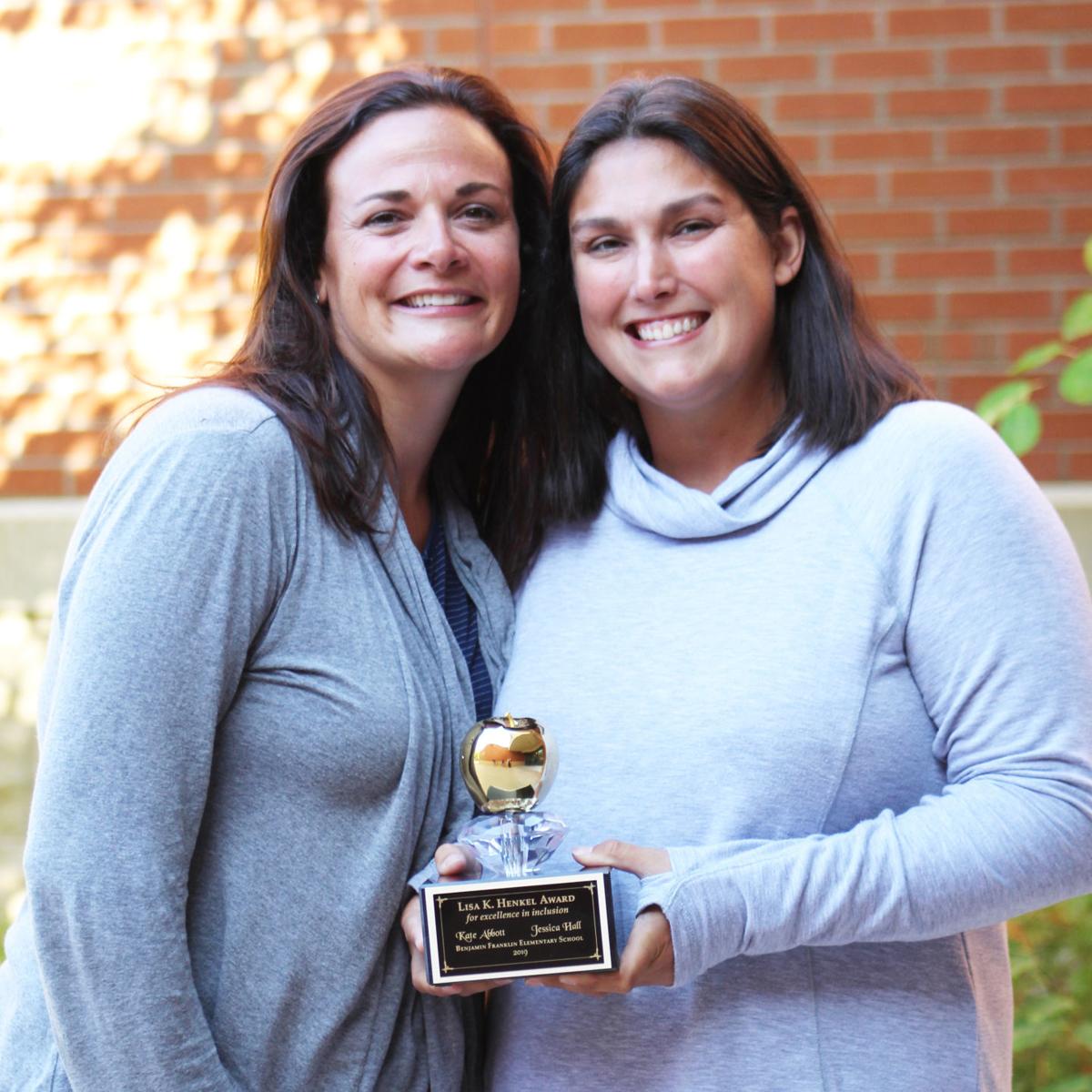 First-grade teachers Katharine Abbott, left, and Jessica Hall were the winners of the 2019 Lisa K. Henkel Award for Excellence in Inclusion.

Some of the prizes Fall Mountain students can win if they turn in their cell phones for a school day.

First-grade teachers Katharine Abbott, left, and Jessica Hall were the winners of the 2019 Lisa K. Henkel Award for Excellence in Inclusion.

This year, Fall Mountain Regional High School is trying something new to encourage students to put their phones away during class — offering prizes for those who voluntarily give them up.

Assistant Principal Heidi Gove said she came up with the challenge after seeing that students were regularly becoming distracted by their electronic devices in the classroom.

“Obviously we’re an educational facility, and our first obligation is to educate. And that doesn’t just have to do with math and English and those kind of things,” Gove said. “It has to do with life choices and appropriateness and all kinds of things.”

The idea of the challenge is to encourage a positive behavior, rather than punishing a negative one, she said, and to help students understand that there is a “time and place” for using their phones.

“I feel if I challenge them in some way, they might be able to have fun with it, while at the same time learning that, ‘Hey, I can go through a period of time during the school day without my phone and be okay,’” Gove said. “And I joke with them, well you can still breathe if you don’t have your phone.”

Students who leave their phones in the main office until the end of their day are entered into weekly drawings for prizes such as gift cards, wireless speakers and earbuds. For every five times they hand in their phone for the school day, they’ll be entered into a drawing for the grand prize that will be given out at the end of the semester, a new Chromebook that was donated by one of the school IT department’s vendors, Gove said.

An average of about seven or eight phones have been turned in per day, Gove said, with some students turning in their phones every day to earn more entries into the drawings.

She said the school has also seen a decrease in phones being confiscated by teachers this year, though she’s not sure what’s causing that dip. So far, only one confiscated cell phone has been turned in to her, she said, compared to a half a dozen by this time last year.

Some students may have only turned their phone in once, but whether it becomes a regular habit or not, it’s still a valuable experience for them, she said.

“We’ve had a couple of kids try once and say, ‘You know what, that was the hardest thing I’ve ever had to do, but I did it.’”

Katharine Abbott and Jessica Hall, both 1st-grade teachers at Franklin Elementary School in Keene, have been named the honorees of the 2019 Lisa K. Henkel Award for Excellence in Inclusion. Presented by N.H. School Administrative Unit 29 and the Concord-based Parent Information Center, the award recognizes a classroom teacher or teaching team in Unit 29 that has demonstrated dedication to the inclusion of students with disabilities.

Richard Matte, director of student services in Unit 29, said in a news release that the school introduced a new academic support model last year in which special educators and paraprofessionals were brought in to regular classroom instruction, with the hope of including students with disabilities even more.

“This delivery model took a concerted effort of common planning, differentiating instruction and creating alternative learning spaces in the regular classroom,” Matte said. “Some teachers even went to the extent of sharing lead teaching responsibilities, planning and providing intervention for the neediest students and co-planning core instruction. This took a tremendous amount of daily communication and a commitment to consistent planning.”

The award is named in memory of Lisa K. Henkel, an adaptive technology assistant at Keene State College who created learning materials to accommodate blind students in music, mathematics, science, foreign languages and other areas. It includes $2,000 in classroom supplies.

“We are extremely grateful to be recognized for our hard work to include all students into the first grade classroom,” Abbott and Hall said in the release. “Although the year was full of challenges, the benefits of academic and social growth of the students far outweighed the hardships. We could not have done this without teamwork and the dedication of our esteemed paraprofessional, Zola Luebkeman. We cannot thank the Henkel family enough for honoring us with the Lisa K. Henkel Award.”

High school credit offered through chorusMonadnock Region students can now gain high school credit for their participation in the Peterborough-based Monadnock Chorus. Students in public school, private school and home education programs are eligible for the credit through the state’s extended learning opportunities program, which offers credit for personalized learning experiences such as internships, apprenticeships and independent study courses.

“[This program] is designed to give young singers the chance to perform large choral works often with full orchestral accompaniment. Very few students have this opportunity — I certainly didn’t as I was growing up,” said Chet Bowles, a member of the chorus’ board. “Being able to offer the students a way to receive credit is an added incentive which we hope will encourage more young people to join the Chorus.”

To participate, students must attend regular Monadnock Chorus rehearsals and participate in performances, as well as keep a weekly journal to document their activities with the group. Each student will also be assigned a mentor in the chorus who currently holds a teaching certificate or has held one in the past.

For more information about the Monadnock Chorus or its extended learning opportunities program, visit the chorus website at Monadnock-Chorus.org or send an email to MonadnockChorus@gmail.com.

Maddox Miller, a 5th-grader at James Faulkner Elementary School in Stoddard, was a winner in the Savings Bank of Walpole/Walldogs coloring contest, donating $250 to his school. Children were asked to color a depiction of the railroad mural designed by Walldog Mike McEvers that was painted during the Walldogs festival in Keene in June. Maddox won a toy train and could also choose a nonprofit or school where he’d like to donate the $250 prize from the bank. The school plans to use the funds for a 5th-grade field trip, but hasn’t yet coordinated details for the trip.

What’s going on in your school? Education reporter Meg McIntyre can be reached at 352-1234, extension 1404, or mmcintyre@keenesentinel.com. Follow her on Twitter @MMcIntyreKS.