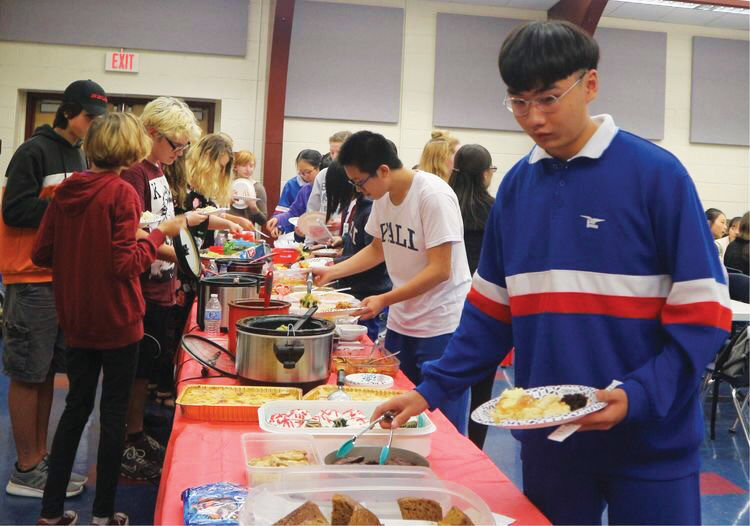 Students from Keene High School and the Nanya School in China enjoy a potluck luncheon together at the Keene school last month. Below, students learn a Chinese dance together in the Keene High auditorium. 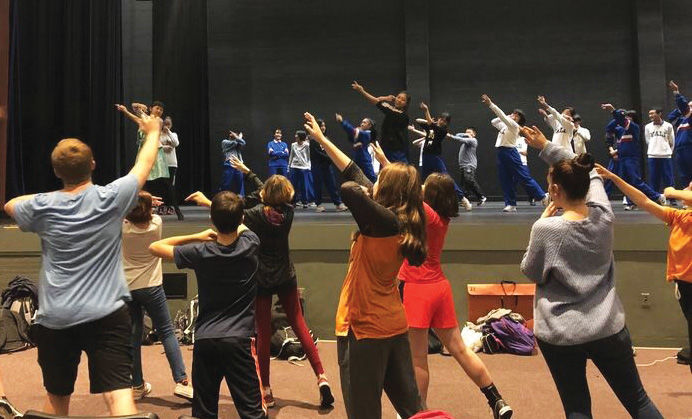 Students learn a Chinese dance together in the Keene High auditorium.

Students from Keene High School and the Nanya School in China enjoy a potluck luncheon together at the Keene school last month. Below, students learn a Chinese dance together in the Keene High auditorium.

Students learn a Chinese dance together in the Keene High auditorium.

Last month, Keene High School hosted 20 students, three teachers and one group leader from the Nanya School in Changsha, a city in the Hunan province of China.

An exchange group from Nanya School visits Keene High every year around October, while Keene students travel to China once every other year, according to Nanjiang Hyde, the Chinese teacher at Keene High. The high school’s next trip is scheduled for April 2019.

Over four days at the beginning of October, the Chinese students stayed with host families in the region and joined activities at Keene High, including a welcome ceremony and potluck lunch attended by high school Principal James Logan and Superintendent Robert Malay.

Hyde said in the past the potluck has been an event just for the visiting students and their host families, but this year her students came up with the idea of including the entire Chinese program and inviting other school representatives.

“So I told them, I’m so proud of you guys — you helped me change the tradition,” Hyde said.

For students in Hyde’s Chinese I class, hosting the exchange students was an opportunity to get a look into another culture.

“... With those students it really opened my eyes to how big the world actually is and how many people there actually are in it,” said Adiana Hammons, a freshman in the class. “It was really amazing.”

To greet their guests, the Keene High students learned a Chinese folk song called “Jasmine Flower” to perform during the welcoming ceremony, Hyde said. Two students from the Chinese I class accompanied the song on violin.

Between the school’s Chinese classes and Chinese club, about 50 students are involved in the Chinese program at Keene High, according to Hyde. Several students said they chose to learn Chinese because it’s an option that not all schools offer.

“For me, I’m hoping to be a hyperpolyglot in my life,” said senior Elizabeth Squires, referring to the term for a person who speaks dozens of languages. “So for me, I was already taking Spanish here and it was my senior year, and I thought, at some point I’m planning to learn Chinese, so why not try it now?”

Brenna Erickson, a senior in the Chinese I class, is one of the students who will travel to China in April. When the exchange group visited in October, Brenna said she was interested to learn about the school system in China. She learned that students attend classes for 10 hours a day, six days a week, she said.

“I think having a class and a department like Chinese is really important,” she said, “because in a lot of schools you don’t get that chance to hear or learn about culture and language from Asia.”

Jaffrey-Rindge Middle School’s annual Turkey Trot run around the school’s athletic complex and playing fields is scheduled for Monday at 1 p.m. Students are asked to bring in at least one non-perishable food item, such as canned food or vegetables, pasta, soup, or peanut butter, that will be donated to food pantries in Jaffrey and Rindge. Last year, the school donated more than 1,100 pounds of food.

Staff and teachers in the Keene School District as well as a Girl Scout troop from Fuller Elementary School received Star of Sustainability training at Symonds Elementary School in September through the Northeast Resource Recovery Association, where they learned how to collect data needed to evaluate a school’s recycling program.

The association has partnered with the district and the city’s public works department to provide training and equipment to enhance their recycling efforts, according to a news release from the association.

After a presentation, attendees participated in a walk-through of Symonds to learn how, where and when the school is recycling; information about the size and pickup frequency of waste and recycling dumpsters; food waste collection; signs and recycling celebrations.

After the training, they were asked to return to their schools and begin collecting data to report back to the Northeast Resource Recovery Association, which will be used to develop reports for each school and compare them to previous data.