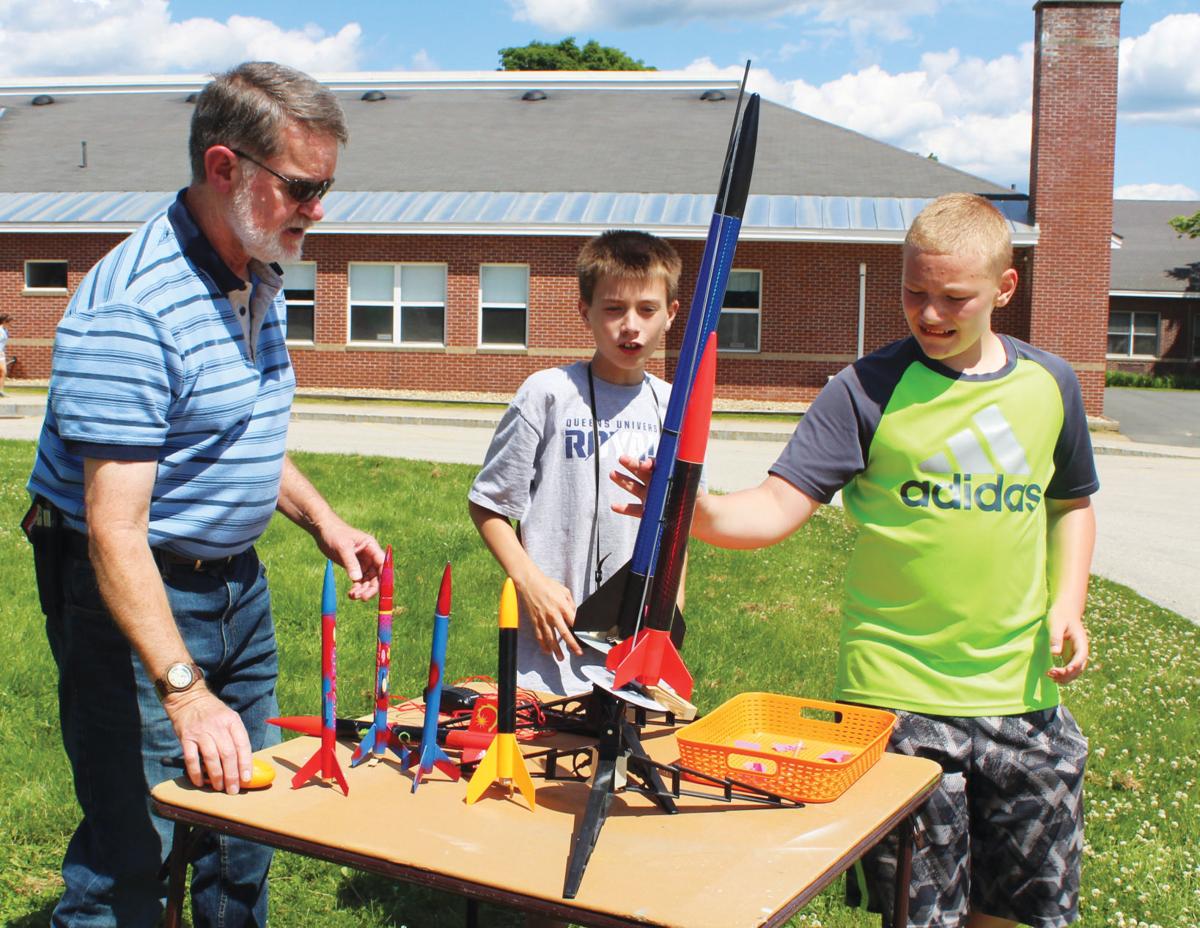 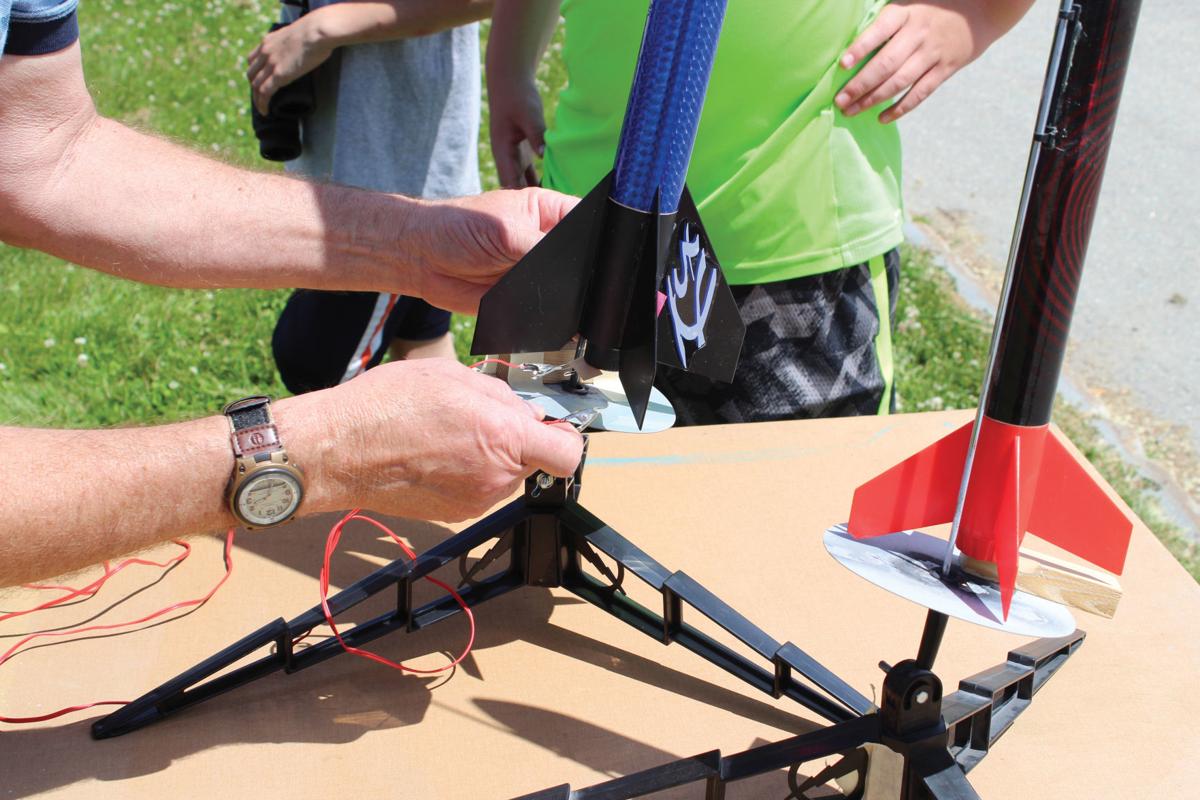 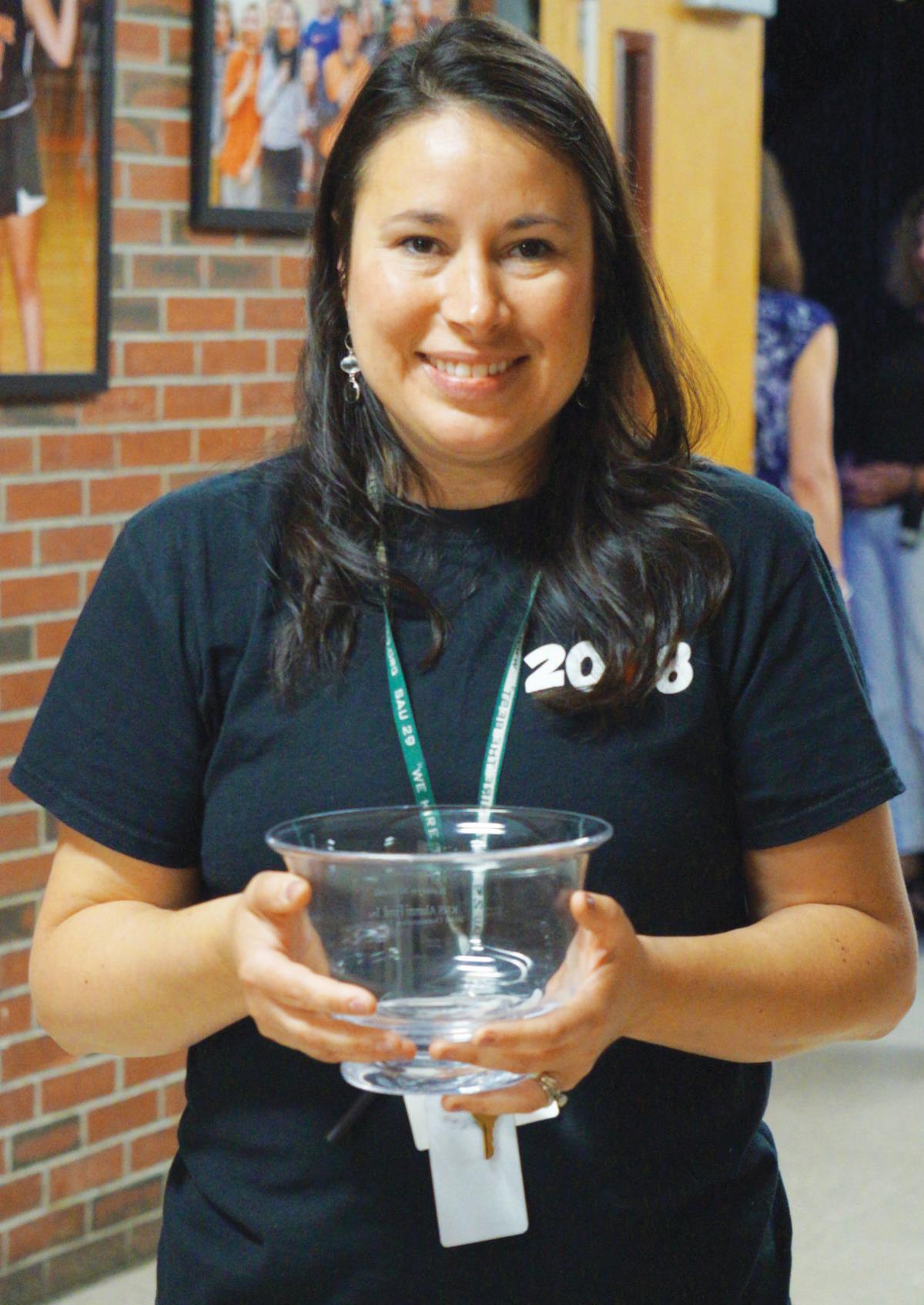 On Monday, students at Chesterfield School celebrated the end of the school year with a bang.

Or perhaps more of a whoosh. At the elementary school’s field day last week, students in the Chesterfield Rocket Club launched some of the creations they’ve been working on over the past six weeks for all of the school to see.

The club is in its second year and has so far received funding from the Friends of Chesterfield School parent-teacher organization, said Chris Nelson, the club’s leader and the school’s psychologist. Since spring break, the students have met for an hour and a half each week to construct the rockets, cutting out balsa wood fins, attaching parts and painting them.

Daniel Smith, a 5th-grader in the club, said he’s learned a lot about rockets this year. It’s important to be patient and follow the steps to assemble your rocket correctly, he said.

“If you do one bad step wrong you can ruin it,” he said.

Nelson said the club has been a way to get students involved in STEM (science, technology, engineering and math) topics. He remembers participating in his own rocket club as a child.

“Many of us (parents and educators) are concerned that our children are spending too much time playing video games and on social media,” he said. “At the same time, we need to provide an alternative that’s interesting and fun.”

The launches were a spectacle for the whole school Monday, with excited students shouting out countdowns before each rocket was launched. Members of the rocket club tested the wind direction by throwing grass into the air, and then tracked the trajectories of the rockets so they could retrieve them after each launch.

Third-grader Braxton LaCroix said his favorite part of rocket club is “that you get to use walkie talkies, you get to see where the rockets go and you get to actually get them.”

For Ethan Harris, a 5th-grader, the best part is watching them launch.

“It’s adrenaline-rushing,” he said. “It’s cool to see how high it goes, and then there’s powders that come out the bottom of it.”

Nelson counted Monday’s launch as a success, especially considering that more of the school’s students were able to learn about the rocket club.

“I worry about where our scientists are going to be coming from in the future if we don’t provide opportunities like the rocket club for our students,” Nelson said. “I had 2nd-graders coming up to me yesterday asking if they could be in the club next year — very cool.”

A sophomore at Conant High School in Jaffrey has decided to give back to his former elementary school as part of his Eagle Scout service project. Trevor Pierce, a member of Boy Scout Troop 8, transformed an old garden bed at Jaffrey Grade School into an outdoor education learning center.

He began working on plans for the project in November, and coordinated with the school’s principal, Susan Sarles, and the district’s facilities manager, David Reilly, to prepare his proposal before bringing it to the school board.

Trevor also worked with local businesses to raise donations for the center, coordinated volunteers, and organized three days of construction to install stumps and plantings in the space.

The project was completely funded by donations.

“Having gone to JGS this is more than an Eagle Project to me. It is a way to give back to a school that gave me a great education,” he said.

Katelyn Schmidt, a world language teacher at the high school, is this year’s recipient, and the 19th teacher to be recognized.

The award annually honors educators who are making an impact on youth in the Keene community by setting high standards of excellence. Each year, students, faculty, staff and support personnel submit nominations for the Outstanding Educator Award.

“I’d taken classes in middle school but didn’t find my love for it until I had her freshman year. Her passion for teaching and the language makes the class so different than any other I’ve taken. Her personality shines through her teaching and she makes it fun to learn.”

As this year’s honoree, Schmidt received an engraved crystal bowl and a financial award.

Education reporter Meg McIntyre can be reached at 352-1234, extension 1404, or mmcintyre@keenesentinel.com.