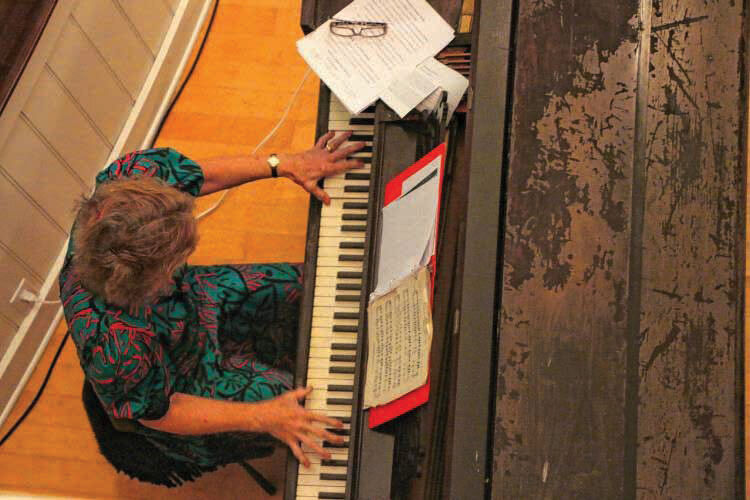 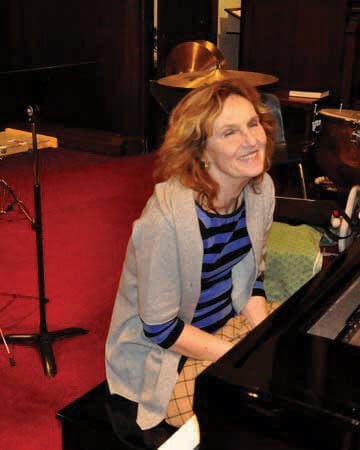 Virginia Eskin has always stood out in a crowd.

At a very young age, the San Diego native had already been deemed a piano prodigy, playing everything from ragtime tunes to flamenco to classical pieces.

Not only did she already have professional-level piano skills as a child, she already had the “it” factor that later led her to achieve renown. A peacock on the stage, her performances — no matter the venue — always have resonated (and likely always will) with an audience.

And as she explained, on a rainy June afternoon, how her career as a touring concert pianist brought her to the Monadnock Region, it was easy to see why. Her electric demeanor brightened the living room of her Court Street residence — a home with a rose-colored exterior, paired with a vibrant and vintage interior décor — as she talked of her love for Keene.

Her husband, Joseph Steinfeld, grew up in Claremont, and the two have owned a summer cottage on Gilmore Pond in Jaffrey since 1986. Eskin — who was then living in Boston and working at Northeastern University as a music professor — soon became known in the region, popping up over the next 20 years to play in the Monadnock Music Festival and other area performances, including at Keene State College.

During that time, she teamed up with Gladys Johnsen, a former tenured music professor at Keene State, to create two cantatas — a musical composition intended to be sung, rather than just instrumental — based on New Hampshire composer Amy Beach, who Eskin said she’s always idolized.

“I sort of tied my destiny to Amy Beach,” she said. “When I was about [24], somebody said, ‘You should look into her,’ and when older people who are hiring you tell you that, the smart ones say, ‘Good clue!’”

Beach, who was born in Henniker in 1867, is known as the first female composer to have a symphony performed by a major orchestra and was also one of the first U.S. composers to have her music recognized in Europe.

For Eskin’s work on the cantatas, she received an honorary Doctorate of Humane Letters from Keene State in 2009. And it wasn’t long after that Eskin was offered an adjunct professor position in the college’s music department, and she and Joe moved to Keene for good.

“I always felt when I would come here for rehearsals that this is a charming city,” she said. “There’s an enormous amount of culture here. My God, I mean, normally you could go to five concerts a week here just at the college, and then festivals in the summertime and Brattleboro, and you could zip down to New York or Connecticut. It’s very, very easy to be a musician in this little basin.”

Eskin has devoted her performances and teachings to highlighting female composers — something she wishes she knew more about when she first began playing the piano all those years ago.

“I knew a lot about women painters, women authors. But where’s the music?” she said. “Nobody ever told me to play women composers.”

Now, with her work celebrated internationally, her many recordings include works by Beach, Rebecca Clark, Marion Bauer and Ruth Crawford.

Before putting down roots in the Monadnock Region, Eskin performed as a soloist with many orchestras, including symphony orchestras in Annapolis, Md., Buffalo, Louisville, New Hampshire, San Francisco, Santa Barbara, Calif., and Utah, as well as the Boston Classical Orchestra, the Israel Sinfonietta and the Boston Pops. Eskin has also performed with the New York City and Boston ballet companies, as well, and at dozens of concert halls throughout the United States and Europe. She also studied in London with famous pianists Gina Bachauer and Dame Myra Hess, all helping her become the musician she is today.

José Lezcano, a tenured music professor at Keene State, said he has known Eskin since she first came to the college to work with Johnsen, and has collaborated with her on several recordings over the years. He said her talents and experience don’t go unnoticed, and she is always willing to share them with students and other faculty.

“She’s a phenomenal sight reader, learns music quickly and she has technique to burn,” Lezcano said. “She just is the real thing. She really understands how to wow an audience.”

When asked her favorite part of performing, Eskin said the glamour of it all — dressing up, the makeup and becoming the center of attention on stage — makes the blood, sweat and tears she puts into practicing worth it.

“You never lose the buzz that comes from performing, and it is like meditation,” she said. “You immerse yourself in time, and hopefully take the audience with you on a wondrous trip.”