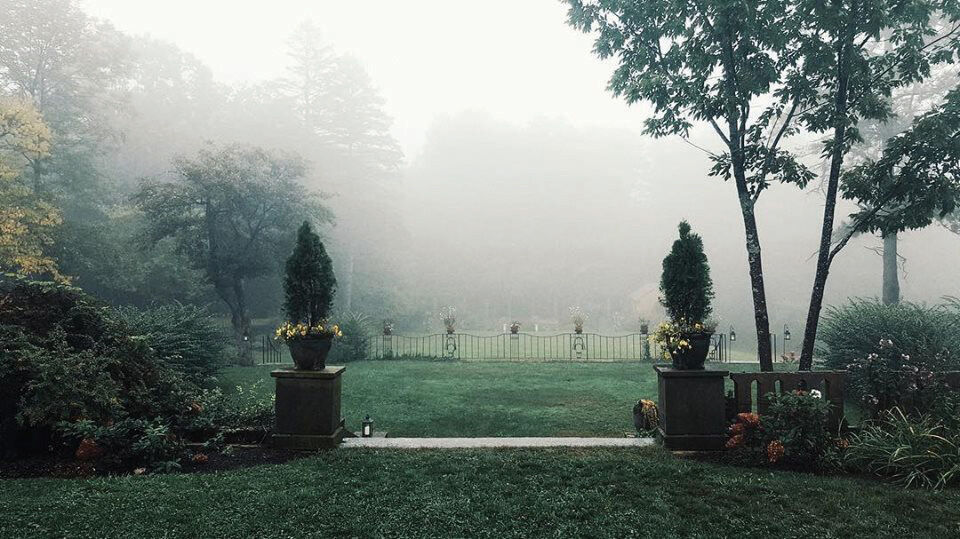 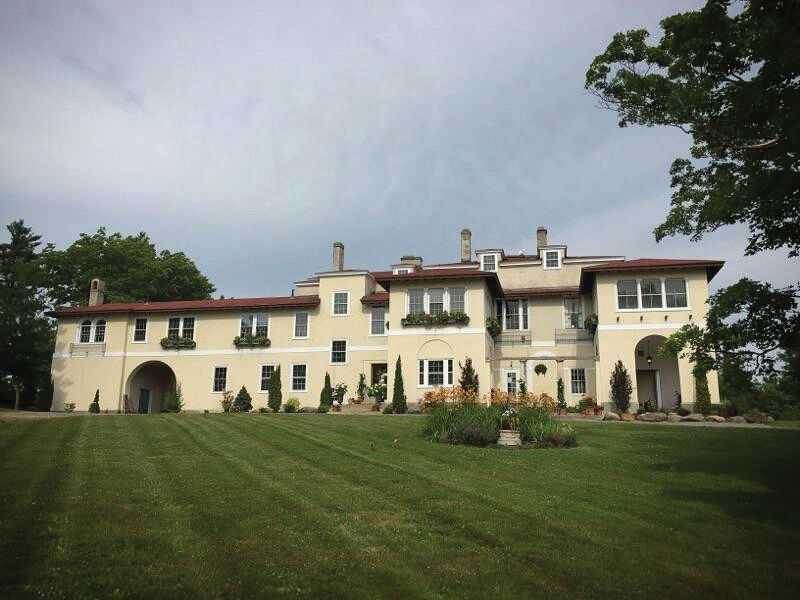 If you follow my column, you know one of my favorite things to do is visit other people’s gardens. Especially since I started working from home mid-March, I’ve seen my own gardens about a hundred times more than I normally would, and right now I’m in that everything’s-already-done-blooming faze. I’m only seeing weeds I haven’t tended to right now or that strip of grass/weeds along the iron fence I missed when I had the push mower out. Get me outta here! Well, what a lucky reprieve I had a couple of weeks ago on a Thursday evening.

Partner, Joe, and I and three friends went to dinner at Hilltop Kitchen at Aldworth Manor in Harrisville. I’d been dying to go since I heard they started serving public dinners on Monday and Thursday nights. I knew an old mansion there was being restored and turned into an event venue and I’d also met Tammy Long, mother of general manager, Shane Long, a couple of years ago at Twin Elm Farm where she was buying antiques to add to the manor.

Well, doesn’t that word “manor” just conjure up all kinds of imagery in your mind? It certainly does for me, and the real thing did not disappoint. In a nutshell, Aldworth Manor was originally built in the early 1800s in Worcester, Mass., but was taken apart piece by piece and shipped via rail freight cars to New Hampshire in the early 20th century; it was carried wagonload after wagonload by horses to Harrisville where it was re-assembled. The wealthy family who owned the mansion spent loads of money updating and adding to it while creating stunning tiered landscaping all around.

Since the Great Depression, Aldworth Manor has served a multitude of uses, including a sanatorium and boys boarding school, according to Wiki (yes, it’s even got its own Wikipedia page). It eventually began to fall into disrepair until an energetic family from Arkansas, the Longs, purchased the property in 2014. Ever since, they’ve been working tirelessly to restore the old beauty to its former glory. Son Shane Long is the driving force behind the project and is joined by mom, Tammy and dad, Roger, as well as brother, Jordan.

The still-plentiful acreage that goes with the estate also encompasses four other buildings on site: Headmaster’s House, Hemlock House, The Lodge and The Nest. Some, if not all, are available as Airbnb rentals. And, of course, there’s the main house where you can throw simple to extravagant soirees of any sort. When Joe and I pulled up to the mansion, I was jittery with excitement. Thank God I’d already had a Tanqueray and tonic or I probably would have started levitating! You see, the idea of an old manse and its grounds being slowly restored to its former grandeur is right up my alley and rather than a commercial hotel chain or some other corporate entity, a family doing it themselves, over time, is sure to reveal and preserve much of its original detail.

After we all were seated on a lower lawn terrace that gave glorious views of the main house, I started to explore. The Wiki page explains that after the house was re-built in Harrisville, terraced gardens were installed to the east of the house and both a reflecting pool and a pergola with Tuscan columns were added just beyond that. Looking at some of the photos I took, I’d guess I stumbled upon both these features… still waiting to be restored yet looking absolutely ethereal with entwining vines and old stonework. I spoke with Shane for a few minutes before I started writing this piece and he told me basically the only thing left in the gardens when they purchased the estate were phlox and heliopsis. Since 2015, they’ve added much in the way of plant material: evergreen shrubs such as arborvitae, deciduous hydrangeas and dozens upon dozens of perennials. I didn’t ask but I’m imagining they must have to wrap those arborvitaes in the winter to fend off deer since I saw no sign of the telltale “lollipop” syndrome where you can see the exact height of a deer’s reach.

With such superb garden structure already in place and presumably in decent shape, can you just imagine the decisions to be made about what to add for plants? Well, they’ve done a terrific job — the dinner was superb (and reasonably priced!) and I felt like I was an extra in the background of an old Merchant-Ivory film at an old mansion in the country. Do visit! The site for the manor is thealdworthmanor.com and the menu for Hilltop Kitchen can be found at hilltopkitchennh.com.