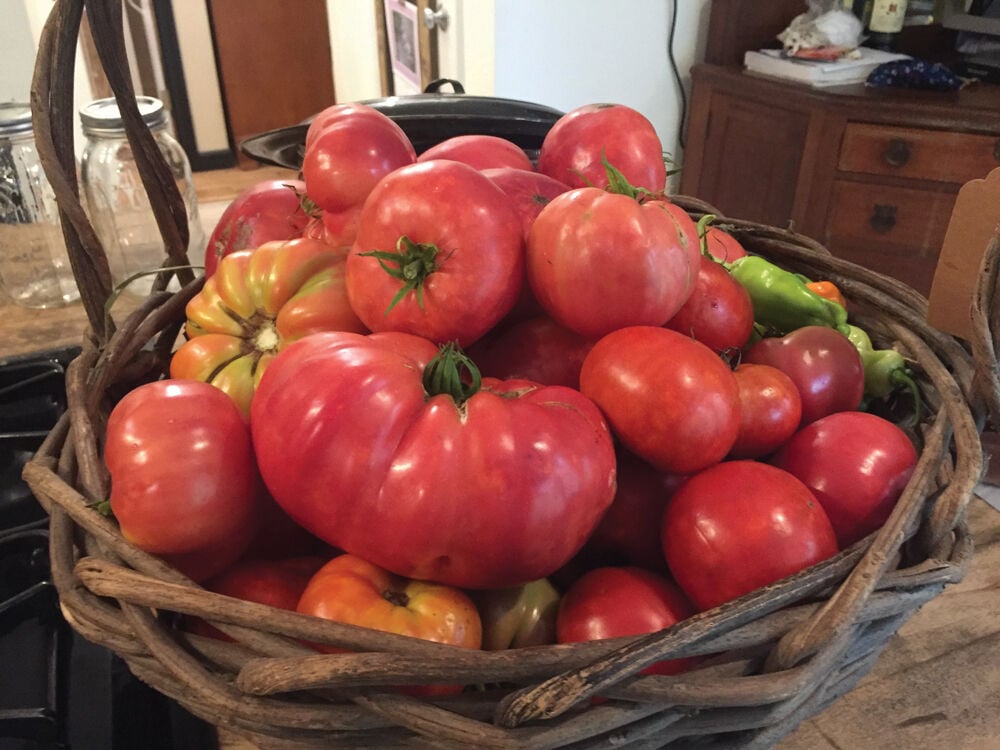 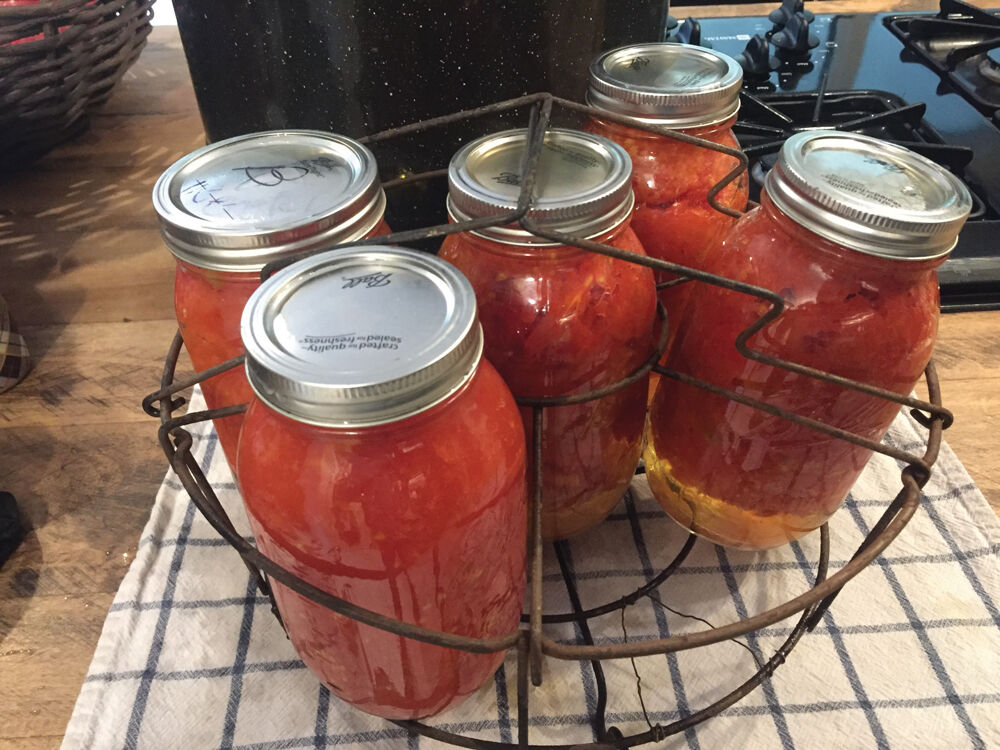 As I sit down to write this in my kitchen, I’m waiting for two big pots of water to boil… one is a big black agate lobster pot and the other is a stainless-steel stockpot. There are probably two gallons of water in each so it takes time to bring them up to a boil. The dog is lying next to me chewing an ice cube and it’s pouring rain outside on this Saturday morning. All seems well with the world, at least for this moment. Soon, I’ll take a break from my laptop and dump 20 or so ripe tomatoes into the boiling water. Then this little nugget of peaceful bliss will pass, and I’ll be sweating over the steam.

I’ve got a bit of a love-hate relationship with canning tomatoes. On the one hand, I love eating tomatoes in virtually any format — fresh in slices, salads and salsa; stewed in goulash (American chop suey), and highly cooked down into tomato sauces for anything pizza or pasta. I love growing the plants, since they are true heat lovers, and once established, they need so little care except for a watchful eye patrolling for hornworms.

The smell of the plants themselves on my hands is very pleasant too. Canning up a bunch of ripe tomatoes is also very satisfying, for the sense of purpose and accomplishment it provides as well as that heady late-summer feeling of getting ready to hunker down for the winter. What I dislike about the canning process is it’s such a process!

Tomatoes are technically about the easiest thing there is to can. They’re high in acid, which is a natural preservative, and the only addition to the jars aside from the tomatoes is a teaspoon of lemon juice to each one just before you put the lid on. The basic steps are: blanch the raw tomatoes in boiling water for a few minutes until the skins start to peel off; then dump the tomatoes into a cold water bath to cool them for the hands-on preparation; next is the removal of the skins, the core and any dark spots or damage; then the filling of the jars to about an inch from the rim, and in goes your teaspoon of lemon in each. With the lids in place, you then place the entire jars in a pot of boiling water and let them boil away for about an hour. Removing the jars while they’re boiling hot requires care. I just found one of those old wire canning jar holders that you actually put the jars in and then plunge the whole thing down into the pot. After an hour, you grab the holder’s handles and slowly lift the entire bunch of jars out all at once, transferring to a dishtowel on your countertop. After the jars cool for a while, you should start hearing a little popping sound where, one by one, the lids’ centers get slightly inverted. That’s when you know they’ve sealed properly. And voila! You’re done!

Sounds easy, right? Well, the process is not without its frustrations for me. I’m not a cook by any means, though I do like the idea of putting up fresh vegetables that I’ve grown myself. For me, it’s the multi-step process and the overall time it takes. Between writing paragraphs two and three, I dropped the first 15 tomatoes into the boiling water and immediately gasped with a little horror as I saw two or three of those light brown triangular bugs (that always seem to be on tomato plants) floating in the boiling water. I had to quickly overcome my spontaneous need to save the creatures (don’t get me started on the various little living things I’m always intent on saving), since I was pretty sure they died the instant they hit the water. Just before I started this paragraph, I was peeling my second batch of tomatoes in the cold-water wash and remembered a key thing I hadn’t done: core the tomatoes before blanching them! If you don’t, you’ll be like me… holding a big glob of tomato in one hand over the sink while trying to cut out the core with a paring knife. Blanching softens the tomatoes and thus that paring knife plunges easily through the fruit and into the palm of your hand.

So, you want to get started on your own canning journey? First, you’ve got to spend a bit of money. All of those jars and lids are expensive to buy so don’t plan on actually saving any money on your grocery bill this year. Luckily, you’ll have them for years to come. You can buy just the new lid inserts every year and re-use both the jars and the screw-top ring. I’ve got some old bail-top canning jars with glass lids and you can still buy the rubber rings for those as well. Without that tell-tale popping sound of the more modern metal lids, though, I’m not sure how you can feel assured that they’ve properly sealed. Just have faith. Oh, and have some wine if you’re canning after 4 p.m. It’s just a little rule I have, and it makes the process just a little more enjoyable… that and maybe some opera music in the background as you toil away in the steam.