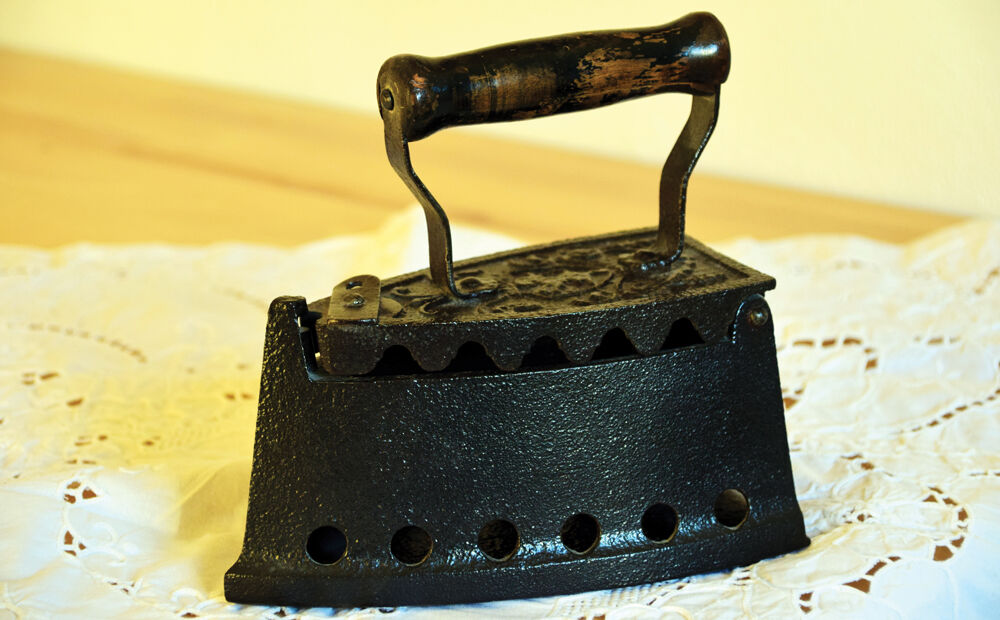 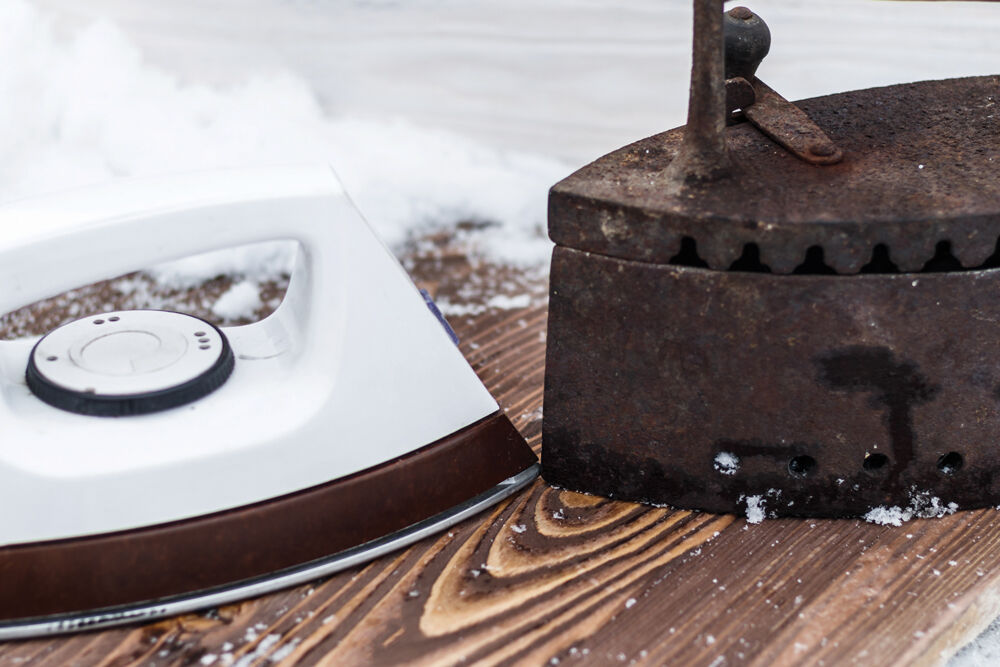 Growing up in the 1970s, I remember my Mom ironing my Dad’s handkerchiefs and even his boxer shorts. The ironing board had a grey Teflon cover on it and she always had a blue can of Magic Sizing nearby. The smell was pleasant, and I can still remember the hiss of the steam escaping. This was a pretty typical sight since most of my neighborhood friends’ moms were homemakers.

However, by the end of the decade, things began to change and once my parents began their nursery and farm stand in New Hampshire, the iron vanished from any daily use. The appreciation for ironed clothes had been instilled in me, though, and for the first 20 or so years of my adult employment, I’d press a shirt every weekday morning. Eventually, I took the luxurious step of having my dress shirts laundered and pressed at the dry cleaners. I still do this today, but my frugality makes me wear them at least twice before being tossed into the dry cleaning bag in the closet.

In the world of collecting and antiquities, irons aren’t highly regarded. I always wondered if the term “sad iron” was somehow related to their unpopularity. Old cast iron sad irons usually only garner a couple of bucks at the auction. If nothing else, they make great door stops.

I actually asked for a new steam iron for my birthday this fall and got one! I do still occasionally iron some clothes and household linens but had really soured on my old Black & Decker model because it leaked and sputtered out scalding water that would inevitably land on my hands. My ironing board cover was way too thin, as well, and you could see the metal mesh pattern of the board itself in some materials. Anyway, I got the Cadillac of steam irons — a Rowenta — for my birthday, along with a new Teflon-looking grey board cover that I put right over the old one for extra cushion.

I’ve been enjoying the sense of satisfaction I get making a pair of my wrinkled khakis nice and crisp again and I’ve even started ironing some of our dinner napkins. The thick cotton ones that even after attempting to fold them, resembled a ball of fabric that had been stuck in the corner of a fitted sheet in the dryer. Well, no more! For now, at least, they don’t go back into the sideboard drawer unless they’re pressed.

My regained appreciation for ironing made me do a little research on those old sad irons… what I assumed were probably the very first types of irons meant to press clothing and textiles. It turns out sad irons are a relative newcomer in the grand scale of time. According to “History of Ironing” at oldandinteresting.com, Chinese people were ironing clothes a thousand years ago. Fabric was stretched and a pan of hot coals were pressed over it. In Northern Europe, stones, glass and wood were used to smooth out wrinkles. Smoothing stones would also be used to set pleats. Later, glass smoothers in England resembled an upside-down mushroom with the stem serving as the handle. The ironing board itself hasn’t changed all that dramatically over the centuries and was known as a smoothing board.

Fabrics must have been incredibly durable since the whole process of laundering through the Middle Ages included a lot of beating of the fabric items — from the old times of clothing being beaten against rocks in a brook to the beating required for smoothing. In England, there were many terms for a wooden smoother: battledores, battels, beatels and beetles. A flat board combined with a fabric-covered rolling pin were the early mangles. On a larger scale, the mangle was used at commercial laundries and hotels. Often, a bride-to-be was presented with a mangle hand-fashioned by her soon-to-be husband.

In the U.K., sheets and other linens could be sent out for pressing by a mangle-woman (typically a widow). Funds were donated to purchase a mangle for the woman to support herself after the death of her husband. It wasn’t until the mid-1800s that the sad iron finally made its appearance. First made of soapstone but then forged from iron by a blacksmith, they would be heated in the coals of a fire or on top of a stove. The crude handle would also be piping hot so a folded cloth would be used to hold it. Imagine the work involved to say nothing of the burned hands. It was important to keep the sad iron incredibly clean so as not to start the whole laundry process over by soiling a garment with soot.

Despite the image of a woman in the mid-1800s being sad because of the laborious nature of laundry, the term “sadiron” comes from the word “sad” meaning solid or substantial; those 5-pound irons certainly were substantial. In 1870, a detachable handle for the iron was patented and the most efficient way of completing the task of ironing was to have two of them. One would be always be heating up while the other was being actively used.

Back to the present. I appreciate my new Rowenta very much and though it’s still possible (even probable in my case) to burn your fingers while ironing, there’s no sadness involved in the process. I actually find it kind of meditative and peaceful.