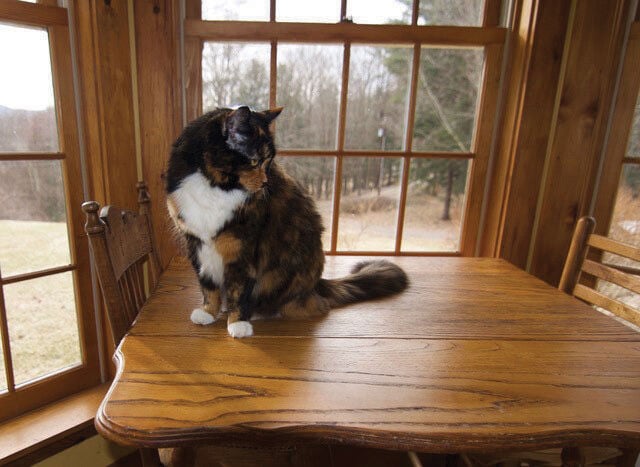 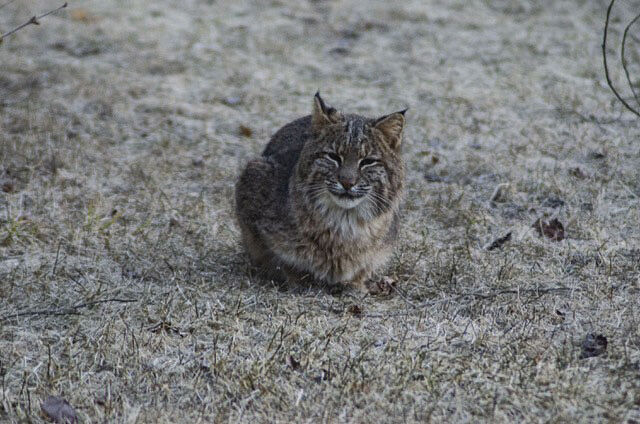 The air outside is a skinny 19 degrees, thin enough to finger its way inside during this equinox night through unseen cracks between door and frame and form an airy pool on the tile floor of my kitchen. I feel its coolness envelop my naked ankles as I sit at the table and wonder if I shouldn’t have put on longer socks. But my aversion to the cold fades quickly as I realize its refreshing effect after a fitful night of half-sleep under too many warm blankets.

Once to proper temperature and with a cup of French roast in hand the mind goo from last night begins to dissolve and sticky eyelids pop open to full blossom. Now I see the orange glow of a new day just below the hilly horizon and in three more minutes, I find myself almost back from the living dead and fully embedded in my morning ritual with a klatsch of morning friends: my cat Skunky, perched on her lookout platform — which she allows me to also use as a kitchen table — Mr. Coffee, whom I

hold in two-handed embrace for warmth against my ever-present Raynaud’s Syndrome, and a cast of tens of various feathered and rodent-like creatures that scurry convulsively under the feeders.

Through paned windows, hazy with the blue-grey dust of winter, I watch chickadees, nuthatches, titmice and a cardinal flit between bush and feeders. In the last five days, they have put on their spring voices. These golden seasonal melodies are, note for note, the same as when I was a child. I love the timeless feeling of these sounds. They give me a sense of solid ground under my feet where all else is flux and shape shifting. It is the sound of grace.

As dawn defeats dark, these creatures are revealed in increasing numbers. Skunky expresses some interest in the scurry of wildlife below the feeder, though I realize this penchant has diminished significantly over the past three years. She can now take or leave the small red squirrels that in bygone days were irresistible in their just-right size and jerky movements, not unlike that of a fishing lure.

Her muscles tighten momentarily and relax as a confused and squawky mix of creatures fight for dominion on a small area of lawn where sunflower seeds and corn kernels have fallen from feeders. Her predatory sense still smolders within as they manifest in her occasional chattering and tail twitches. But they have gone deeper now. Fading impulses that used to whisper to her when to keep still and scream when to lunge, have transformed into gaping yawns. She relaxes and rests her head on the table in drowsy surrender to her 16-year journey into elderhood.

This is our morning ritual. Skunky, me and Mr. Coffee. It’s a comfortable trio with which to spend this early hour and often my peak experience of the day.

That other animal Skunky startles me by jumping to her feet. Her wide-eyed attention is on whatever is behind me outside close by. A faint gurgling growl rises in pitch almost to caterwaul. She is agitated. Whatever she sees, I know it isn’t one of the usual suspects come to check out the breakfast menu at the feeder pole. I swivel my chair ever so slowly around for a peek.

With the many shadows still on the lawn, I see only a penumbral outline of what appears to be a fat, squatting rabbit with pushed back ears. Despite my movement, this animal’s gaze seems to include only Skunky and it keeps its ground. As my eyes adjust slightly, the rabbit turns into a large cat. That of a neighbor, I wonder. It seems pretty big for that! Squinting, I see the short and thick dappled fur, tufted ears, spots and facial markings I know to be that of a bobcat!

This looks like the one I’d seen three days ago strolling casually along the crown of the gravel road in the front of my house. Its muscles, rippling in tiny waves along its sleek body and lapping over raised haunches in small waves suggested its potential for power and speed. Its trim and graceful body, as it sauntered past my view, mimicked the strut of an Olympic gymnast approaching the mat. Just passing through in search of better hunting grounds, I think.

Then it occurred to me that the brush piles I’ve established over the past 30 years have probably resulted in vast critter condominiums, its tenants an array of delectable fleshy snacks that no fox, coyote or bobcat could pass on. Perhaps he has decided to take up residence in my back yard. I love the wildness of where I live and enjoy the variety of animals that visit, but I am ambivalent about a bobcat sharing the same small domain as Skunky the Elder.

Several minutes pass and the rising sun clarifies the situation. The feline cousins remain attached at the eyes. Skunky’s growl diminishes to guttural spurts while the uninvited breakfast guest relaxes from its crouch. Him, I think, or her? My cat is not unattractive, albeit in an age group well beyond that of the youngster outside.

The lust-driving vernal forces of the animal world is powerful and unpredictable. But can it trump hunger and transcend age differences? Better a suitor than a diner, I think, still worrying about letting my cat out to share the playground with this powerful predator lurking. What’s more, any lustful gestures of his would be strongly rejected by my senior cat. Now I worry: How well do bobcats handle rejection?

Not participating in this staring contest, I decide it’s a good opportunity to fetch my camera. I take several photos… one from my kitchen, two others from a window in the living room. Did “Mr. Bob” suddenly realize the hopelessness of the situation or has his stomach overpowered his amour?

Apparently, a sudden sound or motion to his right commands his attention and he quickly slinks away, maintaining his low crouching — one that appears more predatory. I go outside with my camera to see if I can get a few more photos without the dirty glass between the two of us. But remnants of snow is crunchy loud and I realize he’d have to be stone deaf not to hear my approach. Nevertheless, I get to the corner of the house and, with finger on the shutter button, jump into view of where I thought he might still be. Behold! Only three feet in front of me, standing still as a frozen shrub, straight and tall… the lilac bush!

Inside, Skunky paws the glass door to be let out. I pause, thinking again about the interloper’s intentions toward my precious pet, then open the door. Darting into the frosty air she mingles with, but ignores, a raucous mix of birds and mammals in a whirlwind of rituals. Her hunter spirit is aroused to a level I haven’t seen in years and she’s off at a fast trot. I spy her meanderings from the side window as she smells the ground and the corners of the outbuildings, searching it seems for the owner of a peculiar and undocumented odor. Her alertness, ready stance and focus makes her look suddenly younger and more alive. More catlike!

Meanwhile, I find a forsaken Mr. Coffee on the bathroom sink — he always wanders off when my back is turned, though some people claim it’s my age that is to blame — and stick him in the microwave for a few revolutions. Outside I notice a flock of 12 mourning doves dominate the pecking grounds. For no discernible reason, they panic and fly off in a scatter of a cappella wing whistles, vanishing into a copse of grey maples. The rodents scurry in spirals before darting straight away in the four directions, clawing up trees, or diving into one of a dozen or so black holes in the rock wall. Except for the swinging of the feeders, it is suddenly quiet and deathly still outside.

I grab the heated joe from the microwave and head outside, nervously reconnoitering the back yard for my cat. So ghostly hushed is it, I believe I am hearing the steam rise from my coffee cup. I perambulate the entire perimeter of my property. I don’t like the sense of doom I feel; I have felt it before, justly so, with three other cats, though she probably just has lots of business to tend. Certainly, she will be back for lunch. And Mr. Bob? No worries about him, I decide, based on my personal brand of clueless logic and desire to believe what I choose. Cats are NOT cannibalistic... at least not that I’ve ever heard. Or are they? Hmmm… maybe I should Google this one!

I scout on, whistling, calling out and thinking once again: Is he suitor or diner?