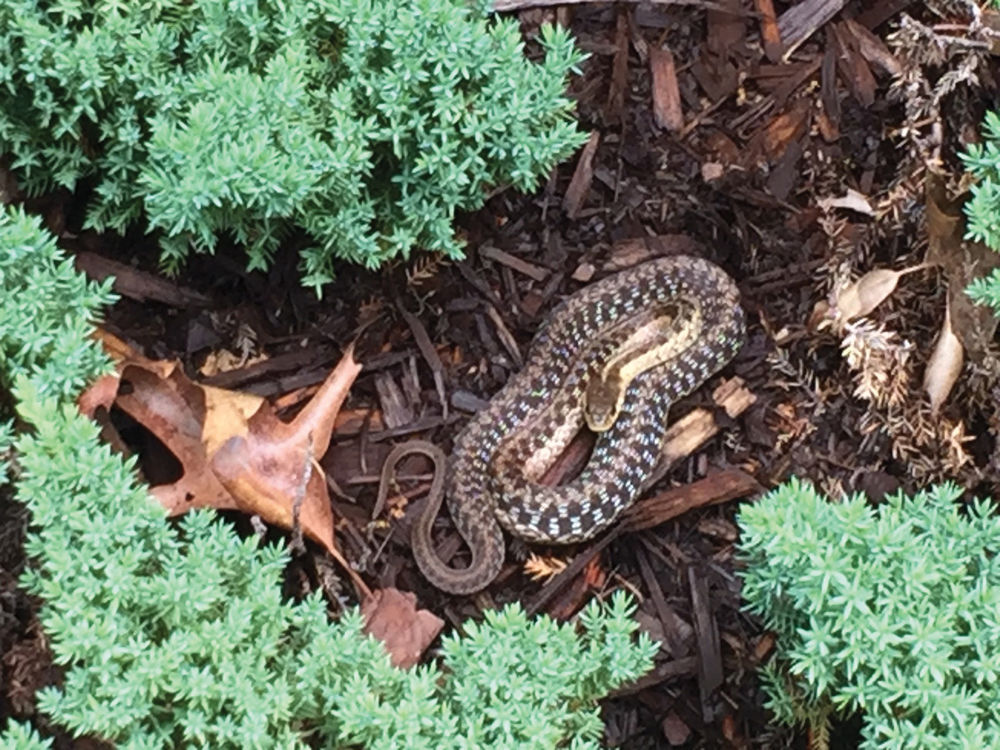 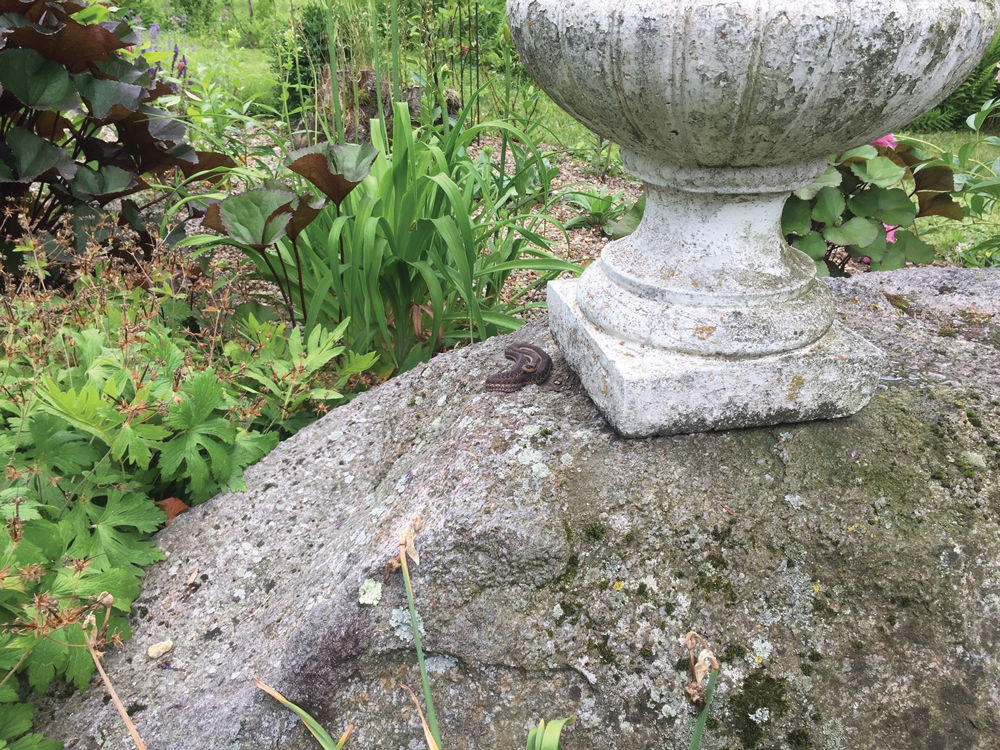 Snakes. I’ve seen more of them this year in the gardens and landscape than I usually do. I know there’s even more of them I haven’t seen. So quiet and unassuming. Watering wand in hand, I’ll kneel down and reach far into a bed to yank a weed and suddenly I see one of them just another arm’s length from my face and I’m startled. They’re not startled at all though.

As long as I don’t cross some invisible boundary, they remain calm yet ever-watching… letting the sun’s rays warm them. Every few seconds I catch a glimpse of a narrow tongue protruding and retracting in a millisecond — their barometer for gauging danger. As I pull myself back up on my feet, I’ve caused just enough movement, so it decides to move its sinewy body… uncoiling itself and calmly slithering deeper into the garden foliage. Despite my appreciation for this creature and its languid body of perfect muscle, it still sends a slight shiver down my spine. It’s the year of the snake here at our elevated Dublin property.

Growing up, I was always fascinated by small wild creatures. Snakes, toads, frogs, turtles and salamanders. I once caught a garter snake and decided to keep “him” as a pet. I named him Zombie. I kept him in a small aquarium and not really knowing what they ate, I put in some earthworms. Sure enough, one day I looked in and one of the worms was sticking halfway out of Zombie’s mouth. I picked him up to get a closer look, which apparently wasn’t a good thing to do, as Zombie then commenced regurgitating the worm. In a moment of concern for his wellbeing, I decided to let him go and put him next to a stone wall; he immediately disappeared into it.

Not every small creature I captured as a boy and decided to keep wound up with such good fortune, but Zombie did. My sister, Wendy, was and still is petrified of snakes and my best friend, Dennis, and I would occasionally torment her with them. Not very nice, I know. Then again, she was two years older than me and could easily beat the crap out of me, tormenting me now and then by holding my hands behind my back and making me eat leaves off a tree. Ahhh, childhood back in the 70s. We didn’t have video games and cell phones to keep us distracted so we made do.

So, there does seem to be more snakes in the yard this year than usual. Then again, with the new daily routines dictated by the pandemic, I’m spending even more time than usual in the gardens and landscape. There’s one in particular whose residence is my stone wall-enclosed peony garden. I call her Big Mama because she’s probably nearly 3-feet long and has a thick body. Sometimes smaller snakes (I presume offspring) are wrapped closely with her as she lies in the sun.

All of the snakes I’ve seen here are common garter snakes, Thamnophis sirtalis. According to “Garter Snakes Facts” at livescience.com, garter snakes are among the most common in North America and their range spreads from Canada all the way down to Florida and even into Mexico. There are 11 species of snakes in New Hampshire and only one — the timber rattler — is venomous. A bit of a misnomer, according to Wikipedia, garter snakes do have a mild neurotoxin the glands in their mouth secrete when they strike prey; a sizeable pair of needle-sharp back teeth first punctures the flesh of their prey, allowing the neurotoxin to be absorbed and partially paralyze a frog, a salamander, a tadpole etc. The venom is mild enough to cause little more than slight swelling or redness in humans, if anything at all.

The immaturity of boyhood is many years behind me, so I now merely observe the snakes and think of them as beneficial neighbors in the garden. Even at my sister’s home on the other side of New Hampshire, I spotted a small garter snake near her front door and decided to relocate it before she saw it and freaked out. Only catching it by its tail as it slithered under a hosta, it actually did swing around and bite me in the finger. I quickly grabbed it right behind its head so it couldn’t strike again, took it across the street to a scrubby area and released it.

Fun facts about garter snakes… females give birth to between 10 and 40 live babies after mating season. I’d always assumed they laid eggs, but no. There tends to be many more male garter snakes in an area than females. Males and females emit strong pheromones after emerging from winter hibernation; some males emit both male and female pheromones, causing other males to try entwining with them to mate. This is beneficial to the trickster because the male snake can absorb thermal heat from the romancer, a technique called kleptothermy. This added body heat gives the receptive male more energy to quickly un-copulate and head back to an awaiting female.

During mating season, a single female snake may be entwined with 10 or more males attempting to breed with her. This is called a mating ball. Weird but creepy! I’ve never come upon a mating ball of snakes and that’s probably just as well. Two or three scattered throughout the gardens at one time is enough for me. I titled this piece after a favorite old 70s made-for-television movie called “SSSsssssss,” which was about a mad scientist who was slowly turning his daughter’s boyfriend into a snake. It was great fun and I wonder how a viewing would hold up today. Look for it if you’re into that sort of thing. Or an easier find would be the 2006 Samuel L. Jackson flick, “Snakes on a Plane!”