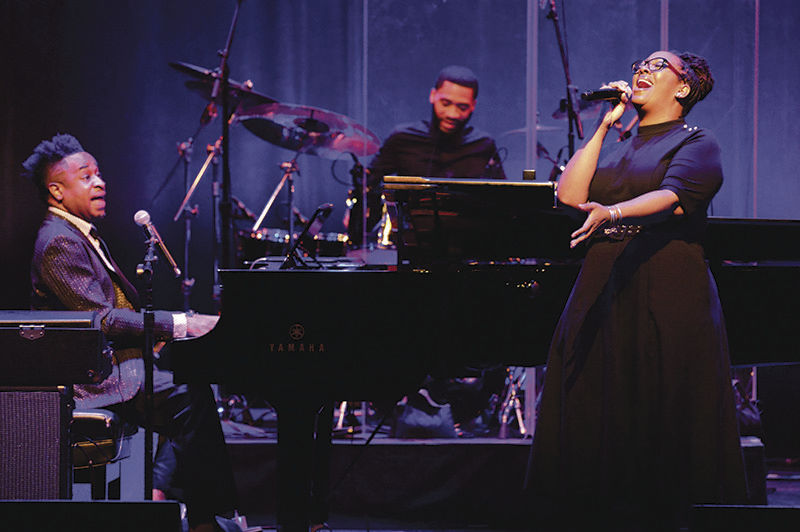 Composer Damien Sneed took Martin Luther King Jr.’s message of triumph over racial injustice and presented it to audiences through the universal language of music.

The Augusta, Ga., native — also a pianist/organist, conductor, arranger, producer, arts educator and multi-genre recording artist and instrumentalist — is bringing the performance to Keene early on in a 40-plus city North American tour that kicks off at Joe’s Pub in New York, N.Y. (one of the country’s first nonprofit theaters). The tour coincides with Martin Luther King Jr. Day, Black History Month and Women’s History Month.

The program (the show premiered in 2018) is packed with timeless songs by Aretha Franklin, Duke Ellington, Stevie Wonder, Marvin Gaye and Nina Simone, as well as traditional spirituals that evoke the struggles and triumphs of the civil rights movement. The music is interwoven with excerpts of Dr. King’s recorded speeches.

“It’s what Martin Luther King Jr. stood for — unity and peace — presented through all the indigenous musical forms of America,” said Sneed in a recent phone interview with ELF. “(The show) is not just about racial disparity — it’s about overcoming anything in life.”

For Sneed, it’s about overcoming his being adopted and the difficulties he went through growing up.

“I looked up to Martin Luther King Jr.,” he said. “A lot of music I heard in church, school and my community was of the civil rights era. I made sure the musical content had to do with protest and reconciliation — that’s our aim and impetus [for ‘We Shall Overcome’].”

The show was first performed as a tribute to Martin Luther King Jr. at Ginny’s Supper Club at the Red Rooster in Harlem, N.Y. It was performed there for two years before Sneed took it on tour. Joining him will be an ensemble of multi-genre vocalists and instrumentalists he’s worked with in the past, whether in college or professionally.

Sneed has done so much more than overcome — he’s become a celebrated figure in the music world. He has worked with jazz, classical, pop, and R&B legends, including the late Aretha Franklin and his godmother Jessye Norman, as well as Wynton Marsalis, Stevie Wonder, Diana Ross and many others.

He’s featured in Aaron Dworkin’s new book, “The Entrepreneurial Artist: Lessons from Highly Successful Creatives,” which also features Pulitzer Prize winners Marsalis and Lin-Manuel Miranda and Tony Award-winning choreographer Bill T. Jones. He recently joined the faculty of the Manhattan School of Music, where he teaches graduate-level courses in conducting, African American music history and other pursuits and is graduating in 2020 with his doctorate in orchestral conducting.

He conducted Wynton Marsalis’ critically acclaimed “Abyssinian Mass” last month with the Jazz at Lincoln Center Orchestra and his own choir, Chorale Le Chateau, for a three-night engagement. He was commissioned to compose a new chamber opera about the life of African-American classical/spiritual singer Marian Anderson for Houston Grand Opera (premiering in March) and to compose a symphony in honor of the Tuskegee Airmen with its world premiere in summer 2020 in the Washington, D.C. Metropolitan Area.

The composer and pianist also recently premiered his new opera, “We Shall Overcome — Our Journey: 400 Years from Africa to Jamestown,” for which he wrote the libretto. It showcases musical styles from the African American diaspora from African rhythms to spirituals to gospel to jazz, all interwoven in the classical genre.

In a way, the Martin Luther King Jr. tribute performance is how Sneed pays it forward. He talks about the many “transformative things that happened” while the show was on tour in 2018. After each performance, he and his fellow musicians greet the audience and talk to them.

“People of all demographics and ages sing and dance in the aisles and come up to us weeping, wanting a hug and to take photos with us,” he said.

He recalls a woman who came up to him in Conway, Ark., after a performance during which the story of Emmett Till was told. Emmett Till was a 14-year-old African-American boy who was lynched in Mississippi in 1955 after being accused of offending a white woman in a grocery store.

“She whispered she wanted to talk to me,” he said. “She said the music made her cry. She was Emmitt Till’s first cousin. I lost it.”

A young woman after another performance approached his band and told them the music they played helped her with her struggles with being blind.

“One of our singers gave her a hug — they still keep in touch,” said Sneed.

Each performance closes with an audience sing-along of the song, “We Shall Overcome.” He and his fellow musicians have heard stories from audience members who heard Joan Baez sing the song on-stage or were Freedom Riders during the civil rights movement and sang the song while protesting racial inequality.

“The music reflects an era when artists were not afraid to speak to social change and injustices and bring people together,” said Sneed. “There are black Americans in the audience that have never been at a performance with people who weren’t African American, holding hands with them — that’s what it’s about.”