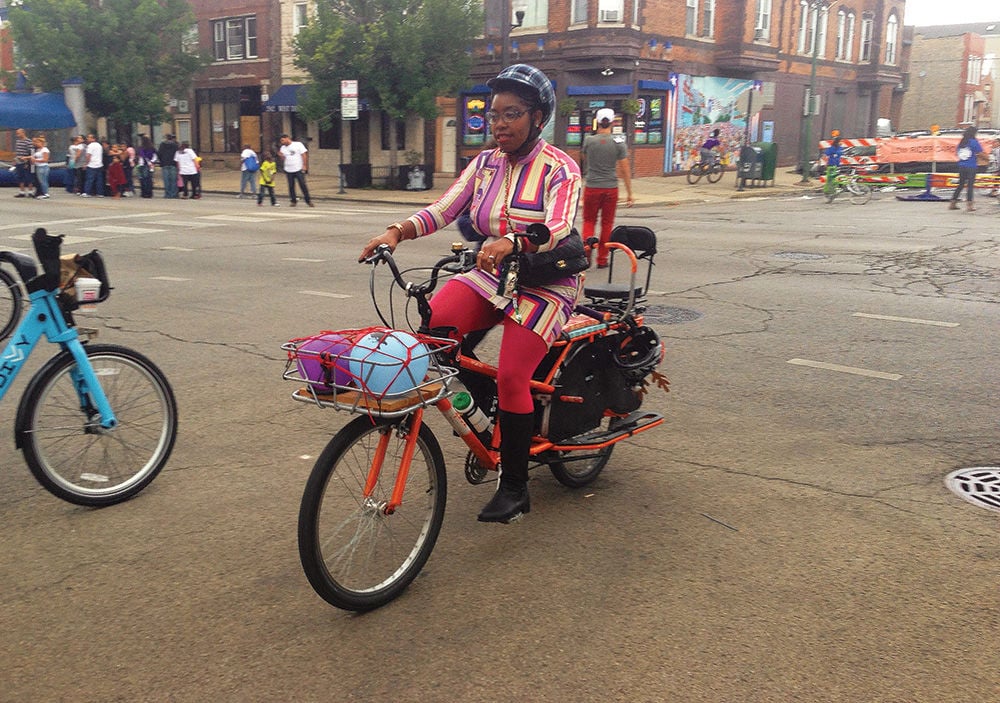 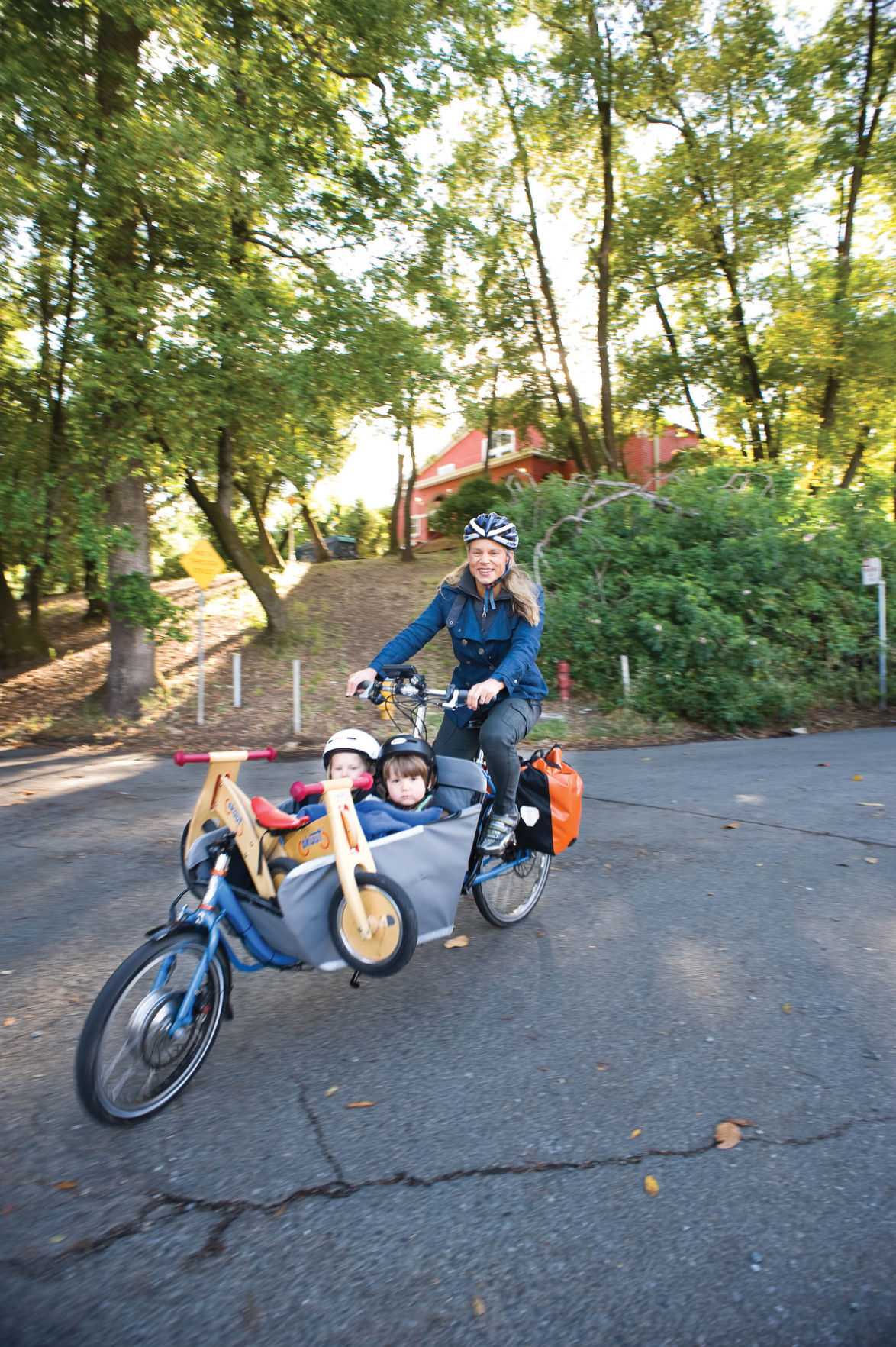 Liz Canning was a lifelong bicycle commuter racer. She rode her bike everywhere, until she had twins in 2008.

“I couldn’t pull my kids up a hill,” she said in a recent phone interview from her home in Fairfax, Calif. – a town in the San Francisco Bay area widely regarded as the birthplace of mountain biking.

She Googled “family bike” and uncovered a global movement of people replacing cars with cargo bikes: long-frame bicycles designed for carrying passengers and heavy loads. She set out to learn more, and her film, “Motherload,” was born.

A free virtual screening of her crowd-sourced feature documentary, an event co-hosted by Monadnock Food Co-op, Monadnock International Film Festival and Monadnock Alliance for Sustainable Transportation, happens this evening from 6:30 to 8:30 p.m. This community screening celebrates National Bike Month, a promotion each May that highlights the many benefits of bicycling and inspires individuals to bike more often.

Canning, who graduated from her first cargo bike equipped with a box to fit up to four kids to an electric-assist, long-tail cargo bike with a mid-drive motor for climbing hills with ease, was surprised with how intensely people reacted to her when she began reaching out to cargo bikers at the start of her film project in 2011.

“People who’d tried it were posting video, chatting. The excitement was palpable,” she said. “I could tell there was something going on.”

She put out a trailer early into the project asking people to share their stories of life on a bike, what makes it important to them and how it helps them and their families live a better life.

“It was pretty overwhelming,” she said of the responses. “When people do this, they have a strong feeling that more people need to do this.”

She received a lot of video shot by moms transporting their children, people delivering emergency supplies on their cargo bikes and some footage from a missionary living in Africa who plants trees as an anti-erosion initiative.

She also got a lot of clips from families who weren’t cyclists when they started using their cargo bikes but soon after, they traded in the family car. Some of these people had debt and were looking to save money.

For Brattleboro resident Dave Cohen, who will be part of a post-screening discussion panel along with Canning, biking is a lifestyle and has been for a very long time. He is featured in “Motherload” riding his cargo bike in the snow.

He is the founder of VBike, a nonprofit organization dedicated to shifting the bike and bike culture in Vermont by promoting cycling innovations and solutions, including electric-assist technology and cargo bikes, while making these options financially viable to as many Vermonters as possible.

Before VBike, Cohen founded Pedal Express, a bicycle delivery service operating a fleet of cargo bikes in Berkeley, Calif. The delivery service gained national recognition for its partnerships with local urban farms, businesses and city governments. Pedal Express celebrated its 25th anniversary in 2019 and continues to be a model and inspiration for similar businesses throughout the nation.

While at Pedal Express, Dave developed the Bay Area Sustainable Transportation Education Project (BAYSTEP), a non-profit organization devoted to showcasing the potential of bike transportation and teaching about the region’s transportation history. BAYSTEP developed a mobile demonstration fleet of cargo bikes, folding bikes, family bikes and an assortment of other vehicles, representing a wide range of bike technology and solutions. Over the years, Cohen has also presented on transportation and ecological issues in the U.S., Canada and Europe.

Canning began her film by focusing on cargo bike technology before deciding to highlight the emotional meaning of the cycling experience.

“It’s about the human need to be connected to other people, community and the natural world,” she said. “Bikes happen to be an amazing tool that facilitates all of that.”

While Canning’s film raises the question of what it means to be a parent in the time of climate change – the term “Motherload” is a reference to our carbon footprint on the earth as much as it is about transporting children by bike rather than car – she had no intention of using her film to preach. “I didn’t want to say drivers are bad [with this film]. I wanted to invite people into this world so full of joy and then look at why. What is it we’re getting that we need?”

The film’s title is also a nod to the discovery of cycling being akin to striking it rich.

“[The bicycle] is an incredible resource everyone should have access to,” she said.

Since “Motherload” made its world premiere in May 2019, the film has been on a Global Community Screening Tour, featuring over 150 venues. Due to COVID-19 and the need for social distancing, live gatherings have been on hold, but Canning’s calendar has been filling up with virtual events featuring post-film panel discussions. In addition to the film’s director, Canning, and VBike Director Cohen, the panel discussion will feature Prime Roast Coffee Company founder Judy Rogers, and Keene State College Film Professor Ted White.

Event attendees will have a chance to win one of several event prizes, including a pair of VIP tickets to MONIFF, a $25 gift card to Monadnock Food Co-op, a bag of Prime Roast coffee beans delivered to your home by e-bike (must live within three miles of Prime Roast and delivery is subject to weather) and an e-bike/cargo-bike consultation from Cohen.

Registration to the screening and raffle entry can be completed by visiting moniff.org/events. Once you register, you’ll receive a link to access the film. For more information, call (603) 522-7190 or e-mail inquiries@moniff.org.