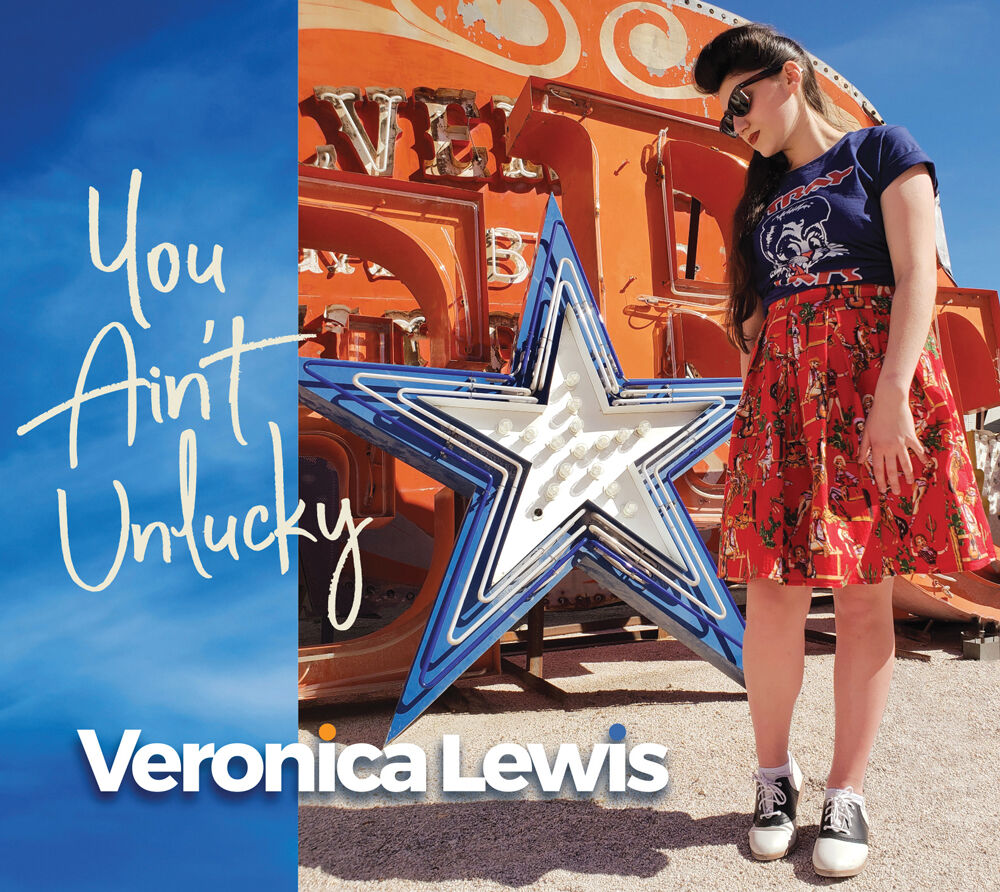 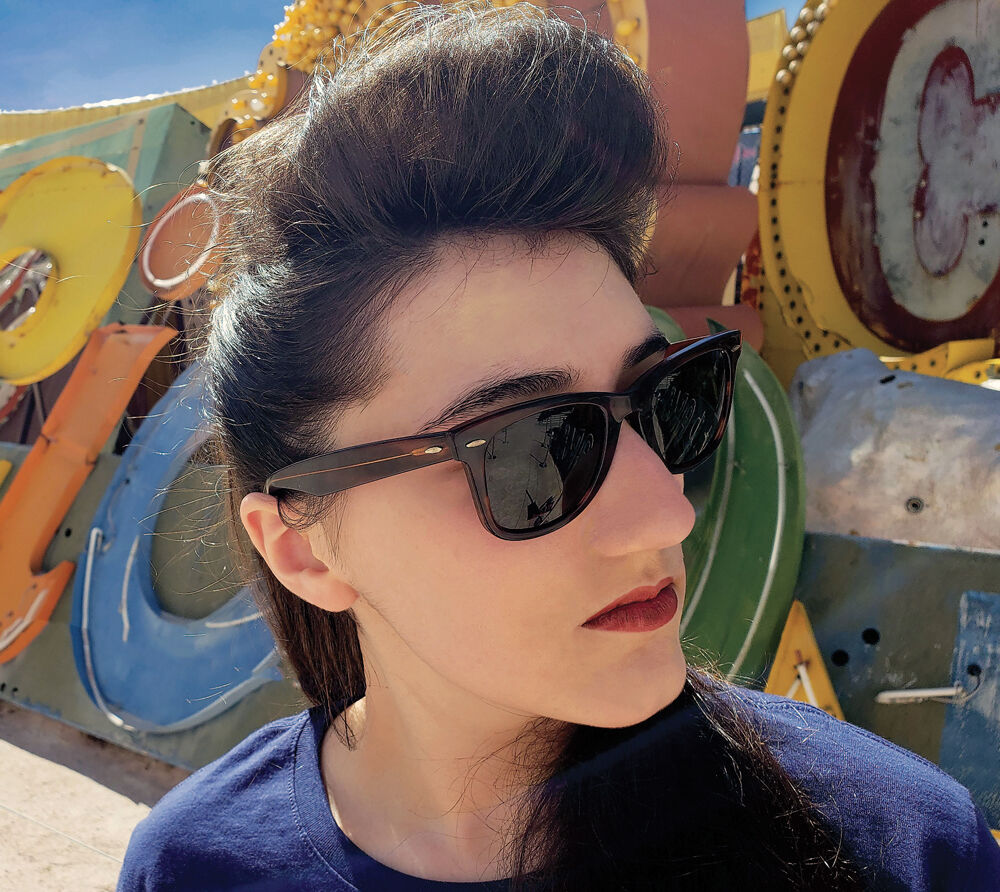 Her music’s got the heartfelt riffs and wailing notes, but Veronica Lewis isn’t singing the blues — she’s grateful for her success, and luck had nothing to do with it.

Lewis’s debut album, “You Ain’t Unlucky,” recorded during the height of a global pandemic, will be released Feb. 19. It’s the culmination of a skyrocketing career as a blues artist that blasted off even higher, against all odds, in 2020. The title track she wrote last February, pre-pandemic.

“The message is extremely timely,” said Lewis, 17, a native of the Monadnock Region. “It’s about how in life there can be difficult struggles, but if you look at them from a different perspective, you grow from it.”

The song is personal for a few reasons. As she was riding home from the studio during recording, she found out her grandfather had passed away suddenly.

“I had a deep connection to him,” she said. “He lost his sight at 15. He never saw me or my mom. Something that connected him and me was music.”

And the song took on a new meaning as the year wore on.

“I’m sharing how I deal with tough things in my life, which is hard to do, especially right now because there’s been so much pain, so much loss and difficulty,” she said. “It’s hard to find something to be grateful for. Appreciating people and things in my life that I love and people who love me — everyone who has helped me through this crazy time — is what has allowed me to get through it. This song is all about gratitude.”

Lewis recorded a video for the song on her own last fall, featuring her on a floating dock playing her keyboards on a New Hampshire lake and in the autumn woods. It premiered on American Blues Scene. The cover art was the result of a photo shoot in Las Vegas, where she played the Viva Las Vegas Rockabilly Weekender in 2019.

That event is just one tiny speck in a whirlwind that has been Lewis’s life the past handful of years, full of moments far more seasoned artists would consider surreal.

She began playing piano at 6 years old. Instead of learning to play classical music, she preferred the 12-chord blues progression. Her mother, Nancy Leotta (also her manager), taught her a boogie-woogie bass line. She was hooked instantly.

Lewis is a multiple winner of the Granite State Youth Blues Challenge and represented the Granite State Blues Society for three years in Memphis in the International Blues Challenge. She opened the New England Blues Summit headlined by Roomful of Blues at the Peterborough Town House (where she also opened for Eric Gale as part of the Peterborough Concert Series) and performed at Alfred’s on Beale Street in Memphis as part of a youth concert at the National Women in Blues Showcase.

She’s already gotten to live out some of her biggest dreams, including playing a song she wrote for one of her influences, Jerry Lee Lewis, at his Memphis ranch on his actual piano. She has also traveled across the country from Nashville to L.A. playing her music at venues and festivals.

Most recently, Lewis earned the title as the Boston Music Awards 2020 Blues Artist of the Year and signed with Blue Heart Records.

Lewis accomplished all of this during a year when all of her tour dates had been cancelled. With the time quarantine afforded her, she learned new skills such as how to produce high-quality livestreamed concerts in order to stay connected with fans. She recorded all of the instrumental tracks with her trio, which includes percussion and saxophone, as well as vocals separately using special microphones and recording software; sound engineer Ben Rogers mixed them at his Jaffrey studio. Later, the recording was laid over the band’s live performances.

“It was a huge learning experience,” Lewis said of the livestreams, shown via Facebook on its Can’t Stop the Blues page — one of the largest virtual blues venues in the world. “I made the commitment that if I’m going to live stream, I want to sound great and be representative of my songs and the musicians playing with me. It’s more like it would be at a live show.”

Lewis chose “You Ain’t Unlucky” as the title track of her self-produced album, which features eight songs (six original tunes and two covers), because she found it a relevant overarching theme. Some are among the first songs she ever wrote.

“I wanted to pay homage to the influences who helped to create the musician I am,” she said, “and also represent the beginning of my career.”

“Ode to Jerry Lee” is a piano instrumental she wrote to her icon; and she honors another of her musical heroes, Katie Webster, with a modern spin on “Whoo Wee Sweet Daddy.” “Memphis Train,” which she describes as an old juke joint-style song, is about following your dreams.

“It’s about putting everything into your passion and being ready when your chance comes,” she said. “I was inspired by the sound of the train whistle I hear outside my window. I imagined driving the train to Memphis and playing with Ray Charles and Pine Top Perkins and all my favorites.”

Lewis also got to perform “You Ain’t Unlucky” with another favorite, Marcia Ball, onstage at the Dr. John memorial show.

“There were two pianos set up onstage and a huge crowd,” she said. “We are all honoring this unbelievable musician.”

Lewis could easily take a little break to rest on her laurels, but the high school senior is fully immersed in her senior year, which she is completing online. She will take some time this year to reflect and appreciate what she’s earned, though, while the blues keep calling.

“It’s this driving force for me to keep pushing, doing the best I can do, keep recording and releasing music,” she said. “It’s a responsibility to keep doing what I’m doing and keep growing as an artist.”