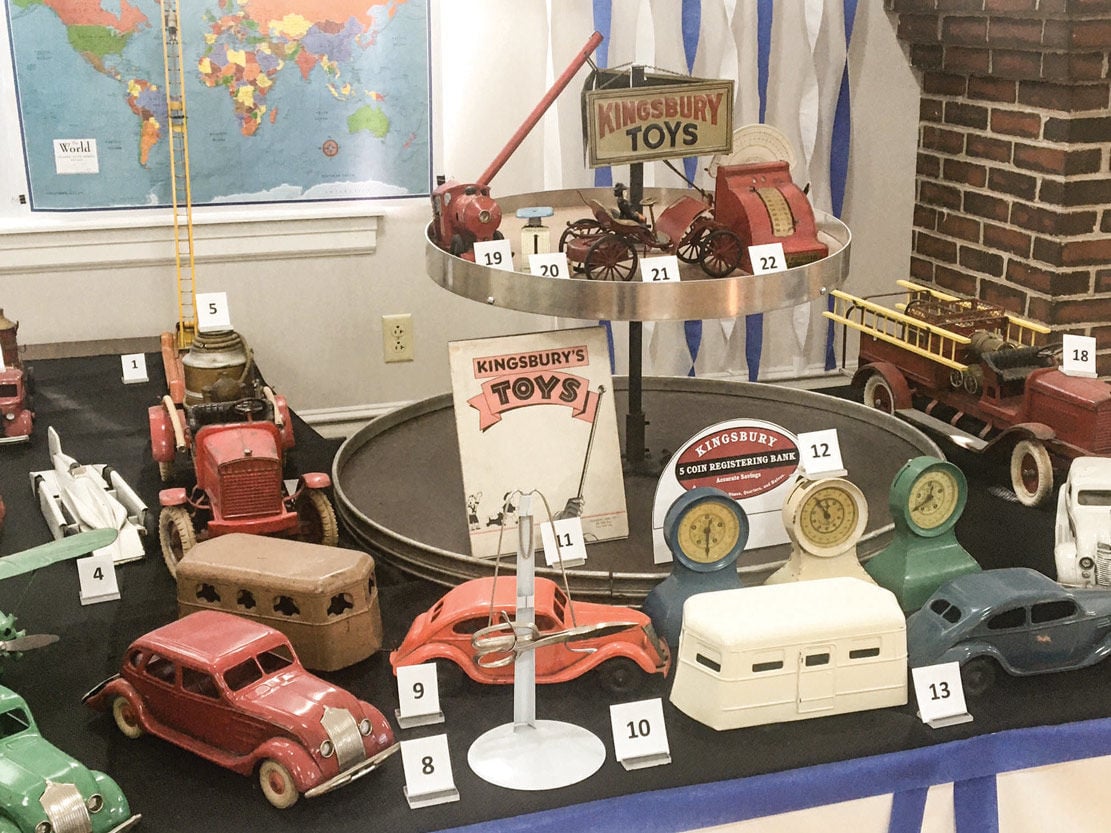 are on display at the Toys exhibit. 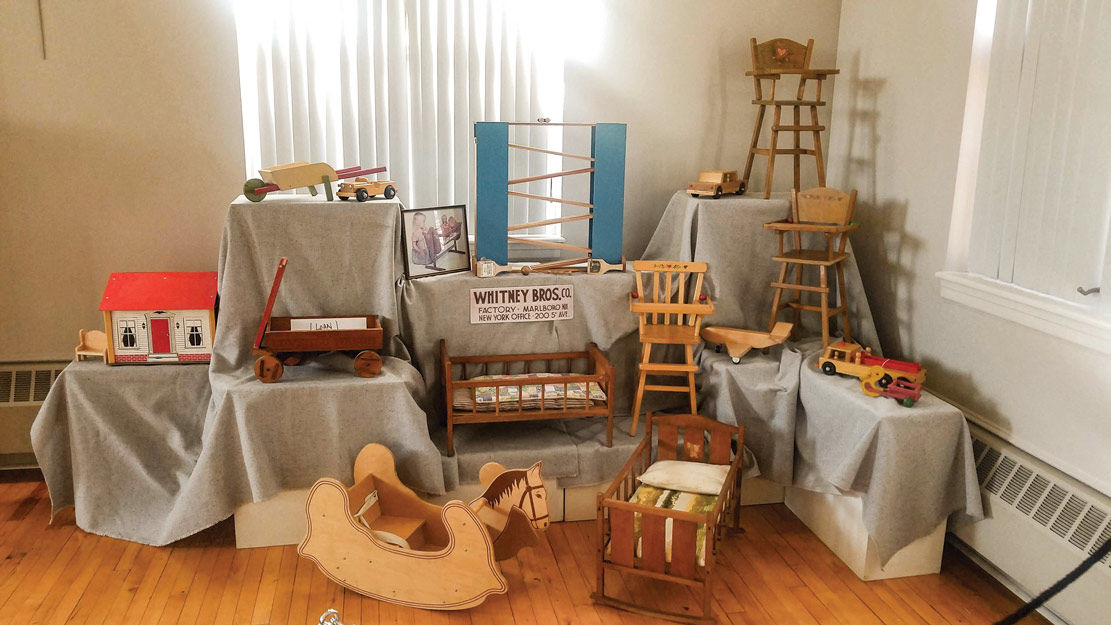 A re-creation of a Whitney Brothers trade show display from the mid-20th century. 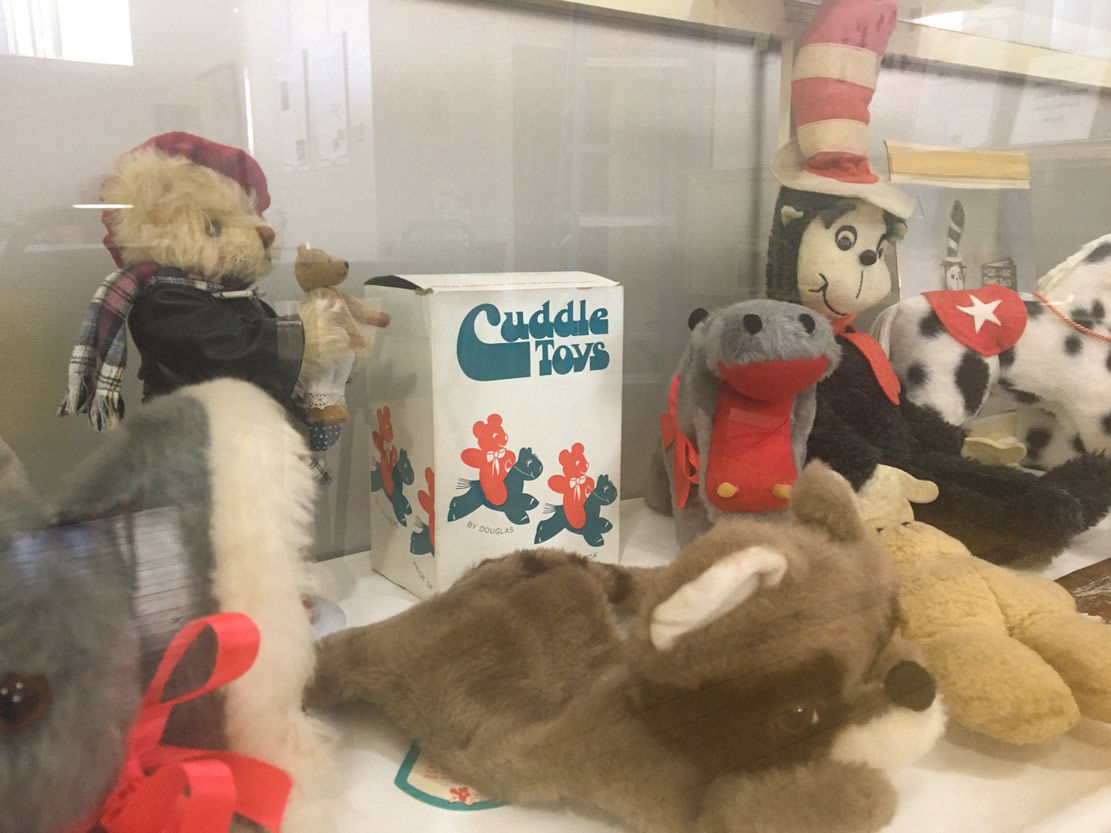 Examples of Douglas cuddle toys dating as far back as the 1950s.

are on display at the Toys exhibit.

A re-creation of a Whitney Brothers trade show display from the mid-20th century.

Examples of Douglas cuddle toys dating as far back as the 1950s.

Toys in the Monadnock region have a long history. And it’s one that the feature exhibit at the Historical Society of Cheshire County – Toys: The Story of Toy Manufacturing in the Central Connecticut River Valley – is aiming to share. The exhibit – on display at the Historical Society’s headquarters, 246 Main St., Keene, through Saturday, April 18, before moving to the Monadnock Center for History and Culture in Peterborough and on to the Brattleboro Historical Society in Vermont – spans the mid-1850s to present day and includes approximately 25 manufacturers from New Hampshire and Vermont.

The earliest record of a toy factory in the Central Connecticut River Valley dates to 1858, when the Ellis, Britton & Eaton Company of Springfield, Vt., was one of two such companies incorporated in the region. It became nationally recognized for its manufacture of children’s carriages and toy carriages – the wooden wheels were also built and sold to other toy manufacturers across the nation. Examples of the company’s doll carriages can be seen at the Toys exhibit.

As many as 20 wooden toy manufacturers were located throughout the Central Connecticut River Valley of New Hampshire and Vermont between the 1870s and the 1930s. In the Monadnock region of New Hampshire alone, listings for wooden toy manufacturers during the era have been found in Troy, Hancock, Swanzey, Marlborough, Rindge, Winchester, Wilton, Keene, Jaffrey, Peterborough and Hinsdale. Whitney Brothers began making wooden toys for early learners in 1904 in Marlborough, N.H. – an historic display of their products is also part of the Toys exhibit.

A recent program at the Historical Society featured the former president of Whitney Brothers, David Stabler, who discussed the company’s history. In 1961, his father, Griffin, saw an ad in the Wall Street Journal – the owner of a toy company in New Hampshire was seeking an equity partner. In 1962, the Stabler family invested their savings in Whitney Brothers as co-owners. Much of the water-powered system was still at the factory in Marlborough.

“I recall the large wheels of the machinery. An operator would attach the belts to the wheels with a stick to turn on and turn off the machines,” Stabler said. “I found it curious that you could look down in the men’s room company toilet bowl and see the Minnewawa River.”

Its current president, Mike Jablonski, also presented at the program about current high-tech manufacturing methods. And the grandson of one of the original Whitney Brothers, Richard Whitney, read from an interview with an employee who had worked at the company from 1928 to 1983, retiring when she was 73 years old. Several former employees attended the program, as well, including the office manager and corporate secretary, Cherolyn (Cherry) Robinson, who worked at Whitney Brothers for 34 years, from 1958 to 1992.

Today, located in Keene, Whitney Brothers is a leader in the marketplace with its manufacture of wooden toys, children’s furniture, school furnishings, cribs and accessories. Locally, you can see their present-day products at the Keene Day Care Center, Montessori, the YMCA, and the Waldorf School.

In the 1880s, the Triumph Wringer Company began making beautifully casted iron toys in Keene. This business became so successful that the wringer and other lines were set aside, as the company became the Wilkins Toy Company in 1890. They produced cast iron toy vehicles including trains, steamboats, carts and horse-drawn carriages. Kingsbury Manufacturing Company of Keene (successor to Wilkins Toy Company), replaced its cast iron line of toys with pressed steel varieties of things like fire trucks, automobiles, banks, garden tools and other items by the 1920s. Dozens of Kingsbury toys are featured in the Toys exhibit, and the Kingsbury Manufacturing Company is one of the themes of the Walldogs murals in downtown Keene.

Toy history takes the spotlight on Wednesday, March 18 at 7 p.m. at the Historical Society, with a 30-minute documentary by Boston-area filmmaker Peter Frechette about Kingsbury Toys.

“I think the film captures the history of the company and the ingenuity and originality of Harry T. Kingsbury,” Frechette said. “The company was well known for its wind-up motorization, its technical tool innovations and its attention to detail when creating duplicates of full-sized vehicles.”

In the documentary, the Historical Society’s director Alan Rumrill shares some of the history of the Kingsbury Toy Company. The film also features interviews with David Frechette, who is one of the top collectors of Kingsbury Toys, and Rich Bertoia, who is one of the premier toy auctioneers in the country. Admission is free and the public is invited. Share your favorite Kingsbury Company stories over popcorn and good company.

Today, several companies in the region continue to manufacture toys and children’s play furniture. Some of them are even available at the Historical Society’s Museum Store. For example, inventory includes stuffed animals from the Douglas Company in Keene; potholder looms from Harrisville Designs; and Cooperman’s “History Lives” traditional toys from Bellows Falls, Vt.