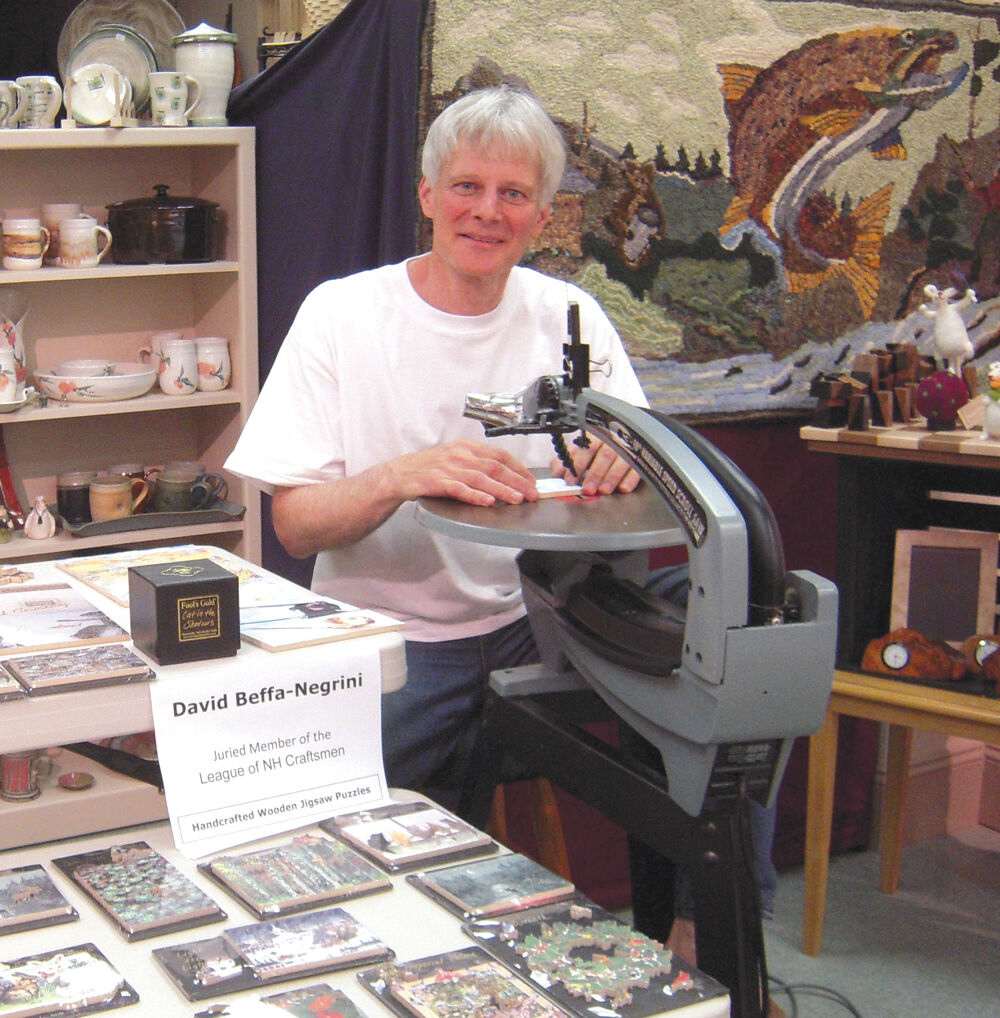 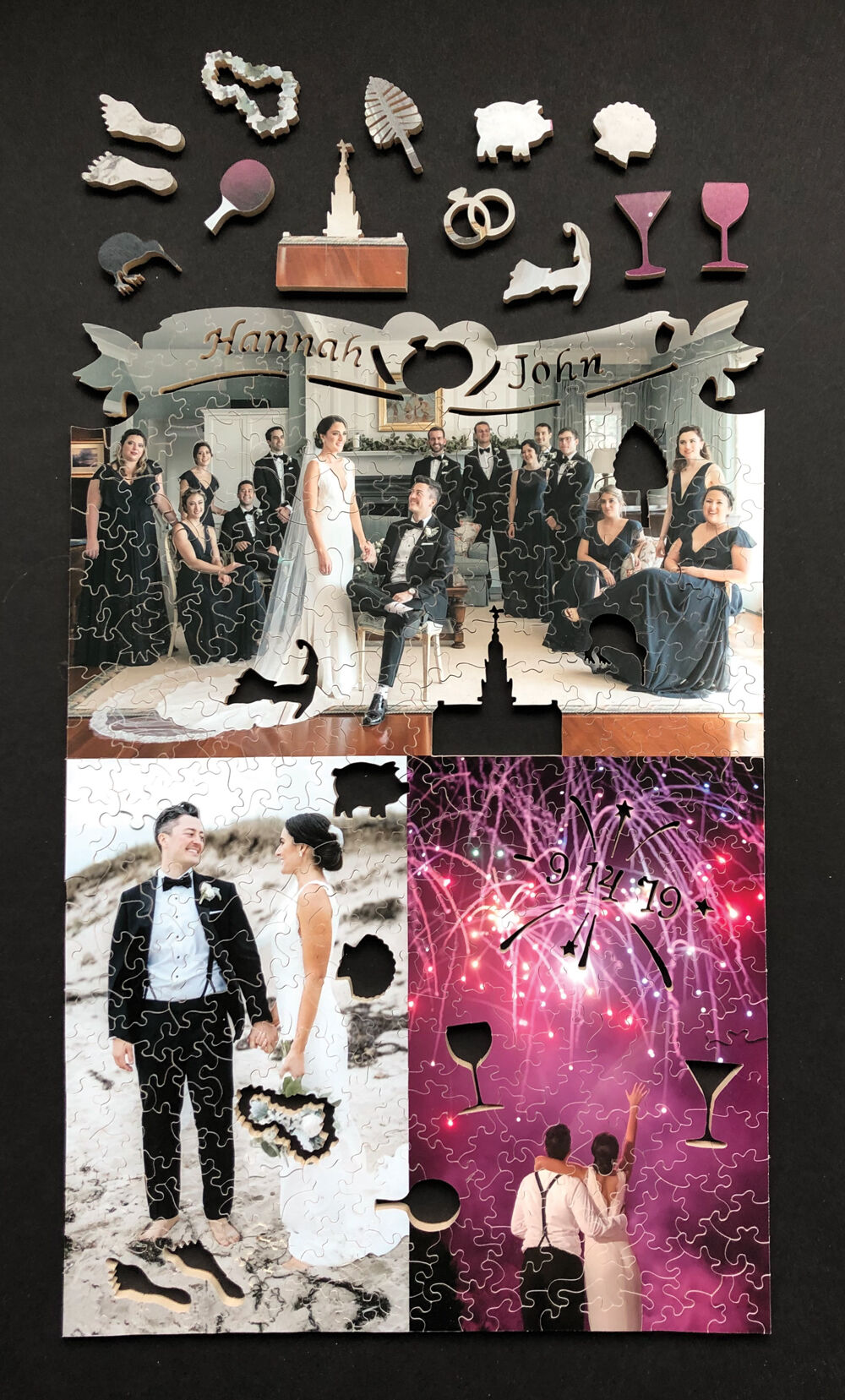 Life can change in the blink of an eye. David Beffa-Negrini discovered that just over 20 years ago on a plane to San Francisco.

The Harrisville resident for several years had been part of the computer world. During that time, he regularly traveled to the west coast for the Macworld Expo. It was one trip in particular — around the mid-1990s — that changed everything. Beffa-Negrini grabbed an “Airways” magazine on his American Airlines flight and started reading an article about a man who was cutting his own custom, wooden jigsaw puzzles and selling them for thousands of dollars.

“It was really interesting,” he said. “But I just couldn’t connect how someone would pay a thousand dollars for a jigsaw puzzle because [I] grew up with cardboard puzzles from Milton Bradley.”

In efforts to learn more about the craft, he visited the puzzle maker he’d read about in the “Airways” article after discovering the man was from Vermont. According to Beffa-Negrini, this is where his passion began.

“Ultimately, I got into [puzzle making] because I saw a magazine on a plane,” he said. In 1997, he opened Fool’s Gold, a Harrisville-based business specializing in the creation of custom wooden jigsaw puzzles.

Manufacturing wooden puzzles is best done with a scroll saw, as it has a fine blade that works very well for cutting intricate curves and shapes in wood and other materials — it’s able to cut more delicately than a jigsaw, which is commonly used in other woodworking projects. Beffa-Negrini already owned a scroll saw at that time, so decided to try it out. He began making puzzles and giving them as gifts to family and friends.

“Those first ones were terrible though,” he said. “They were kind of rough, but I had just started out. Over time, as I practiced, I got better.”

Many puzzle makers use plywood, given its enduring strength; Beffa-Negrini opts for a different route, calling on what he’s learned through collecting vintage wooden puzzles.

“I’ve always used, from day one, a product that was used back in the ‘30s… solid basswood. It’s a lighter wood [than plywood] but harder and very stable,” he said, noting that too often, plywood has voids in it. And while they’re filled in before being purchased, it’s still common to “hit those voids when cutting, and that’s not a good thing.”

Beffa-Negrini makes puzzles to order. Customers provide him with a photo or image, which he prints out onto archival paper made specifically for a dry-mount press. Backing a piece of basswood with a mahogany veneer, he applies the paper to the wood — this is then heated up, which essentially adheres it to the wood, sandwiched between the photo/image and the wood.

“A lot of the work is in the preparation,” he said.

To begin creating the actual puzzle, Beffa-Negrini typically cuts about two puzzle pieces per square inch of wood using the scroll saw, which works similar to a sewing machine. Larger pieces have been cut for younger kids and also for people’s special occasions such as weddings, birthdays and graduations.

“You name it, I’ve done it,” he said. “Anything from A to Z basically. If you have a picture, I can print it, mount it on the wood and make a puzzle.”

Once it’s finished, Beffa-Negrini sands it all down and wipes it with tung oil on it to protect the wood. This costs a bit more, he said, but results in a quality, long-lasting product.

One of the most unique requests he’s gotten was from a man near Concord, whose daughter was getting married. The man provided the wood he wanted to use — a 4-foot by 4-foot piece in the shape of a maple leaf — to be cut into about 150 pieces.

“That thing weighed about 11 pounds,” he said, adding that it was so big, he had to purchase a larger scroll saw to complete the project.

On every puzzle he creates, Beffa-Negrini adds his signature and the date on the back, as well as a small image of a jester to make it easily identifiable as “a signature piece.” This ties to his business’s name: Fool’s Gold, which is a play on his last name. The name dates back to the early 1500s, when two prominent families came together. Beffa translates to “joke,” he said, “like a baffoon.” From there, his idea for a clever business name evolved into Fool’s Gold, a term sometimes associated with fun and frivolity.

“You need [your puzzles] to be identified by a signature piece,” Beffa-Negrini said, noting that in addition to “marking” his puzzles, he has custom, matching boxes made for each. “A lot of people [in the 1930s] just used whatever box they had to put the puzzle in. They didn’t have custom boxes. A lot of times with those older puzzles, the boxes go missing or aren’t labeled. When you’re collecting puzzles, you want to know who cut a particular puzzle. So, down the road, if someone has a Fool’s Gold puzzle and they lose the box, they’ll still know by that little jester who would have cut it and created it.”

Beffa-Negrini has connections with “pretty much everyone in the U.S. who does this [craft], and some in foreign countries.” Groups of them come together every couple of years to connect and discuss their work and ideas. He also belongs to the New Hampshire League of Craftsmen.

And he has become well-known for his creativity.

“I love the creativity with making these puzzles,” he said. “What’s fun is what you can do, depending on the customer — if they’re an expert puzzler or if they’re a novice, or they want to give a difficult puzzle to somebody — there are various ways to cut it.”

Every Fool’s Gold puzzle is unique yet has become identifiable in its craftsmanship, according to Beffa-Negrini. Just look for the jester.