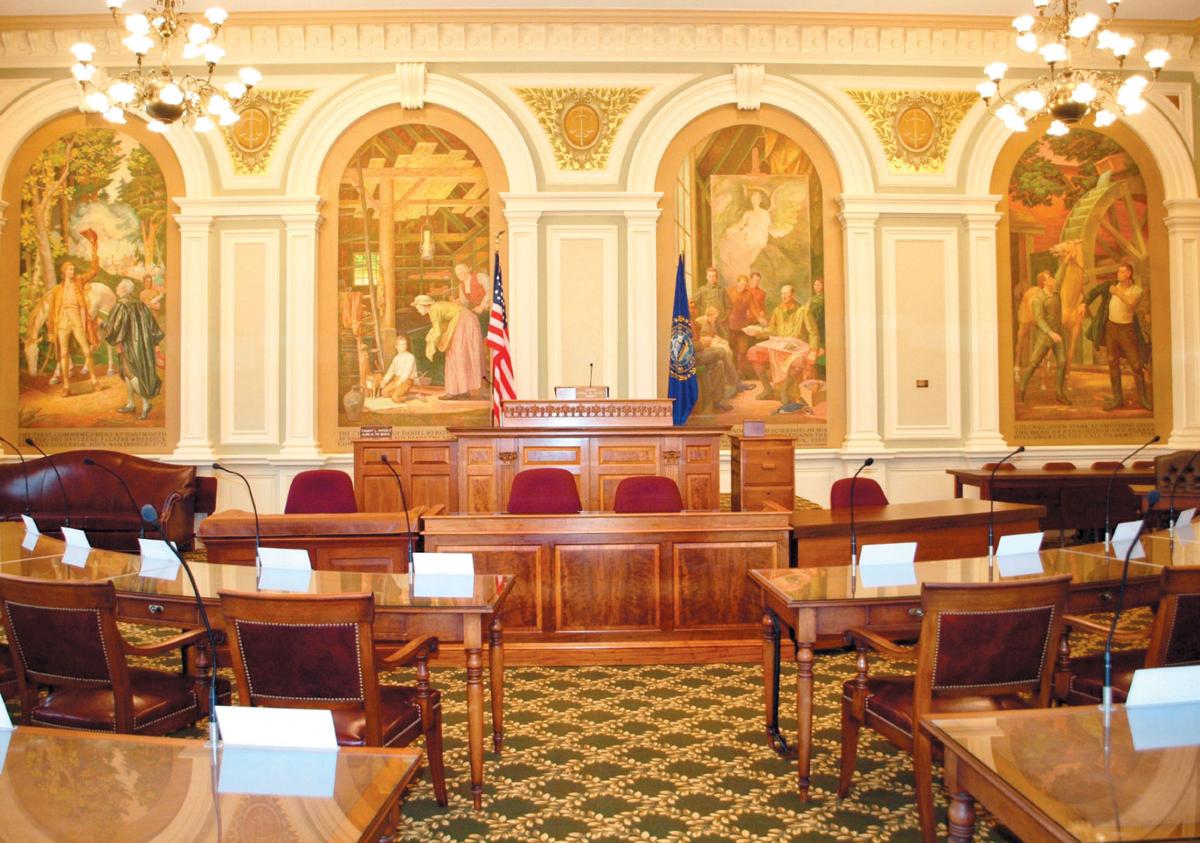 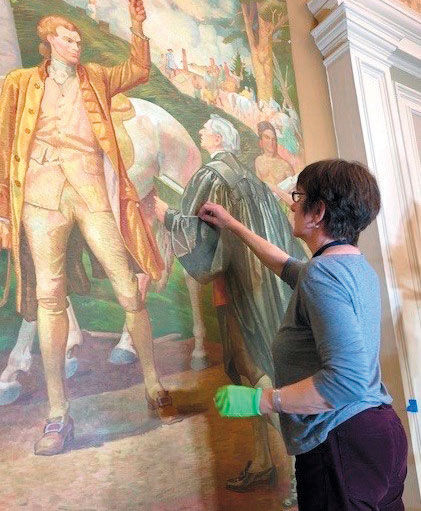 Martha Cox of Great Works Painting Restoration is shown restoring a Faulkner mural at the N.H. State Capitol that depicts the commencement of Dartmouth College.

Martha Cox of Great Works Painting Restoration is shown restoring a Faulkner mural at the N.H. State Capitol that depicts the commencement of Dartmouth College.

One of Keene’s favorite sons, muralist Barry Faulkner (1881-1966), was featured this month on “NH Chronicle.” Faulkner is known widely for the murals he painted at the National Archives in Washington, Rockefeller Center in New York and many other buildings, including several locations in Keene.

The “NH Chronicle” piece highlights Faulkner’s murals that have hung for 75 years in the Senate chambers at the New Hampshire State Capitol since they were painted in 1942. One of them depicts the first commencement of Dartmouth College in 1771. Another shows Daniel Webster as a young boy reading the U.S. Constitution.

A third shows the artist Abbott Thayer and his circle in his studio. A fourth shows General John Stark preparing for battle in the Revolution.

Martha Cox, a painting conservator from Shapleigh, Maine, appears in the “NH Chronicle” story. She restored the Faulkner murals in conjunction with preparations for the celebration of the State Capitol’s 200th anniversary this year. Cox said she loved working with Barry Faulkner’s art.

“His use of color and active brushwork make for engaging and dynamic images,” she said. “His attention to detail even at this scale is so wonderful.”

Cox’s job was to remove the more than 75 years’ worth of dirt and grime that had accumulated on the murals. She used an aqueous cleaning system – water as solvent with an added chelating agent to help break the bond between the oxidized dirt and the paint.

It took Cox six weeks of careful work to restore the vibrancy of colors that the murals had when Faulkner painted them. Cox read Faulkner’s autobiography to become more familiar with the artist and his work.

“The enthusiasm he had for life, for his work, his family, his friends and his hometown of Keene is so pronounced,” she recalled. “It was truly a delight to read about all of this at the same time that I was working on his murals.”

The “NH Chronicle” story also features an interview with Carl B. Jacobs, Jr., who is a Keene City Councilman, a trustee of the Historical Society of Cheshire County, a local musician — and Barry Faulkner’s great-nephew. In the “NH Chronicle”piece, Jacobs talks about Faulkner’s murals at the National Archives.

“I think that’s something,” said Jacobs, “that in one room there is the Constitution and the Declaration of Independence and two murals by a guy from Keene, New Hampshire. I just love that.”

“I received many comments on how well done it was, and how new aspects of Barry’s life were brought to light for people.” he said of the show.

For example, “The David Letterman Show” used to open with a shot of Faulkner’s mosaic at Rockefeller Center and pan up the building. Jacobs will be giving a talk on Faulkner this spring as part of Keene State College’s CALL Program (Cheshire Academy for Lifelong Learning).

Many connections to Barry Faulkner can be found at the Historical Society of Cheshire County. Visitors can view a mural that depicts the opening of the Cheshire Railroad in 1848, and an oil study for the 79-foot-long mosaic at Rockefeller Center in New York City.

The collections of the Society contain a number of Faulkner’s paintings, drawings, studies for his famous murals and many documents and original manuscripts related to his work and family.

The HSCC website (hsccnh.org) has a Keene self-guided walking tour of Faulkner’s sketches, paintings and artifacts. The tour starts at the Historical Society’s headquarters, where many of Faulkner’s paintings, family photographs and artifacts such as easels and brushes are on display. It continues to Elliot Hall at Keene State College, where there are murals of Central Square.

It goes to the Bank of America at Central Square, where there are three murals of the “Men of Monadnock:” Ralph Waldo Emerson, Henry David Thoreau and Abbott Handerson Thayer. And it concludes at the Keene Public Library, where there are four large-scale drawings.

The Historical Society of Cheshire County is located at 246 Main St. in Keene. The organization has been collecting, preserving and communicating the history of Cheshire County for 92 years. The society puts on about 150 programs each year to help people of all ages “find their place in history” and is open Tuesday, Thursday and Friday, from 9 a.m. to 4 p.m.; Wednesday, from 9 a.m. to 9 p.m.; and the first and third Saturday of each month, from 9 a.m. to noon. For more information, visit hsccnh.org or call 352-1895.