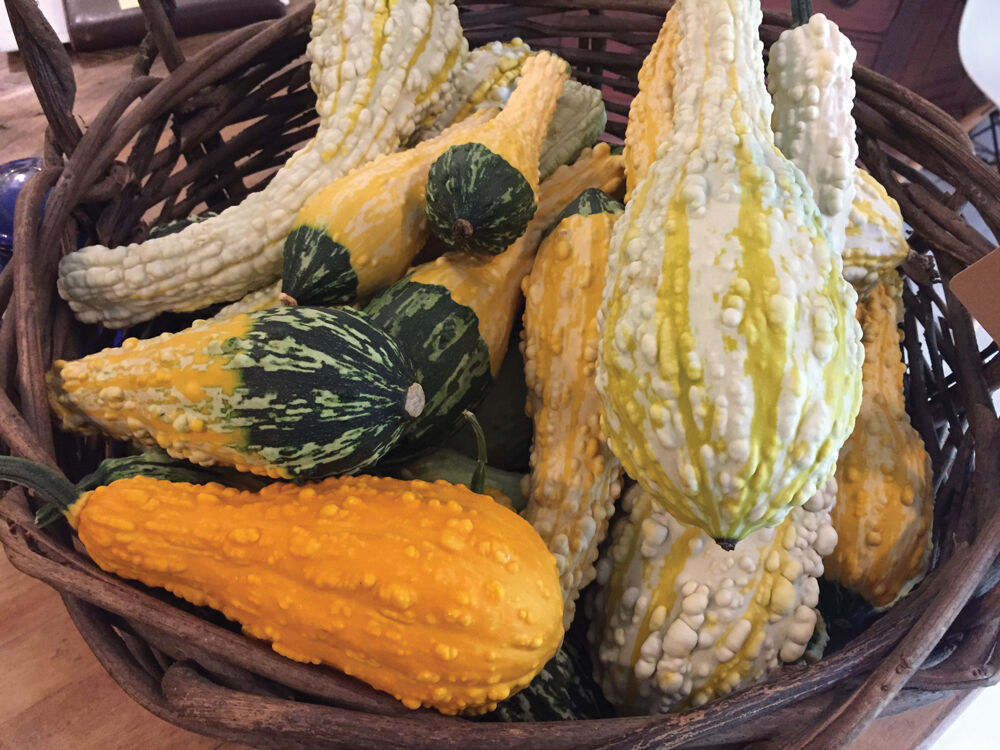 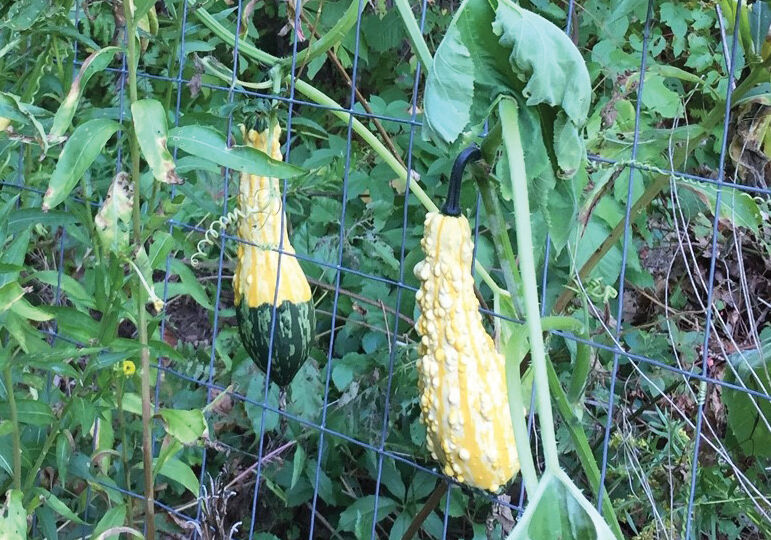 Last year I planted a container with gourd seedlings just to see what they’d do. I’ve always liked a bowl full of funky shaped gourds on the dining room table in the fall and I purposely placed the big container next to the fence that surrounds my enclosed vegetable/flower-cutting garden. Sure enough, the plants soon reached right over the edge of the pot and started climbing the wire. They also spilled out on to the lawn that surrounds the garden.

I’ve always loved that about pumpkins, gourds and cucumbers… the way they just say, “Hey, I’m just going to stretch out here a bit. You don’t mind, do you?” And off they go. I always mow around them, which leads to a bit of a choppy looking lawn. But this is a secondary lawn on the property and only gets mowed about once a month, so I don’t mind at all.

The plants produced a couple dozen gourds… either crooked neck, bumpy yellow ones, crooked neck yellow with a green bottom or white egg-shaped fruit. I gathered them all in a wonderful old steel colander I’d found at an antique store and onto the table they went. Just about the time I start feeling the Christmas spirit, I give them the heave-ho into the compost pile.

Early this spring, my young female collie slithered by me as I was opening the gate to the compost pile and grabbed a gourd. After being out on the pile for the entire winter, the few gourds I could see were still intact. When I picked one up, it was light as a feather and had a neat rattling sound when shaken. The gourds had completely dried and left just the shell with the seeds still captive inside. The dog loved flipping hers around the yard and I got a certain childish pleasure at stomping on a few in the compost just to hear them crunch.

In June, I noticed a plant growing in the compost pile and I knew it had to be either a gourd or a pumpkin since I always toss a couple of pumpkins I’d used as fall décor in there as well. Fast forward about six weeks… the plant had discovered the wire fence that surrounds my compost pile and it had gone to town. Dangling from its big, juicy stems were little crooked neck gourds all over the length of the fence. Very cool! I’ve seen photos of a whole canopy of gourds you could walk right under too. What a fun, inexpensive garden project that would be, especially if you have kids.

So, ok, gourds are cool ornaments but is there anything else we can do with gourds? Can you eat them? I did a little research and found a good article at davesgarden.com — “Gourd History and Growing Gourds” by Melody Rose. Gourds, from the genus Lagenaria, are believed to have originated in either Asia or Africa. Evidence has placed their intentional domestication and use as tools and implements by humans to at least 13,000 years ago. The first use was simply as a scoop or vessel to hold liquid. Dried, hollow gourds were eventually used for everything from birdhouses to animal traps, fishnet floats to beehives, art objects to musical instruments. An interesting observation was that it’s very possible that some of those dried gourd fishnet floats could break lose and travel the seas for days, planting themselves on an all-new continent… similar to the spread of some coconut palms in tropical regions.

Gourds are eaten in African, Indian and Asian cuisine. Harvested young before their skin begins to toughen, they add a bitter complexity to some foods. Rose’s article also mentioned two other interesting uses. One was in China where two halves of a hollow gourd would be placed as a mold around a young gourd to create a two-layered piece of art. I can’t quite wrap my head around what the appeal was but apparently some very intricate designs resulted.

Another kind of hazy use of gourds was during the U.S. Civil War. Gourds were very familiar to everyone as a dipping utensil for water, hence the term “dipping gourd.” A clever learning device helped escaped slaves find their way north by singing a song called “Follow the Drinking Gourd.” It was a reminder to these people fleeing for their freedom mostly at night to look up and follow the direction of the big and little dippers to keep their course on a northward track.

I now have an even higher regard for gourds, and I think I just might try a “tunnel” of dangling gourds next year. There are tons of different varieties to be found and they all can be grown easily from seed. So, why not?