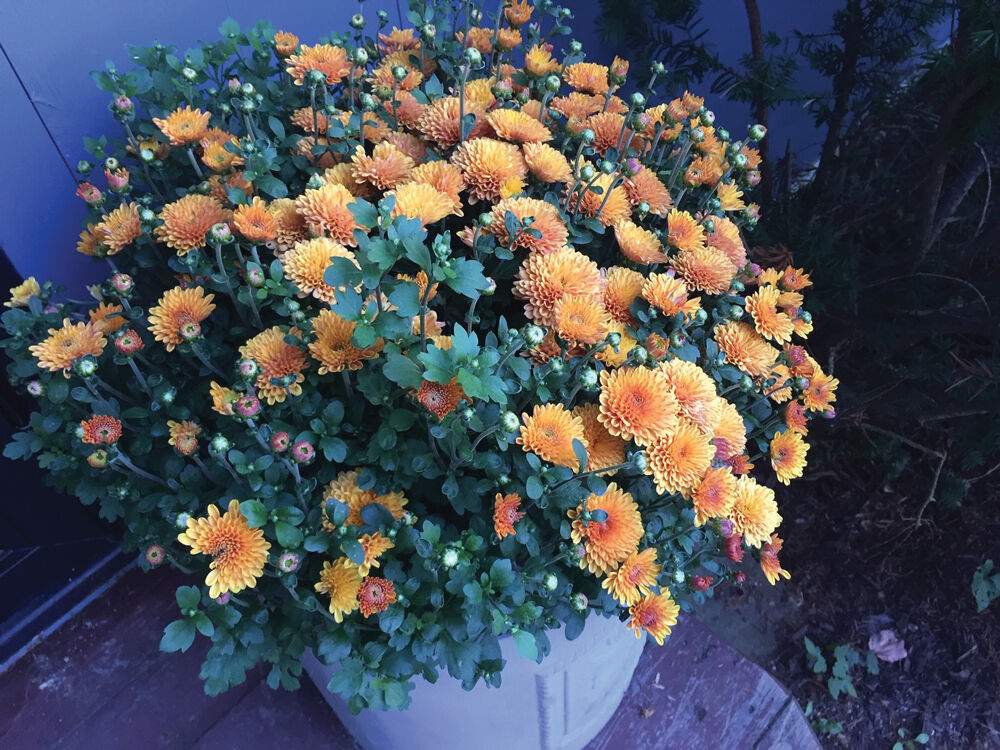 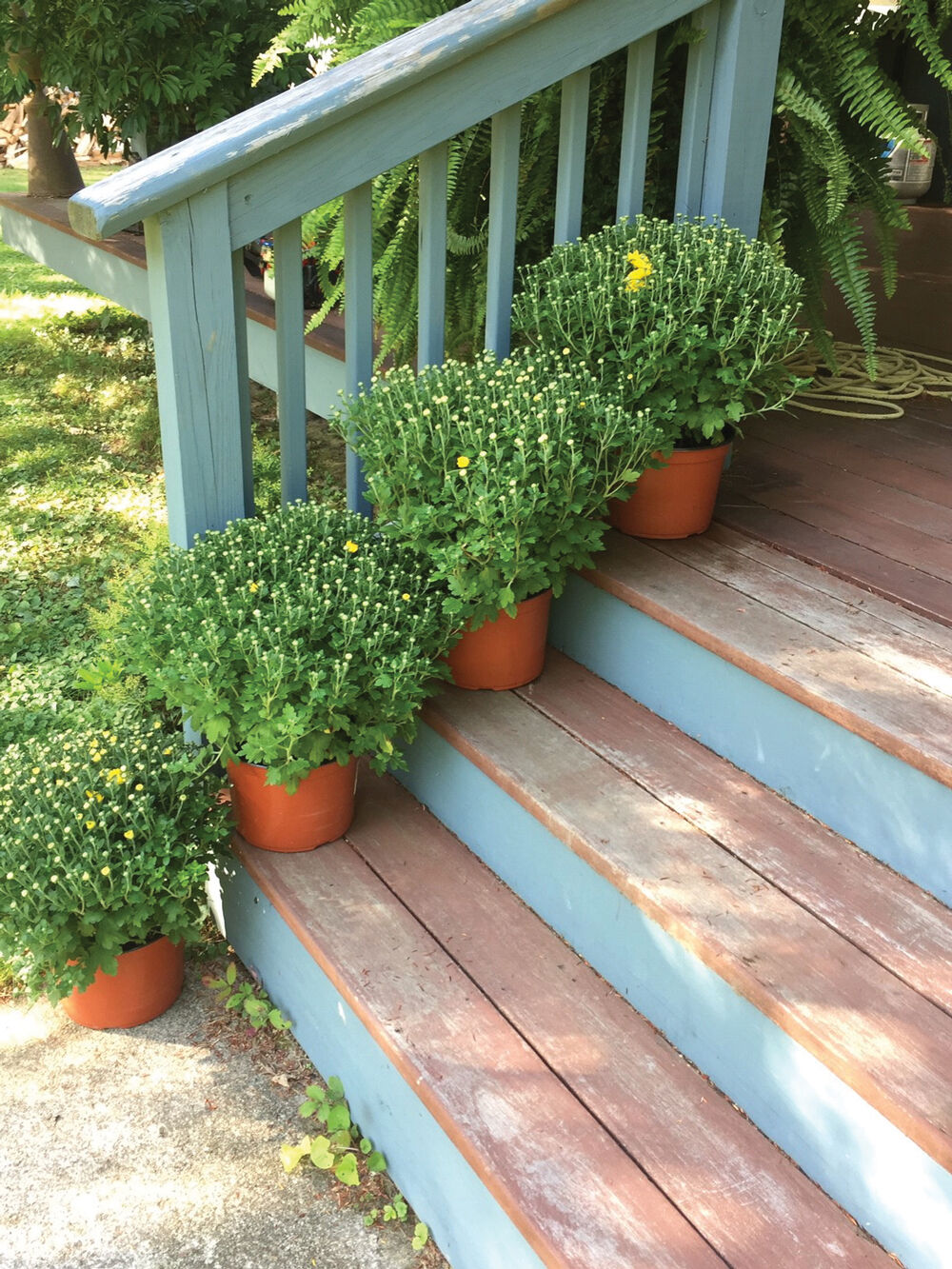 Well, the fall garden rush is on for me. As I write this a week ahead of publication, I see lows forecast all the way down to 32 over the next few days. That means I’ll be scrambling to move plants indoors.

Ficus, ferns, agave and a geranium my Mom loved all come in the house. All of the Agapanthus gets sheared back and goes in the chicken house/greenhouse… also known as the house of chicken dander dust! I’d love to bring the bay tree and weirdly shaped, mature rosemary in the house, but they hate the dry heat so out they’ll go to the chicken house too. The big, soaring pots of cleome “Rosalita,” tall blue salvias and gorgeously robust coleus will remain until the first good frost knocks them down.

Standing sentry near my big containers of annuals are now four pots of yellow mums. I got them at Market Basket a couple of weeks ago… just barely showing tiny peeks of color. Kept in full sun and decently moist, they should open up to a wonderful blast of color. Only a couple of times have I bought mums in bud that failed to ever open, but it can happen sometimes.

I’ve often wondered if it’s the result of growers using plant growth regulators or chemical growth retardants, which I didn’t even know existed until I visited a wholesale greenhouse a couple of years ago. It sounds counterintuitive but makes sense for commercial growers. You and I might start our bedding plants from seeds indoors in early spring only to be dissatisfied when they either become too leggy and spindly or already start to bloom before you’re ready. Commercial growers want their plants to arrive at retail stores in the most perfect, market-ready appearance and often that means a plant’s growth must be regulated (slowed down). I have no idea if this has anything to do with the occasional mum I’ve bought that just stagnates loaded with buds or not, but I wonder.

Chrysanthemums are a wonderful way to extend our enjoyment of the garden world. They’re a late-summer bloomer and can withstand a few light frosts before their blooms blacken. Along with some gourds, pumpkins, potted asters, kale and cabbage plants, it can all add up to a reset of sorts just when our summer annuals are giving up the ghost.

I have two complaints about mums that persist year after year. First of all, the mums we buy are considered hardy mums. Well, here in northern New England, I’d call them half-hardy at best. A couple of times, I’ve planted them directly in the garden, even planning on them being a late blooming perennial that would be part of the overall seasonal design. Every time, though, I’ll get maybe one out of three to show any sign of life the following spring and even that one is extremely weak and stressed to the point it just disappears altogether. I’ve seen some “hardy” mums do quite well, however, and it’s always been when planted in a protected environment, like right up next to the foundation of a home where there’s some radiating warmth that keeps the ground from being not quite as cold as out in an exposed garden plot.

I consider mums to be fall annuals now and relinquish them to the compost pile when the show is over. My biggest frustration with mums is the lack of selection. There are a gazillion varieties of Chrysanthemums and many are heirloom, meaning our grandparents probably grew and admired them.

There are two commercial classifications of mums: garden hardy and exhibition. The mums we buy at the big box stores and farm stands are garden-hardy. They’ve typically always received a hard pruning about a month into their growing season to create the perfect round mounds we’re so familiar with and the pruning promotes more flower buds. They are what’s called either cushion or button mums. They come in white, yellow, orange, rust and a mauve-ish pink. If left to grow in their natural state, all mums grow between 18 and 30 inches tall and in a much looser, airy form, producing less blooms than the market-ready variety.

Many types, particularly what are called “football” mums, require staking due to the weight of their flower heads — much like peonies. I can totally understand some of these varieties not being easily mass produced for commercial use. There are other varieties, though, ones that more resemble daisies in their flower structure and some of the smaller recurved petal varieties that could be mass produced. However, just like some of those really cool vintage car styles that make you wonder what’s happened to the visual creativeness that went into car manufacturing, it’s a matter of the most common denominator winning out.

Anyway, enough of that soapbox blather! My friend, Bob, who owns Cheshire Floral Farm in Marlborough, vows to find more varieties of mums next year. I also found a website that grows all kinds of cool-looking mums from cuttings: kingsmums.com.

We’ve got more important things to do than complain about what we wish could be, right? There’s a whole lot of tropical plants waiting to be cleaned up and brought indoors, there are gardens to mulch and put to bed and, as I proclaim every year… we’ve got bulbs to plant! Get out there and buy some crocus, daffodil, tulip and lily bulbs. The first couple of weeks of October are THE time to plant them and you’ll be so happy in the spring that you did.

Intrepid Gardener will return to ELF in the spring, just as those daffodils and crocuses are bursting forth. You’ll find me giving my voice to the Pickin’ & Pokin’ and Nest columns in the meantime. Happy gardening!