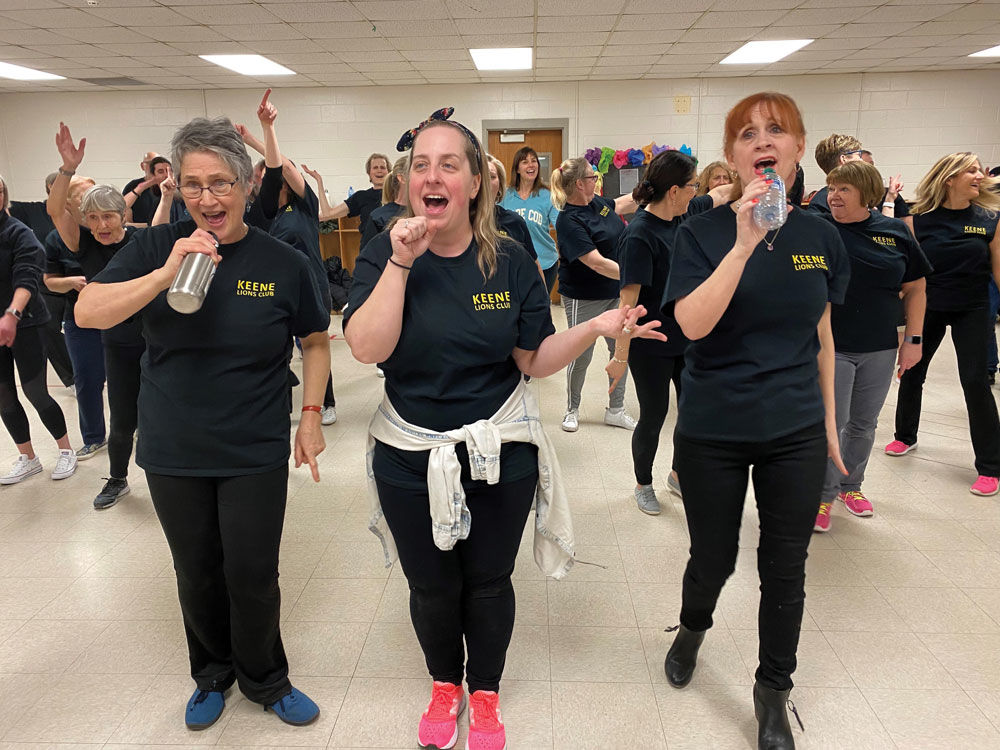 Left to right, Lindsay Bartlett as Rosie, Shana stack as Donna and Traci Booth as Tanya. 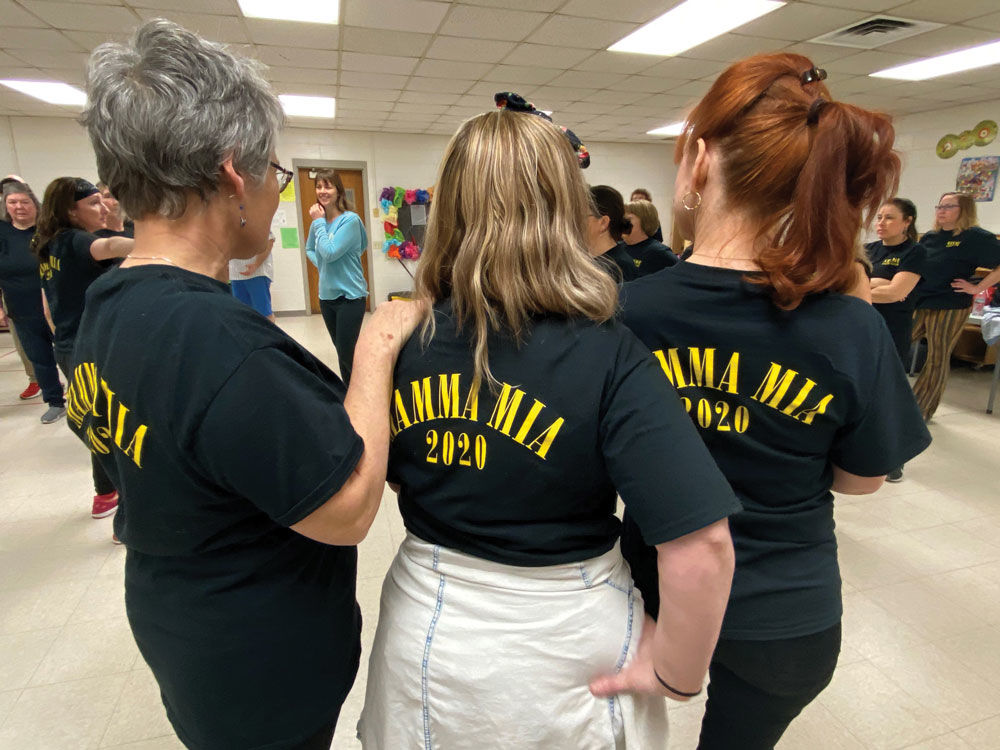 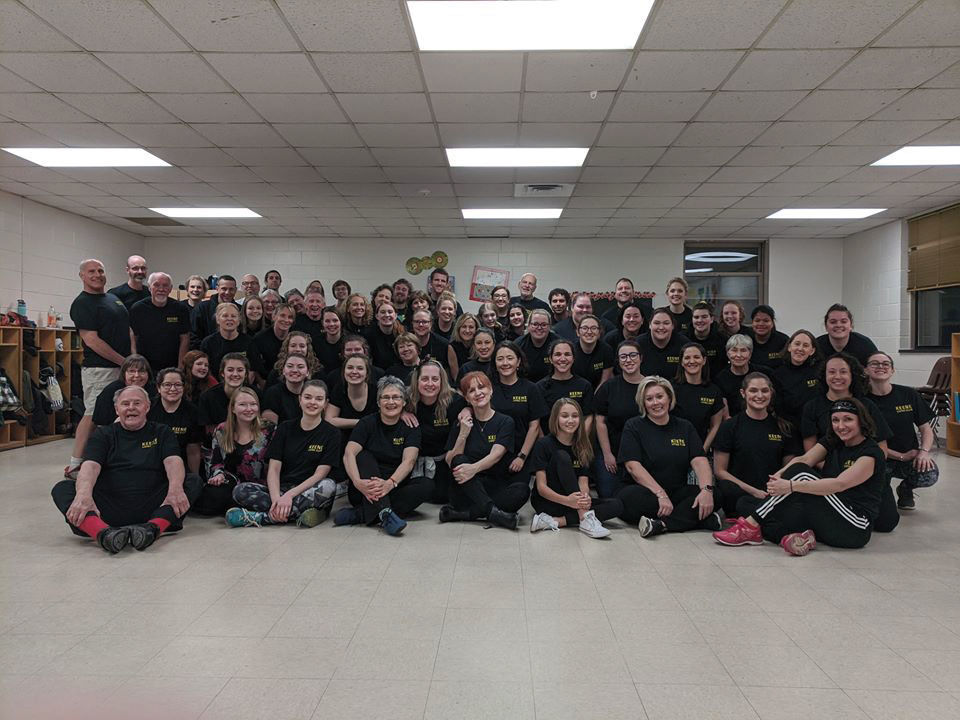 If you played an ABBA album on the jukebox and it came to life in disco-era glory, you’d have “Mamma Mia!” - the Keene Lions Club’s 68th annual musical.

The show, consisting of an all-volunteer community cast and crew, hits the Colonial Theatre stage in Keene for four shows, opening Friday, Feb. 14.

The 1999 Broadway musical, also a 2008 film starring Meryl Streep, has been performed in around 60 countries and has been translated into more than 20 languages.

Based on the songs of Swedish pop music group ABBA (including the title song with additional music composed by group member Benny Anderson), the story follows two generations of friends and lovers.

Sophie (played by Sarah Flower in the Keene Lions show), a 20-year-old bride-to-be, secretly invites three men to her upcoming wedding on the Greek island of Kalokairi, each with the possibility of being her father.

She does this without telling her mother, Donna (Shana Stack Davis), who is hosting the wedding at her villa/hotel with the help of her two friends and former bandmates, Tanya (Traci Booth) and Rosie (Lindsay Bartlett). She knows this information because her mother reveals in her diary she had affairs with all three during a 25-day period.

Sophie hopes that her father will walk her down the aisle on her big day, and believes that after she spends time with them she will know who will fulfill that role.

While the Keene Lions Club often adds roles to the annual musical to accommodate all who want to participate, that was not the case with “Mamma Mia!” No script changes were made - the story is very true to what audiences know from the 2008 film script.

The cast, in 1970s attire (picture lots of glitter and pantsuits) will perform amidst a very large stage-wide set with two levels, and including a dock and taverna similar to what you’d see on a Greek island.

Chartered in 1937, the Keene Lions Club, part of Lions Club International (the world’s largest volunteer service organization) has an average annual membership of more than 90 members and is the second largest in New England. The club has adopted eyesight preservation as the primary focus of its charitable giving.

The annual musical raises an average of $15,000 for the community.

“Mamma Mia!” director Deanna Zilske wrote in her notes that the show attracts diverse audiences for its “vibrant dances” and “uplifting and fun music,” but it could also be said that what draws people from around the world is that is it is “a story about hope, love and what family really means.”

We must adapt to challenges, lean on those we trust and learn from our mistakes, she wrote - but also discover that “we must let down our defenses and allow the dreams and songs of life to carry us through.”

Stack Davis had never seen the film nor the musical when she auditioned for the lead role of Donna and decided to do so last-minute at the suggestion of a friend, who said she needed to do something for herself. Davis, a caregiver and co-owner/operator of a local food truck with her husband, Rick, hadn’t participated in a Keene Lions Club show in 21 years.

While many know her as front woman of The Shana Stack Band, it’s lesser-known that she has a college degree in musical theater.

When Stack got the callback for the role in “Mamma Mia,” she watched the 2008 film to prepare. “I fell in love with the whole thing (after watching it),” she said.

Now, she calls the rehearsal space her home away from home.

“The musical genius of ABBA blows my mind,” she said, noting that the role required a significant time commitment, but her husband told her to go for it.

“I’m amazed at how much time everyone puts in,” she said of the cast. “The spouses are the real superstars - holding down the household and taking care of kids.”