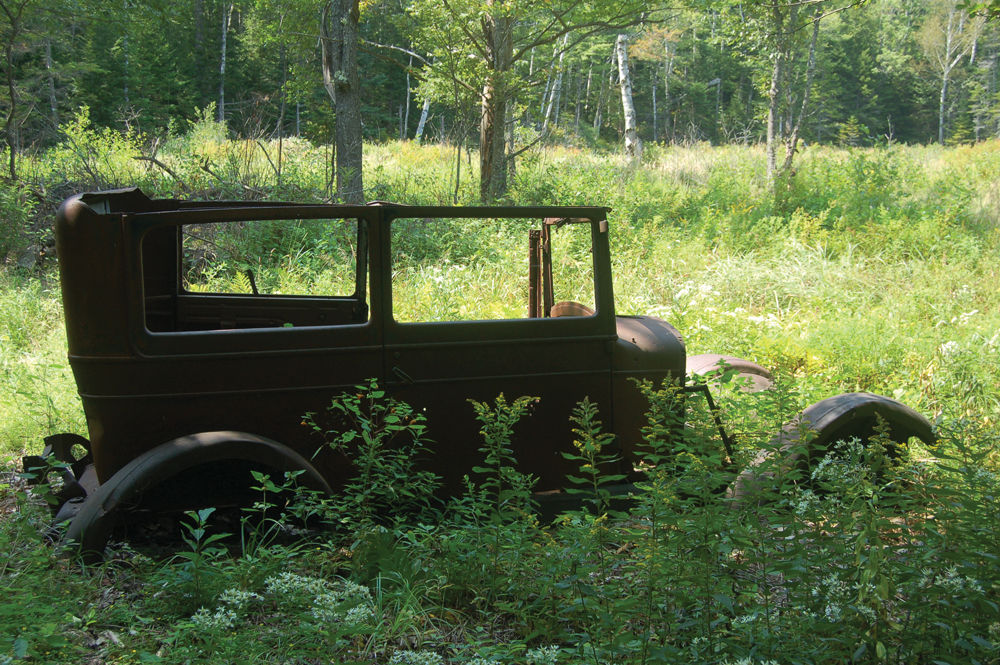 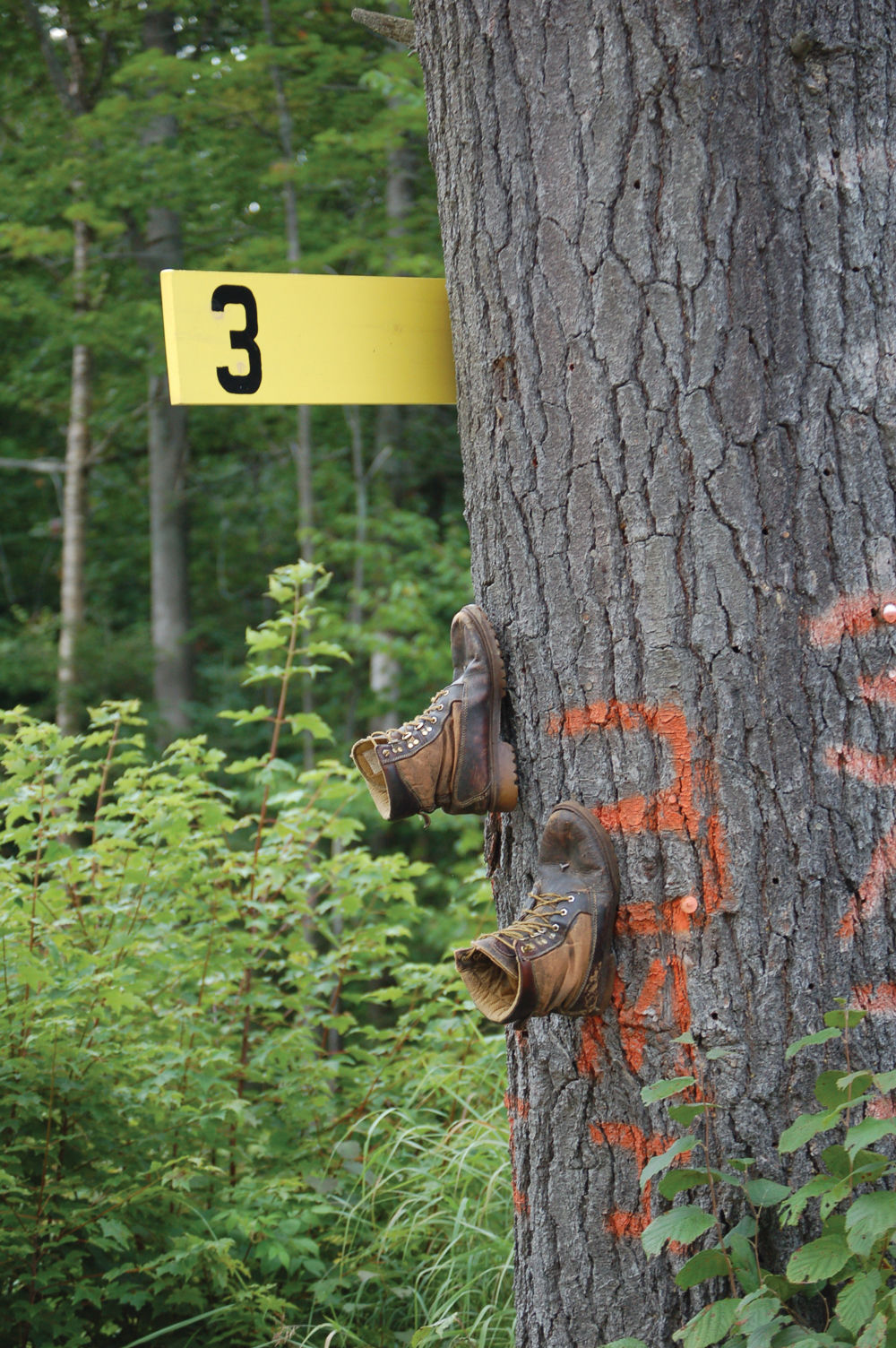 Lost, forgotten and abandoned – there are some interesting items to be found out in the woods. One of the most common discoveries is old automobiles that were taken for a final joy ride and then left where they finally expired. I’ve lost count of how many I’ve discovered, but the one that sticks in my mind was an early 1930s sedan that had a tree growing out through the roof. Almost as common as vehicles are various horse-drawn farm implements like hay rakes and such that were discarded when no longer useful or obsolete.

A bit more unusual are the wild graves, slate stones long forgotten. I found my first pair in the woods near our home in Massachusetts when I was a child. I’ve discovered many more since. Often, these burials took place at homesteads that disappeared long ago to be replaced by forest. In more modern times, the stones commemorate the place where someone’s ashes were spread.

Those old homesteads can usually be identified by tumbled in-stone foundations. When I find one, I look for the stone-lined dug well nearby. Sometimes they’re covered to protect passersby and wildlife; often they’re open, so it pays to watch where you step. And if it’s the fall time of the year, I look to see if there’s an apple tree or two nearby. If I can find an apple, I’ll take a bite to see if I can identify the variety, which is often some heirloom type lost to history.

Chairs are pretty common, both regular and patio varieties, sometimes wooden, sometimes metal. When I find one, I know that it’s likely some deer hunter from the past sat there waiting for a buck to show. The most unusual deer stand I’ve found was a large flat rock placed in the crotch of a huge three-trunk oak tree. It had been there so long the tree had grown into the stone. It was only a few feet off the ground, and I climbed aboard to see what had interested the hunter. That extra height gave a perfect view of a nice grove of oak trees where deer came to feed on the acorns.

One thing that often gets left behind is barbed wire. The farm may be long gone and the fields grown back to woods, but that barbed wire that once kept livestock in often remains. It’s not unusual to see it entering one side of a large tree and coming out the other side.

Trees hold a lot of surprises. I once looked up at a big pine and saw a piece of chain with a ring on the end growing out of the tree. I walked around the other side and found the rusted leg-hold trap hanging out there. I suspect some long-ago trapper slung the trap over a branch and either forgot it or couldn’t find it again.

While on a moose hunt up north in Success Township, I found a pair of work boots nailed to the tree that also held the mile marker three on that gravel logging road. I never heard the story that went with it, but I suspect it might have been some logger’s retirement statement. Back in the days of the river log drives when a riverman lost his life to the river and logs, it was tradition to nail his spiked boots to a tree at the spot he died. I don’t think anyone has found one of these shrines in a while.

I once found a pot plot that had already been harvested. I came across a gallon jug of water and a roll of heavy-duty plastic trash bags and that made me look around. The plants had been hidden from view, scattered in a growth of young pines. Unlike some other hunters, I’ve yet to find a meth lab.

Something else I’ve never found is a dead person. Hunters looking for deer signs stumble on human bodies on a fairly regular basis. Sometimes it involves a crime, although more often it’s a suicide or heart attack victim. Back in the early 1990s, Stella Dickerman went missing in Rindge. A lifelong hiker who suffered from Alzheimer’s, she remained missing for many years until a pair of hunters found her skull and solved that mystery.

Stuff falls out of the sky too. It’s common to find the remains of those Mylar party balloons out in the woods. A couple of my friends have come across weather balloons and their instrument packages. Now and then it’s an aircraft. The wreckage of a WW II bomber that crashed in 1942 litters a remote spot on Mount Waternomee in North Woodstock. A missing Lear Jet with two people inside crashed on Christmas Eve in 1996. That wreck eluded searchers for three years until a timber cruiser found it near Smarts Mountain in Dorchester, N.H. There are airplane wrecks scattered throughout the state, including the DC 3 that hit Mount Success in 1954.

When someone who found a 50-year-old milk bottle deep in the woods posed the question: “What’s the interesting item you’ve found in the middle of the woods?” on a deer hunting social media site, he got a lot of answers. They included: a surf board, two-man cross-cut saw, bowling pin, number four pool ball, doll head, half a canoe, bowling ball, binoculars 25 feet up in a tree, unopened bottle of blackberry brandy, an old still, axe handle protruding from a tree, four nips of whiskey in a hollow tree, a musket grown into the crotch of a tree 20 feet up, a parachute, people having sex, a pair of boots and a backpack full of hunting gear (looks like someone took them off for a stalk and forgot where they were).