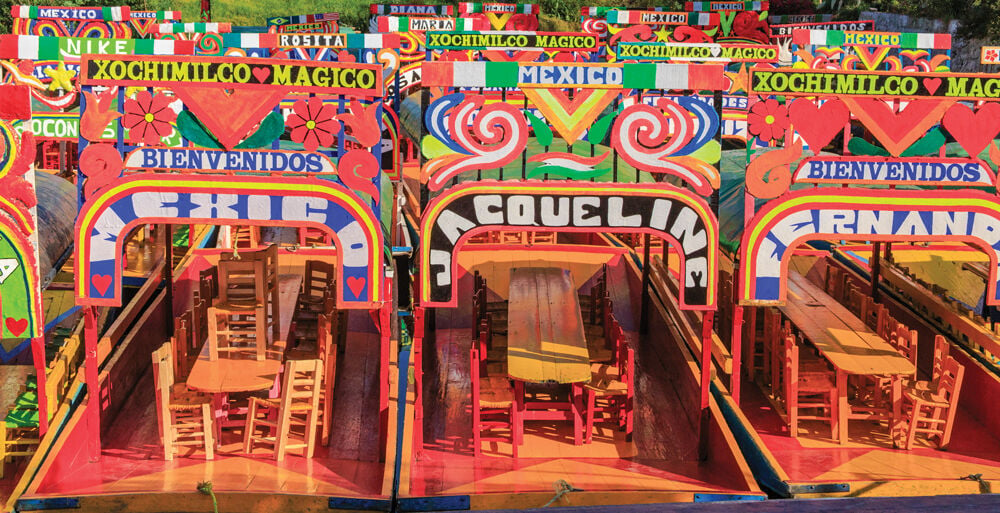 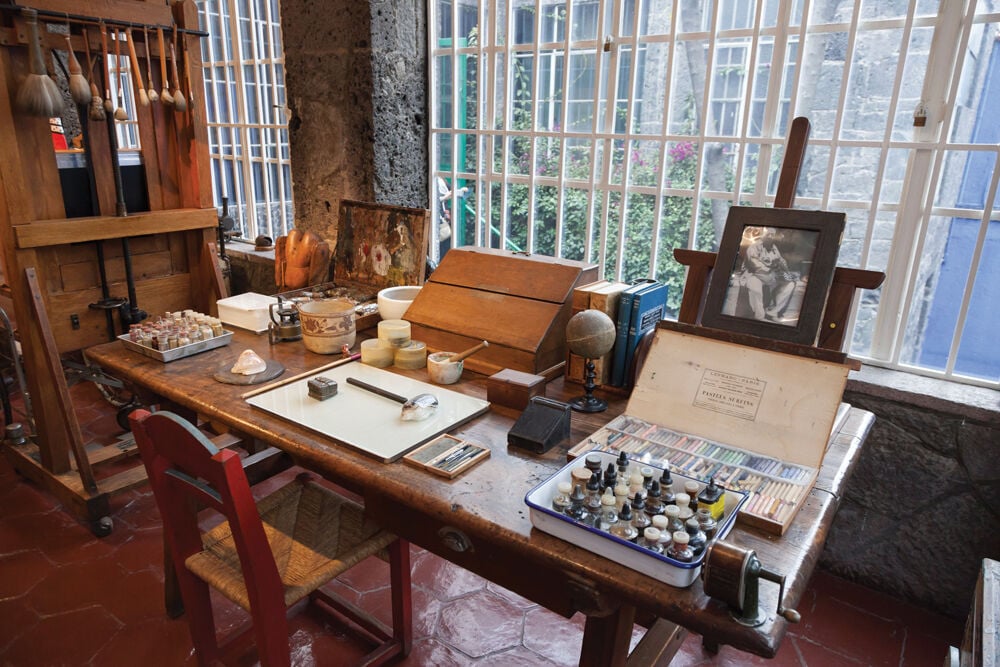 Imagery of cactus, sunflowers, marigolds, dahlias and so many more plants and flowers of every vibrant color surround the visitor, making the exhibit on display in Peterborough the next best thing to standing in Frida Kahlo’s garden.

“Frida Kahlo’s Garden,” an exhibition of the life and work of the iconic artist from Mexico City, is available for viewing through Oct. 20 at Mariposa Museum & World Cultural Center.

Kahlo (1907-1954) is not only arguably the most famous artist from Mexico, she is also considered one of the most significant artists of the 20th century. Her body of work, consisting of some 250 paintings and drawings, relies heavily on the natural world that surrounded her at Casa Azul (Blue House). Her lifelong home in Coyoacán, it was her refuge and inspiration, as it was for her husband, artist Diego Rivera, to whom she was married 24 years.

The garden, which was filled with native plants, housed Kahlo and Rivera’s collection of pre-Hispanic artifacts and folk art displayed on a four-tiered pyramid inspired by the Mesoamerican city of Teotihuacan.

Not only does the exhibit showcase the ways Kahlo’s courtyard garden inspired her work but also the diversity of plant life in Mexico as well as the country’s rich cultural and political history that inspired many of its great artists and defined art in the years following the Mexican Revolution (1910-1920).

What’s important to note is that Kahlo during her lifetime was as well known for her husband’s career and the traumatic events she experienced, namely debilitating injuries she incurred in a bus accident when she was 18 that left her with lifelong pain and medical issues.

This exhibition approaches Kahlo from a different angle, to broaden the discussion of the artist.

This exhibition is made possible by NEH on the Road, a special initiative of the National Endowment for the Humanities. The exhibit is adapted from the exhibition, “Friday Kahlo: Art, Garden, Life,” at The New York Botanical Garden, and adapted and toured for NEH on the Road by the Mid-America Arts Alliance.

Kahlo was born in Casa Azul (she also died there). As a child, she gathered plant specimens from parks and natural sites in her hometown. As an adult, she collected cultural objects, including hundreds of devotional paintings and thousands of photographs, as well as an array of plant-based objects from botanical field guides and scientific publications about Mexico to poetry books, jewelry, traditional Mexican dress and other objects.

She also collected living plants, filling the courtyard garden at Casa Azul — now the Frida Kahlo Museum. A reproduction of her diary on display, which features sketches of Mexican culture, plants and self-portraits, serves as a study for the art she created.

Included in the exhibit, which snakes along a garden-like path covering the entire first floor of the museum, is information about native Mexican plants that were grown in her garden and their cultural significance.

The multi-media exhibit also includes a series of flipbooks showing the timeline of her life, a video presentation, and a station to sit and create a nature-inspired drawing or play a game.

Kahlo studied positivism, an approach grounded in natural sciences, and she had knowledge of medicinal and culinary properties of plants, fruits and vegetables.

Several reproductions of her paintings, which convey cultural, spiritual and intimate messages as well as her reverence for nature and nationalistic fashion sense, are also part of this show. She literally wore the natural world — the flowers she grew she would incorporate into her signature braided updo.

At times, the natural world was intertwined with human life in her work: she would create half-plant, half-human hybrid characters, as she did with her piece, “Portrait of Luther Burbank.” The painting, which she created in 1931, depicts a California botanist who developed more than 800 new strains and varieties of plants, including more than 60 varieties of spineless cacti. In the portrait, Burbank is holding philodendrons, his feet replaced with roots embedded deep in the visible ground below.

This hybridism is also a commentary on the blending of European and indigenous cultures in Mexico that created a new national identity; and a nod to Kahlo’s own heritage; her father was of German descent and her mother, Mestiza, of indigenous and Spanish descent.

Other cultural artifacts on display in the exhibit include a dress from the Mexican state of Oaxaca where Kahlo sourced much of her attire, and examples of folk art collected by Kahlo and Rivera as well as photographs of the artists in her home and garden.

Additionally, visitors will learn about Mexican culture, including traditional food and drink, festivities and agricultural practices. The exhibit is augmented by artifacts from the Mariposa Museum’s permanent collection.

“Frida Kahlo’s Garden” is on display through Oct. 20 at Mariposa Museum, 26 Main St., Peterborough. Masks and use of (provided) hand sanitizer are required for admission. Parents should note that while Frida Kahlo’s Garden is enjoyable for all ages, the Mariposa’s usual hands-on activities for children, such as the musical instruments to play, puppets and Inventing Room craft activities are temporarily closed. Hours are Wednesday through Sunday, 11 a.m. to 5 p.m. For more information, call (603) 924-4555 or visit mariposamuseum.org.