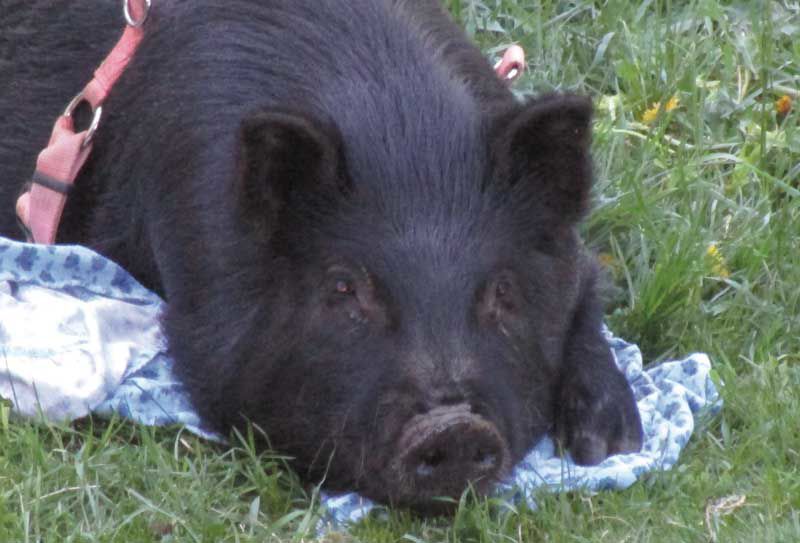 Blackberry was hand-raised by Hannah at Phoenix Farm. 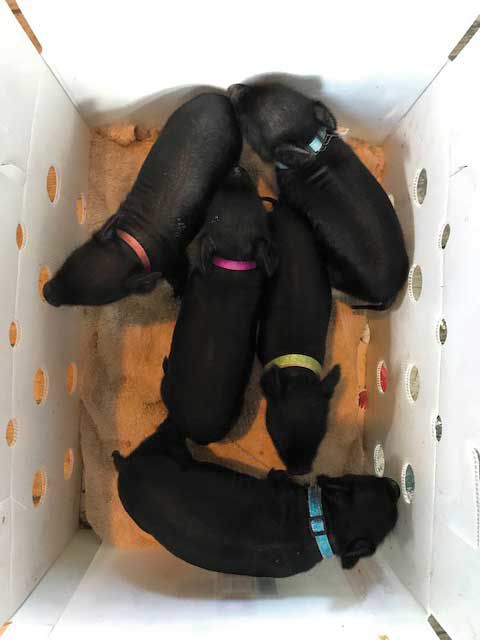 At Phoenix Farm in Marlborough, Buster the boar has been known to play host to the chickens and guinea fowl that live on the farm with him. When they join him in his pen, he is happy to have the company.

Unlike a commercial boar that can weigh up to 1,200 pounds, Buster is a heritage breed American Guinea hog who in comparison is only about 250 pounds. His friendly personality and smaller size are two of the traits that define this special breed.

“Their size and friendliness, especially if you spend time with them when they are young, are two of the advantages of the Guinea hog,” said Kate Kerman, a partner at Phoenix Farm where she lives with her husband and two daughters. “They are easy to handle, as they are not afraid of people. They are also a lard pig, so there is a little more fat in their meat, which means they are very tasty.”

The Kermans have been on the farm since purchasing it in 1996, but it wasn’t until 2011 that they decided to try earning some money from the farm. Starting with the sheep that came with them to Phoenix Farm, the Kermans have since added chickens, ducks, geese, Guinea hens and in 2010, Guinea hogs.

“Our daughter Hannah decided we should have pigs, and a friend of ours had a pair of pigs from the Small and Beginner Farmers of New Hampshire and he wanted them to go to someone he knew. When he suggested the American Guinea hog, Hannah went online to investigate,” Kerman recalled.

“The American Guinea hog has a very pleasant disposition and is not prone to disease. They are also good foragers, so they are out on pasture for part of the year,” Kerman said. “In the winter, we bring the animals into a small collection of buildings, but even in the winter they don’t need a lot of grain.

“Buster eats about three pounds of grain a day and produce that we bring home from the [Monadnock] Food Co-op. We really love this breed and have been successful in raising them.”

Buster and company are not the only heritage breeds on the farm. The pigs are joined by American Buff geese and Magpie ducks, in addition to both sheep and laying hens that are not heritage breeds. Of top importance at Phoenix Farm is not so much the breed, but the care and manner in which all the animals live.

That includes not using antibiotics except when necessary in case of illness, and feeding the poultry non-GMO — which stands for genetically modified organism — grain.

“There have been maybe just three or four times in the last nine years when we have used penicillin for the animals when they are sick,” Kerman said. “I’m a bit suspicious about GMO and it isn’t clear what the long-term impact will be. Studies have shown that pasture-raised animals are better for humans to eat. Plus, there is the sense of wanting the animals to feel happy and live a natural life.”

And the animals at Phoenix Farm certainly have a happy life. On numerous occasions, piglets have been raised indoors. Wanting to expand their gene pool, a piglet named Blackberry was acquired and then hand-raised by Hannah who bottle fed and litter box trained her.

It was when Blackberry learned how to open up the fridge and presumably help herself that she got her eviction notice and made the move to the barn.  Another time, when a sow was lost in childbirth, all six piglets were brought indoors and the entire family worked to nurture them, feeding them every three to four hours at first.

“Pigs in the market are frequently raised in less than ideal conditions. Not that long ago, people raised large quantities of commercial pork using antibiotics as a preventative measure. That delivered antibiotics to people,” Kerman said.

Unlike large-scale pork operations, there are usually just one or two boars and two or three sows at any one time at Phoenix Farm.

Also unique to the New England small-farm tradition, the Kermans welcome visitors, with prior arrangement, to come and visit. Kerman also said that is has been “great getting teenage energy” from the interns who come to work and learn with them.

During the summer, Phoenix Farm products are sold at local farmers’ markets, although which market for 2020 is still being determined. Online ordering is available on their website, and delivery is often possible within an approximate 15-mile radius.

Phoenix Farm can also be found at annual popular community events like the Stonewall Farm Fare, the Monadnock Farm Tour and their own yearly barbecue which is traditionally the last Saturday in August.

Visit phoenixfarm.org or facebook.com/PhoenixFarm.NH to learn more about the farm or where and how to purchase locally raised meat or eggs.