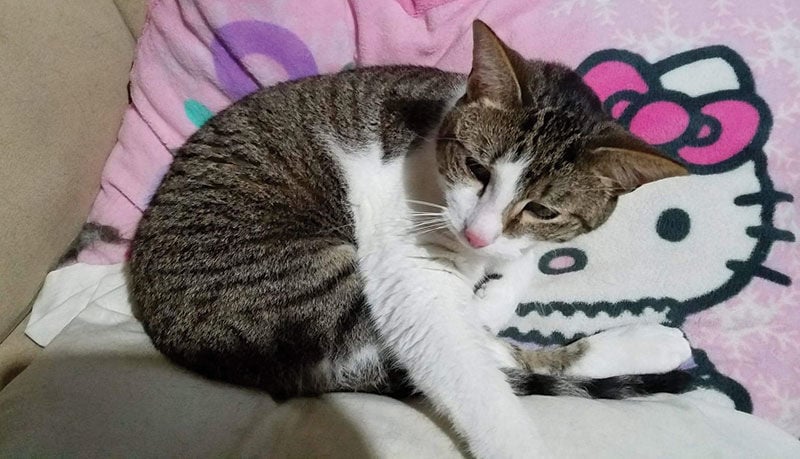 Risky, the Chesney family cat from Rindge that climbed the tree and was rescued by Trevor Laperle. 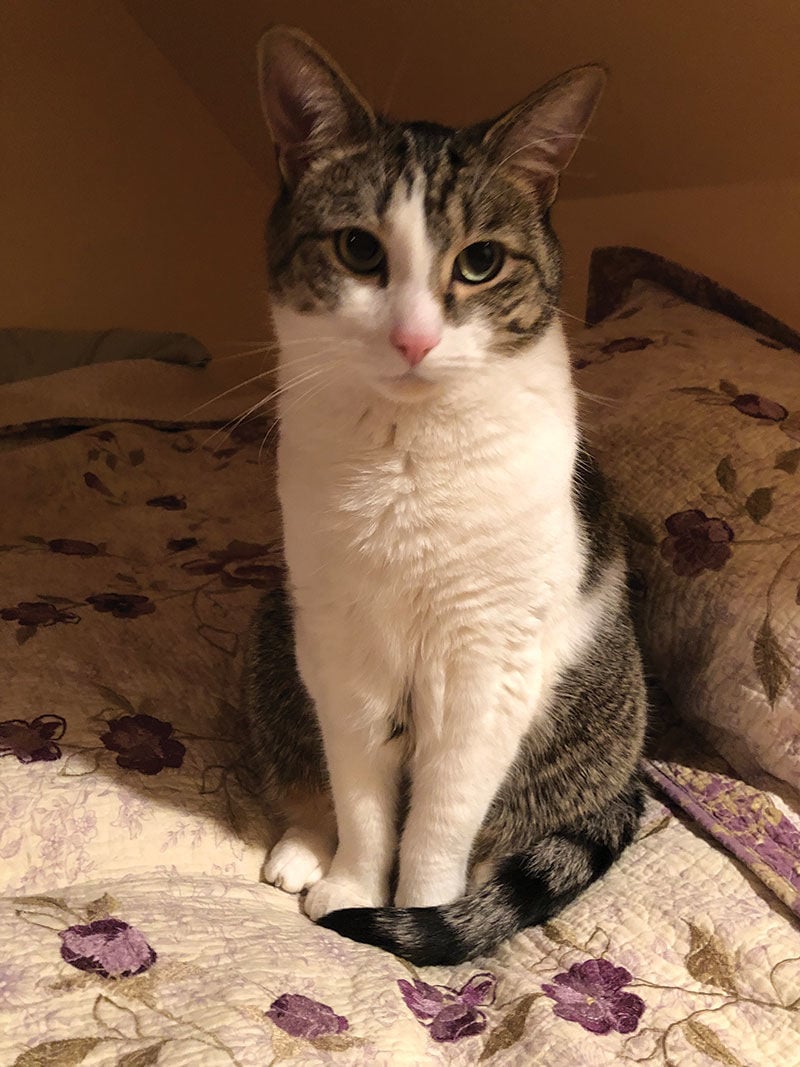 Wendy Chesney, of Rindge, knows her grey-and-white tabby cat, Risky, is an escape artist - he had gotten out of the house three times since they brought him home in 2016. All those times, he climbed a tree and had to be rescued by either the town’s animal control officer or the fire department.

But last November it was different. This time, Risky, now 6, climbed a tree behind the Chesneys’ home that bends toward Pearly Pond, making rescue very difficult. By day five of his being stuck in the tree, he was hungry, tired and weak.

While the town wouldn’t rescue Risky due to safety and accessibility issues, they did contact Laperle’s Tree Service in Winchendon, Mass. Chesney was at the end of her rope.

“I could see him in the tree from the house,” said Chesney of her cat, which was a birthday present for her daughter, Katelyn. “I could hear him crying - it was awful.”

Trevor Laperle, the owner of Laperle’s Tree Service, arrived at Chesney’s home within two hours after he got the call. He knew the temperatures were dropping and the winds were going to pick up soon.

“He was getting dinner on the table for his family waiting for his wife to get home,” said Chesney of Laperle. “He decided not to eat and rescue the cat before it got really dark.”

Laperle, wrapped in chains with spikes on his shoes, climbed the tree in 10 minutes and lured Risky to him with treats. When the cat approached, Laperle grabbed him and held on, descending via a rope anchored at the bottom by a friend he’d brought along to help with the rescue.

“It was the best gift ever,” said Chesney, who called Laperle “a genuine hero.”

She believes Risky survived for five days by getting hydration from the leaves in the tree.

Chesney has a six-foot-tall fence behind her home that Risky has managed to scale after escaping the house through the dog door.

“He’s like Houdini,” she said, adding that the dog door now remains shut at all times.

When he joined the family, Chesney said he was rambunctious, often jumping on things including her daughter’s shoulder.

“He lives up to his name,” she said, a name her daughter gave him.

Chesney feels the public needs an education on how to prevent your pet from climbing a tree, and what to do if your cat does get stuck.

Cats climb trees to keep safe, hunt for prey, and just for fun.

Chesney’s veterinarian at Fieldstone Animal Hospital in Rindge told her the idea that a cat that climbs a tree will eventually come down is a misconception. Instead, many suffer and some even die.

Cats’ sharp claws make them capable climbers. For most of them, though, climbing up is a lot easier than climbing down.

The first line of defense is discouraging your cat from climbing trees in the first place.

Keep your cat indoors and provide him or her with climbing activities indoors, such as a window perch or a carpeted climbing tree.

Even with all kinds of stimulation, there is still a chance your cat will want to get out of the house.

You can install some climbing deterrents on your cat’s favorite trees by either wrapping aluminum foil or chicken wire around the tree from the ground to a few feet up the tree.

If your cat does climb a tree and gets stuck, it’s very important to remain calm - there is a chance he or she will climb down on their own.

It’s not a good idea to attempt the rescue yourself unless your cat is not too high up in the tree. If your cat is closer to the ground, you can set up a long wooden board on an angle to help your cat get down safely on its own.

If your cat truly is stuck, try to lure it down with food or treats, allowing time for spotting and smelling it.

If none of the above options are working, then it really is time to call for help before your cat becomes dangerously hungry and weak. Animal rescue organizations like the Monadnock Humane Society should be able to help or advise on the best course of action.

Rescuing pets from trees isn’t a signficant part of Laperle’s Tree Service’s business, which is why Chesney wanted to recognize Trevor Laperle for his kindness.

“He has a heart for animals a lot of people don’t,” she said.

While he didn’t charge for his services, Chesney felt compelled to make a donation.