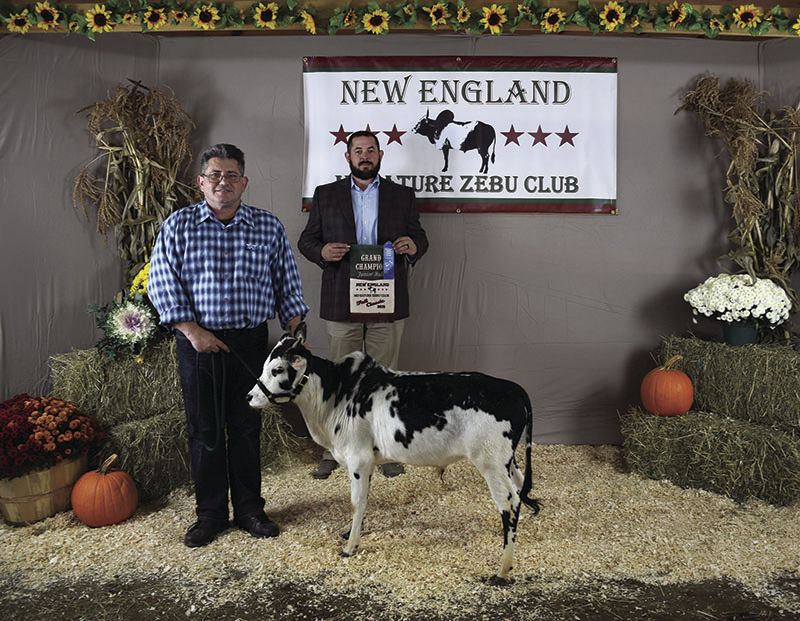 When Frank or Elizabeth de Bem are up at 3 a.m. preparing to hit the road with their miniature horses or German shepherds, they sometimes ask themselves why they ever thought breeding, training and preparing these animals for national competition was a good idea. But inevitably, when one of their dogs or horses has placed in the top 10 among competitors from all over the world, or even earned a Grand Victor, they get back in the car revitalized and eager to come back the next year, despite the hot, long days and the incredible amount of work,.

“When we have a champion, people ask, ‘do you make any money?’ and we don’t,” said Frank. “It is the gratification that acknowledges years of hard work. We are not doing this to get glory, but to say, ‘wow, we’ve got something special that someone else has acknowledged.’ “

From their base in Hancock, the de Bems own Clear Brook Farm. While their property is home to many animals, their focus is on breeding and raising miniature horses, German shepherds and zebus, which can best be likened to a miniature cow.

“The zebus are cattle but because they are smaller there is less impact on the field. They also eat brush, like goats,” Frank said. “We have only had our zebus for seven years, but we have the biggest herd in New England.

“This was our first year showing them, but I think they will grow in popularity as more people, like 4-H kids, see them as they are able to be handled by children.”

The miniature horses at Clear Brook Farm are of the Shetland breed, and are Elizabeth’s focus. Often the name Shetland invokes an image of a chubby, shaggy little pony, but Clear Brook Farm’s Shetlands more closely resemble an Arabian horse.

“When I first had the farm, I did hunter/jumper [shows] and I had a couple of miniatures as pets and for fun I started showing them. Then I went out and bought a couple more minis. I found that I enjoyed the miniature horses and could make the same money with the miniatures as I could with the big ones so I went from there,” Elizabeth said.

For Frank, who has been showing his dogs since the 1980s, he sees the German shepherds as incredibly versatile, intelligent and able to make either a great pet, therapy dog or security animal. Elizabeth also noted that Frank’s German shepherds are known through the Northeast and beyond as being the best-tempered dogs around.

A litter of puppies or new foals in the barn means Frank and Elizabeth first assess their new additions and select any that show an inclination to competition. Frank looks at each puppy and makes an early assessment on which dogs will be great for showing, as a therapy animal, working as a police or military dog or in a home with a family as a beloved pet.

He takes great pride in the fact that dogs from the farm have gone on to be their best selves wherever that may be.

“One of the dogs I had was part of a big drug bust, and that made me feel good,” Frank said. “I like seeing people happy and seeing families happy when they send pictures. It is very rewarding.”

For those horses and dogs that show potential, both Frank and Elizabeth start to consider training. Elizabeth’s top horse prospects work with a trainer while she herself works with some of the others and then sells to those who are interested in showing, but not quite as competitively.

The horses are shown through their “senior” year at age three when they retire from their career in the ring back to Clear Brook Farm.

The German shepherds are trained either by Frank or by a friend who is a handler and are then shown by either Frank or the handler. Getting a dog ready for the ring can be a lot of work, or not as much, really just depending on the dog.

According to Frank, “Some dogs have a natural fluid gate and some it’s hard work to help them learn gait speed for the ring. We practice until it becomes second nature and practice setting up, so they know how to stand for the judge. They have to get used to people going over them and we practice at home until they are comfortable when we get to the show.”

Likewise with the horses, some animals take more work than others and some naturally have the correct show form right away. Among the many aspects of their care and training, Elizabeth looks hard at the food the horses eat.

“The food is important,” she said. “Show horses get quite a bit of food. They eat a lot of grain. We want a lean body with a crease in the back, so a lot goes into feeding.”

While it may seem intense to prepare for a national championship, Frank perhaps summed up what showing really means, at all levels of competition.

“I think for people that love their pet, by taking it to a show it’s like taking your kids to sports,” he said. “It is another activity you can do with your pet. If you keep an open mind you can go and have fun. Plus, the animals really like the attention.”

To learn more about the miniature horses, German shepherds or zebus at Clear Brook Farm, visit clearbrookminis.com, or for specific information about German shepherds, visit kysarahgsd.com.