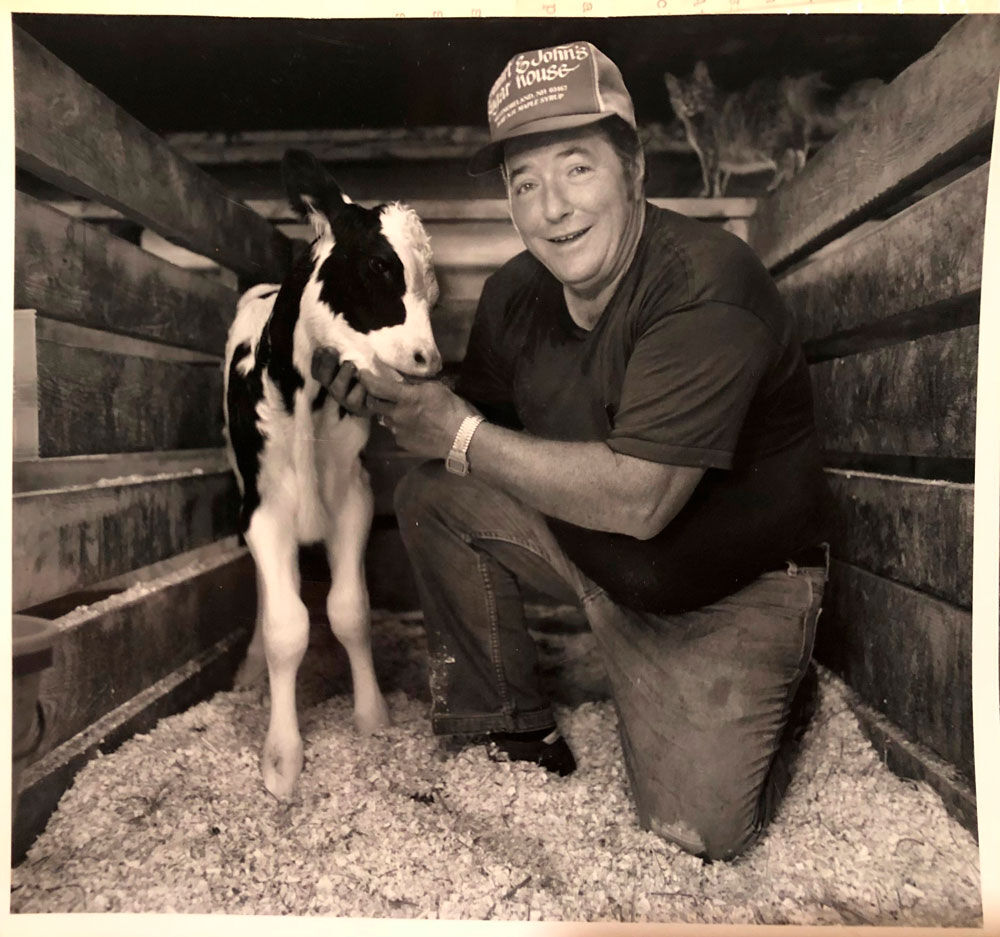 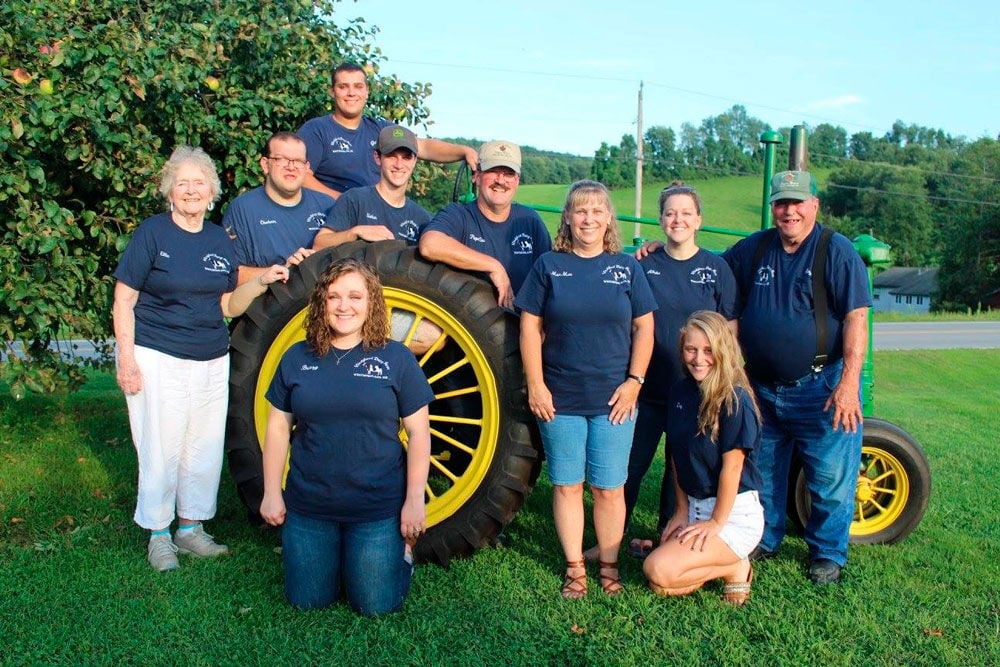 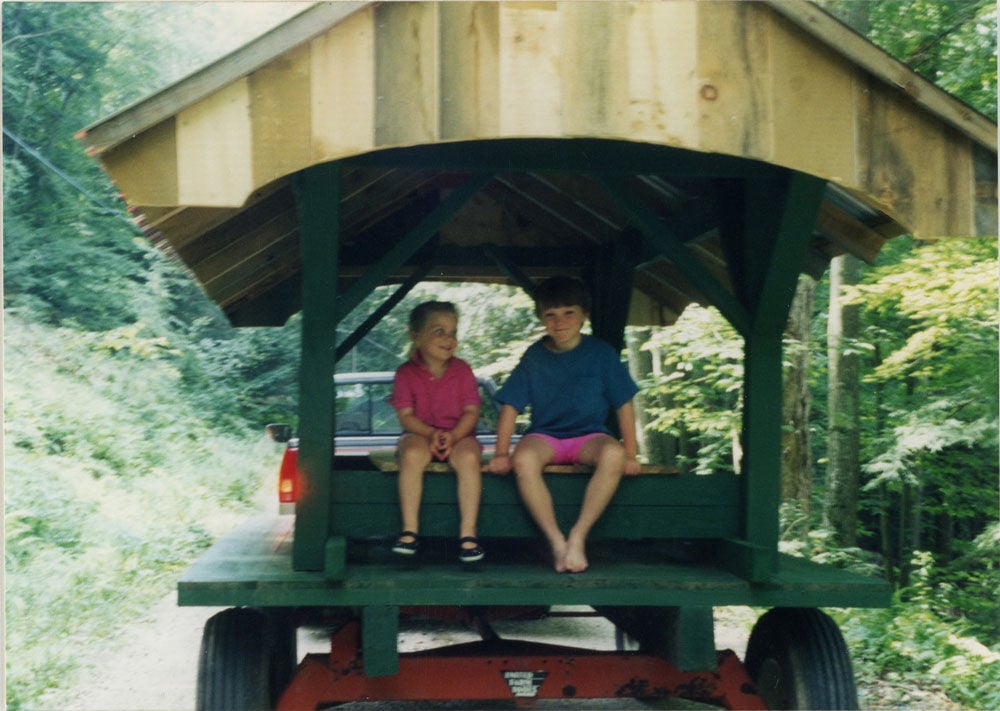 Jarrell is now the second generation of her family to help operate Green Wagon Farm. 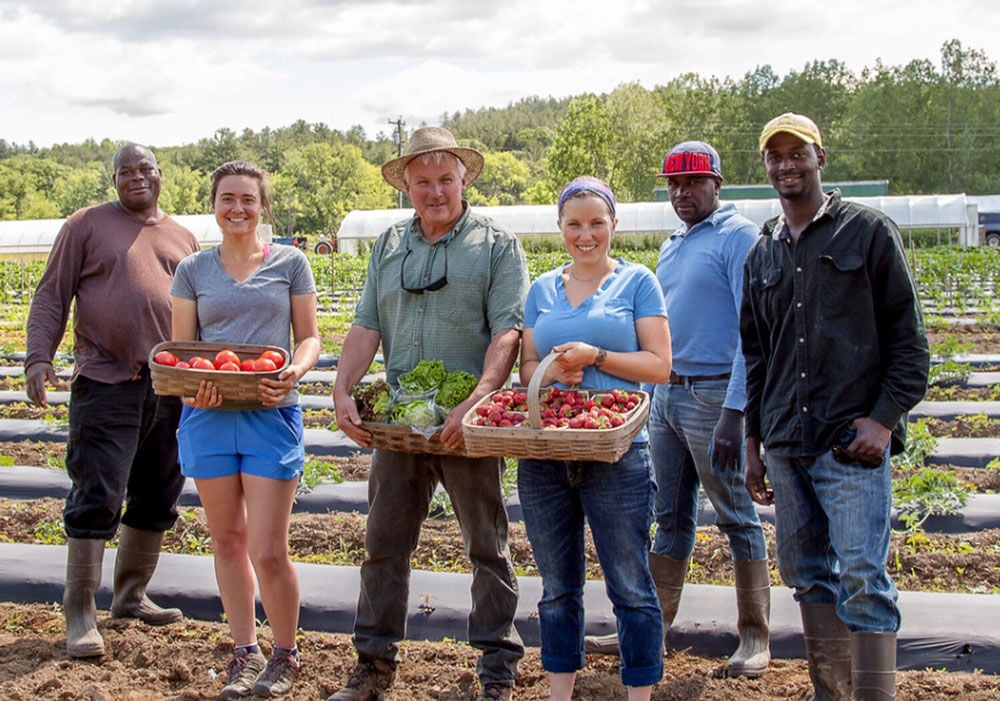 Like crops planted firmly in the ground that grow roots that sprout, farming is embedded in the DNA of many families in the Monadnock Region.

For some of those families, the roots reach back two, three, four generations and beyond.

In the overall picture of New Hampshire family-run farms, Green Wagon Farm in Keene is young. Founded in 1994, the vegetable, fruit and flower farm is operated by Bill Jarrell and his daughter, Kaisa, and about a half-dozen staff. The farmland is split into two different locations — Court Street in Keene as well as fields and greenhouses in Surry.

Kaisa Jarrell has been around agriculture all her life. Her mother, Julie Barrett, ran an orchard and grew pumpkins at Maple Lane Farm in Keene until a few years ago; her uncle operates a greenhouse, and her family ran a local dairy farm.

While it runs in her blood and she has always enjoyed farming, she didn’t think she would pursue it as a career. She studied graphic design at college and worked as a wedding photographer in North Carolina, a job she continued when she returned to New Hampshire in 2013 to help her father at the farm.

“Peak wedding season is peak farm season,” she said. “I had to choose; I love growing food so much more.”

Kaisa Jarrell took on the role of farmstand manager, and with her flair for design and flower arranging, she transformed and expanded the stand — which started with a little green wagon — into the inviting gem it is today.

“I worked on how we display things to create a cohesive brand,” she said. She designed the farm’s logo that is emblazoned on products including shopping bags and began using wooden boxes, baskets and mason jars to hold produce as well as her bouquets of cut and dried flowers. Strings of bistro lights and a chalkboard featuring the day’s harvest complete the picture.

While many staff have been working at the farm for many years, there is also a lot of seasonal part-time help. For more than a decade, the farm has participated in the H-2A program, a visa program that allows for foreign workers to do seasonal agricultural work. The H-2A crew members come from Jamaica and work and live at the farm in-season.

“We’ve tried to replicate that inclusive culture at our farm, in how we treat our customers, how we work as a team,” Kaisa Jarrell said. “It’s really important; it’s how you get people to stay.”

She has taken on more responsibilities, including doing all of the plant seeding (her father does the grafting of greenhouse tomatoes).

“Apart from what’s done by tractor [which her father does], the seed scheduling and transplanting is all me at this point,” she said. “I run the calendar.”

In addition to strong family bonds and reliable and loyal staff, the farm’s success comes from continuing to learn and improve farming practices.

While not certified organic, Kaisa Jarrell said Green Wagon Farm is extremely organically inclined. They use 100 percent non-GMO seeds; plant cover crops to replenish nutrients in the fields; use leaf compost from the city of Keene; employ integrated pest management (using a variety of methods to reduce weeds, insect pests and fungus), and techniques to promote soil health and prevent soil erosion and disease with spraying done on a limited, as-needed basis.

“We go to conferences and read studies to keep up to date,” Kaisa Jarrell said. “Things are always changing.”

In the case of the Jarrells’ family farm, shared interest is key.

“When you love what you do it doesn’t really feel like work,” she said. “Even though farming can be incredibly frustrating and hard, we both really love it.”

On the other end of the spectrum of multi-generational farms is Windyhurst Farm in Westmoreland, now run by the fourth generation of the Adams family.

The farmhouse that sits on the now 66-acre dairy farm was built in 1778, according to Alisha Adams, a member of the fourth generation of the family that operates it. Her great-grandmother, Lois (Adams) Leach inherited the farm after her husband’s death. She had been a widow with three young sons when she met Lawrence Leach: one of those sons was Alisha’s grandfather, Roger.

“His two brothers didn’t have any interest in running the farm, but my grandfather did,” she said.

Roger Adams and his mother operated the farm for about 10 years before he married Alisha’s grandmother, Eleanor. The couple purchased the farm from Roger’s mother, Lois.

They had three children, one of whom is Stuart, Alisha’s father. As a teen, Stuart and his best friend, John Matthews (who later worked at the dairy farm), built the farm’s first sugarhouse in 1974 and bought their own oil-fired evaporator to start a sugaring operation — Adams was in 8th grade and Matthews was a sophomore in high school. The pair began with 920 taps and made 230 gallons of pure New Hampshire maple syrup that first season. Today, Stuart and John’s Sugar House works with 10,000 taps and produces 2,500 gallons of syrup each year.

Stuart’s parents, Roger and Eleanor (Ellie), opened the restaurant in 1975 and ran it for many years along with his two sisters, Hope and Paula, who worked as servers. They served pancakes, handmade donuts and sugar-on-snow on paper plates. Back then, the pancake house was a way to promote the syrup. The restaurant was only open on weekends in spring and fall when tourism is at a peak.

Anyone who’s taken a scenic drive along Route 12 North knows Stuart & John’s Sugar House Restaurant, the bright red building at the center of a stunning bucolic landscape with the farm in the background at the junction of Route 63 in Westmoreland. Eleanor Adams ran the sugarhouse for many years and enjoyed being at the restaurant.

“She was always flipping pancakes and greeting people or sitting at someone’s table talking to them,” Alisha said. “She was a social butterfly — still is.”

Today, Stuart Adams and his wife, Robyne (Alisha’s stepmother), run the restaurant. When the dairy industry was struggling in the early 1990s, they decided they needed to do more at the restaurant. So, they started serving ice cream from Blake’s in Manchester and Robyne made her own fudge sauce.

They also developed and began serving the following year what is now the restaurant’s menu, which includes full breakfast and dinner. They soon got rid of paper plates and bought real dishware to serve meals in the rustic open-concept dining room that seats 93. Customers can even stand and watch the cooks prepare their food in the “open pancake kitchen.”

Alisha and her brother, Chad, are the fourth generation along with Robyne and Stuart’s four children. Chad, who also works at the sugarhouse, is sous chef who does prep and cooks omelets behind the line; and their daughter, Franchesca, had also worked there as a server. Another daughter, Sabrina, had worked at the sugarhouse. Robyne is one of the restaurant’s managers, and she also cooks. Her other two sons work at the dairy farm and plan to take it over as her husband did from his father.

The family ships milk to the Hood plant in Concord, where it’s bottled for sale; they also sell their own beef and of course, maple syrup (mostly shipped). The Adamses grow corn and hay on the Swanzey property to feed their dairy herd at the main farm (the dairy barn at the main farm is across the road).

Alisha, who now works in healthcare, lived away from the family farm for many years, although she said she’s always been involved remotely. She describes her role as doing “all kinds of miscellaneous tasks” such as helping with sugaring and doing paperwork including grant and proposal writing.

The farm, now protected by conservation easement, will be inherited by the fifth generation: Alisha and her husband’s two children (now 2 and 4). She and her husband, Kevin Powell, purchased the house next door to her grandparents on the “family compound.” Her two sisters, Sabrina and Franchesca, who had also worked at the sugarhouse, plan to return to the family farm; her brother, Garrett, works full-time on the farm, while her youngest brother, Nathan, does also and now with a degree in dairy management.

“He’s interested in management of the herd and cow nutrition,” she said of Nathan.

Alisha credits her parents for instilling a work ethic in the family.

“As a physician’s assistant, I’ve worked in big hospitals, and I’ve seen world-renowned surgeons who don’t work half as hard as my dad,” she said. “We see his dedication day in and day out.”

The family eats meals together three or four times a week. “We gather around the table, talk about new ideas and plan,” she said.

The last five years have been the hardest in the farm’s history, according to Alisha, namely due to the pricing of milk, which hasn’t changed, while the cost of doing business in the dairy industry has increased.

“It’s a tough climate for farming,” she said. “But we’re committed to being here. Our history here in the region is very important to us.”