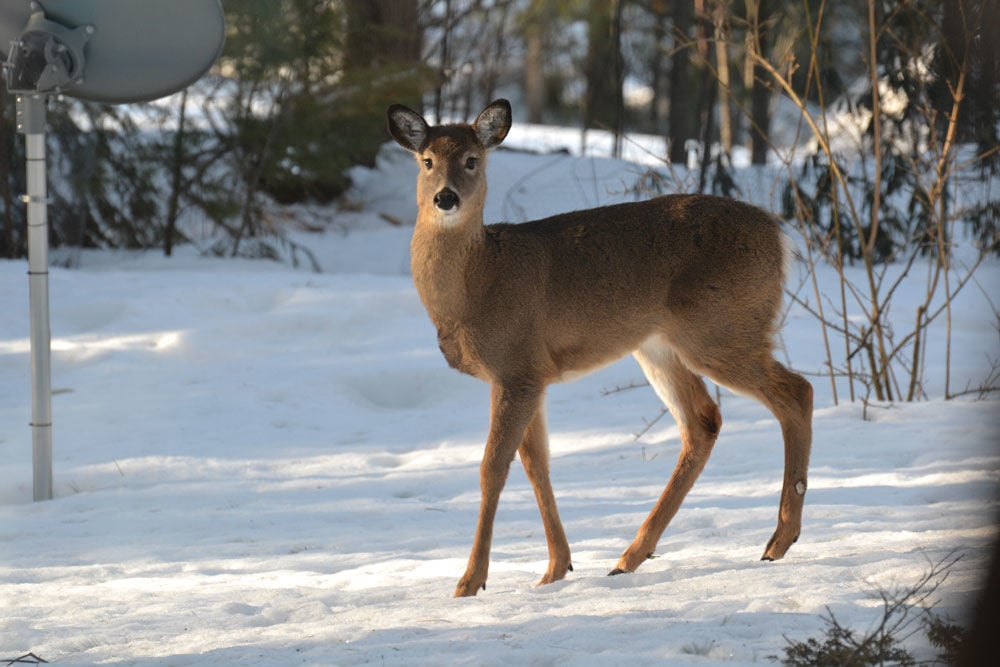 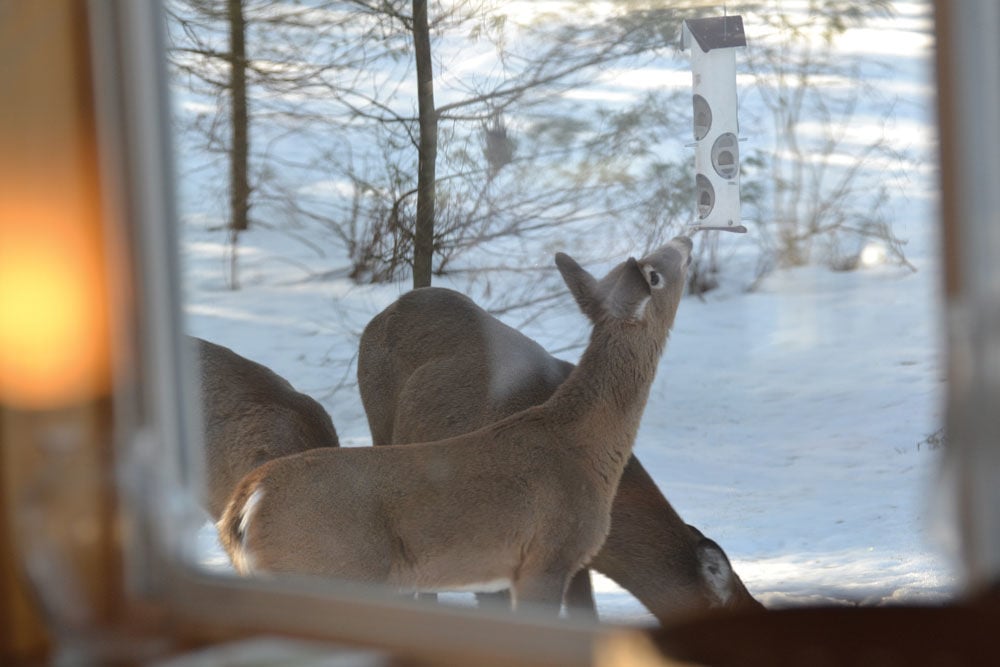 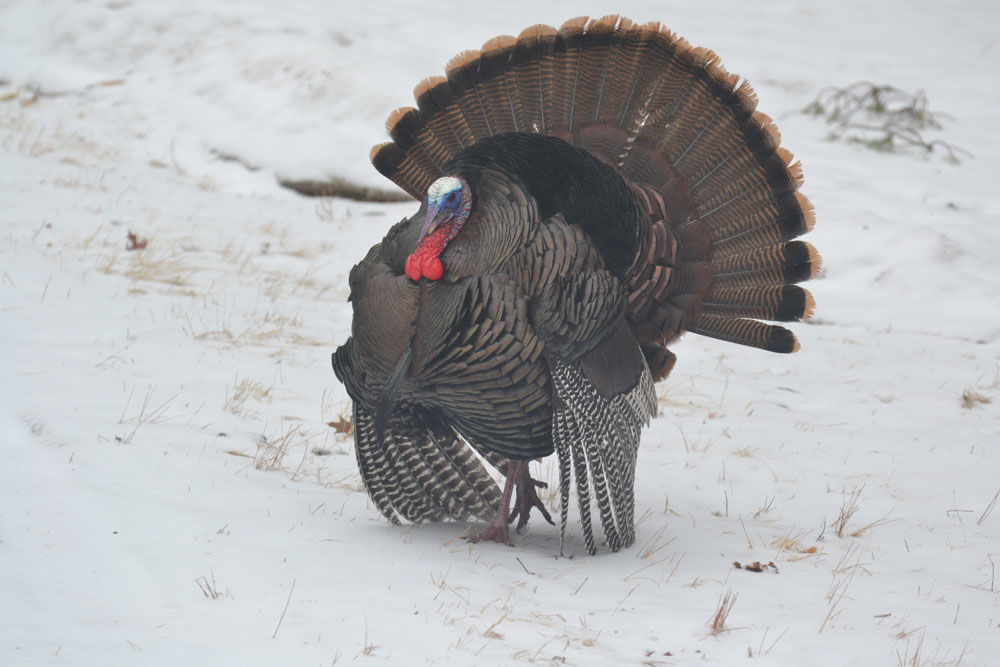 One evening last summer, I noticed fireflies blinking away in the dark outside the window beside my easy chair.

“Look at the lightning bugs out there,” I said to my wife, Marsha.

But when she came to the window, they had stopped blinking.

That someone was a passing deer that turned its head toward the sound of our voices, so its eyes caught the light from inside the house. It was so close that it was blocking the view of the fireflies. Deer in the yard are not uncommon here at the Poor house.

This spring, my rhododendrons disappeared – again. But they’re not completely gone. The 10-foot high shrubs still have a two-foot crown of foliage the deer couldn’t reach. This happens almost every winter when I get lazy about applying the spray-on deer repellant. Deer are a bit of a problem here, in part because some of our neighbors enjoy feeding them. I’ve counted as many as 16 at a time in the yard. It makes flower gardening a challenge. Just about the time the hosta leaves get big and beautiful, the plants are reduced to something that resembles celery sticks. The hydrangea is history and the list of other victims is long. I’ve tried a scarecrow and even Irish Spring soap, but to no avail. I refuse to imprison my flowers within an electric fence, so I’ve been reduced to planting only deer-resistant flowers, the ones deer won’t eat – peonies, irises, cone flowers, lambs’ ears, bleeding hearts and the like.

But it’s not just deer. There have been times when I’ve counted more than 30 wild turkeys under the birdfeeders, cleaning up the spillage. Turkeys are frequent visitors. The most recent sighting was a few days ago when a big tom with a long beard was pecking at his reflection on the midnight blue finish of Marsha’s brand-new Subaru.

“Hey, stop that!” she yelled, only to be ignored. She had to run out to the driveway and chase it away. She didn’t yell at the hen turkey that showed up in the yard last summer, though, with 11 fist-sized offspring. Her reaction was more: “Ooh, look at that!”

A lot of people are discovering their birdfeeders are attractive not just to birds, but animals as well. Bears are especially fond of black oil sunflower seeds and winter hungry bobcats are attracted to the squirrels that compete with the birds for the food people put out. Sometimes the wildlife visit involves predation. Last year, Marsha ran out of the house yelling to save the neighborhood cat, which was being attacked by a gray fox that wasn’t much bigger than the cat. That tree-climbing fox had a den full of kits in the yard of the next-door neighbor.

Often, we’re unaware of the wild visitors. It’s hard to ignore the murder of crows that comes to feed from the compost bin; until I set a game camera out there, we didn’t know about the raccoons coming at night. That camera also told us we get an occasional visit from a couple of the coyotes that we hear singing in the night from time to time.

Speaking of night, we have our share of owls as well. Once it was a tiny saw whet owl that perched on the porch. Recently it’s been a very vocal barred owl fond of saying what sounds like, “Who cooks for you? Who cooks for y’all.” Sometimes it does this in the maple tree right outside the bedroom window.

Similar to some of our neighbors, we have an ongoing battle with the flying squirrels that have decided our home is their home. A fair number of mice feel the same way. I’ve had skunks take up residence under the porch in the past, posing a nocturnal hazard. We don’t have a dog, so that occasional porcupine doesn’t pose too big a threat. And the Phoebe nest in the eaves is an annual event.

Opossum can be added to the list of critters that visit us, and who doesn’t have a woodchuck or two? I’ve yet to see an actual moose in the yard, but I took pictures of one in my neighbor’s yard across the street. And while I haven’t seen a bear out there on the lawn, some of my neighbors tell me they have.

The wildlife can be inconvenient at times, but they’re fun to watch – better than TV. It’s part of country living, and when you get right down to it, I’d much rather see a bear in the hood than a bulldozer. But for those folks who want more, or perhaps less, wildlife in the yard, landscaping is part of the solution.

To replicate my flower garden of plants deer don’t like just do a search online of “deer-resistant flowers and shrubs.” And maybe consider giving up feeding the birds – or at least restrict bird-feeding to the winter months to avoid attracting bears. If you’d like to see more wildlife, the New Hampshire state nursery offers a “wildlife package” of bare root seedlings that will grow to make your plot a magnet for critters. That package includes such plants as American hazelnut, native grape, elderberry and beach plum. A “winter survival package” includes crabapple, bayberry, European highbush cranberry and European mountain ash. Go to www.nh.gov/nhnursery for more information and to order.