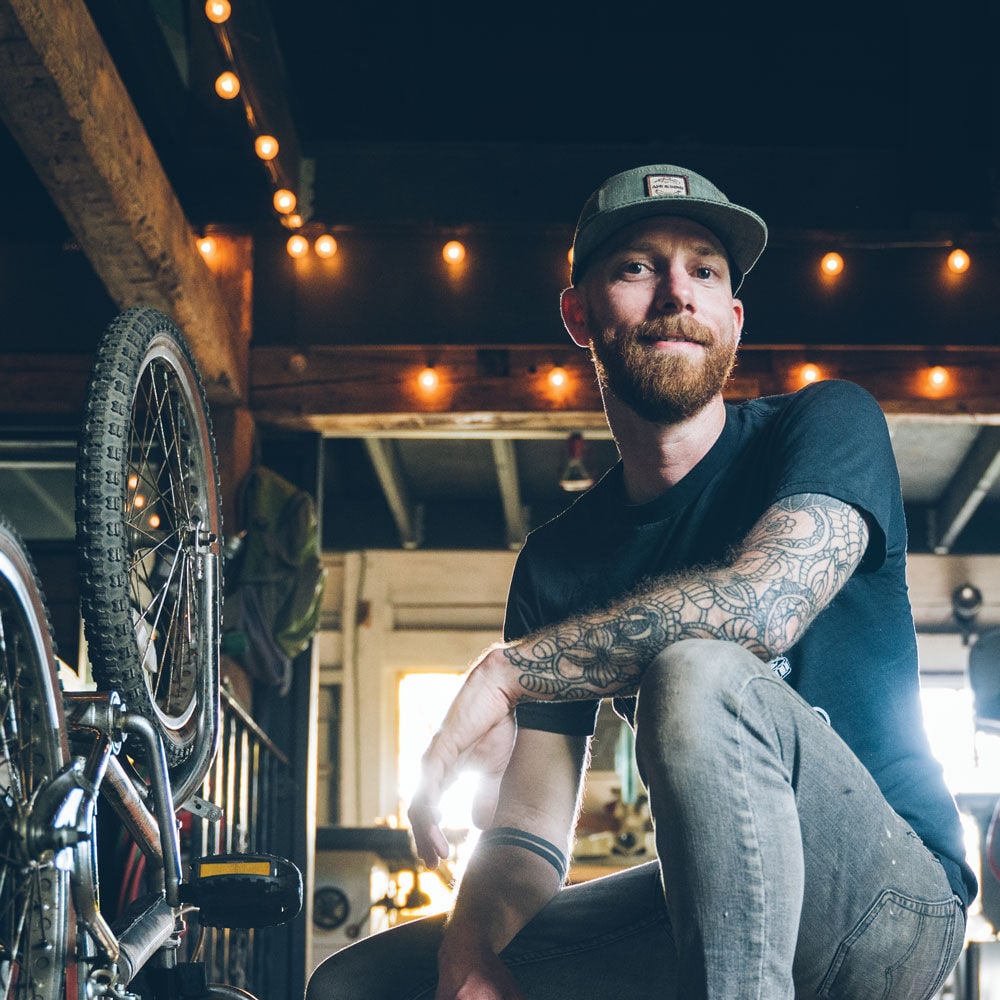 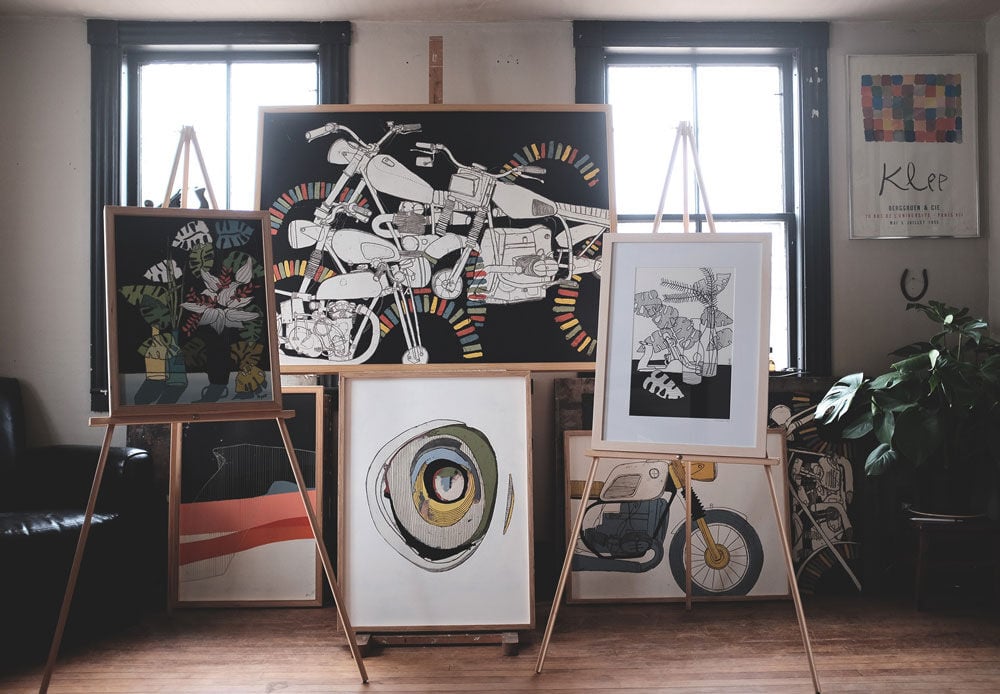 Mix it all together and what have you got? Stuff in Chris Myott’s yard. And, filtered through his palette and talent, contemporary art. “I think artists have a sense of humor and a quick wit,” he said. “I think comedians and artists have a lot in common, kind of a tongue-in-cheek juxtaposition.”

Myott, an artist, furniture-maker, carpenter and jack-of-all-trades from Jaffrey, has no fear of painting potted plants, then whimsically superimposing small wrestling action figures (their arms and legs outstretched in caricature) in the right-hand corners. Two such panels are hung together on 90-degree corners on the studio walls of Myott’s 19th-century home in downtown Jaffrey.

Sure, he grins, they may be harder to sell with Hulk and Stone Cold lurking, but he loves the originality. In the barn are several 32-by-38-inch painted panels of baseball cards, each rotating 180 degrees on hinges adroitly fashioned by Myott — the players’ career statistics duly noted on the back. All that’s missing is a giant stick of stale gum.

“I like doing things that give me a little thrill, especially if there’s a sense of humor to it,” he said.

Fellow artist Paul Tuller of Dublin, who nominated Myott for the Ewing Arts Award, describes Myott’s style as a steampunk vibe but with the elegant simplicity of a Japanese print.

“Although his oil on panel paintings don’t depict the town in a literal way, the objects he paints — vintage tools, baseball cards, motorcycles, plants, old furniture — seem to respect the spirit of his hometown,” Tuller wrote in his nominating letter.

That spirit drew Chris and Becky Myott, high school sweethearts and Conant High graduates, back to the country from the city in 2007. Their romance began when he was a sophomore and she a freshman, and they kissed at a dance.

“From then on, we were inseparable,” he said. “We’ve just been best friends forever.”

They lived in Boston for three years in their 20s, Becky with a foot in the fashion design industry and Chris painting and doing carpentry. He was the quintessential starving artist who preferred living in a country barn over tight quarters in the city. He’d even travel back to Jaffrey to pluck old bikes out of the landfill, restore them and sell them to hipsters in Boston.

“I always had a drive to make things. It’s an itch I’ve always had,” he said.

The pull of the Monadnock region was in his soul, despite a hardscrabble childhood. Myott grew up in a tiny, two-bedroom house with five sisters and one brother. They survived on food stamps and welfare as well as second-hand clothing from the Salvation Army.

His mother, also named Becky, is his hero, well-known around town as the pizza delivery woman with the bright red hair. He calls her a “local celebrity.” She kept the family together, as his father, David, was in and out of prison.

Myott forthrightly describes his childhood hardships — of being labeled the poorest family in town, living in a shack and having a father in jail — saying they helped shape the person he is now. He talks comfortably about his father, having long ago reconciled their circumstances. “The act of going to jail … it makes you a different person,” he said of his dad.

Myott was a born tinkerer, taking bikes apart in elementary school, experimenting with engines on his skateboard in middle school and graduating to his lifelong love of motorcycles, riding and painting them. His aptness for art was recognized by his teachers, who encouraged him to pursue it. Though his grades were average, he was elected president of the Student Council, and played baseball and track in his early high school years. But team sports weren’t really his thing; he’d rather delight his classmates by elegantly writing their names in a “cool” script.

“By then everyone knew [art] was what I was going to do,” he said. “Even in our [yearbook] superlatives, mine was ‘famous artist.’”

He decided to leave Jaffrey and break the family mold in attending Chester College, which closed in 2012. He earned his Master of Fine Arts in studio art. However, if he could do it over again, he would have skipped the formal college setting.

“If I had taken that money and time and gone to Europe and painted in the streets, I would have learned just as much,” he said. “I would have done just fine with that.”

He didn’t like working as an apprentice in Boston, where he lived with Becky and two roommates, so they decided to return to New Hampshire. Becky went back to school, changed careers and is now a nurse in the post-anesthesia care unit at Cheshire Medical Center in Keene. After living briefly in Dublin and Harrisville, 12 years ago their rundown, fixer-upper 1820s dream house came on the market.

“We went into the barn first. I’m elbowing Becky, saying, ‘I don’t even care what the house looks like.’ It was the most magical thing in the world,” he said. “All I wanted was something I could call my own, build into a dream. I started working on the house before I bought it.”

Myott’s artwork has been his main source of income for almost a decade, and he says the past two or three years have been good ones. Last year, they hosted an open house in the barn, complete with a musician, that drew hundreds of artists and buyers.

He’s changed as an artist, drawn more into his childhood idealism, where he paints what’s in front of him, what inspires him — see it, paint it. He works primarily with oil on panel, using a palette knife to apply the paint and drawing through it while it’s wet.

On his website, Myott says he creates abstract compositions derived from the color palettes, shapes and textures around him.

“When you’re younger, you think you have to have a solid answer,” he said. “What’s changed is I’ve figured out who I am as an artist. I’m so obsessed with the process now. I want it to be uniquely mine. I literally feel like I’m living my dream right now. I have the freedom to be myself and make art.”

Myott saunters to his 800 Volvo, turns the key and revels in the throaty roar of the engine. The body is blotchy, the paint having long since faded, but it’s a functional, around-town car. And it’s art.