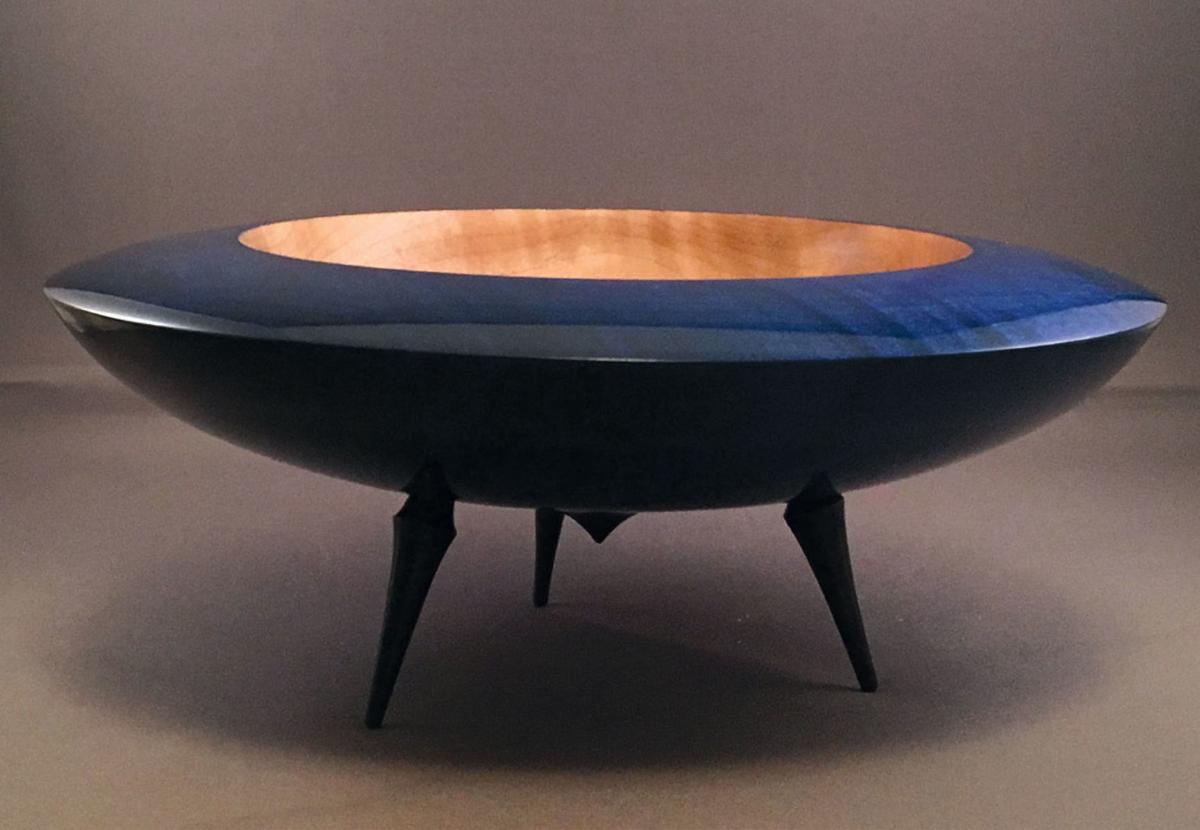 A footed maple bowl, dyed blue on the outside with ebony legs, was turned by Charlie Sheaff 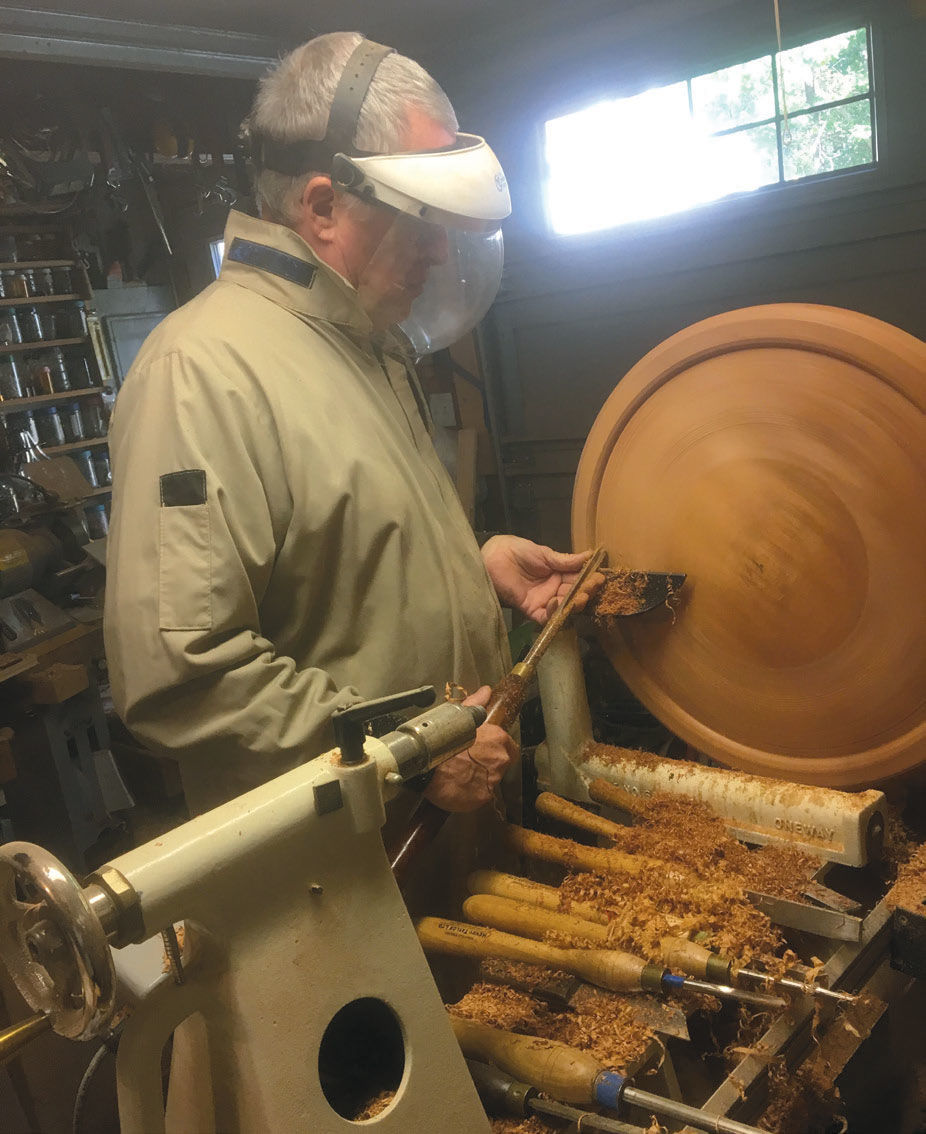 Charlie Sheaff turns a large platter at the lathe 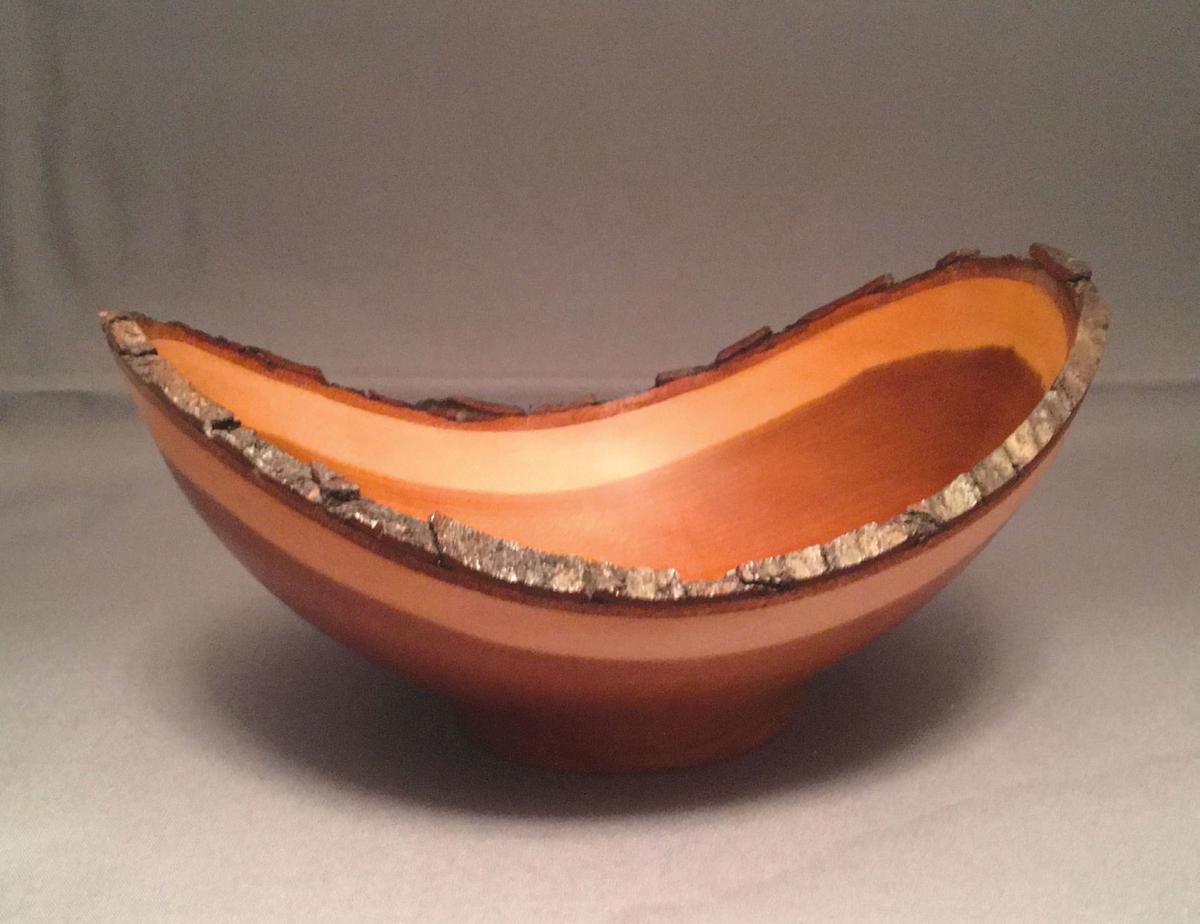 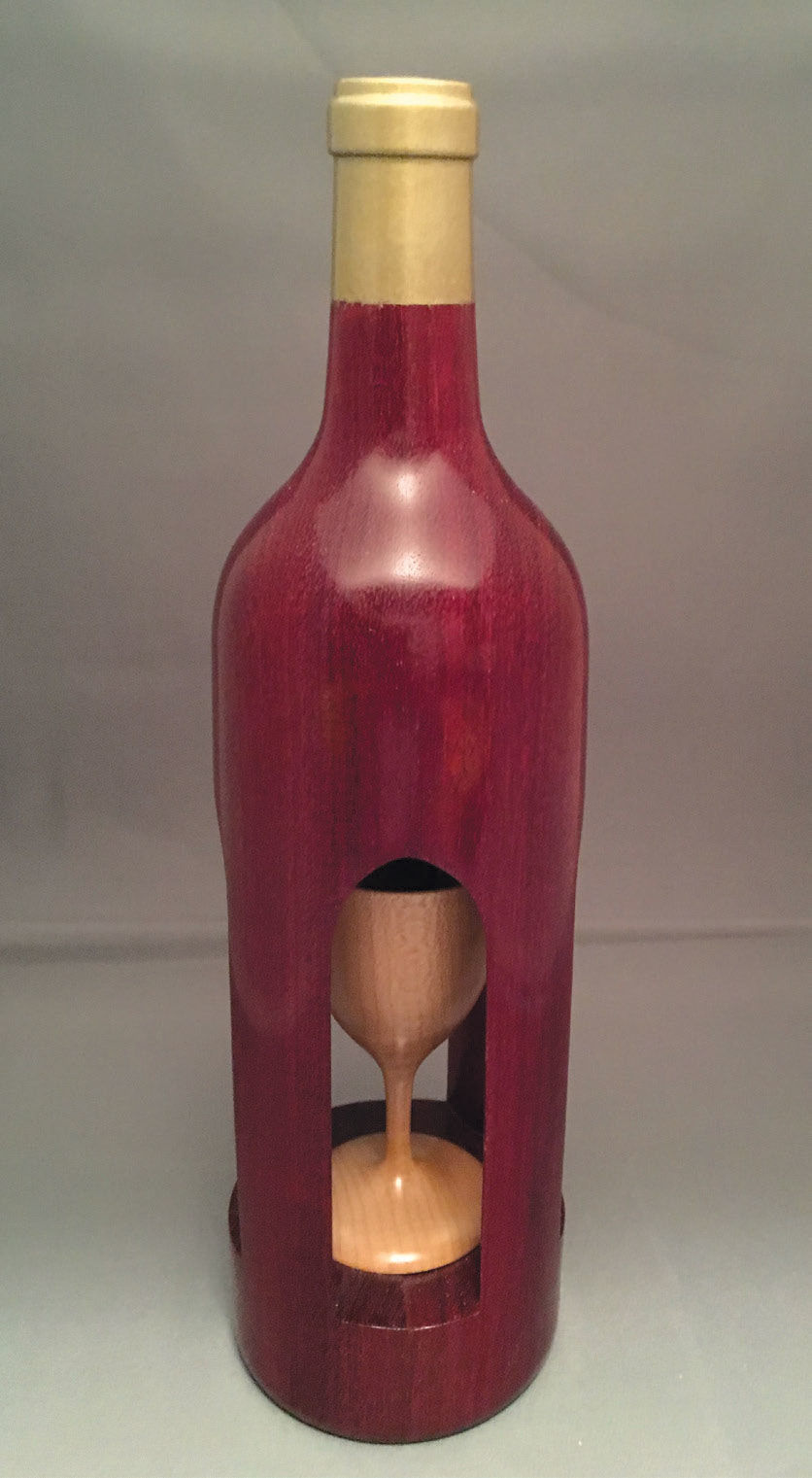 A Purpleheart wine bottle with maple wine glass on the inside is an example of inside-out turning. 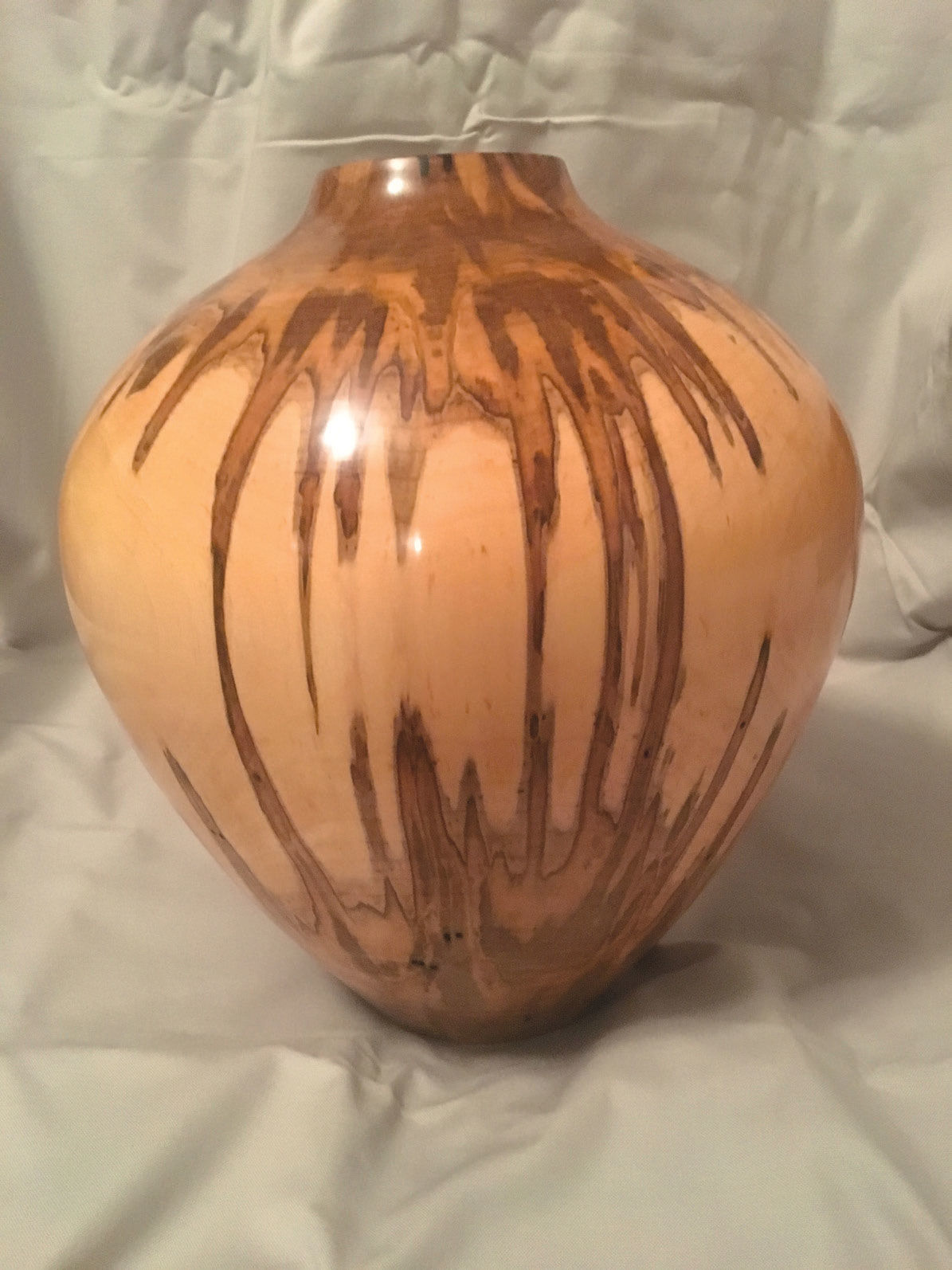 The coloration of this ambrosia maple vase is caused by staining of the ambrosia beetle. 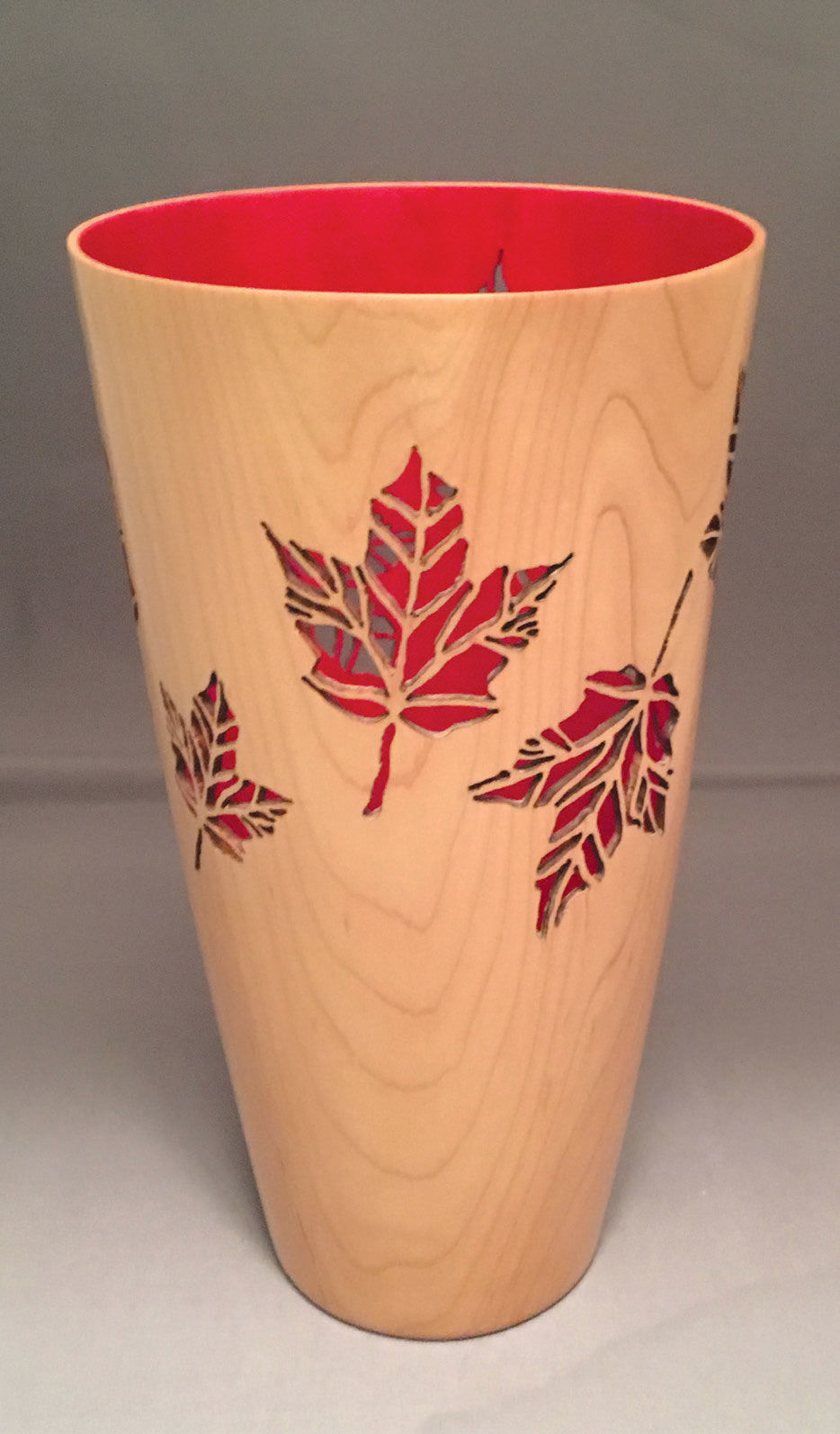 This maple vessel was turned to 1/16 inch thick with pierced maple leaves and the inside dyed red.

A footed maple bowl, dyed blue on the outside with ebony legs, was turned by Charlie Sheaff

Charlie Sheaff turns a large platter at the lathe

A Purpleheart wine bottle with maple wine glass on the inside is an example of inside-out turning.

The coloration of this ambrosia maple vase is caused by staining of the ambrosia beetle.

This maple vessel was turned to 1/16 inch thick with pierced maple leaves and the inside dyed red.

In this age of gadgetry and impersonal communication, there’s something to be said for more tactile endeavors, be it fabric, clay, paint or wood.

The Monadnock Woodturners Club is testament to this philosophy, as it has been celebrating the pleasures of working with wood for more than two decades.

The group’s president, Charles Sheaff, has been turning wood for more than 35 years, having recently retired from teaching at Keene State College. He is still involved in teaching woodturning, offering weekend classes through the continuing education program at the college.

He is also a juried member of the League of New Hampshire Craftsmen, and a member of the Guild of New Hampshire Woodworkers. Sheaff considers himself a “generalist” turner, in that he has no one signature piece, but rather is intrigued with trying new and different techniques that he can share with the students in his classes and other woodturners.

Woodturning is one of the most ancient arts, with evidence that the ancient Egyptians were practicing it as early as the 7th century B.C. The Romans took over the craft, which was then embellished upon during the Middle Ages. With the Industrial Revolution, the practice was motorized, although individual craftsmen still plied their trade in the time-honored tradition.

“All of this started back in 1995," Sheaff explained. “There was a group of doctors working at Dartmouth-Hitchcock who discovered that they had a mutual love of woodturning. They then came up with the idea of reaching out to other like-minded people, and put a small ad in the paper, inviting anyone who was interested in this craft to contact them."

This endeavor quickly paid off, and soon the hobbyists and their new friends were meeting at each other’s houses on a regular basis.

“I got involved because I was the woodturning teacher at Keene State College for 34 years, where I did a lot of work with the kids, " Sheaff said. “We’ve been meeting once a month ever since then. Basically, we have people bring in their pieces, so they can show what they’re doing and trade ideas with other members.

“We also have a program where we go over a specific process in woodturning. This could involve a technique that a member has learned and wants to share with the group."

“We regularly contribute to the Empty Bowls Project, which is an initiative to help the hungry,” he said. “We make a number of bowls, which are then put up for auction to raise funds. Of course, that’s only one of the charities with which we work.”

Sheaff said that the group has had a number of notable exhibits recently, particularly one held in October at the Ash Hill Center for the Arts in Swanzey.

“I don’t want people to think this is just all about bowls,” he said. “Anything is worth trying. For instance, we have a couple of members who make their own wooden pens, and that’s all they do. We welcome anyone who is interested in woodturning in any form.”

Sheaff said that the popularity of the meetings has exceeded his greatest expectations.

“It’s amazing how many people show up," he said. “At our last meeting, we had over 60 people in attendance. There are a lot of people who are really interested in this."

The Monadnock Woodturners Club meets on the second Tuesday of every month at the Keene State College woodshop at 229 Main St. in Keene and can be reached at 313-1138. For more information, visit the group’s website at monadnockwoodturners.wordpress.com or visit its Facebook page.