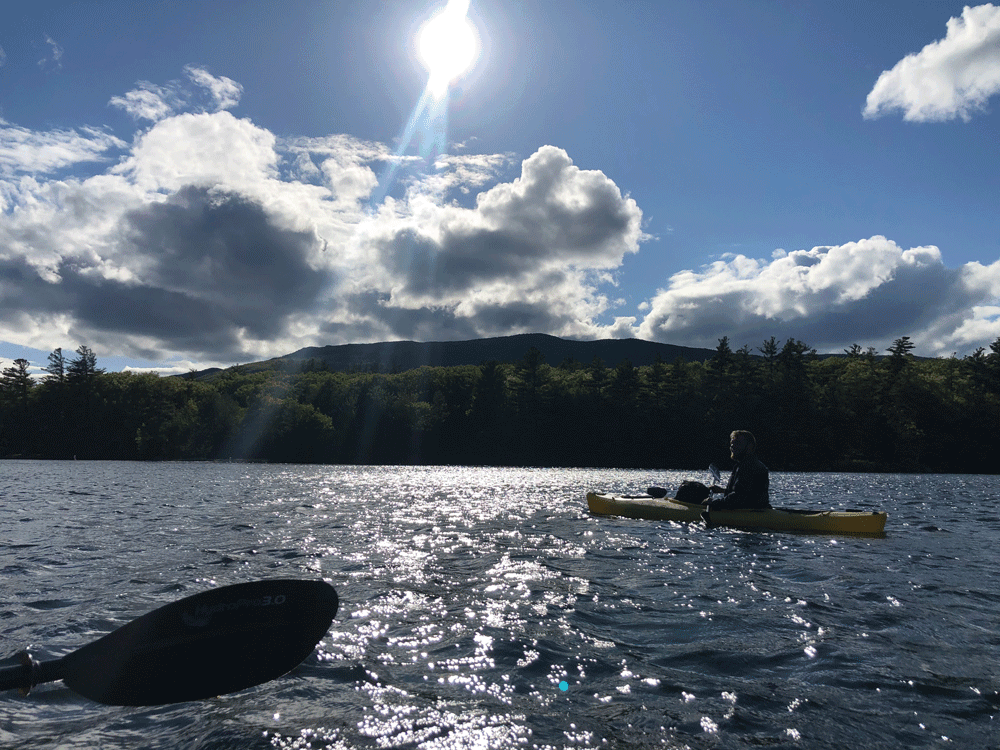 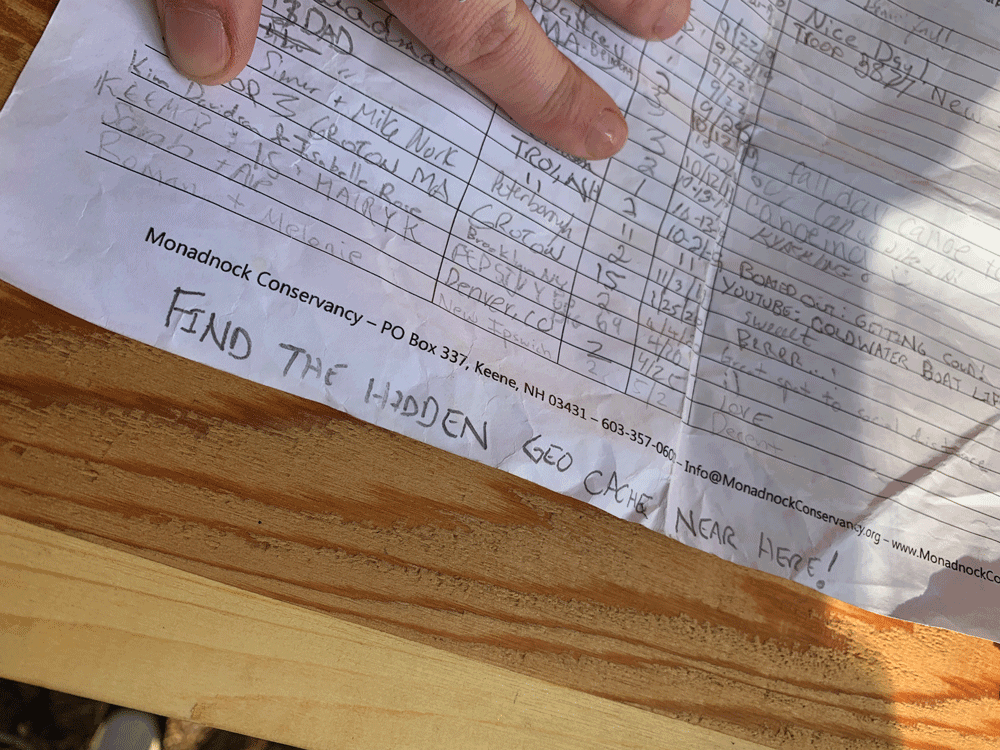 As they approached Whittemore Island in Jaffrey on their respective kayaks, Brock Bertram and Liana Scollans were more than excited to find out what lie ahead. Their backpacks were filled with hammocks, some snacks, beach towels, a couple of Toadstool stickers and a sweatshirt in case it got cold — who knew how long they were going to be there.

It was a beautiful May afternoon. The sun was shining, the birds were chirping, and the geocache they were looking for was so close they could feel it. This particular trail had been marked as a high difficulty level on the geocache app, perhaps because folks need a canoe or kayak to get to this mysterious and overgrown little island. The voyage was certainly worth the tough trek. Once the duo found a safe place to stow away their kayaks, they approached a small wooden podium with a visitor’s log that read, “FIND THE HIDDEN GEO CACHE NEAR HERE!” on the bottom of the sheet.

Whittemore Island is located at the base of Mt. Monadnock, right on Thorndike Pond. This serene slice of paradise is hardly ever busy, so Bertram and Scollans had the whole island to themselves this warm and welcoming May day. The groomed trails were easy to maneuver, and the duo quickly made their way to the south side of the island where there was a perfect spot to set up their hammocks and cool off with a nice quick swim before finding the treasure trove they’d been so motivated to uncover.

“We were so excited to find it!” Bertram recalled. “Who would have thought that two 20-somethings would find so much excitement in a little treasure hunt?”

That’s the great thing about geocaching… it’s fun for people of all ages. For those who aren’t familiar with the term, geocaching has become a country-wide phenomenon over the last decade or so. Think of geocaching as a modern take on the age-old concept of scavenger hunting. Cache hunters can use GPS to pinpoint exactly where these various weather-proof containers are located on trails around the state, country and even the world.

The caches themselves come in many different shapes and sizes, with some of them simulating rocks, pinecones and logs. The caches are weather-proof, crush-proof and critter-proof, so they can withstand all seasons and elements. Each cache contains a weather-proof pad of paper, allowing hunters to sign their name and date exactly when it was found.

In addition to the logbook, geocaches contain some fun goodies or “swag,” as they are called. The swag could be anything from bracelets to stickers, acorns, or even rocks. Folks can trade out some of the swag in the cache with swag of their own, or just leave it be and enjoy the goodies as they are. The caches are never buried; hunters are supposed to hide them well enough that even those with a sharp eye might have a hard time spotting them on the trail.

According to the Geocache website, there are close to 9,000 caches hidden throughout the Granite State, with a lot of them being accessible year-round. Whittemore Island’s geocache is a good one to save for a warm summer day, but one look at the app or website will highlight the fact that there are some great trails to do on a beautiful winter’s day, too, with rather easy access to the caches themselves.

After a quick dip in the water and a snack break, Bertram and Scollans made their way along the trails of the island, keeping a sharp eye out for the cache they were looking for. Sure enough, slightly off the beaten path behind a hollow tree and under a pile of dead leaves was an army-green box with the words “OFFICIAL GEOCACHE, DO NOT DISTURB” painted across the top. Upon opening the box, they noticed two of their friends had been there about a week prior, and had signed their names accordingly.

“It was so cool seeing that our friends had also found this one!” Scollans laughed. “It made the whole experience that much more exciting for us.”

The duo signed their names in the logbook and acknowledged the fun trinkets from past explorers — rocks, pinecones, funny jokes written on the pad of paper. The two then placed the stickers from Toadstool (their favorite bookstore in Peterborough) in the box, and carefully placed it under some leaves for the next explorers to find. As they got back into their kayaks and softly drifted into the water, they appreciated their surroundings and thought fondly on their quiet and relaxing time at the island — an island they wouldn’t have otherwise explored without the handy Geocache app. Another beautiful day in New Hampshire well spent!

Geocaching is a fun activity for families and friends alike – not only will it get everyone out of the house, but the treasure hunt might just lead to places that may have not otherwise been explored. In a time of uncertainty and unanswered questions, there’s something about a simple treasure hunt in one’s home state that can bring great wonder and expedition to those who might need it.