Last week, the state education department announced the release of federal funds that include more than $90,000 for area schools to support students experiencing homelessness.

When Congress approved the American Rescue Plan in March, the COVID-19 stimulus package included $800 million to assist students nationwide who are homeless. That money is now making its way to local learners.

More than $1.7 million has been released to 52 schools across the Granite State, according to an Oct. 27 news release from the N.H. Department of Education.

Nearly 240 students in the Monadnock Region experienced homelessness in the 2019-20 school year, the department’s data show. Statistics for the most recent year are being validated and will be available within the next month, department spokeswoman Kimberly Houghton said in an email.

The American Rescue Plan grants supplement money received under Title I, which is provided to schools with high numbers of students from low-income families, according to the U.S. Department of Education.

Title I funds can be used for a range of purposes, including identifying students experiencing homelessness or for the costs of health and transportation services.

The Monadnock Regional School District, which covers Fitzwilliam, Gilsum, Richmond, Roxbury, Swanzey and Troy, was allocated $13,000 in the recently released funding. And while Monadnock officials have yet to determine how the money will be spent, it will provide new opportunities to address homelessness within the district, according to Assistant Superintendent Jeremey Rathbun.

“This extra money is allowing us to do some extra things we haven’t been able to do,” he said. “And we’re excited about that.”

School officials have been discussing potential uses for the money and are seeking input from Monadnock families who are homeless to see what their needs are, Rathbun said.

People are often surprised that schools can help families with a range of challenges, such as providing clothing or organizing dental appointments, Rathbun said. The district has a few ideas for how the American Rescue Plan funds could be used, including bringing attention to issues of homelessness, he said. An awareness campaign would not only let families know that assistance is available, but also inform minors who aren’t living with a parent or guardian that they have options, and help staff know what they can do if they identify students in transient housing situations.

“Once we have that solid public input and we feel comfortable that the ideas we have are the best way to use these funds,” he said, “we’ll get them up and running.”

As assistance programs tied to the COVID-19 pandemic wind down, now can be an especially difficult time for families without stable housing, according to Jennifer Alexander, the McKinney-Vento liaison for the Keene School District. (The 1987 McKinney-Vento Act requires schools to provide services and support to youth experiencing homelessness.)

“I can say that since the eviction moratorium has been lifted, I have been noticing a greater number of families who are doubled up … and being doubled up — not by choice but by hardship — is part of the definition of homelessness,” she said, referencing a temporary ban on residential evictions established earlier in the pandemic. The statewide housing crisis makes it even more difficult for families to find suitable housing, she said.

In her role with the Keene School District, Alexander works with students and their families to ensure children have the support they need to do well in school. This can take many shapes, she said, including organizing transportation for students who may move out of the district but would like to remain enrolled at their “school of origin,” purchasing clothing and school supplies, enrolling students in free or reduced lunch, or even buying sports equipment for kids involved in extracurriculars. These services are covered by federal Title I funds, she said.

Keene has been allocated approximately $23,000 under ARP, according to the department of education.

Winchester School District was allocated about $10,000. Business Manager Teresa Taylor said the funds — which will be “budgeted and used as needed” — aren’t sent directly to the district, but the district will be reimbursed after the money has been spent on pre-approved purposes.

Districts that have been allocated less than $5,000 are required to form a consortium in order to receive the funds, according to the department of education news release. Once a consortium is formed, the participating districts can pool the funds to be used jointly or split them into the initial allocations, with one district acting as a grant administrator in both cases, according to Houghton, the department’s spokeswoman.

District: ARP allocation; number of students who experienced homelessness in 2019-20 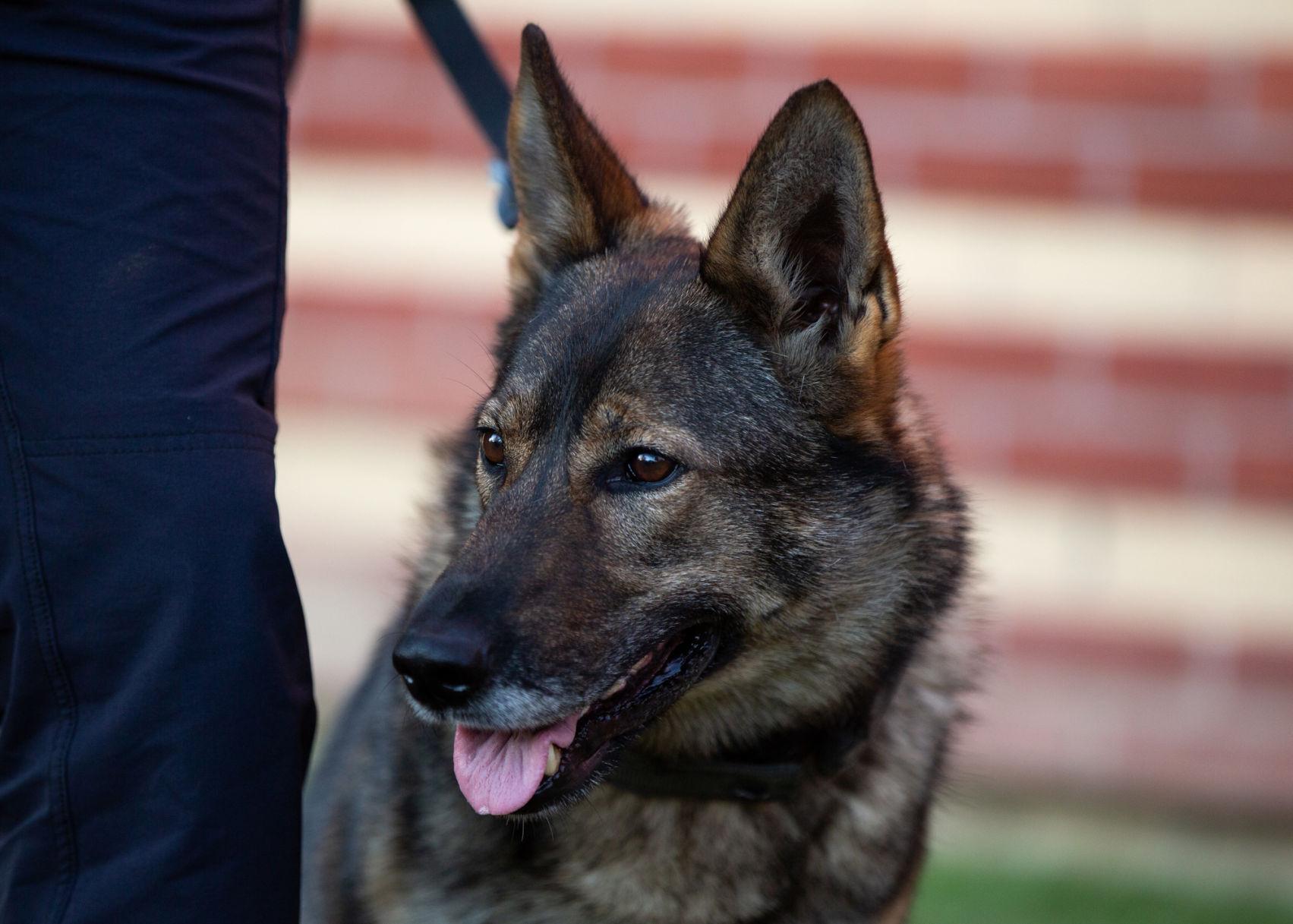 Keene police Officer Mike O’Donnell holds a leash on Blanca, the department’s new K9, outside the station on Wednesday evening. O’Donnell went to Tennessee in September to train with Blanca for two weeks after she arrived from Holland. 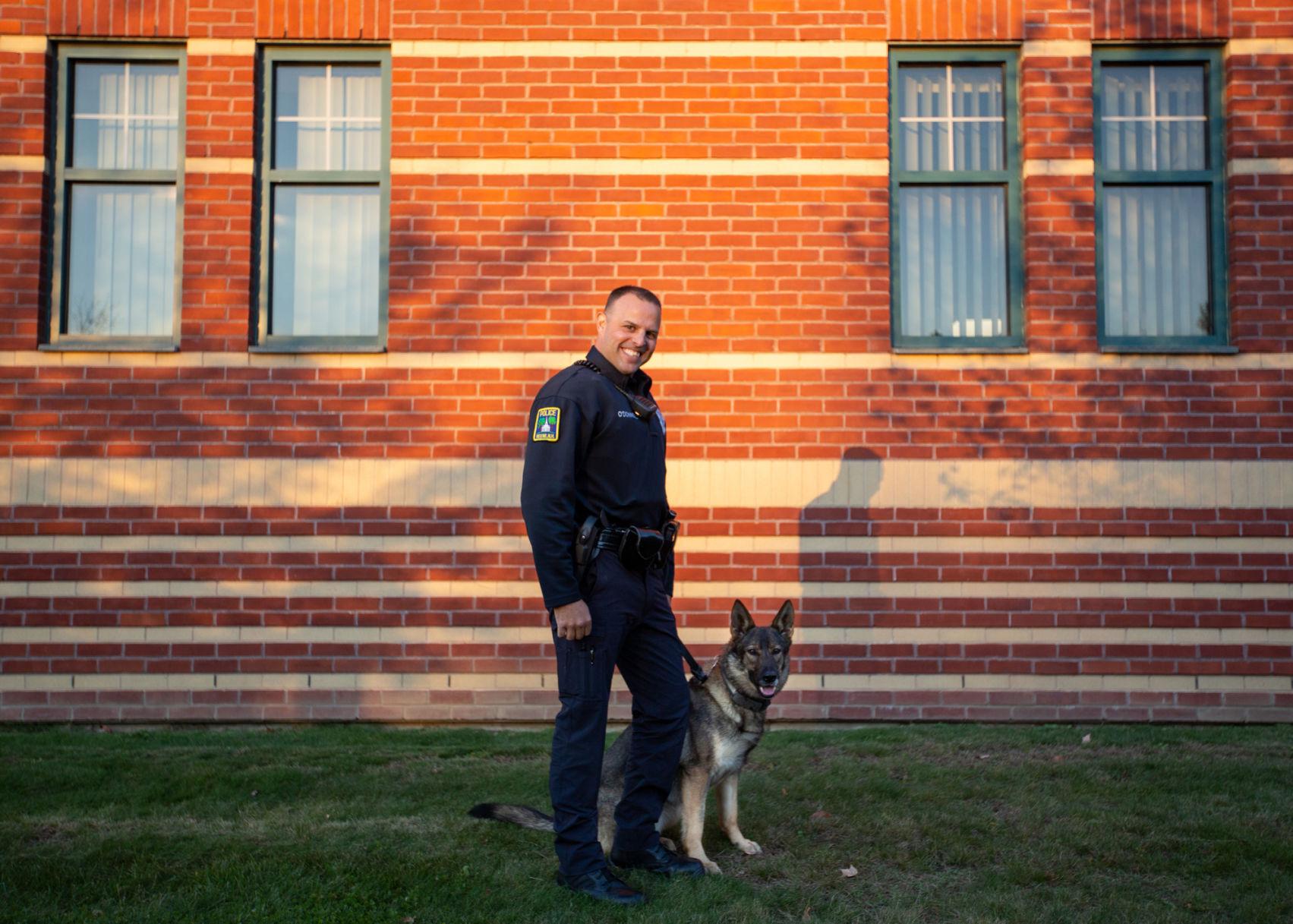 Keene police Officer Mike O’Donnell holds Blanca, the department’s new K9, outside the station on Wednesday evening. O’Donnell went to Tennessee in September to train with Blanca for two weeks after she arrived from Holland.

CONCORD — As liquor stores from Texas to New York face shortages on their shelves, the N.H. Liquor Commission is saying its policies put the Granite State in better stead to weather the coming holiday demand in light of supply-chain holdups.

“New Hampshire is more fortunate than other states because of the Liquor Commission’s ordering practices, our inventory requirements and the capacity we have in our million-plus-case warehouse in Bow,” said N.H. Liquor Commission spokesman E.J. Powers. “All that being said, supply-chain issues are very real and will impact every liquor retailer throughout the country at some point, especially during the busy holiday season.”

Traditionally, winter holidays evoke times of festivities with loved ones and co-workers that include alcoholic beverages, sometimes to consume and at other times to give as gifts to others, Powers said. In light of that, the Liquor Commission is offering advice to its customers.

“If you have something special you want for yourself or to give as a gift, you should purchase it sooner rather than later,” Powers said.

But unlike some other areas of the country, Powers said the New Hampshire is not anticipating rationing its product sales or establishing quotas. Pennsylvania and Virginia recently instituted quotas on how much customers can buy at a time for certain popular brands.

Supply-chain problems, stemming all the way from manufacturers’ abilities to access the raw materials, packaging, workers and fuel, to being able to transport their product to wholesalers and retailers are causing problems everywhere, as the world tries to resume pre-coronavirus pandemic standards. The additional cost of materials, help and gasoline, and the scarcity of haulers and transporters are driving up the cost of products from food and drink to electronics, automobiles and other necessities.

The supply-chain problems come following a record sales milestone for the N.H. Liquor Commission. In May 2021, it announced the most successful year in its 87-year history, with sales reaching $765 million, a 5 percent or $36.5 million increase over the previous year. It provided total net revenues of $155 million, money the Granite State uses to underwrite the cost of running state programs.

The N.H. Liquor Commission is one of the top revenue producers for the state. Fiscal 2021 brought the agency’s total net revenue to more than $4 billion since it opened its doors in 1934, according to the commission.

The reasons behind the increase in last year’s liquor sales during the COVID-19 pandemic that kept people at home for months are unique in many ways, Powers said. Although the commission expects a healthy revenue stream this year, it was realistic in projecting its bottom line.

“We anticipate a strong year this year,” Powers said, “but not as robust as last year.”

Like other employers in New Hampshire, Powers said the “help wanted” sign is out for workers at Liquor Commission retail outlets to join the agency’s full and part-time employees.

“We’re really fortunate to have a wonderful and very knowledgeable staff in our 1,200 full- and part-time employees,” he said. “But we’re struggling along with every other retailer in the state, working hard to fully staff our outlets.”

This article is being shared by aa partner in The Granite State News Collaborative. For more information visit collaborativenh.org.

The first edition of the New Hampshire Sentinel, published on March 23, 1799, is among those now digitized and searchable online thanks to a r…

Want to know what President William Howard Taft said when he came to Keene during his four-year presidency from 1909 to 1913? But not sure when, exactly, he visited?

Those records are now available online after the Historical Society of Cheshire County recently completed a project to digitize all Keene Sentinel editions from the paper’s creation in 1799 through 1945.

Alan Rumrill, the historical society’s executive director, said the new archive — which can identify stories with any specific term and is available for free via the organization’s website at www.hsccnh.org — will help assist research projects on a wide range of local issues. (A keyword search can identify all Taft-related articles, among other topics.)

Historical society staff have long been interested in digitizing the newspaper’s early editions, which are held on microfilm at Keene Public Library and the N.H. State Library, according to Rumrill. However, the technology needed for that task became available only recently, he said Thursday.

After working with The Sentinel and both libraries to secure funding for the digitization project, the historical society contracted with the Iowa-based firm Advantage Archives, which began that effort earlier this year, Rumrill said.

For both researchers and area residents, he said the new archive offers a window into the past. Those stories have largely been inaccessible, Rumrill said, with no way to search for a specific topic in the microfilm records.

“The newspaper reporting, on all sorts of local activities, includes information that is not available anywhere else,” he said.

Founded by John Prentiss in March 1799 as the weekly New Hampshire Sentinel, the paper added a daily publication, The Keene Evening Sentinel, in 1890. It has published continuously since then, maintaining an online version of all stories written in recent years, according to Publisher Tom Ewing.

Noting that it is “cumbersome” to comb through the microfilm records, Ewing said the digital copies will help people learn more about the region’s past.

“It’s certainly going to make it easier for people who want to look at those old issues,” he said.

Beneficiaries of the digitization project include someone researching the history of the local Jewish community, Rumrill said. Rather than poring over individual editions of the newspaper, he said, a simple search for “synagogue” now reveals a trove of information.

“The longevity of the paper itself makes it a rich record for the region,” he said.

Along with contributions from city and state libraries, the historical society tapped private donors to help raise more than $25,000 for the digitization project, according to Rumrill. That was enough to support a digital archive through 1945, though he voiced interest in extending the new records beyond that date if the organization’s other partners agree to it and more funding is available.

Working on his weekly Sentinel column — this one about the first airplane crash in Keene history, in July 1911 — he said Thursday that he’d come across conflicting names and dates in the existing record. He resolved the issue by browsing Sentinel stories from that time.

“It tells the story of the Monadnock Region, Keene especially, for close to 150 years,” he said of the digital archive.

The first edition of the New Hampshire Sentinel, published on March 23, 1799, is among those now digitized and searchable online thanks to a r…

District: ARP allocation; number of students who experienced homelessness in 2019-20

Click and hold your mouse button on the page to select the area you wish to save or print. You can click and drag the clipping box to move it or click and drag in the bottom right corner to resize it. When you're happy with your selection, click the checkmark icon next to the clipping area to continue.