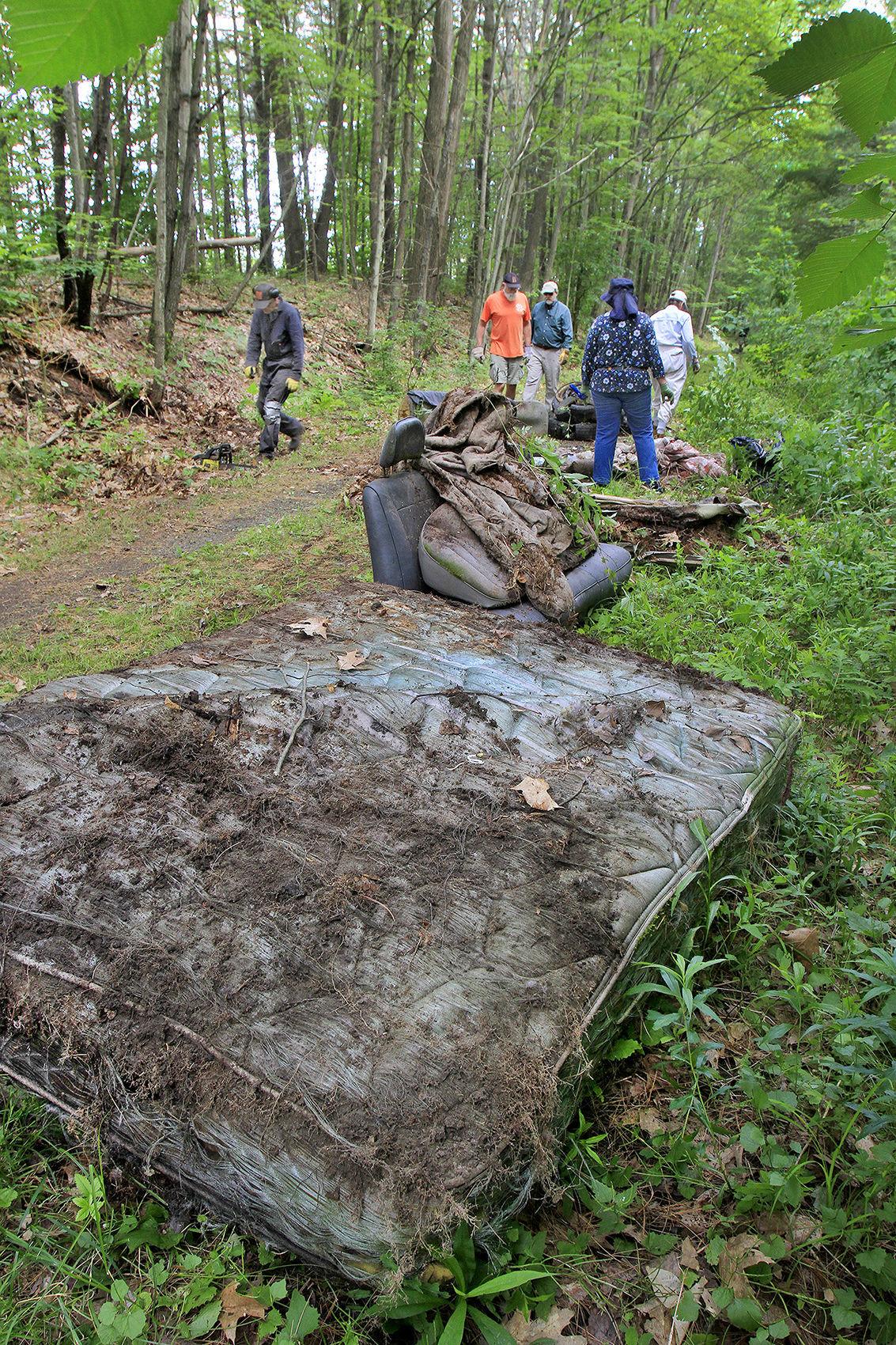 The town of Swanzey Rail Trail Advisory Committee held a trail clean-up Friday along a 1,500-foot length of the Cheshire Rail Trail off Route 12, across from the Cheshire Fairgrounds. Large items had been dumped there, including this mattress, car seats and a truckload worth of tires. The town hopes to install a temporary gate to prevent future dumping.

Can police officers fire at a moving car or use chokeholds? Should they try to defuse tense situations before resorting to force?

The U.S. Supreme Court has articulated basic limitations on the use of force by law enforcement officers, and New Hampshire state law broadly defines when it’s justified.

But more specific rules — including answers to the questions above — are generally found in the policies of individual police departments, as well as being imparted through training.

The Sentinel reviewed the policies of 22 local, county and state police departments in New Hampshire and Vermont to see what they said about four specific topics — banning neck restraints, prohibiting firing at moving vehicles, requiring de-escalation techniques and establishing a duty to stop excessive force by colleagues.

These are far from the only topics covered by use-of-force policies. But they are measures that policing experts commonly recommend and many U.S. departments have adopted, and they’ve garnered attention in the wake of the police killing of George Floyd in Minneapolis and the nationwide protests that followed.

Most of the local use-of-force policies viewed by The Sentinel contained one or more of those provisions. Just two appear to include all four — those of the Cheshire County Sheriff’s Office and the Dublin Police Department, which updated their policies this month to include some of those elements.

Charles Reynolds, a retired Dover police chief and police consultant, recommends those measures, though he cautioned against reading too much into the fact that a policy may be missing them. A police chief may not have thought it necessary to expressly prohibit a practice that officers aren’t trained to use in the first place, for instance, as is the case with chokeholds in New Hampshire.

“It’s not a procedure or a restraint or a control technique that’s taught” at the state police academy, he said. “Therefore, I wouldn’t be very critical of departments that don’t include that prohibition, because it’s not included in their range of acceptable conduct.

“... But given the present environment,” he added, “where people are looking for explicit prohibitions, and in cases where decision-making may go astray of training, it’s probably a good idea.”

Reynolds said training and supervision are also important, alongside the policy itself.

The larger the department, the more important it is to craft detailed policies, he said. In small-town departments, community standards and direct supervision of a small staff can help enforce norms of behavior.

“There’s a lot of complexities in policing that they may or may not run into, and when you have large numbers of officers … you can’t communicate with them individually,” he said.

In the month since a video showed Minneapolis police officer Derek Chauvin kneeling on George Floyd’s neck, there have been calls at the local, state and federal levels to ban chokeholds.

Some police departments differentiate between chokeholds that constrict a person’s airway and “carotid holds,” meant to put pressure on blood vessels and render someone unconscious. Both can cause serious injury or death, according to a recent L.A. Times article.

Local police chiefs and experts say officers in New Hampshire are not taught to use any type of neck hold, and their use would be justified only as a last resort.

Of the policies reviewed by The Sentinel, at least seven — Antrim, Brattleboro, the Cheshire County Sheriff’s Office, Dublin, Jaffrey, Peterborough and Vermont State Police — prohibit neck restraints or expressly limit them to situations in which deadly force is authorized. Most of the policies don’t address them one way or another.

Until recently, at least three policies classified chokeholds as a “defensive technique,” rather than deadly force. Keene and Hinsdale updated their policies this month to change that, and Chesterfield was planning to do so as of mid-June.

Chiefs in those departments said the outdated language had been left in the policies as an oversight, and their officers are not trained to use neck restraints.

New York City banned this practice in the early 1970s, and both fatal and non-fatal police shootings immediately fell, according to the Police Executive Research Forum, a D.C.-based think tank. Experts say firing at moving vehicles puts bystanders at risk without being all that effective.

“If you shoot at a moving vehicle, and you kill the operator or wound the operator, the vehicle continues to move,” Reynolds, the former Dover chief, said.

There are narrow exceptions to this rule, such as when a driver is firing a gun through the window, rather than the car itself creating the hazard.

Most area policies reviewed by The Sentinel — at least 16 — prohibit firing at moving vehicles except in rare circumstances.

“When a moving vehicle is involved, use of deadly force by discharging a firearm is dangerous, can be ineffective, and should not occur when there is an unreasonable risk to the safety of persons other than the subject,” Winchester’s policy states. “Whenever possible, officers should avoid placing themselves in a position where use of deadly force is the only alternative.”

John Scippa, the director of the organization that runs the N.H. Police Academy, said every officer has an “absolute obligation to protect the welfare” of someone under arrest and stop colleagues from using excessive force.

“Police officers have an affirmative duty to not only refrain from using excessive force themselves, but to prevent other officers from doing so as well,” state the policies of Swanzey and several other departments.

A handful of local policies explicitly state that officers should try to de-escalate situations whenever possible to avoid having to use force.

De-escalation methods can include everything from communication to repositioning oneself so a person with a knife poses less of a threat.

“In most instances, the goal of de-escalation is to slow down the situation so that the subject can be guided toward a course of action that will not necessitate the use of force, reduce the level of force necessary, allow time for additional personnel or resources to arrive, or all three,” the International Association of Police Chiefs says in its National Consensus Policy on Use of Force.

That does not mean de-escalation must be tried in every situation, such as when an officer is in imminent danger.

The Cheshire County Sheriff Office’s updated policy says a “sworn member shall use de-escalation techniques and other alternatives to higher levels of force” and “allow an individual time and opportunity to submit to verbal commands” before using force, as long as it doesn’t compromise safety or allow the person to escape.

The Dublin Police Department also expressly states that officers should de-escalate where possible, and Keene and Swanzey have similar, if shorter, provisions.

The Sentinel did not find such requirements in other policies, though many of them instruct officers to rely on verbal persuasion whenever possible. Winchester’s policy includes a detailed definition of de-escalation and says officers are to be trained in it regularly.

The policies of seven local towns were not reviewed because they denied The Sentinel’s public-records requests or have not yet responded. The policies that have been provided can be read in full online at sentinelsource.com/use-of-force.

This article has been updated to clarify that Hinsdale has removed language authorizing neck restraints since providing a copy of its use-of-force policy to The Sentinel earlier this month. It has also been updated to include information about the Dublin Police Department's policy, which was provided after press time.