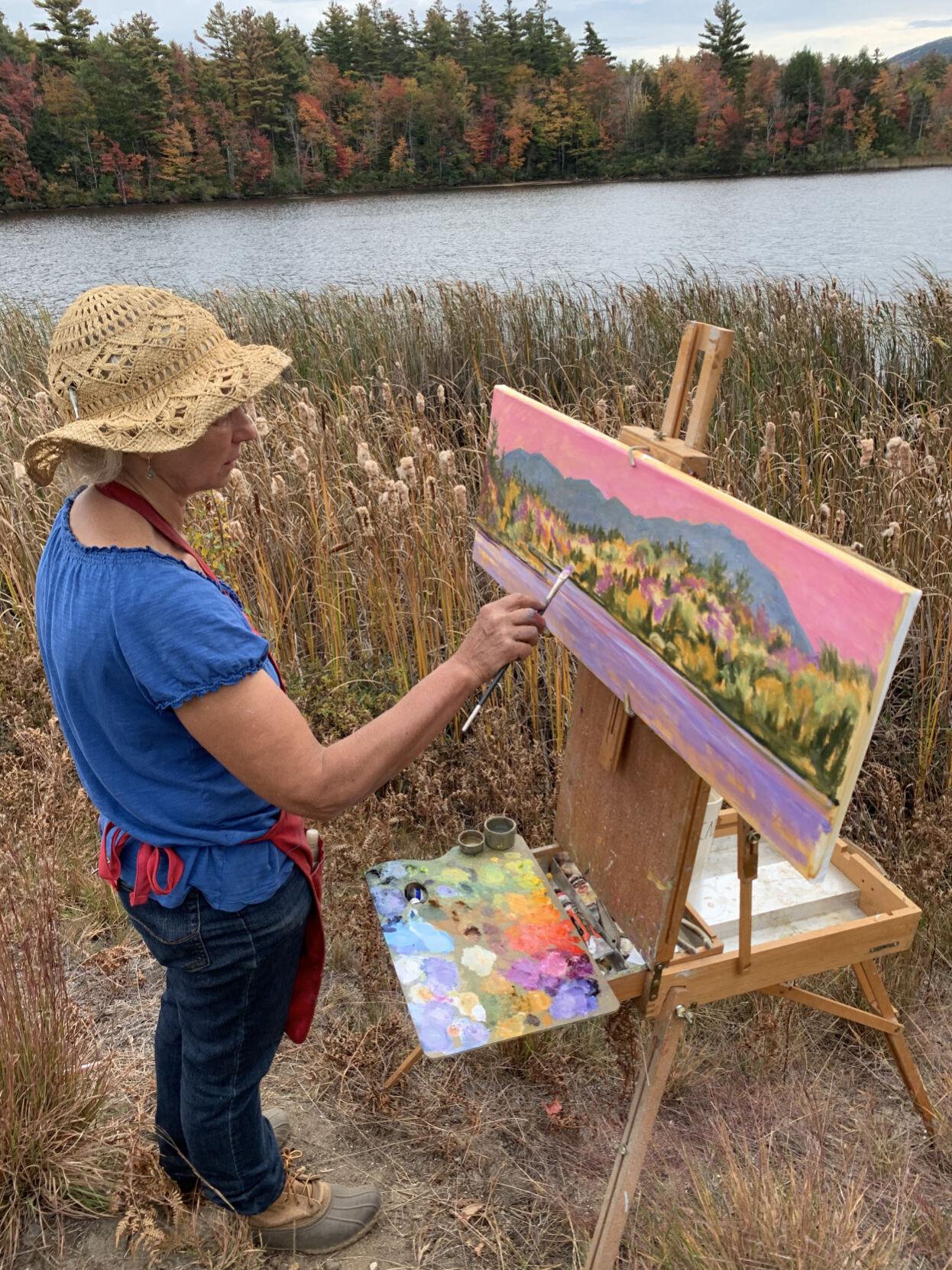 Mary Iselin of Marlborough captures the fall colors with her paint palette at Howe Reservoir in Dublin late last month. A gorgeous weekend is shaping up in the Monadnock Region, with sunny skies and warm temperatures.

Thus far, the improvement in the state’s employment outlook has been slow, but last week it sped up a lot.

Initial unemployment claims fell by 31 percent to 1,518 for the week ending Oct. 3. It was the largest one-week decline, by percentage, since the recession started in March.

The number of filings is still about three times higher pre-pandemic levels, but if the decrease continues at this new accelerated rate, the state could be back to normal — at least when it comes to number of new layoffs — by Election Day.

Some 32,243 Granite Staters continued to collect benefits during the week ending Sept. 26, though that number is also down, by 2,885, or 8.2 percent. In other words, nearly twice as many people went back to work that week then lost their jobs the next.

The state’s upbeat report is even more bright compared to the more sluggish national recovery. Some 840,000 Americans lost their jobs the week of Oct. 6, a 1 percent improvement.

While the number of unemployed people has declined locally and nationally, their situation has become more dire. This is the fourth week since the demise of the $300 weekly federal enhancement to unemployment benefits 300 — already down from the original $600 before that. That means that their checks are, on average, less than half of the amount they were at the start of the pandemic.

There was hope that Congress would bring those enhanced benefits back, but President Trump put an end to those negotiations after he returned from the hospital for his own COVID-19 treatment. There is the possibility of a narrower deal, but it seems to be focused on bailing out the airline industry, not those currently on unemployment.

With many young parents in the Monadnock Region struggling with substance-use disorder, grandparents have often had to step in and raise their grandchildren.

To help those in this situation, Maps Counseling Services in Keene is launching a new therapeutic program, part of a project run by the Dartmouth Trauma Interventions Center.

“It’s a lot more common than we may think, where grandparents are ready to retire and then have to raise a child,” said Kate O’Neil, one of the program facilitators. “Grandparents can feel pretty alone or guilty or shame from the position that they are finding themselves in and wondering what mistakes they already made. The hope is to create that connection and understanding.”

The Dartmouth project, called Moving Upstream, runs through Sept. 30, 2021, and is funded by the U.S. Department of Justice’s Office for Victims of Crime.

It is specifically for Cheshire County children up to 8 years old, according to the project’s website.

Logan Seeley, project coordinator at the Dartmouth Trauma Interventions Center, said the county was chosen for a few reasons. It expands on similar work being done in Sullivan and Grafton counties, Cheshire Medical Center in Keene is part of the Dartmouth-Hitchcock Health system and Maps has worked with the center before.

The project has several facets, including the Maps program. Other priorities include training for community leaders on the impacts of childhood trauma and creating a coalition with community agencies to assess the needs of families affected by the opioid crisis.

Maps’ free program consists of 10 weekly group sessions via Zoom with parents, grandparents or other caregivers from several families, according to Bethann Clauss, clinical director of Maps.

Ideally, she said, the group will have three to four families, totaling about 10 to 12 people.

Clauss said she believes this is the first intergenerational therapeutic program in the area. There are a few support groups for grandparents in these situations, but they are not professionally facilitated, she explained.

The sessions will be facilitated by Clauss, who has been a clinical social worker with a focus on childhood trauma for nearly 20 years; O’Neil, a fourth-year doctorate student at Antioch University New England with a background in special education and child development, trauma and attachment; and John Sannicardo, a licensed mental health counselor with experience in recovery work.

“We all come from different specialties, so we can hopefully offer support,” Clauss said.

The 90-minute sessions will each have a specific topic focus and will be broken into different sections for each family member to share what is going on in their life.

Sannicardo spoke to the necessity of this program, reflecting on his 11 years of experience directing substance-abuse programs in Massachusetts.

“I used to tell clients there’s no excuse to not stay in treatment because in Mass., there is good treatment to get with Medicaid or state funding,” he said. “But in New Hampshire, it’s feast or famine ... If you are uninsured or have Medicaid, you aren’t getting any help anywhere.”

He added that the length of the program will create sustainable progress; in support groups, where people can come and go as they please, that can be difficult, he noted.

By the end of the 10 weeks, Clauss said the hope is for participants to “feel more connected as a team.”

“We want people to know they are not alone with parenting and navigating these transitions,” she said.

Clauss said the program can be repeated as many times as Maps wants until the end of the grant, but it won’t start until the program reaches its target number of participants.

“We know that connection is the antibiosis of addiction, so as we are growing this group,” Clauss said, “we are trying to grow empathy to see situations in other people’s perspectives, which creates a much better environment for children to grow up in.”