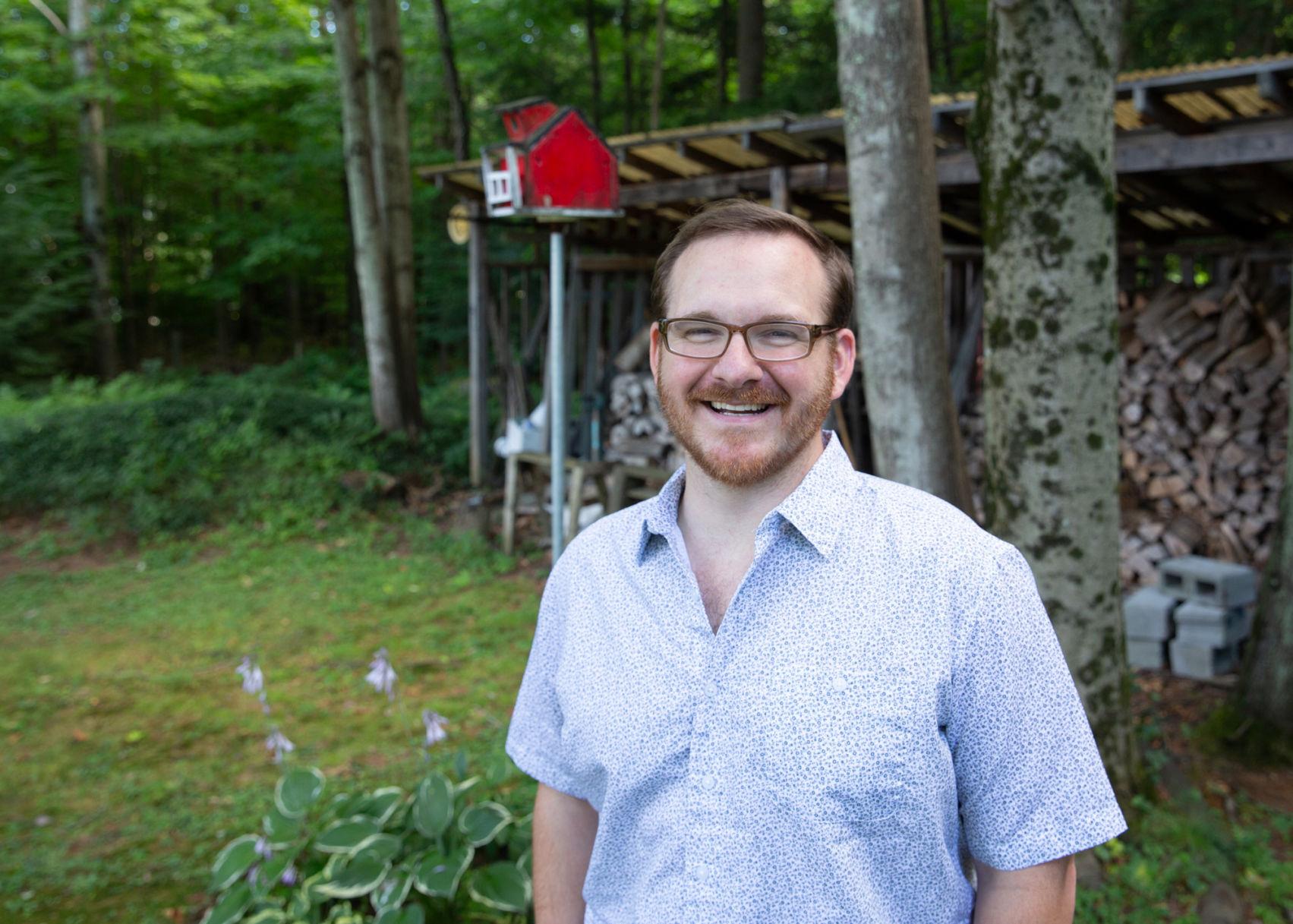 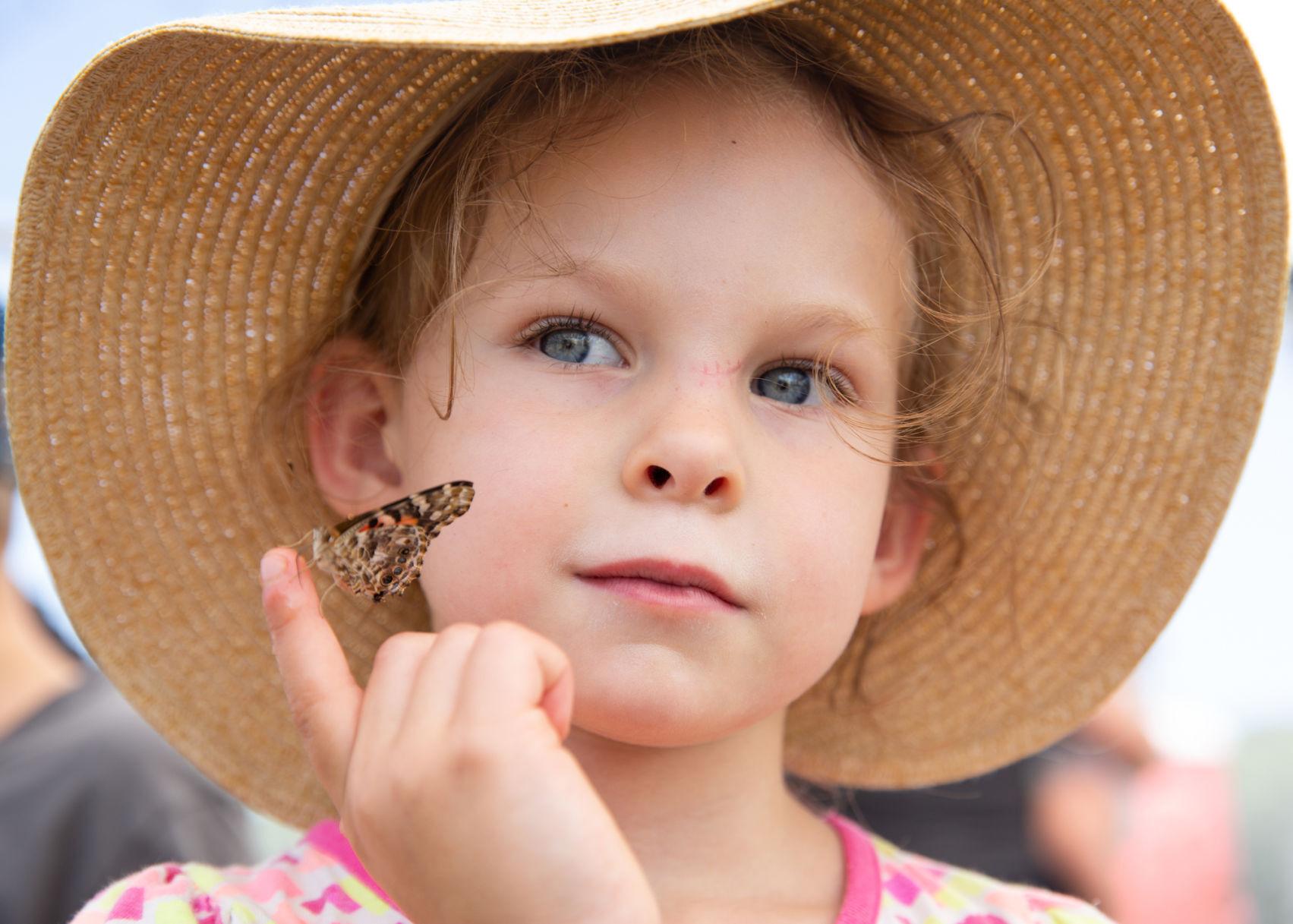 Evie Drogue, 4, catches a butterfly on her finger in the butterfly tent, run by Keene Girl Scout Troop #13028, Thursday morning at the Cheshire Fair. 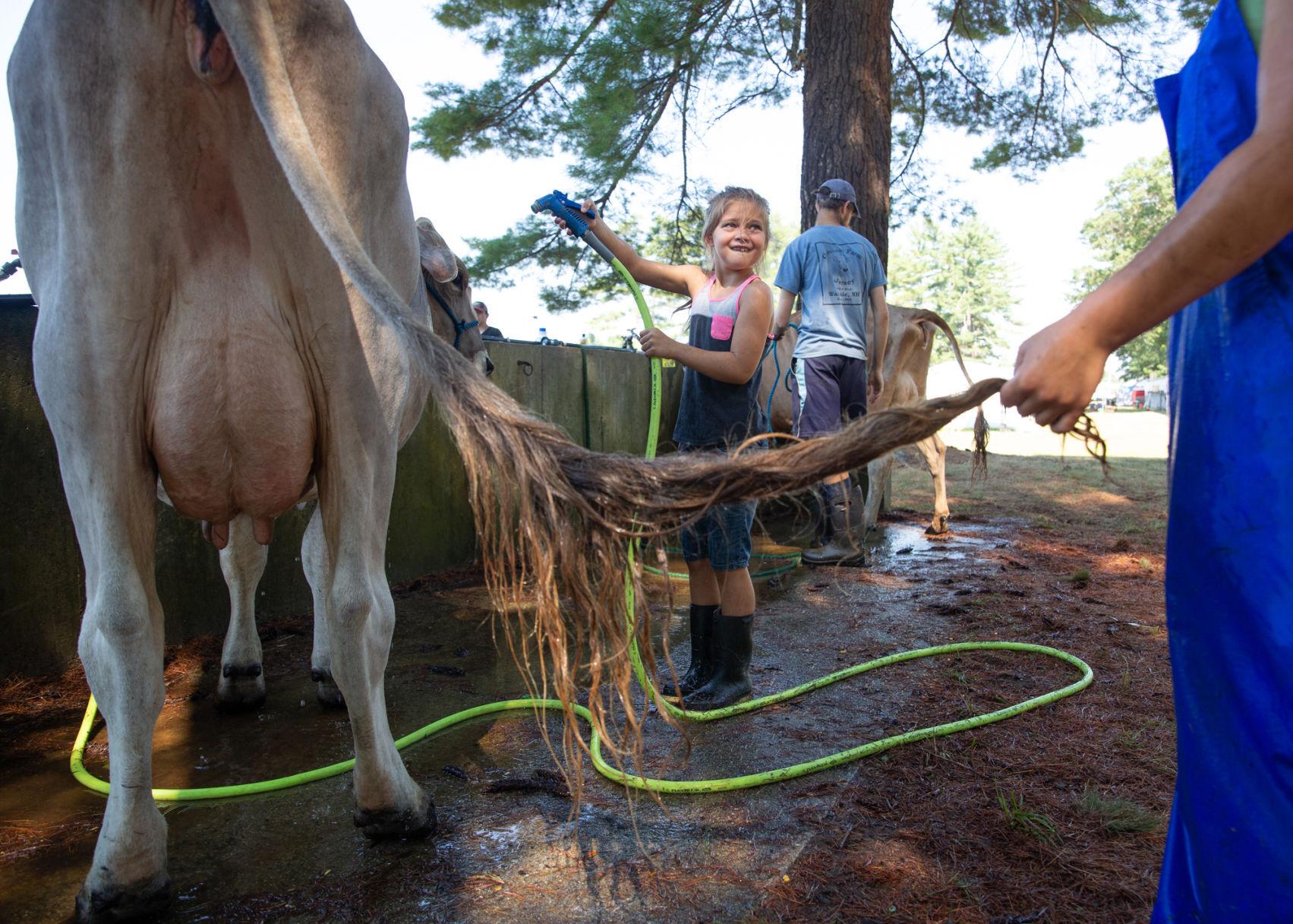 Megan Putnam, 8, of Swanzey, at left, washes Corona with Sage Stark, 19, of Charlestown Thursday morning at the Cheshire Fair as the animal shows kicked off the first day of the fair.

With rules for community-power programs in New Hampshire closer to being finalized, some area municipalities are eager to provide relief to customers amid soaring energy costs.

Keene resubmitted its plan to the N.H. Public Utilities Commission earlier this week, according to Mari Brunner, the city’s senior planner. Prior to doing so, she said, the city’s consulting team — which includes representatives of Standard Power and Good Energy — reviewed the rules and made minor changes.

“We are hopeful [Keene’s plan] will be approved by the PUC,” Brunner wrote. “If it is approved, the next step would be to get City Council approval for the changes that were made.”

Under a community-power arrangement — such as the ones Keene and Harrisville approved last year, and Swanzey, Marlborough, Peterborough and Walpole earlier this year — a municipal government rather than a utility sources electricity for local consumers. This gives the municipality more control over the power supply, allowing it to seek lower-cost or greener options, while a utility continues to maintain transmission lines and deliver the electricity.

Each of these plans must get a green light from the PUC, which first needed to approve rules for community-power programs after a state law authorized them in 2019.

After a vote on the rules was delayed from July 5, the commission approved them last week, allowing municipalities with community-power plans to move forward in their goal for state approval.

The Joint Legislative Committee on Administrative Rules must also OK the rules in a meeting slated for Aug. 18, before the PUC can formally adopt them.

Robert Hayden, president and chief technical officer of Standard Power of America, which also worked with Swanzey on its plan, said Thursday that the PUC must respond to Keene’s resubmitted plan within 60 days.

Brunner added that the city hopes to implement the plan in January, but it is more realistic it will launch in the spring.

Andrew Maneval, a member of the Harrisville electric-aggregation committee, said he expects the town to resubmit its plan within a matter of weeks.

If Harrisville’s plan is approved by the PUC, Maneval said the committee would then look to implement it and seek a suitable energy provider to recommend to the selectboard for approval.

Maneval, who is also a Democratic state representative, said Harrisville is optimistic that the power plan could launch next spring.

“The sooner [the PUC] responds, the sooner we can offer relief to customers,” Hayden said, referencing Keene’s plan. “Costs are the highest they’ve ever been. Any relief is great.”

“I think it is extremely important for communities to have more local control over where their energy comes from in order to control costs,” she wrote. “We hope to launch our program as soon as possible to offer our residents a cheaper option for electricity supply (in addition to greener options).”

When the City Council adopted the plan in May 2021, Keene was the first municipality in New Hampshire to pass one of these programs.

The city originally submitted its plan to the state on April 11, but the commission denied it on June 9 without prejudice — meaning it can be resubmitted for approval — due to it still being in the midst of its rulemaking process. At the time, Brunner said Keene had expected the rejection and was merely seeking feedback.

Harrisville’s plan was also denied without prejudice, primarily because of the lack of finalized rules.

Keene’s community-power plan, which would allow people to opt out of it, is a central tenet of the city’s broader plan, which the City Council adopted earlier in 2021, to move to 100 percent renewable sourcing for electricity by 2030 and for thermal and transportation energy by 2050.

Sylvester “Sly” Karasinski, a member of the Swanzey selectboard, is running for state Senate on a platform of fiscal conservatism in line with the present GOP majority in the N.H. Legislature.

His opponent in the Sept. 13 Republican primary for N.H. Senate District 10, Keene radio host Ian Freeman, has a different priority: He wants New Hampshire to secede from the United States.

Freeman, 42, said he’s not concerned about running for office while facing criminal charges.

“We are expecting to win when this goes to a jury trial,” he said.

Karasinski, 58, said Friday that the idea of New Hampshire seceding from the union is “crazy talk.”

Still, the issue was actually voted on in the last legislative session, and received more than a dozen Republican votes.

Rep. Matthew Santonastaso, R-Rindge, who is running for re-election, urged the N.H. House on March 10 to put a constitutional amendment before voters that would have New Hampshire “peaceably declare independence from the United States of America and proceed as its own sovereign nation.”

Karasinski’s priorities seem to be much more in tune with the Republican majority that now controls the Legislature.

He wants to make sure the state never adopts a general sales tax or an income tax and that it continues with its phase-out of the interest and dividends tax, which he said hits the elderly particularly hard.

“I’d be afraid that if the other side ever got ahold of the Legislature they’d probably reverse that course and bring back the interest and dividends tax,” Karasinski said.

The state Department of Revenue Administration says on its website that this tax is being reduced yearly and is scheduled to be fully repealed for taxable periods beginning Dec. 31, 2026.

Opponents say this tax reduction mainly benefits large, out-of-state corporations and contend the state could better help average citizens by supporting municipalities in a way that would reduce property taxes.

Karasinski, superintendent of the North Swanzey Water & Fire Precinct, favors maintaining a strong surplus, or Rainy Day Fund, “so if we ever do have another pandemic or problem we can survive it.”

The Republican-backed statute, approved last year, bans most abortions after 24 weeks of pregnancy. But Karasinski said it’s possible a fetus could be viable before that threshold, so he’d like to see the ban placed at 20 weeks.

He described himself as a “big proponent of school choice,” or the use of public money for parents to place their children in private school.

“I think state education funding should follow the child,” Karasinski said. “I think we all realize the big one-size-fits-all doesn’t work for everybody and there’s a lot of children out there who don’t have much luck with the public school system.”

He disagrees with the idea that overall support for public education is diluted by such school-voucher and publicly funded scholarship programs, and said he has concerns with some classroom instruction.

A Republican-supported law approved last year bans public school instruction about certain aspects of discrimination. It is often called the “divisive-concepts” law although these words don’t appear in the statute.

Karasinski has not read the law, but posed a question:

“Let me ask you, at what age do you think a child should be told they are racist based on the color of their skin?” Karasinski asked.

Opponents of the law say there is no evidence children are being taught any such thing, and Karasinski couldn’t point to any specific examples of this type of instruction.

“I don’t have that information but it has been out on social media and whatnot,” he said.

Meanwhile, Freeman’s campaign is based on harsh criticism of the federal government.

“They are oppressing the people of New Hampshire,” he said. “They are taxing, they are regulating, and that’s always been true whether Trump, Bush, Obama or Biden.”

The federal government is evil, he said.

“They kill countless hundreds of thousands if not millions with ongoing wars of aggression,” Freeman said. “There are hundreds of thousands of people in prison cells, many of whom haven’t harmed another human being. You’re doing wrong and harming brothers, sisters, neighbors and friends. That’s the epitome of evil to me.”

He asserted there is significant support for the idea of a state declaring independence from the United States.

A June 2021 survey by YouGov, a data analytics firm, and Bright Line Watch, a political research company, indicated that 37 percent of Americans, and 34 percent of those in the Northeast, had a willingness for their state to secede from the U.S. and join a new union with other states in their region.

However, the survey, which polled 2,750 people, cautions that the results reflect initial reactions by respondents about an issue they were unlikely to have considered carefully.

Freeman said he generally holds libertarian viewpoints and would like to put an end to laws against drugs, gambling and prostitution. He would like to let “adults make decisions for themselves.”

In the Nov. 8 general election, the winner of the race between Freeman and Karasinski will face the winner of a Democratic race between auto-dealership executive and state Rep. Donovan Fenton and software engineer and Keene City Councilor Bobby Williams.

The vacancy in N.H. Senate District 10 arises from a decision by N.H. Sen. Jay Kahn, D-Keene, not to seek a fourth term. 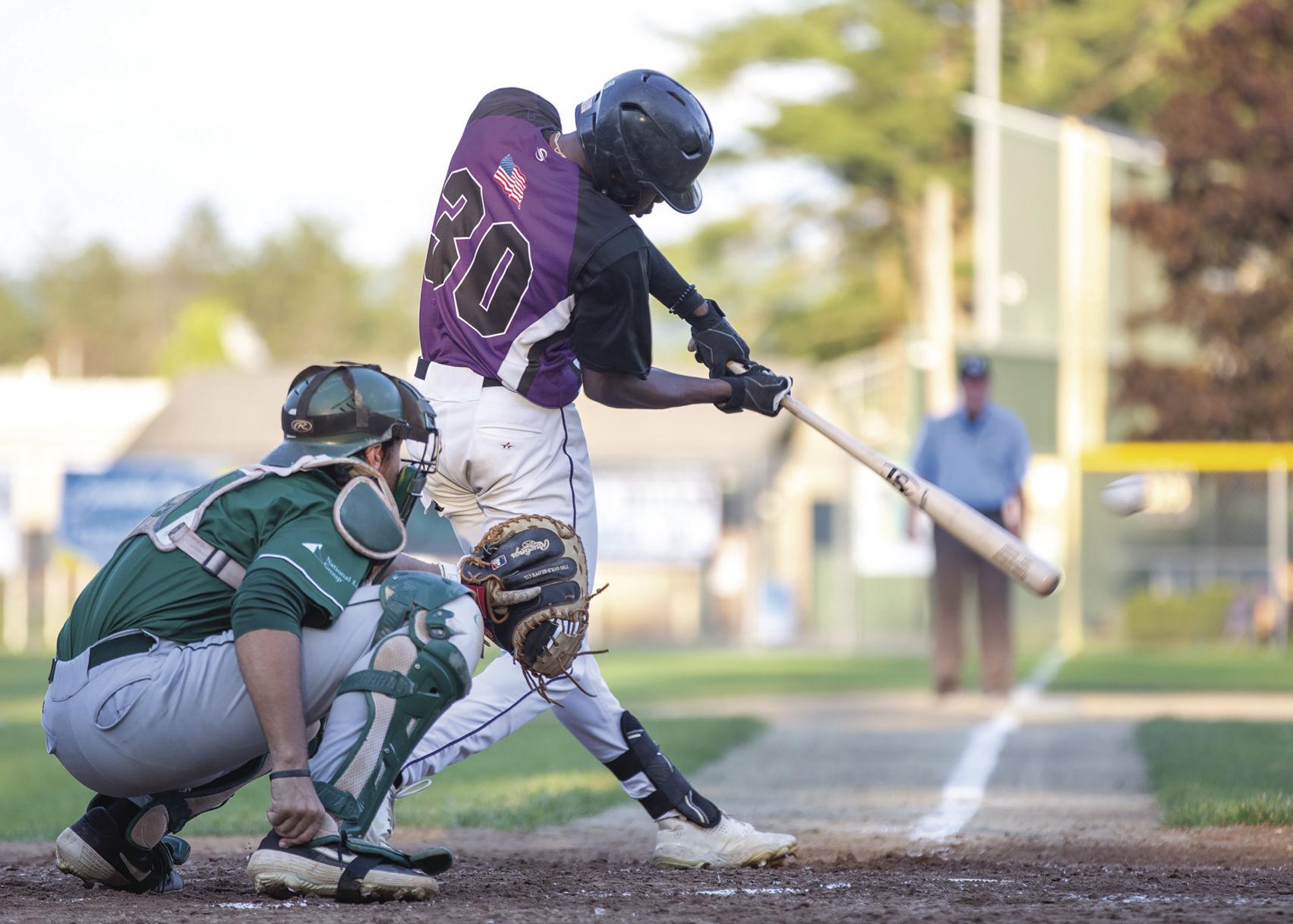 TJ McKenzie bats for the SwampBats against the Vermont Mountaineers Friday night, July 29, at Alumni Field during their last home game of the season.

Click and hold your mouse button on the page to select the area you wish to save or print. You can click and drag the clipping box to move it or click and drag in the bottom right corner to resize it. When you're happy with your selection, click the checkmark icon next to the clipping area to continue.