Canal Street in Brattleboro is lined with apartment buildings.

One of the many apartment buildings in downtown Brattleboro. It is estimated about half of Brattleboro residents are renters.

BRATTLEBORO — Brattleboro landlords could soon be barred from charging tenants a security deposit worth more than their first month’s rent, if the town’s selectboard approves a proposed ordinance.

After initially discussing it last month, the board will continue to review the proposal, which it received in August from the recently formed Tenants Union of Brattleboro, at its meeting Tuesday. If adopted, the ordinance would limit the up-front costs of a lease — which can currently include the first and last months’ rental payments and a security deposit — to the first month’s rent and a security deposit equal to the monthly rent.

If the board chooses to adopt the proposed ordinance, it will be scheduled for a first reading as soon as the board’s Oct. 20 meeting, according to a memorandum from Elwell. The proposal would also need to be approved after a second reading and public hearing on subsequent dates and would not go into effect before January 2021, at the earliest, according to Elwell.

In April, Brattleboro activists created TUB, the organization that proposed limiting the cost of security deposits after seeing low-income workers in the community lose their wages due to the COVID-19 outbreak and struggle to afford rent, according to Danielle Itin, one of its members. Itin explained that the organization, which describes itself as an “anti-capitalist, democratic collective,” does not have a central leadership structure and is composed entirely of tenants, though she noted some local homeowners and landlords support its objectives.

TUB proposed the draft ordinance to regulate lease terms on Aug. 18 because it seemed easier to enact than a rent-control program, which its members also favor, Itin said. The organization claims on its website that 60 percent of Brattleboro residents are renters, but Elwell said that figure may be closer to 50 percent.

In 2017, the median monthly rent in Windham County was $862, according to the Vermont Housing Finance Agency.

The four-sentence ordinance would prohibit landlords from requiring, as a lease condition, payment or collateral in addition to the first month’s rent and a security deposit equivalent to the monthly rent.

It would also bar tenants from using a security deposit to fulfill their last monthly rent payment, unless both the landlord and tenant agree otherwise. That would effectively prevent landlords from collecting the last month’s rent up front, Itin said.

New Hampshire, New York and Rhode Island have enacted laws restricting security deposits to the equivalent of one month’s rent, as has Burlington, Vt.

In March, residents of Barre, Vt. voted narrowly to eliminate a similar provision, which had been in place since 1994, from the city’s charter. That law remains in place, however, because the Vermont state Legislature has not yet approved the charter revision, which it must do, according to Barre’s planning director, Janet Shatney.

Itin said Barre repealed the provision because the city’s landlords gained political influence in the intervening years. She added that policies limiting the cost of security deposits have helped renters where enacted.

“It’s kept people out of houselessness,” she said. “Most people in the United States are really just one lost paycheck away, or one disturbance in their income away, from being houseless.”

Itin noted that workers are struggling to afford rent at the same time that Vermont’s housing market has become increasingly competitive due to an influx of new residents, many of whom are working remotely, during the pandemic. She said that for anyone who loses housing, the proposed ordinance would reduce a financial barrier to signing another lease.

“The cost of securing a new place to live in our town is enormous,” Itlib said. “... With first [and] last [months’ rent] and a security deposit, it largely adds up to three months’ rent.”

Ibrahim Dahlstrom-Hakki, 45, said he typically charges tenants the first and last month’s rent, as well as a security deposit equal to the monthly rent, for 18 units in Brattleboro that he either owns or co-owns. Dahlstrom-Hakki opposes the proposed ordinance because he does not believe it would address the town’s low housing supply, which he said is the main issue facing low-income workers.

He explained that without guaranteeing income through up-front costs, landlords would risk major losses if they have to navigate the costly eviction process.

“This extra [initial payment] is all we have to protect us,” Dahlstrom-Hakki said. “Going through the courts ... is a huge expense for the landlord.”

If the proposal is enacted, Dahlstrom-Hakki said landlords may demand “stricter” financial qualifications among their tenants, such as a high credit score, clean background and co-signers on the lease.

“I think I would have to do what I can to mitigate risk,” he said. “Somebody that I may have taken a chance on, I would be less likely to take a chance on because the costs of being wrong would be too high.”

Public comments from selectboard members indicate their positions on the draft ordinance may be divided.

In a Sept. 16 op-ed published in the Brattleboro Reformer, board member Brandie Starr referenced the TUB proposal in calling for the town to make its housing supply more affordable, though she did not say explicitly that she would support it.

“This [draft ordinance] allows not only young folks and families to have a better shot at living here, but also reduces the amount of move-in costs paid by grant programs aimed at those with the least income in our community,” Starr wrote.

Tim Wessel, the board’s chairman, agreed in a Sept. 30 op-ed that more affordable housing is needed. But Wessel, who owns two rental properties in Brattleboro and said he does not require tenants to pay their last month’s rent up front, noted that the proposed ordinance could, in fact, reduce housing accessibility for low-income renters.

He explained that without an assurance that tenants can cover their last month’s rent, landlords may demand higher monthly rent to offset potential losses from eviction proceedings or may approve leases only for people with financial security.

“We have already heard from several multi-unit owners that if they don’t know that the last month is prepaid, they would rely far more heavily on good credit scores and proof of savings before renting,” he wrote.

Wessel said Brattleboro should focus on creating new, attractive housing opportunities rather than placing restrictions on landlords. He pointed to the board’s efforts to invest in housing developments and expand safety inspections as ways it has assisted renters and added that the town should consider offering loans to help them afford the up-front costs of moving.

“[T]his ordinance feels like using a chainsaw to operate on a patient, when what we need here is a scalpel,” Wessel wrote. 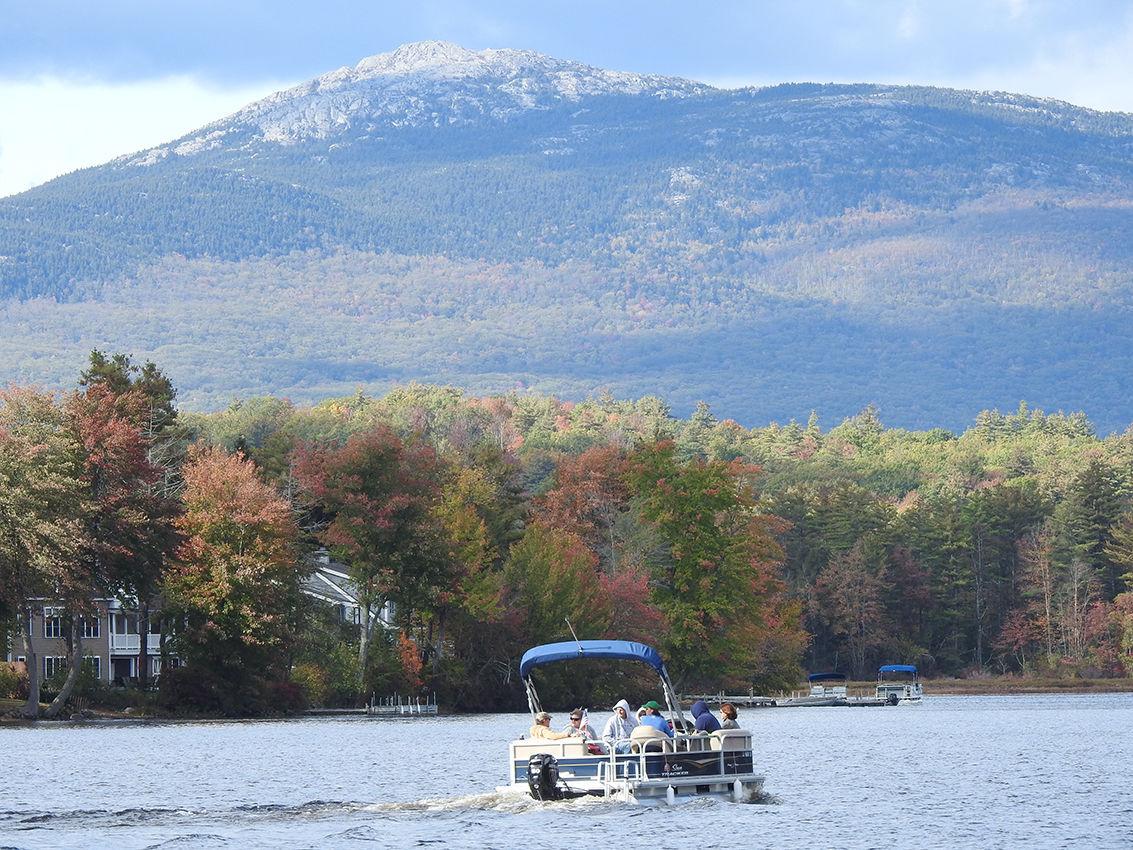 Julie Perrin, director of the Jaffrey Public Library, was named co-recipient of the Director of the Year award by the N.H. Library Trustees Association.

Two Monadnock Region librarians are sharing an award given annually to the state’s top library administrator by the N.H. Library Trustees Association.

The organization named Corinne Chronopoulos of the Peterborough Town Library and Julie Perrin of the Jaffrey Public Library as co-recipients of its Library Director of the Year award in September.

Chronopoulos and Perrin were honored Friday in separate ceremonies.

A single library administrator is traditionally named Director of the Year, but NHLTA has tapped co-recipients in three of the last five years. The award recognizes “directors who have exhibited professionalism, leadership and outstanding performance and have made notable contributions toward fulfilling the mission and goals of the library,” according to a news release from the organization.

Mary Hubbard, the assistant library director in Peterborough, said Chronopoulos led the library through a tumultuous year, when it confronted the COVID-19 pandemic and nationwide social justice movements while also preparing for an upcoming renovation project.

“What she has had to manage in the last year is pretty phenomenal,” Hubbard said. “… She has, with indomitable grace, managed an incredibly difficult situation.”

In June, the library moved its operations and collection to temporary locations in advance of a planned expansion and renovation of its permanent building on Route 202. Chronopoulos, who has served as its director since 2014, made sure the library offered Internet access to Peterborough residents for all but two hours during the week-long moving process, according to Hubbard.

Hubbard noted that Chronopoulos developed the library’s curbside pickup program after its facilities closed due to the pandemic and oversaw its reopening at limited capacity last month.

“A lot has fallen on her shoulders, and what she has created is pretty impressive,” Hubbard said.

That includes offering educational programs this year for library staff and members of its Board of Trustees on racial and social justice issues, Hubbard added. She explained that Chronopoulos has been “instrumental” in developing those internal programs as well as similar opportunities for community members, such as a book discussion group.

“Corinne has a wonderful way of intuiting what each staff member’s real strengths are,” Hubbard wrote in a letter supporting Chronopoulos’ nomination for Library Director of the Year. “She has used those strengths to diversify the library’s offerings making it more responsive to needs of the community and at the same time supporting the growth and development of her staff.”

Chronopoulos received her award from NHTLA President Katrinka Pellecchia during a ceremony Friday at the Peterborough Community Center.

John Stone, chairman of the Jaffrey Public Library’s Board of Trustees, said the board nominated Perrin for the NHTLA award because of her wisdom and ambition as the library’s director.

He explained that Perrin drafted a “pandemic policy” for the library even before the coronavirus outbreak began to pose a serious threat to local communities. That plan, which the library subsequently implemented and shared with other libraries across the state, included a curbside pickup program and other measures to continue offering library services while protecting Jaffrey residents, Stone explained.

“She doesn’t like to leave things until [the last minute],” he said. “She thought it through in advance … Julie made it so that the library was still open, but open either virtually or outside.”

Stone, who previously served on the library’s Board of Trustees in the 1980s and 1990s, added that Perrin has expanded educational opportunities for adults and children. In particular, he said the library’s acquisition of multiple grants worth a combined $30,000 has allowed it to upgrade learning facilities and purchase science equipment.

“She has taken the library and turned it around to make it a friendly atmosphere, where everyone’s … treated the same when they come in, whether you are a 3-year-old child or you’re a 90-year-old person,” he said. “Everyone is treated with respect.”

Perrin deflected credit for the Director of the Year award, instead saying the award recognizes the “town’s commitment to lifelong learning for its residents.”

“I am honored to receive this award, but as I have said many times, this is an honor for all of Jaffrey,” she told The Sentinel in an email. “I have a relentless passion for and commitment to the library’s mission of lifelong learning, but my job is to ignite that same passion and commitment in others — staff, trustees, town government, and the entire community.”

Stone said Perrin was honored in a celebration Friday that was attended remotely by about 50 people. He will present Perrin with her award in a private ceremony Tuesday.