Patty Meyer, director of the Chamber Singers of Keene, conducts choral members Tuesday evening at St. James Episcopal Church in Keene during one of their final rehearsals before their 25th annual concert Friday.

Chamber Singers of Keene members practice Tuesday evening at St. James Episcopal Church in Keene during one of their final rehearsals before their 25th annual concert Friday.

The Chamber Singers of Keene will perform their 25th annual concert Friday, after it was postponed last month due to the sudden death of the director's daughter.

Pooja Meyer, 19, died in a car crash in Searsburg, Vt., on Dec. 8, according to Vermont State Police.

Pooja, of Guilford, Vt., was born near Delhi, India, and was adopted by Chamber Singers Director Patty Meyer and her husband Chris Meyer in 2009, according to her obituary. A graduate of Brattleboro Union High School, she had a passion for photography, the obituary states, and was described as resilient and joyful.

Following the tragedy, the Chamber Singers canceled their Dec. 13 concert out of respect for Patty Meyer and refunded all the pre-sold tickets.

Ryan Owens, president of the Chamber Singers' board of directors, said it's "gratifying" the group is still able to perform.

"The opportunity to come together as a group, especially for our director, Patty, is really quite special," he said.

The Chamber Singers of Keene is an auditioned vocal ensemble of 20 members in the Monadnock Region dedicated to performing choral music from the Renaissance through the contemporary era, according to its website.

Meyer has been the group's director since 2018 and is also a music teacher in Brattleboro. In addition to singing, the website says she plays the piano and flute.

Owens said the rescheduled concert is free to the public, with donations accepted at the door.

"It was fairly last-minute that we rescheduled and got it back on track, so we decided to dispense the ticket logistics," he said.

The group will perform some of its favorite pieces from the past 25 years, including Marc-Antoine Charpentier's "Midnight Mass for Christmas" and Francesco Durante's "Magnificat."

Singers will be accompanied by violins, viola, cello and organ. The string players are performers in orchestra and chamber ensembles in the Brattleboro area and the Pioneer Valley of Massachusetts. The organist is from Winchester.

The concert will be held at St. James Episcopal Church, at 44 West St. in Keene, at 7 p.m. 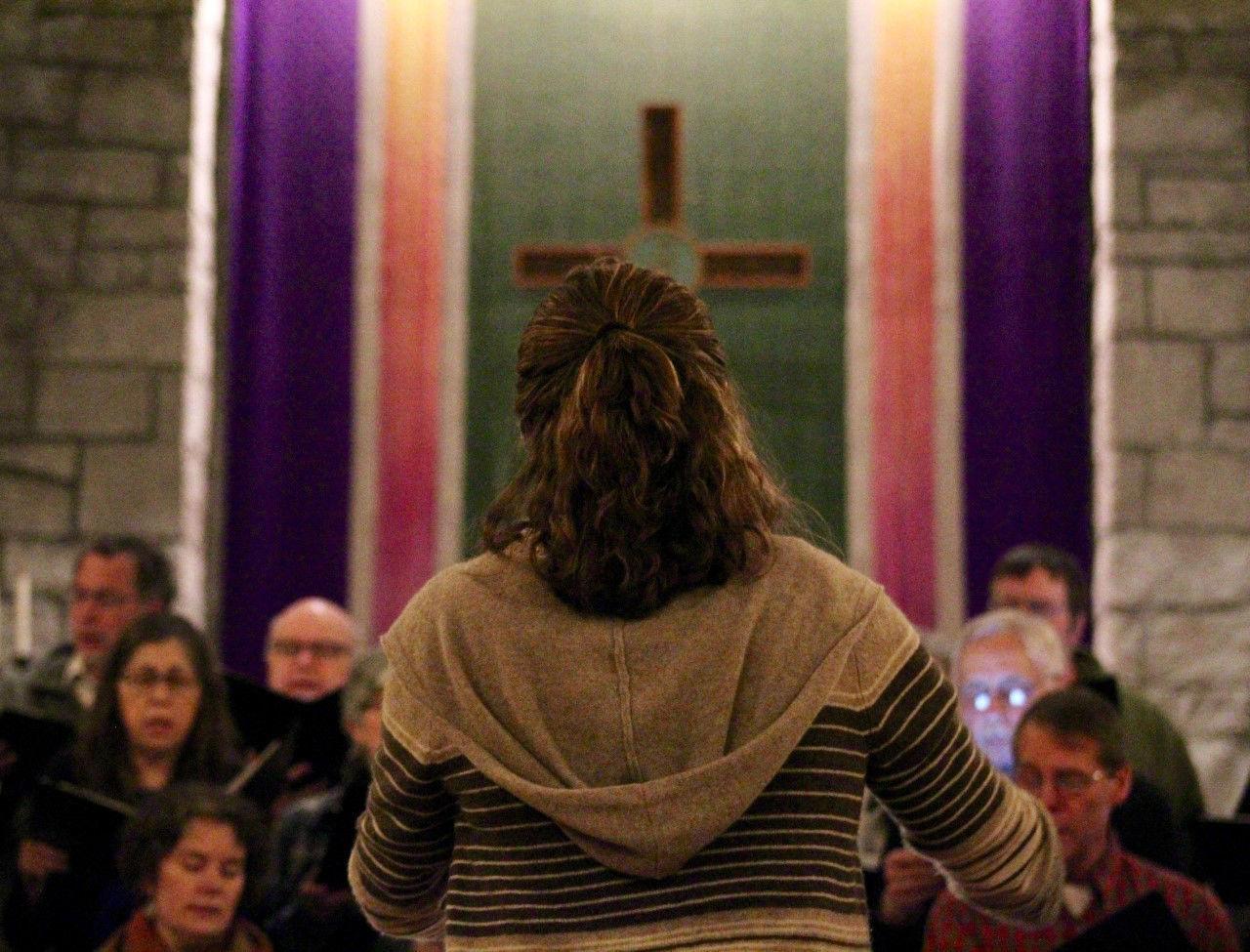 Patty Meyer, director of the Chamber Singers of Keene, conducts choral members Tuesday evening at St. James Episcopal Church in Keene during one of their final rehearsals before their 25th annual concert Friday.

House Bill 1664 would set ambitious goals for lowering greenhouse gas emissions statewide, looking to get 50 percent below 1990 levels by 2030 and 90 percent by 2050. It would also push state agencies and contractors to reduce their own carbon emissions, Thompson said.

In addition, it would establish a standardized measurement system for greenhouse emissions for the state writ large and create an oversight commission on environmental services.

Thompson’s bill would also establish an “Office of the Environmental Advocate,” which would carry out the bulk of the specific measures to be taken.

That office would also determine what statewide emissions were in 1990.

As the co-owner of the Mayfair Farm in Harrisville, Thompson said he’s seen the impact of climate change on his crops.

“Last winter, we had extreme variations in temperature, just like we’ve had this winter,” he said. “When that happens, you get something like we had with a five-acre hay field that was essentially completely killed off.”

Reseeding the field is always an option, Thompson added, but this winter has not given him much confidence in much of a rebound.

Thompson pointed to a general lack of a climate-change strategy in the Legislature as the primary problem HB 1664 would address. He recalled being asked by a constituent what the Democrats’ overarching plan even is.

“And then you start to look around and realize that as a state, we don’t have [a climate-change strategy],” Thompson said. “... The fact that we’re up for re-election every two years really limits our ability as a state to do any long-term planning.”

Along with setting high goals, the bill intentionally leaves wiggle room on the specifics, Thompson said, in order to get a consensus from lawmakers and the public.

After a period of public comment ending by July 2021, the state would set rules relating to the 2030 and 2050 minimum targets.

It would be up to the Office of the Environmental Advocate to come up with a plan to hit those benchmarks, following another public comment period ending in July 2022.

The bill text offers guidelines for what that could include, such as “offering market-based incentives; expanding financing and investment tools; modernizing the electrical grid, regulation and rates; improving incentives for combined heat and power systems; expanding the renewable energy standard and procurement,” among other things.

“... [T]his approach to legislation allows us to actually get this very large ship of the New Hampshire state pointed in the right direction,” Thompson said.

The bill would require several new staff positions to be created, according to a fiscal analysis appended to the bill.

The bill is currently being considered by the House Science, Technology and Energy Committee. If approved, it would head to the floor for a vote.

Thompson is also running for the Executive Council seat being opened up by Andru Volinsky’s run for governor.