The administration building on the Brattleboro Retreat’s campus, as seen in a file photo from July.

BRATTLEBORO — In a scathing statement this weekend about his decision to deny the Brattleboro Retreat additional state aid, a Vermont official said the retreat’s board is pursuing sale or closure.

Retreat CEO and President Louis Josephson said the mental health and substance-use treatment center is “exploring options,” which could also include scaling down.

In his statement, emailed Sunday afternoon, Human Services Secretary Mike Smith detailed financial troubles at the Retreat and the state’s history of stepping in, which he said informed his decision to deny the Retreat’s request last week for an additional $2 million in funding.

But Josephson told The Sentinel Sunday that no dollar amount was discussed in a Dec. 30 meeting with Smith and his team. Josephson added he and other Retreat representatives presented the organization’s financial situation and suggested a handful of ways the state could help, which Smith turned down.

In his statement, Smith said any additional funding would be on top of a recent financial package — valued at $16 million — that includes the construction and ongoing operation costs of 12 new beds.

Smith said the Retreat cited a lower number of patients than expected when it asked for more state aid, noting in his statement that similar facilities in Vermont aren’t experiencing such declines.

Josephson said facilities in different regions face unique challenges, and fluctuations in patient counts can be due to a variety of reasons.

“I don’t appreciate the innuendo that there’s some reason why we’re not busier,” he said.

As for why he declined additional help to the Retreat, Smith pointed to a lack of significant management or operational changes, which he asserted are necessary to save the retreat and its jobs. It’s also unclear, he said, how the organization will pay the more than $1 million in taxes Smith said are owed to the state.

Josephson asked for any evidence of the leadership’s incompetence, instead blaming the retreat’s financial situation partially on seven years spent without a Medicaid rate increase. Calling the secretary’s allegations “soundbites,” Josephson noted the organization cut $2 million in spending last year and plans to lop another $1.9 million in overhead costs in 2020.

But it’s true that the Retreat is in a stressful financial position, he said. The organization operated at a $439,000 loss in 2016 and ended 2017 in the red by nearly $2.5 million, according to 990 tax information reported to the IRS.

The Retreat’s board of trustees met Friday morning and instructed Josephson to explore options for the organization’s future, which include scaling back operations, selling the facility or shutting it down. Josephson sent a letter the same day informing Smith and Vermont Gov. Phil Scott of the board’s directions and the potential impact on the state, given the breadth of the Retreat’s services.

Though Josephson said Sunday that the board was optimistic, he wrote in his letter to the state officials that he was told to “plan for the sale or closure of the Retreat in the very near future.”

“In consultation with the Board of Trustees, we are exploring every avenue to change the Retreat’s unsustainable business model and reimbursement but no matter what the outcome, the Retreat, if it exists at all will be a very different organization in the future,” Josephson states later in the letter.

When reached by phone Sunday, board member Kenneth Becker referred questions to Josephson.

Noting his receipt of the letter, Smith faulted those at the helm of the organization.

“Make no mistake, any threat of closure is both the decision and the result of the Retreat’s current leadership,” he said. “... Despite the investment of millions of state dollars Retreat management has failed to deliver fiscal stability to the institution.”

He said he’s meeting with the Retreat this week. Despite the strain such a closure would put on the mental health system, as well as the fiscal impact in the Brattleboro area, Smith said continuously turning to taxpayers is not a viable solution.

But Josephson countered that. Without his organization, the state would have to either pay to care for the Retreat’s patients at the Vermont Psychiatric Care Hospital or contract with a private facility. Regardless, he said caring for people costs money, and he asserted that it wouldn’t take “tens of millions to stabilize” the Retreat.

The Brattleboro Retreat employs 840 full- and part-time workers, according to Josephson, and serves about 5,400 people per year across all its programs, including 2,500 in inpatient care. Founded in 1834, the Retreat is the closest facility for Monadnock Region residents for inpatient mental health services. Cheshire Medical Center in Keene closed its psychiatry unit in mid-2016, citing a lack of staffing. 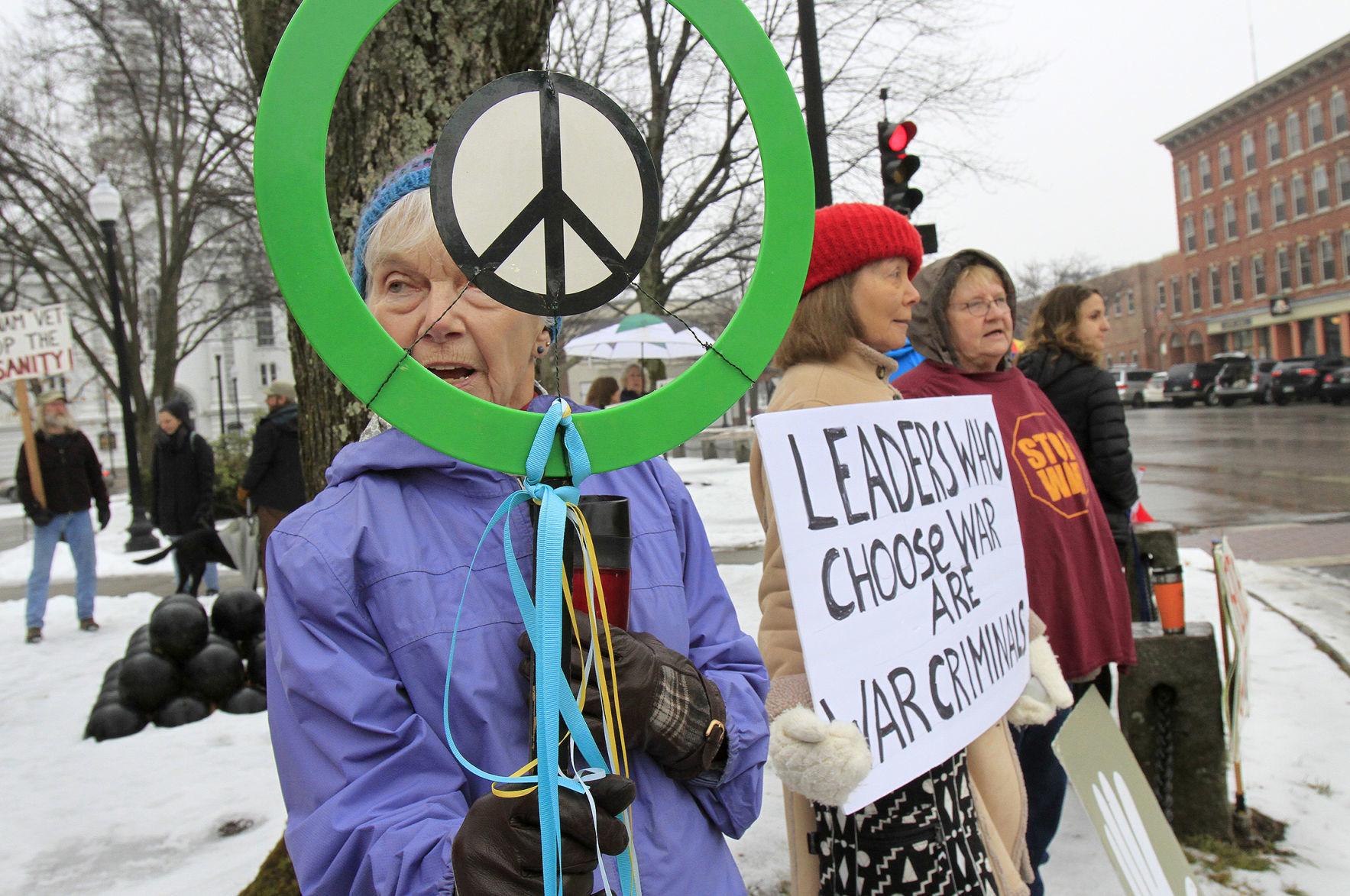 Deb Wilson of Keene joins the No War With Iran rally, organized by the Monadnock Progressive Alliance, on the Central Square common in Keene Saturday morning.

Cory Watkins and Andrea Walkonen wed on New Year’s Eve at Elm City Church. But first, they had to get through their rehearsal dinner.

In a wedding couple’s literal hour of need, a Keene restaurant stepped up to the challenge and provided a last-minute venue for their rehearsal dinner.

When Cory Watkins and Andrea Walkonen were planning their proverbial perfect day for New Year’s Eve, they couldn’t have forecast the snow and ice storm that shuttered some restaurants the night before, including the one slated to host their rehearsal dinner. But Albie Powers — the couple’s friend, officiant and pastor at Elm City Church — assured them he’d find a solution.

“I was walking down Main Street, and I saw this side room in Luca’s [Mediterranean Cafe] was open, and this was after 6,” Powers said.

So he approached the owner, Luca Paris, and explained the couple’s predicament: 30-plus guests for a rehearsal dinner at 7 p.m. Powers said Paris didn’t hesitate.

“If you think about what my job is,” the restaurateur said, “it’s only about making people happy.”

Paris rallied his staff and called in an employee who had just gone home. In less than an hour, the room was arranged with extra tables and chairs to accommodate the guests, and Paris had printed custom menus with the couple’s names.

“The little things that don’t take a lot of time are what I hope make memories that last forever,” he said.

Powers said nothing about that evening felt like it was thrown together at the last minute: “Everyone was thrilled, and it definitely saved the day when it came to the rehearsal.”

The Watkinses agreed the dinner turned out far better than they could have imagined. By pure coincidence, Paris included on the menu balsamic salmon, the couple’s favorite dish. Paris called it evidence the evening was destined to be as it was.

Andrea and Cory met online eight months ago and said they “knew within four days” that they would get hitched. Cory lived in Oklahoma, though, so their long-distance relationship involved plenty of travel between the two states. He moved to Keene to live with Andrea in late October, and they married New Year’s Eve at Elm City Church.

They’re grateful to the community in Keene, with places like Luca’s and friends like Powers, who they credit for handling the rehearsal-dinner scramble with ease.

“When [Powers] said he had it taken care of, the both of us had no doubt,” Andrea said.

Paris lauded the pastor, too, for going above and beyond to find a solution for the couple. Likening them to a sports team, he also thanked his staff for stepping up to make the evening special without questioning or balking at the difficulty of the task.

“It goes to show you what this town feels like,” Paris said. “It was like one of those perfect holiday stories.”