In a 2018 video recently made public when it was posted online, Keene’s then-mayor appears to make a connection between race and crime.

“I have theories about why New Hampshire is particularly safe,” says Kendall W. Lane, who wrapped up an eight-year stint as mayor in December, in the short documentary “Young Guns” before pausing for several seconds. “Which, and unfortunately they cut both ways, and part of the reason that New Hampshire is so safe is because, quite honestly, the state is 98 percent white. The state is very homogeneous. There’s not a lot of diversity in New Hampshire.”

In an interview Wednesday, Lane denied that he linked race and crime, instead accusing filmmaker Reece Dunn of editing his statements grossly out of context. Rather than addressing race, he said, he instead pointed to the difference between rural and urban communities.

“The fact that New Hampshire is 98 percent white has absolutely nothing to do with whether there’s gun violence or not,” Lane said Wednesday. “Gun violence is a disease that affects states across the country, and it affects New Hampshire as well.”

Lane also pointed to his record of embracing diversity as a public servant; aside from serving as mayor, he was a city councilor from 1986 to 1993 and again from 2007 to 2011.

Although the 12-minute video was posted to YouTube in December, it was filmed nearly two years ago — at the top of Lane’s fourth mayoral term — by Dunn, a student from England who spent the semester at Keene State College. Dunn recorded the interview in Lane’s office at City Hall and submitted the final product, which he calls an exploration of American culture surrounding guns, for a class assignment.

The film also includes an interview with what he refers to as a “gun enthusiast” whose identity is withheld, and conversations with multiple Keene State students and professors.

Since being posted to YouTube, the documentary had gotten just over 80 views as of Thursday evening. The libertarian-leaning activist group Free Keene, however, created an edited version of the film that highlights Lane’s comments and shared it in a Christmas Day blog post. That group’s YouTube video has been viewed more than 600 times.

Raw footage of the interview obtained from Dunn shows that Lane’s statements in the film came after the student asked him why he thought a state with relaxed gun laws had such low crime rates, though Lane disputes that this was the student’s question. That footage continues from the clip in the documentary regarding the state’s homogeneity: “... So the type of conflicts that you will get in an urban area resulting from the diversity don’t happen in Keene, don’t happen in New Hampshire.”

The Sentinel also received a second clip of raw footage from Dunn’s conversation with Lane, in which the mayor appears to continue to discuss the state and city’s demographics:

Lane said Wednesday that he was referring to racism when he mentioned conflicts in bigger cities, not crime.

“I mean, I thought that making the community more diverse had the potential of creating racism, that we needed to prepare the community so that that didn’t happen. That’s really always been the concern,” he told The Sentinel of his time in office.

“... Racism is a horrible experience that, to the extent that we have the ability to educate people and to expose people to different cultures and different backgrounds ahead of time, that’s a positive thing that we should work toward. It had nothing to do with crime.”

Over the course of his eight years as mayor, Lane encouraged diversity in Keene from his bully pulpit. Last year, he championed a proposal to rename the Martin Luther King Jr./Jonathan Daniels Committee to the Human Rights Committee and expand its duties. The committee is now charged with promoting social justice, nonviolence, equity, diversity, inclusion and multiculturalism through educational programs, community service and public events.

During his tenure, he also oversaw “Keene on Diversity,” a series of community conversations hosted by the College City Commission; publicly rebuked allegations of race-based harassment against minority college students in the city; and spearheaded the first Monadnock Fall Festival in 2016, which focused on celebrating diversity.

He accused Dunn of interviewing him under false pretenses. Out of a long, free-wheeling conversation about the city and state, Lane said, a few sentences were edited out and used in the film. He added that he didn’t know Dunn was making a documentary about guns.

Dunn confirmed in a Thursday email to The Sentinel that he did not tell Lane the documentary’s subject, which he said was “pretty vague” when they met. In his initial email requesting an interview with the mayor (which The Sentinel reviewed), Dunn did not say he was a Keene State student or that he was making a documentary.

Dunn wrote that he and Lane spoke for about an hour and discussed the state and city’s population, crime, gun control, road planning and other topics. After reviewing the footage, Dunn said he decided to focus on gun culture and used that portion of the interview.

In early May 2018, Dunn emailed Helen K. Mattson, the mayor’s executive assistant, and asked for a release from the mayor. Mattson replied later the same day that Lane said “to let you know that he is fine with it.” At that point, according to Dunn, Lane had not seen the documentary.

Former New Hampshire Gov. John Lynch chats with Bill Macduff of Peterborough on Thursday. Lynch was at a home in Peterborough, in one of a slew of stops across the state in support of Joe Biden’s campaign for president.

“I think what’s going to happen with Joe Biden is he’s going to restore a sense of order and stability to the world, which is clearly what is needed. I trust that Joe Biden is going to unite us as a country,” Lynch told the nine people, mostly older area residents, gathered mid-morning in the home of Janine and Rick Lesser.

Central to Lynch’s argument, which he’s making across the state in a five-day “Live Free, Vote Joe” tour, was the claim that Biden can pull together a cross-aisle coalition to defeat Trump in the general election.

“He can appeal to the more moderate Republicans who don’t like the current occupant of the White House,” said Lynch, who served in Concord’s corner office from 2005 to 2013 and endorsed Biden on the first day of his campaign last April.

Many strong Biden supporters in the group Thursday based their support in a belief in Biden’s electability.

“He has more of a centralist, moderate mindset that can bring the country together at a time when we’re so divided and it’s uncomfortable to talk to family and friends about politics,” said Cheryl Seifert, who is in her 50s and originally backed U.S. Sen. Cory Booker, but said she turned her support toward Biden after the Garden Stater dropped out earlier this month.

Several argued Biden can not only win the election, but also has the experience to govern effectively once in office.

“You have to look at people’s record and what they’ve done, not just what they say,” said host Janine Lesser, 67, citing Biden’s positions as head of several high-profile committees when he was a U.S. senator from Delaware and his help in working across the aisle to pass the Affordable Care Act.

After Thursday’s house party, Lynch was scheduled to head to Franklin Pierce to participate in the Rindge university’s Pizza & Politics series before continuing to an event in Claremont.

In introducing Lynch at her home, Lesser — a former employee of the state Department of Health and Human Services — called on the attendees to vote Biden.

“A lot of people seem to be getting enthralled by shiny objects in the environment, but I think Joe is the real thing,” she said.

Most supporters at the event also spoke of Biden’s “character” as a salve that could heal the country’s wounds.

“He’s the right person to bring compassion back to the country, which we’ve lost,” said Michael Desmarais, 52, a sales manager from Peterborough.

For Gene Faltus, a Swanzey resident and former Republican who has terminal cancer, the kindness he said Biden showed him at a Keene event over the summer solidified his support for him.

Faltus added he’s grateful for Biden’s leadership of the Cancer Moonshot initiative, which was inspired in part by the illness of Biden’s son Beau, who died of brain cancer in 2015.

“Joe Biden has personally reached out to me, and the campaign has embraced me and given me strength and purpose to carry on,” said Faltus, 67, a retired radio broadcast engineer, who said he’s knocked on 554 doors for the candidate since Jan. 1.

Not all in the group were sold on Biden, however, including Janine’s husband, Rick, 69, who said he’s concerned Biden’s candidacy would be tarred in the general election by the Ukraine controversy involving Biden’s son, Hunter, which is at the center of the impeachment trial in the Senate.

In August, a whistleblower alleged Trump used the powers of his office to pressure Ukraine to announce an investigation into a theory that Joe Biden, while vice president, called for the firing of a Ukrainian prosecutor who was investigating the head of a Ukrainian company of which Hunter Biden was a board member. There is no evidence Hunter was ever under investigation.

At this point, Rick said he plans to write in Michael Bloomberg, whom he said has strong management skills from his time revitalizing New York City as mayor.

Recounting his answer to state residents who ask what a Biden presidency would mean to the people of New Hampshire, Lynch said he returns to the basic desire for a more stable president who does not send out late-night tweets and spur disconcerting news stories.

“It means we can go to bed at night and have a good night’s sleep and not worry about what’s going to be in front of us first thing in the morning,” Lynch said. 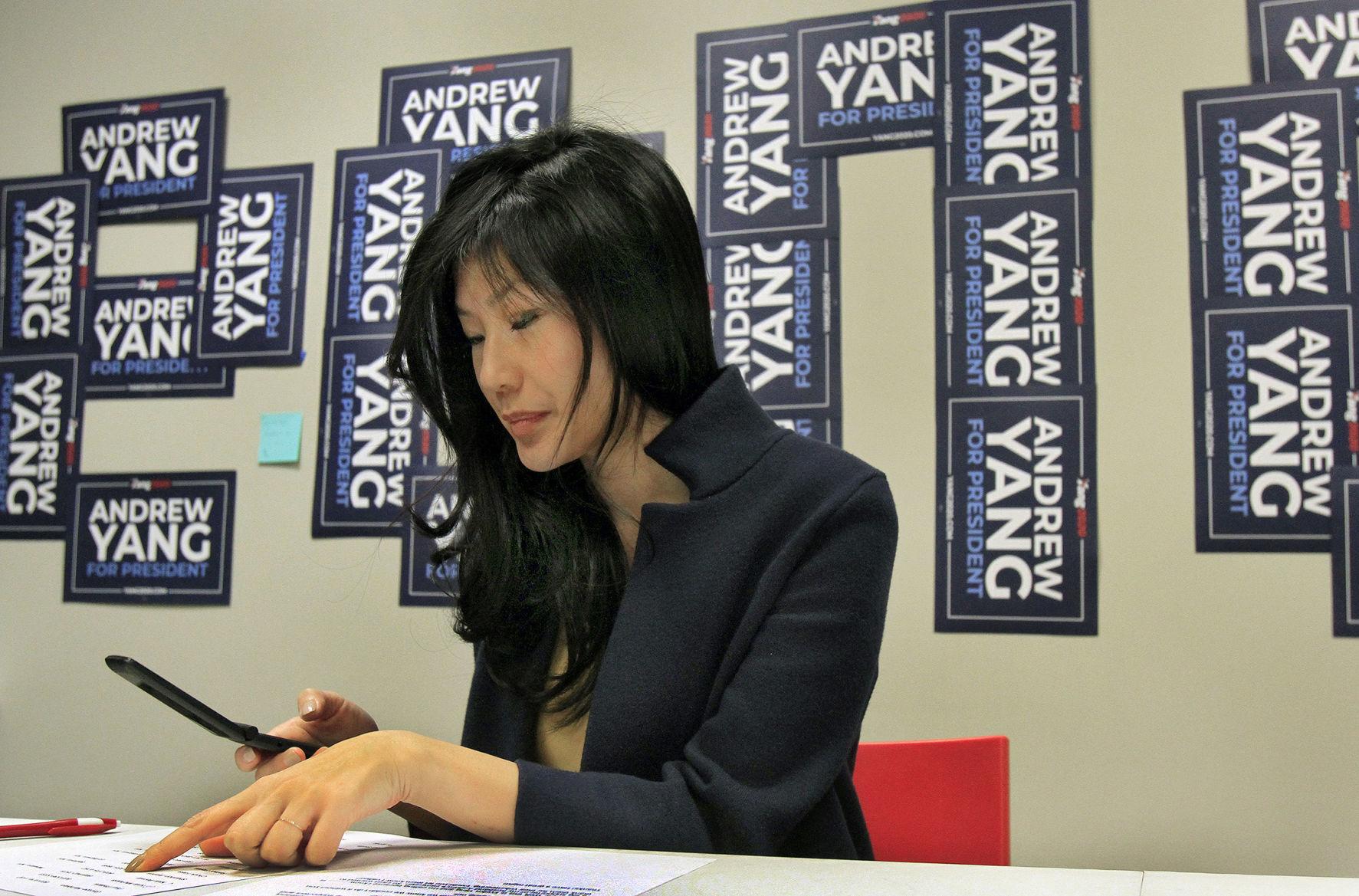