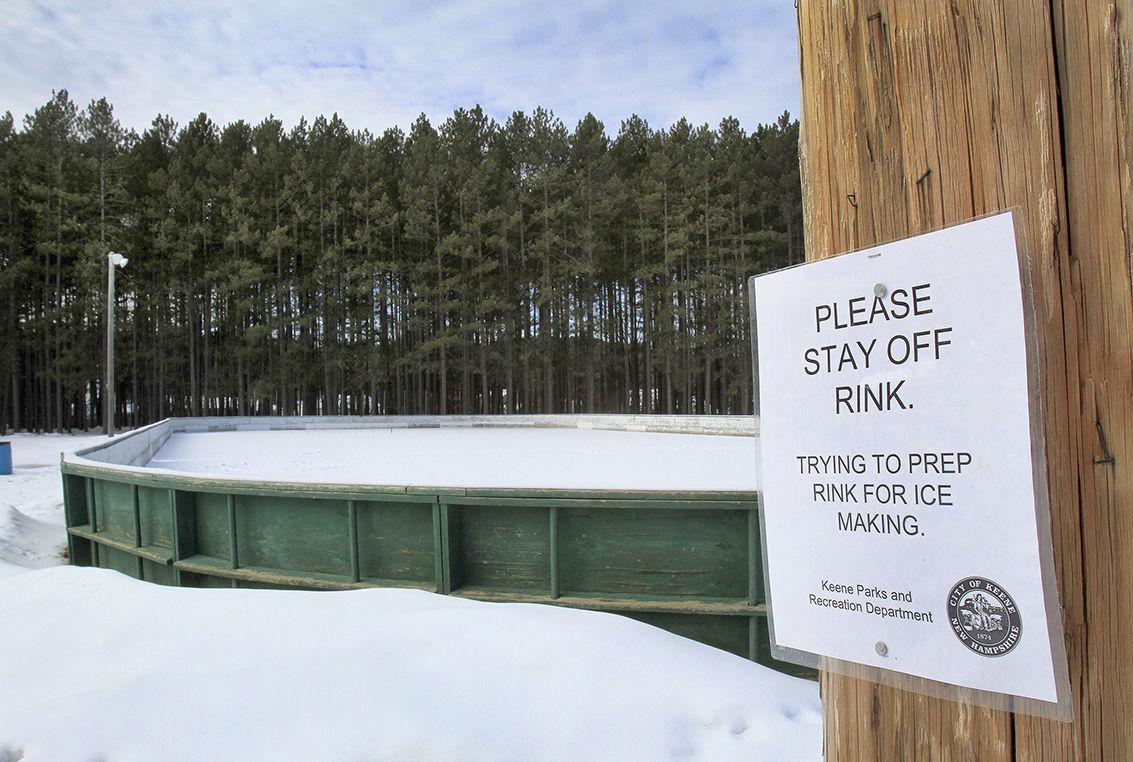 The Keene Parks and Recreation Department has posted signs around the Wheelock Park rink asking people to stay off it until they’ve finished the ice-making process. The department is waiting for a good stretch of cold weather before skating will be allowed at the public skating areas at Wheelock and Robin Hood parks.

When Cindy Copeland was a 7th-grader in the early 1970s, her main focus was avoiding bullies. Because she lacked the elephant bell pants and excess blue eyeshadow needed to fit in, keeping her head low became routine.

But Copeland’s English teacher in Litchfield, Conn., Mrs. Schulz, saw her potential and encouraged her to become a writer. To help build her confidence, she landed Copeland an internship with a local female journalist.

The memoir, which hit shelves Tuesday, will be presented at Toadstool Bookshops, at 12 Emerald St. in Keene, Saturday at 2 p.m. A ‘70s-themed photo booth, hippie costumes and tie-dyed cookies will be featured at the kid-friendly event, according to the bookstore’s website.

The graphic novel follows Cindy through the quirky, timeless themes of navigating middle school, while she simultaneously learns how to write a lede, respectfully question authority and assert herself in what was a man’s world. And, being only 12, there’s a fair share of mistakes along the way.

On Wednesday, Copeland recalled her first assignment for the Torrington Register — now known as the Register Citizen — with her mentor, the late Leslie Jacobs. Reporter’s notebook and pen in hand, she started taking notes at a school’s finance committee meeting.

“I honestly didn’t understand anything,” Copeland, 59, said. “There is a kind of funny drawing in the book where I’m trying to make notes for myself, when I clearly have no idea what’s happening.”

Though she jokingly admitted a majority of the meetings afterward didn’t get any less confusing, the three-year internship led her to want a career in political journalism.

She graduated from Smith College in Northampton, Mass., as a government major and, shortly after, worked at a few small Boston newspapers. But, when she had her first of three children in her late 20s, she realized she wanted a change of pace.

“I wanted to be able to work from home, so it was an easy move to writing books,” she said. “I really needed the benefit of writing something and setting it aside, but of course with newspapers, you do not have that luxury.”

“Cub” is now Copeland’s 28th publication and second graphic memoir. And while she often draws on personal experience, most of her books aren’t autobiographical.

But Copeland said this part of her life was important to share fully.

“The cub reporter piece was very unique and interesting for kids to read,” she said, “with a 12-year-old trying to learn the craft of reporting in an adult world.”

“I wanted to lift up journalists and journalism, and I thought it was important to tell kids that the free press is part of our democracy, good journalism matters and it takes time,” Copeland added.

Copeland said she hopes the memoir serves as a reminder for kids that the issues they face now will get easier.

“Now, more than ever, when kids are pulled into social issues almost constantly because of social media,” she said, “I think it’s more important than ever to have outside interests that remind you the world is bigger than your 7th-grade hallway.”

The cancer death rate in the United States fell 2.2 percent in 2017 — the biggest single-year drop ever reported — propelled by gains against lung cancer, the American Cancer Society said Wednesday.

Declines in the mortality rate for lung cancer have accelerated in recent years in response to new treatments and falling smoking rates, said Rebecca Siegel, lead author of Cancer Statistics 2020, the latest edition of the organization’s annual report on cancer trends.

The improvement in 2017, the most recent year for which data is available, is part of a long-term drop in cancer mortality that reflects, to a large extent, the smoking downturn. Since peaking in 1991, the cancer death rate has fallen 29 percent, which translates into 2.9 million fewer deaths.

Norman Sharpless, director of the National Cancer Institute, which was not involved in the report, said the data reinforces that “we are making steady progress” on cancer. For lung cancer, he pointed to new immunotherapy treatments and so-called targeted therapies that stop the action of molecules key to cancer growth. He predicted that the mortality rate would continue to fall “as we get better at using these therapies.” Multiple clinical trials are exploring how to combine the new approaches with older ones, such as chemotherapy.

Sharpless expressed concern, however, that progress against cancer would be undermined by increased obesity, which is a risk factor for several malignancies.

The cancer society report projected 1.8 million new cases of cancer in the United States this year and more than 606,000 deaths. Nationally, cancer is the second-leading cause of death, after heart disease, in both men and women. It is the No. 1 cause in many states, and among Hispanic and Asian Americans and people younger than 80, the report said.

The cancer death rate is defined as deaths per 100,000 people. The cancer society has been reporting the rate since 1930.

Because lung cancer is the leading cause of cancer deaths, accounting for 1 in 4, any change in the mortality rate has a large effect on the overall cancer death rate, Siegel noted.

She described the gains against lung cancer, and against another often deadly cancer, melanoma, as “exciting.” But, she added, “the news this year is mixed” because of slower progress against colorectal, breast and prostate cancers. Those cancers often can be detected early by screening, she said.

The report said substantial racial and geographic disparities remain for highly preventable cancers, such as cervical cancer, and called for “the equitable application” of cancer control measures.

The five-year survival rate for all cancers diagnosed from 2009 through 2015 was 67 percent overall — 68 percent for whites and 62 percent for African Americans.

In recent years, melanoma has showed the biggest mortality-rate drop of any cancer. That’s largely a result of breakthrough treatments such as immunotherapy, which unleashes the patient’s own immune system to fight the cancer and was approved for advanced melanoma in 2011.

The one-year survival rate for patients with advanced melanoma rose from 42 percent in the 2008-2010 period to 55 percent between 2013 and 2015, according to the report. Also striking, Siegel said: Among those 65 and older, the melanoma death rate has been dropping 5 percent to 6 percent annually in recent years after decades of increases.

Meanwhile, lung cancer death rates have dropped by 51 percent since 1990 in men, and by 26 percent since 2002 in women, with the most rapid progress in recent years. For men, the decline in the death rate sped up from 3 percent per year during the 2008-2013 period to 5 percent annually for the following five-year period. For women, the decrease accelerated from 2 to almost 4 percent.

Siegel noted that most lung cancer cases are diagnosed at an advanced stage — which is what the new therapies are designed to treat.

The percentage of adults in the United States who smoke has been dropping for decades, according to the Centers for Disease Control and Prevention. Between 2005 and 2018, for example, the proportion fell from almost 21 percent to 13.7 percent.

The report said a slight rise in breast cancer incidence rates since 2004 — about 0.3 percent per year — is partly the result of fertility rate declines and increased obesity. Those factors also may be contributing to an increase in uterine cancer. The cancer society also said survival has improved since the mid-1970s for all of the most common cancers except cervical and uterine cancers. In those cases, treatment breakthroughs for advanced disease have not materialized.

The article appears online in CA: A Cancer Journal for Clinicians, a peer-reviewed medical journal published for the American Cancer Society.