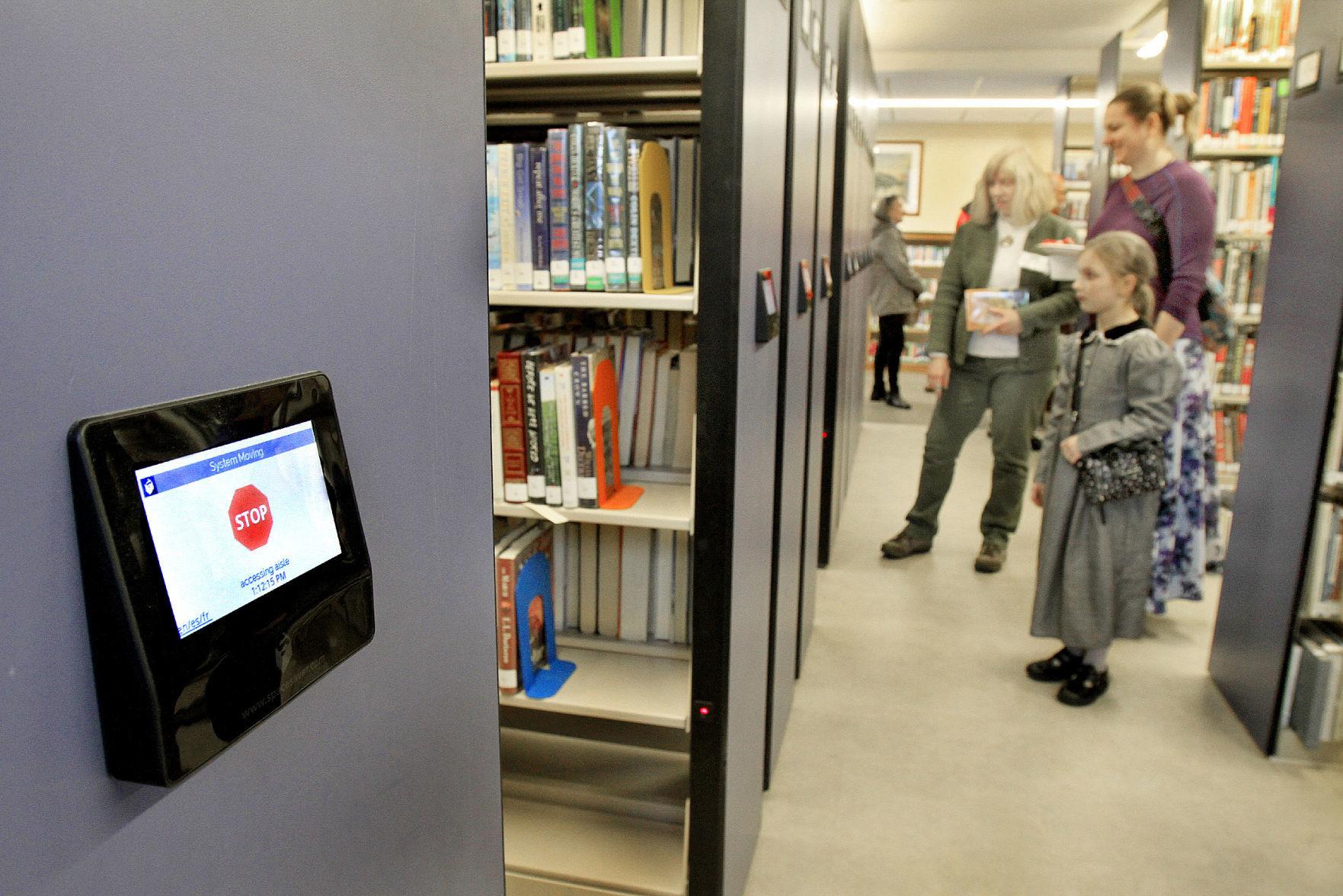 Visitors admire the electronically movable stacks at the expanded Bridge Memorial Library in Walpole during an open house Saturday. Construction for the donation-funded renovations began in May, with the library’s materials moved temporarily into the town hall for public access. The facility reopened in mid-December with three new areas: the John and Carol Hubbard Community Room, the Ken Burns Reading Room and the Pam Howard Reading Corner. 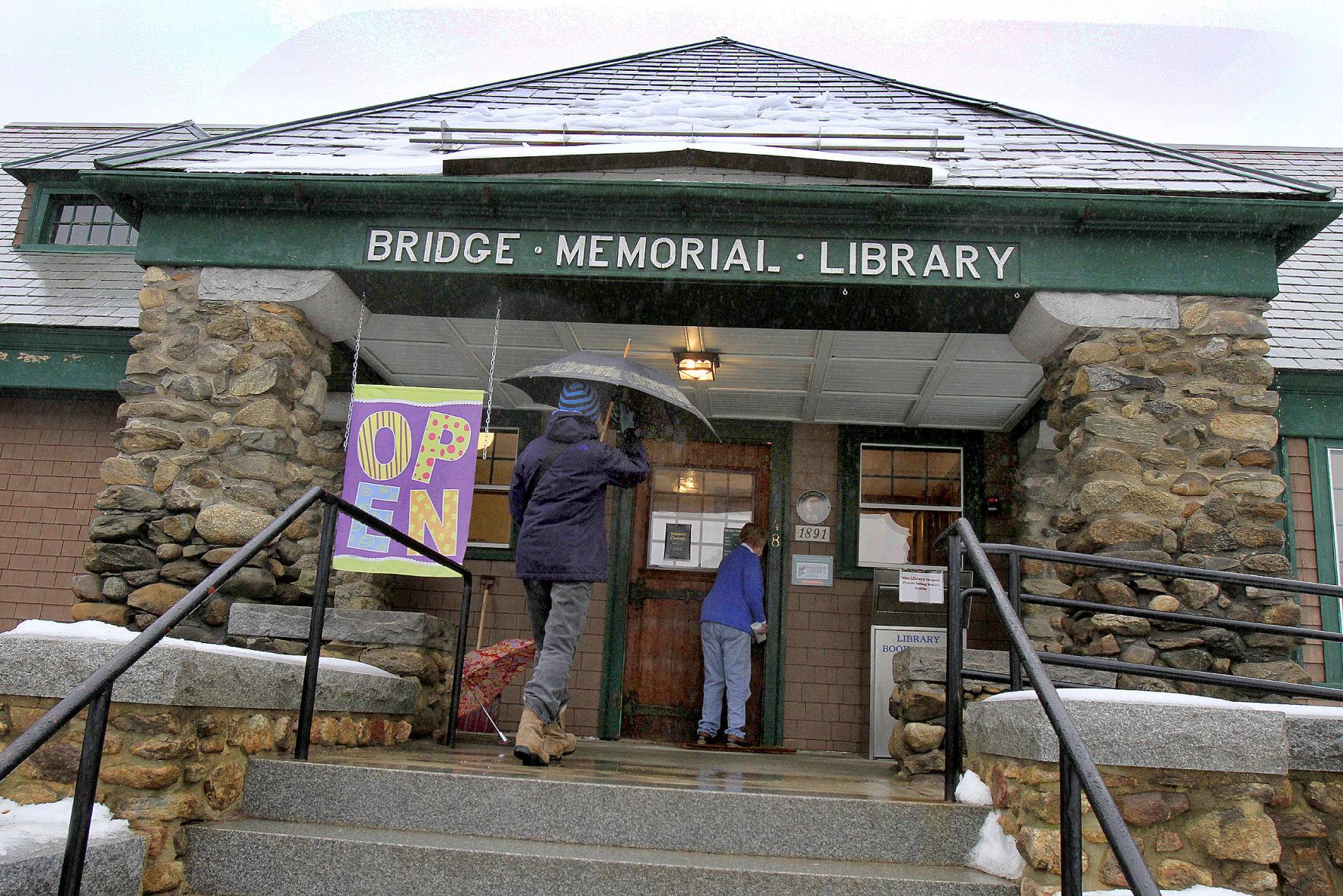 Visitors arrive at the Bridge Memorial Library in Walpole Saturday for an open house following a renovation and expansion project.

Residents and town officials for and against a proposed zoning amendment waved signs outside the polls in May.

From left, Peterborough residents Denise Zimmer; Ivy Vann, vice chairwoman of the town’s planning board; and Carol Kraus wave signs against proposed Zoning Amendment 15 outside the polls at the Peterborough Community Center in May 2019.

PETERBOROUGH — Two lawsuits related to an unsuccessful zoning amendment have been resolved with the invalidation of an overlay district that had allowed greater density in certain residential areas.

The legal dispute between the town and a group of residents grew out of a procedural fracas over Zoning Amendment 15, which failed at the polls last May. A resident-submitted proposal, it would have repealed one overlay zone — Traditional Neighborhood Overlay Zone II, or TNOZ II — and made changes to another, known as TNOZ I.

The parties agreed late last month to drop both lawsuits. The agreement hinged on a judge invalidating TNOZ II on the grounds that the town did not adequately notice a public hearing before voters approved the overlay zone in 2017. The town acknowledged that failure in a consent decree approved Dec. 27 by Hillsborough County Superior Court Judge N. William Delker.

Effectively, that means that Amendment 15 supporters achieved one objective — rolling back TNOZ II — but not the changes to TNOZ I they desired.

“My clients got half a loaf, and the town kept half a loaf,” said Mark Fernald, the attorney representing the group of residents. He said they hope to engage the Peterborough Planning Board in a “productive discussion” about resolving their concerns with TNOZ I.

The ruling does not affect any projects the planning board approved while TNOZ II was still in effect, according to Chairman Dario Carrara.

Ivy Vann, vice chairwoman of the planning board, expressed frustration at the outcome. She said the planning board developed the two overlay zones to encourage greater density in parts of town that already have water and sewer, while preventing development pressures in the most rural areas.

“Towns need to become appropriately dense in the parts of town that already have infrastructure,” she said. Otherwise, their property tax revenues can’t keep up with the cost of municipal services, leading them to “go broke.”

But some town residents worry the measures could change the town’s character.

“If it’s changed dramatically by over-urbanization, we’re going to just be like every place else ... and we’ll just become everywhere, U.S.A.,” Andrew Dunbar, a town resident involved in the litigation over Amendment 15, said on election day last May.

Approved by voters in 2014, TNOZ I affects residential areas in and around downtown. TNOZ II, adopted three years later, covers a broader swath — any area outside TNOZ I that allows residential use and has existing water and sewer, or where a developer is willing to pay for its installation.

Last year, in a bid to roll back some of those changes, 44 residents signed the petition to get Amendment 15 on the ballot. The planning board opposed the effort.

Shortly before the May 14 election, a group of property owners whose parcels would be affected by the amendment, including Vann, submitted two protest petitions that raised the required vote threshold from a simple majority to two-thirds. The move prevented the amendment, which won about 52 percent of the vote, from passing.

In June, 16 of the people behind Amendment 15 sued the town, arguing the protest petitions were invalid and the amendment therefore passed. Peterborough turned around and filed a lawsuit against two of them, arguing the amendment as a whole was invalid because it included two overlay zones. State law requires any zoning amendment to stick to a “single subject.”

The residents countered that TNOZ II — the zone they sought to repeal at the polls in May — was itself invalid because of how it was passed. Fernald, their lawyer, said the notice of public hearing in 2017 did not adequately convey the scope of the TNOZ II proposal, as required.

“We said, ‘Even if the town wins on some of the arguments they’ve brought up … you’re still gonna lose on the second overlay zone because it wasn’t properly enacted,’ ” he said. “And the town agreed with that.”

Vann questioned the significance of the notice issue.

“We worked our butts off,” she said. “We spent more than two years on that ordinance. I am deeply doubtful that people did not know what they were voting about in 2017.”

Meanwhile, a task force — formed in response to the Amendment 15 controversy and other recent zoning fights — began meeting last year, with a goal of building consensus around housing policy. When it announced the initiative in July, the town select board asked residents and planning board members not to propose any major zoning changes while the group does its work.

Given the short timeframe before May, voters are unlikely to see any new zoning proposals from the planning board this year in response to TNOZ II’s disappearance, Carrara said.

“I think that probably throughout the summer and into the fall, we will be discussing not only if the task force has come up with any recommendations by that time,” but also core issues like what kind of density town residents want and where they would like development to occur, he said.