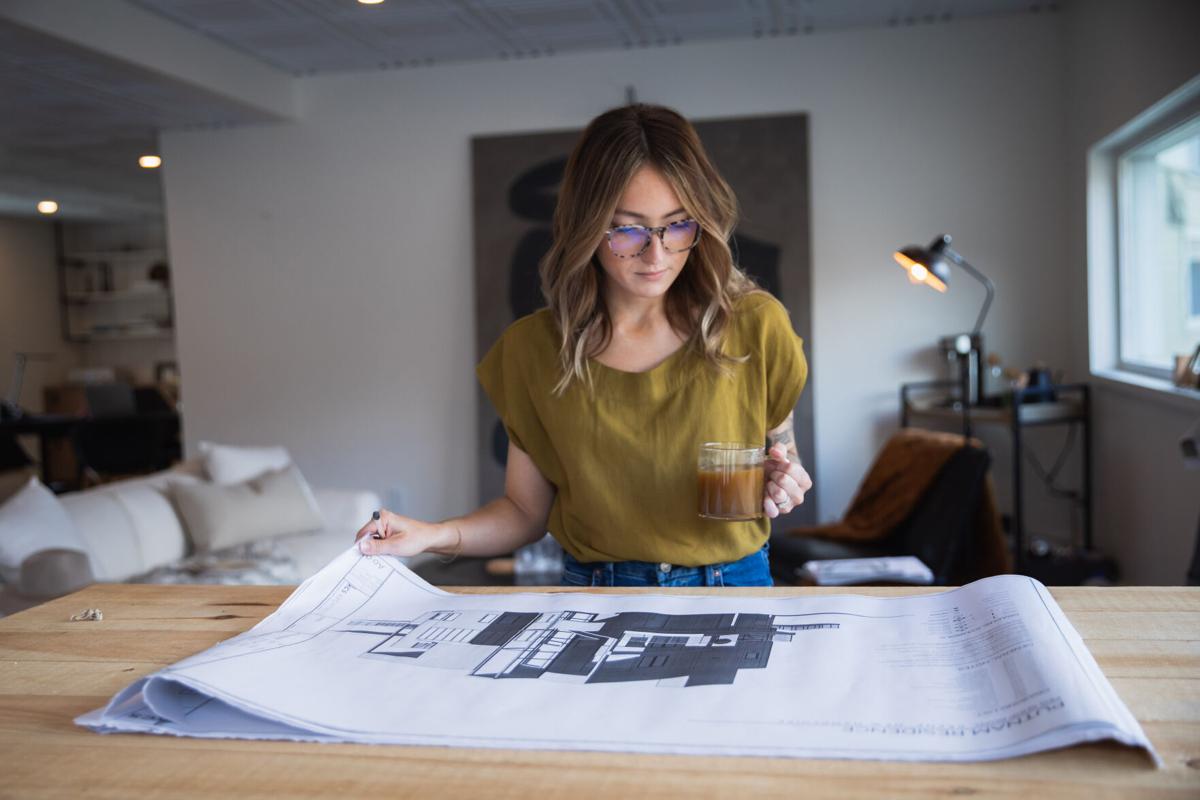 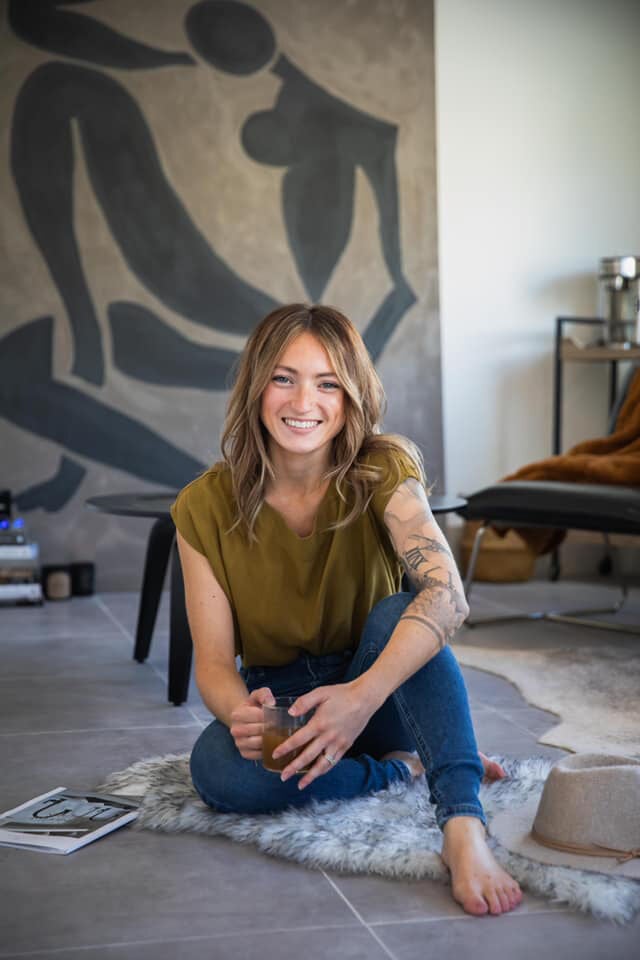 Sarah Blake grew up in southern Vermont and went to college to study psychology. She returned to Brattleboro, working for a time at Health Care and Rehabilitation Services as a peer-support specialist. At the same time, Blake was bartending and picking up odd jobs. It wasn’t until she started working at Perkins Home Center in Chesterfield, New Hampshire, that she found what would eventually become her calling: interior design.

Why did you decide to study psychology?

It started at Brattleboro Union High School, though I didn’t graduate from there. I took a high school completion program with Vermont Adult Learning and the Community College of Vermont, which allowed me to make changes in my life. I wanted to grow up and be more successful. Where I was in high school wasn’t working for me. Vermont Adult Learning allowed me to explore my interests —psychology and arts and music.

You worked for HCRS, but youdidn’t remain in human services?

I was working one-on-one with my peers, kind of like a counselor but not in a clinical setting. I was kind of a naughty teenager, and I remember being reluctant to let anyone connect with me when I was going through my own trauma. So it was important for me to share my experiences with my peers. It was a great job and a great place to work, but it was emotionally taxing. It wasn’t a healthy place for me to stay long term.

What was going through your head at the time you decided you need to find other work?

When I realized I was pushing my limits, I started looking for something else. I had to ask myself, what do I want out of my life, out of adulthood? What kind of path should I put myself on now that I am starting to recognize my skills, my strengths and my weaknesses? For a while, I worked with a medical staffing company, finding work for psychologists and mental health workers who were looking for per diem placement. But I found I wasn’t using my preferred skills. I then went into business banking. It was really great, and I loved my experiences there, but there obviously wasn’t a lot of art in that.

But that wasn’t the only thing you were doing?

I was also bartending at the Marina in Brattleboro for eight years, where I say I had a second family, and I was definitely using my psychology

degree. That’s where I got to know Amy Michaud, who was the bath and kitchen specialist at Perkins. She kept asking me to come work with her, but it never happened. But then one day, she called me and said, “I really need you to come work here.” I left the bank, and I was a little bit nervous because I was doing OK there. Taking the leap was worth it. I learned so much from her. She was really a mentor for me, helping me to figure it out, how to hone my skills and turn them into something lucrative.

When did you decide to start your own business?

I was at Perkins for a few years. My husband and I (Dan Blake, who recently purchased One Stop Country Pet Supply in Keene and Brattleboro and Barre, Vermont) opened a tile installation business on the side. I had left Perkins and was running the tile business, but I was still bartending, and I was also driving the beverage cart at the Brattleboro Country Club.

So how did you happen to open Sarah Blake Designs?

As soon as I left Perkins, Amy, who had left about six months before, called me up and said, “let’s do this together.” Dan and I continued the tile business, and I continued to drive the beverage cart, but I dove into working for Amy as a subcontractor, doing kitchen and bathroom design. I had built up a lot of relationships with contractors over the years, and growing up here, I also knew a lot of people in the business. It was slow going at first, but I did have enough work flowing in that I could see it was turning into something bigger. Amy and I worked together for about a year-and-a-half, and about this same time, Dan heard One-Stop might be available for purchase. Our wheels started turning, and we thought, “What’s our next step?”

Striking out on your own had to be a little nerve-wracking?

At first, it was like a crazy idea. But I had the work coming in. We crunched some numbers, and I’m not afraid to work three jobs if I have to. Dan was super supportive through this, but this took right off. It’s pretty satisfying. No more multiple jobs for me, no more bartending.

How has the COVID-19 pandemic affected the way you do business?

I started right before the pandemic was declared a national emergency. I was worried, but two months later, I signed the lease on a former barbershop on Putney Road and renovated the office. I was nervous, but no one knew what was going to happen next.

So, what did happen?

People are at home more than they ever have been, so they’re looking at areas of their houses they’ve always wanted to change. They are needing to redefine spaces in their homes, maybe a new office space or a bigger kitchen table to work at. Or they’re finding with everybody home, the functionality of their houses has changed. And people weren’t traveling and weren’t spending money out in the world. People were feeling like they could spend money on their homes.

So, it seems this was the exact right time to get into this business?

The building industry is the busiest I’ve ever seen, and I’ve been doing this for almost six years. All the contractors I work with are extremely busy, booking out work six months to two years. Some are so busy they aren’t even taking more work now. Tradespeople are able to be more selective on what jobs they take, which are more lucrative or meet their artistic eye or strong suits.

Do you find you are still able to use your psychology degree?

Working directly with a customer, they might need a little help trying to figure out what they want and what they need. I am often working with people who are spending a lot of money on what they might consider to be a luxury. That can be really challenging for people, making sure they are making the right decision. And most people don’t want to renovate their kitchen more than once in a lifetime, so it can be stressful. They are also being displaced, not having a functioning kitchen for weeks. There are a lot of moving parts, a lot of people involved — a contractor, a subcontractor, plumbers, electricians, maybe an architect. And then there’s me. Designing an emotionally safe place for people — the kitchen is often the heart of the home — requires strong communication skills and an understanding of people. That’s the part I really enjoy — meeting people and learning how they live their lives and finding a way to create a space that fits that.