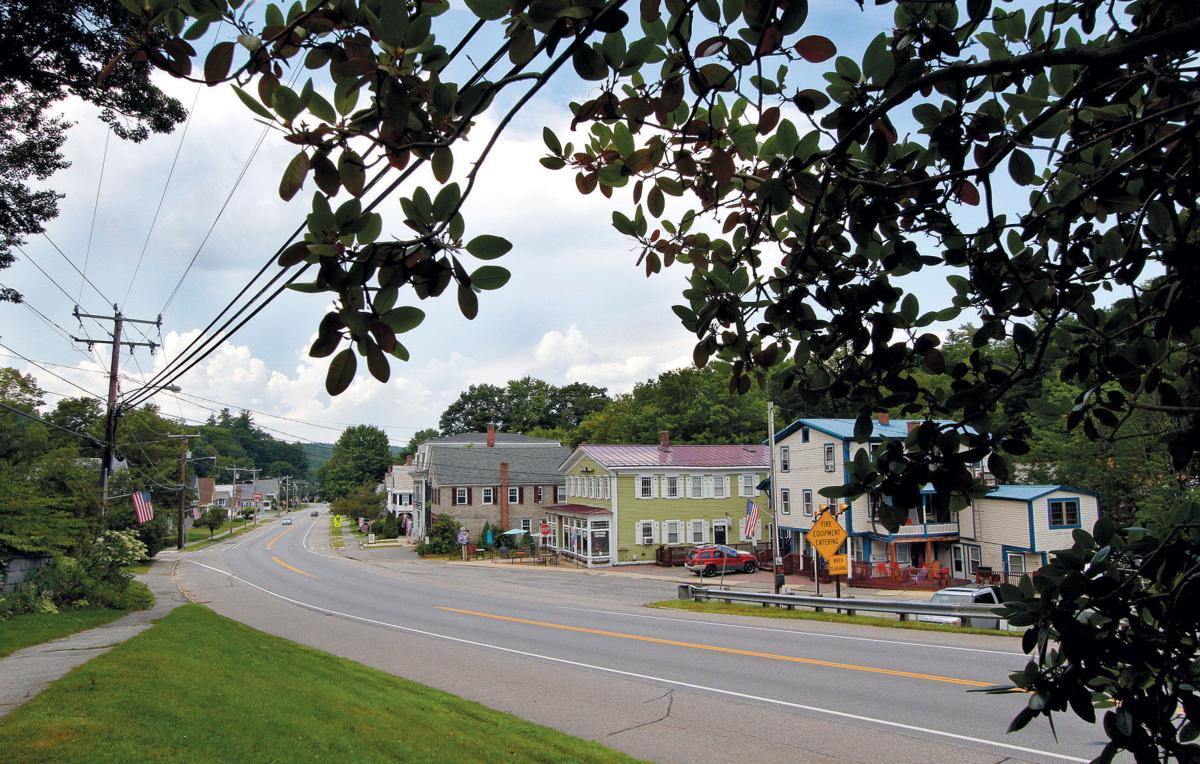 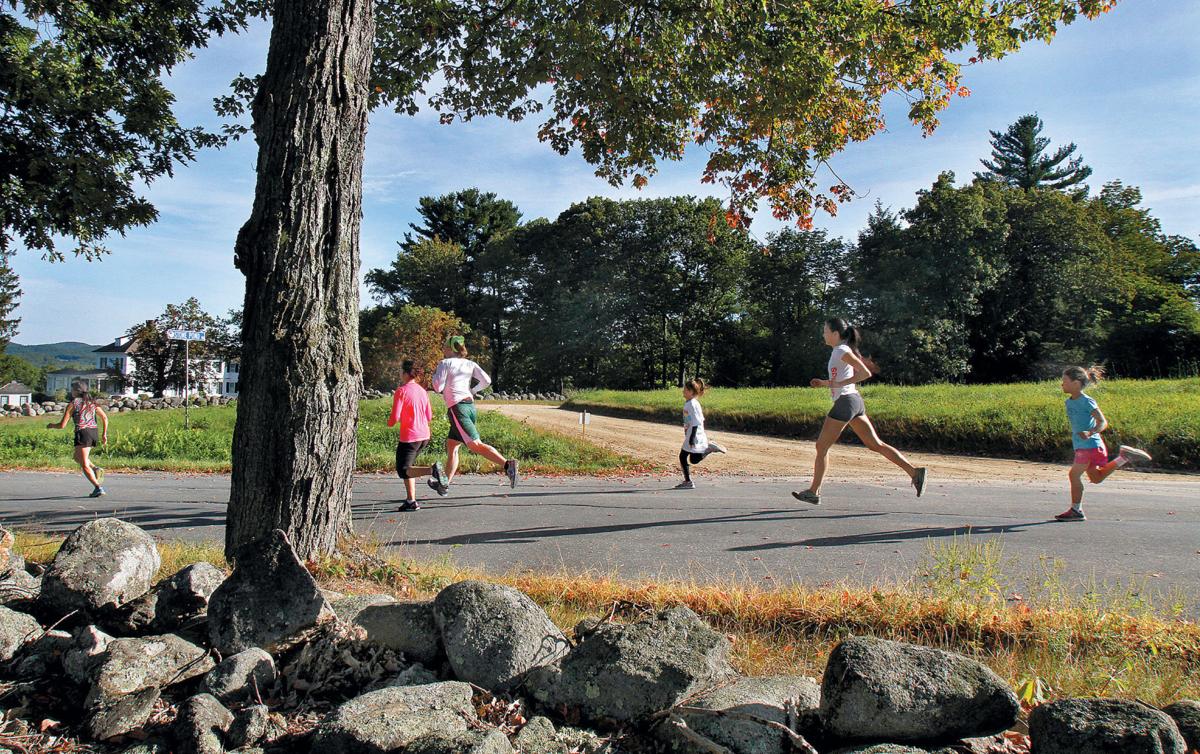 Competitors in the Marlborough Madness 5K Race and Fun Run run down Troy Road as they begin their race in September of last year. This was the 6th annual town event which included live music, magic, sidewalk and yard sales and more. 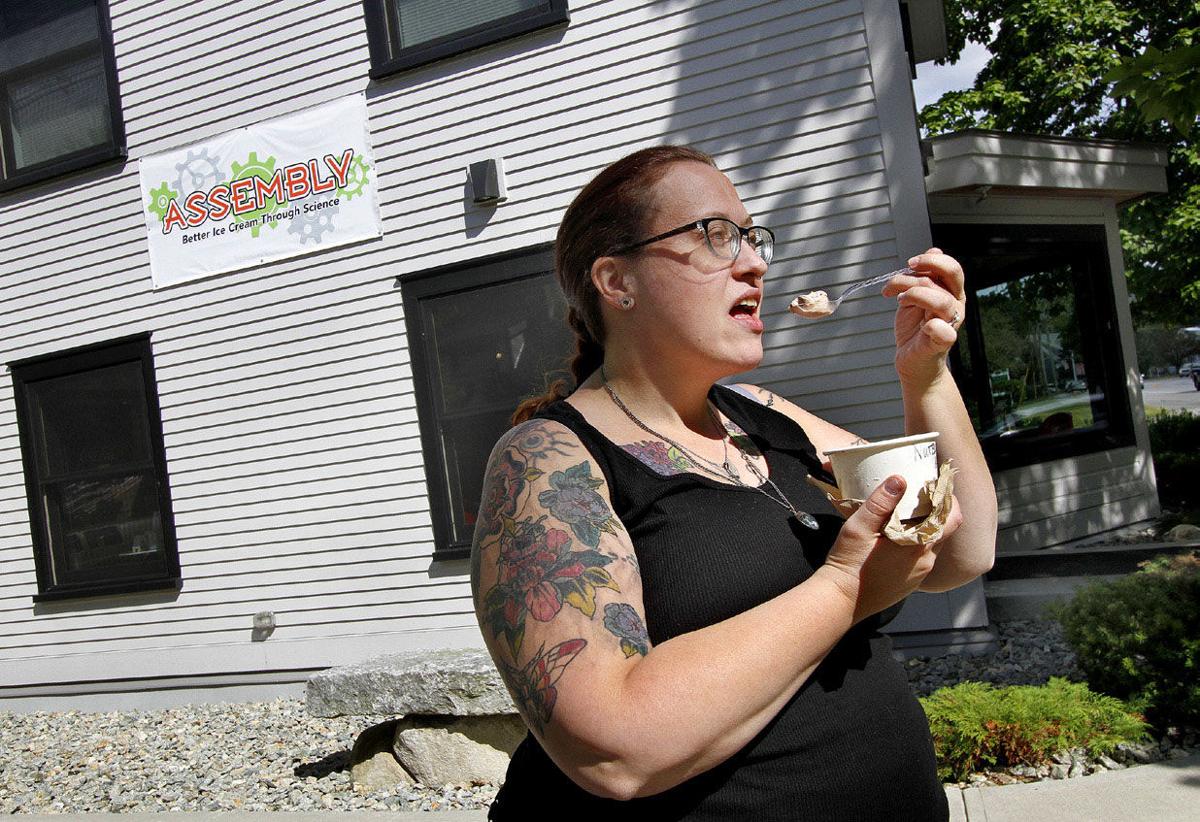 Iris Allaire, of Jaffrey, enjoys the uniquely-made ice cream at Assembly in Marborough 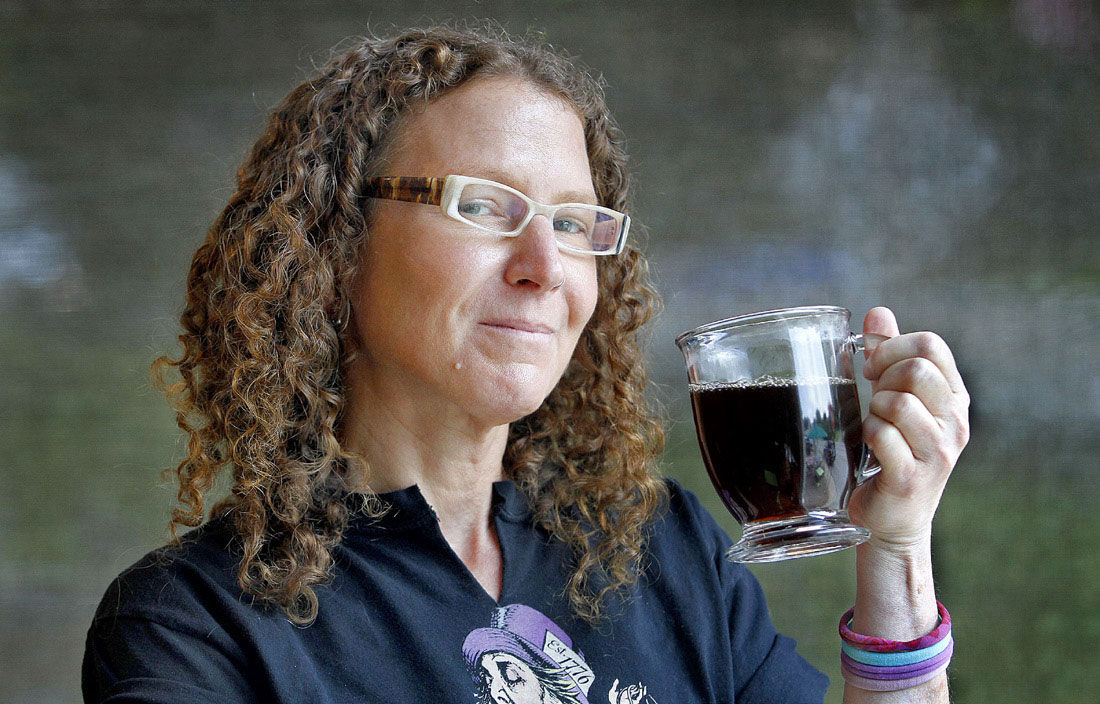 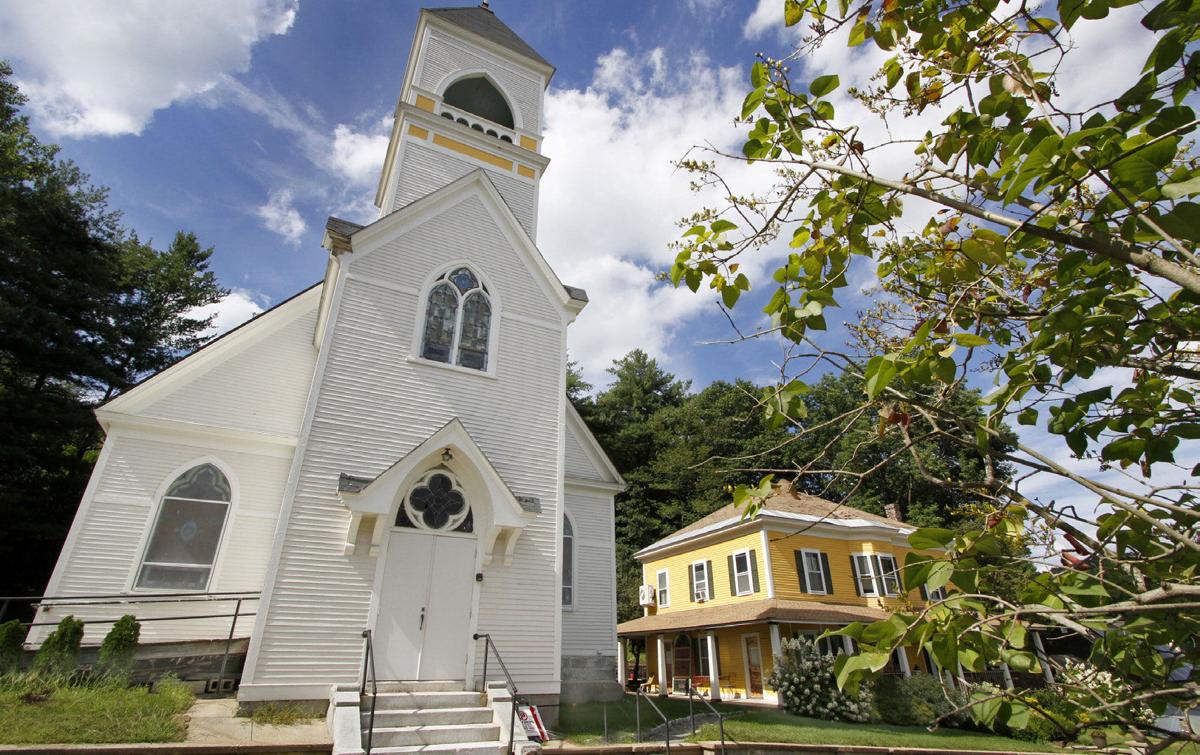 This former Catholic church on Ling Street in Marlborough has been renovated into Bogovich School of Dance and The Marlborough House event space, rented out for performances, parties and weddings among other things. 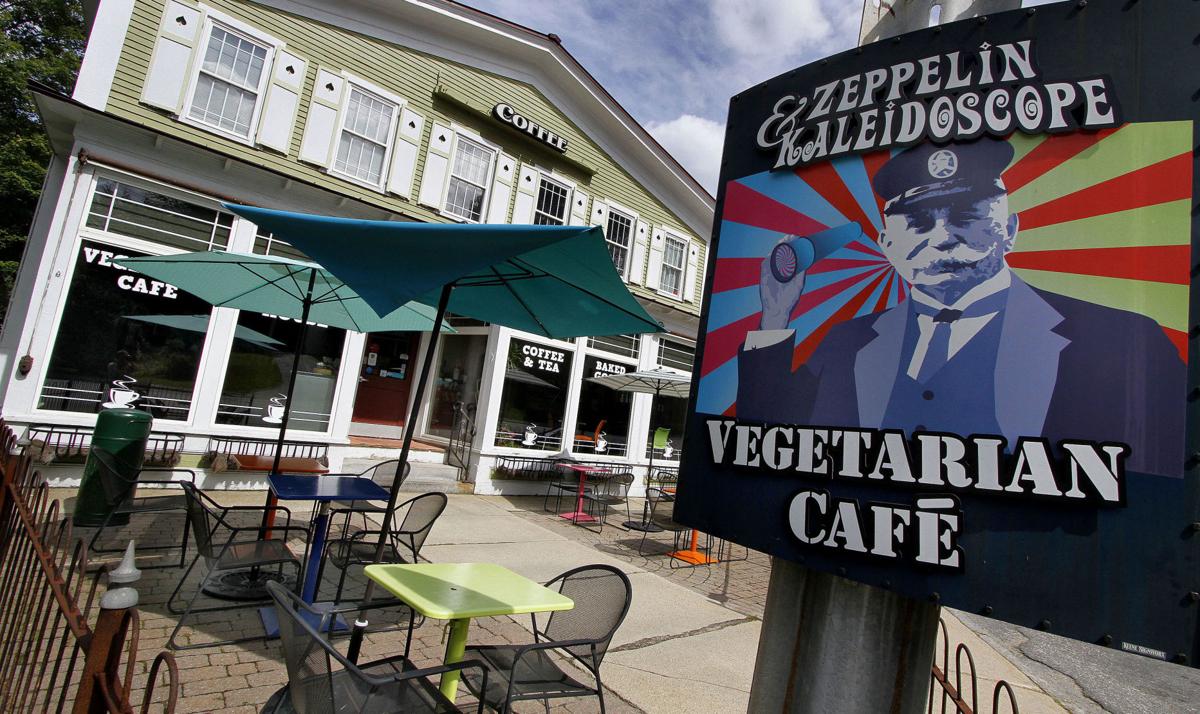 Zeppelin and Kaleidoscope on Main Street in Marlborough 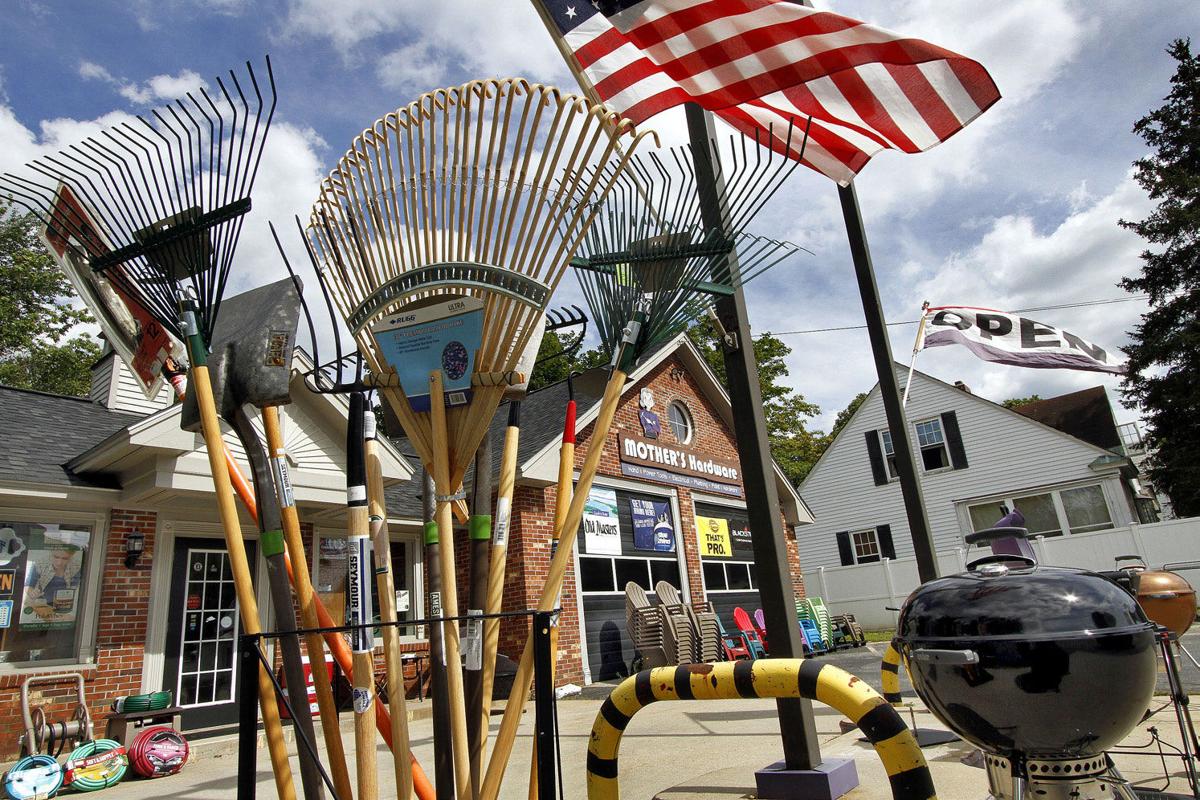 Competitors in the Marlborough Madness 5K Race and Fun Run run down Troy Road as they begin their race in September of last year. This was the 6th annual town event which included live music, magic, sidewalk and yard sales and more.

Iris Allaire, of Jaffrey, enjoys the uniquely-made ice cream at Assembly in Marborough

This former Catholic church on Ling Street in Marlborough has been renovated into Bogovich School of Dance and The Marlborough House event space, rented out for performances, parties and weddings among other things.

Zeppelin and Kaleidoscope on Main Street in Marlborough

While Webster might associate “malaise” with depression, dejection and good old ennui, Marlborough’s Malaise is having quite the opposite effect.

“She really has been — is — instrumental in what has been development in the downtown area,” says Marlborough Selectman Jane Pitt of local businesswoman Malaise Lindenfeld.

“She started kind of slowly purchasing one or two places that had buildings. …and I do think it has encouraged more business in town over the years,” says Pitt. “We see what the development that Malaise has instituted has produced. We’ve had a number of small businesses who have come in right along 101 and they are perfectly appropriate businesses with respect to traffic and parking and use.”

A TOWN BUILT BY THE STONE INDUSTRY

Chartered in 1752 by the Masonic Proprietors' agent as "Monadnock No. 5,” lots weren’t drawn in Marlborough until 1762, and were unsettled until 1764, according to the town’s history. The Town was incorporated in 1776, with town fathers taking its name from the Massachusetts community that was the home of their early settlers.

This was a town built on the backs of stone masons. A once booming industry in the early days, Marlborough stone graced some of the finest buildings in Boston, at Holy Cross College in Worcester, Massachusetts and locally. Stones eventually gave way to other manufacturing through the years including blankets, woodenware and toys, among other things according to the town’s history.

Today this hilly hamlet is full of vistas of Mt. Monadnock and towering homes harkening a time that Marlborough residents and tourists won’t forget.

Pitt says she’s been coming to Marlborough since she summered there with her mom as a kid. Though they lived in the city in Massachusetts, her mother was an avid angler. In fact, it was during a fishing trip that Pitt’s mother spotted a little cabin that she just knew would be a perfect summer place for her family.

“She tracked down the owner and bought the place and that’s where we spent our summers,” says Pitt. “When I retired from a law practice in 2003, I moved from Boston up here permanently.”

A HIGHWAY RUNS THROUGH IT

Pitt says Marlborough’s biggest challenge has always been that its Main Street is Route 101.

“In the early days that was a pretty quiet road,” she says. “When 101 became kind of a throughway east to west, I think that created quite a challenge because the town center was bifurcated, or bisected.

“And when you drive down and through Marlborough, all along Route 101 there are these beautiful homes. It’s a beautiful stretch of roadway. In the old days, it was almost entirely residential.”

But that started to change around the early 2000s, she says, when people started populating the downstairs of these old buildings with businesses and the upstairs with living spaces.

“It kind of enlivened the area,” notes Pitt. “And then, at some point along the way Malaise came into town.”

Malaise Lindenfeld, 55, owns at least six Main Street businesses in town. It used to be seven until she recently shuddered and put up for lease the building that housed one of her oldest shops, Inkubus Haberdashery, a funky punk/Goth clothing store with an online component.

Her other businesses include Mother’s Hardware; Suds to be You laundromat; Zeppelin and Kaleidoscope, a vegetarian café; Assembly Creamery, a nitrogen ice cream shop; Piedra Fina, a fine Latin cuisine restaurant; and Audrey’s Café, featuring classic American breakfast and lunch. Not on Main Street, but still in Marlborough, resides her media company, Cerberus Media LLC, and her property management company, Unicron Property Management.

“She has a way of bringing in things that are a little different,” says Jordana Korsen, owner of recent Marlborough arrival, Hot Glass Art Center located at 99 Main St.

“They are kept clean and professional and nice and — there’s other sort of working class, blue collar towns in the area that aren’t nearly as nice, because the attention to detail is not there. But (Lindenfeld’s) businesses — our studio too — it’s important.”

So the story goes, Lindenfeld had never even heard of Marlborough before she decided to settle Inkubus there.

She grew up in Caracas, Venezuela, the youngest of three. After high school, she came to the states to go to school. She was 17 and in a strange place where she didn’t know the language but she worked hard and learned quickly through classes at Columbia University.

She went on to study filmmaking at New York University where she met her future husband, Beau Gillespie. After a junket in Mexico City, a degree in fine arts from the New School for Social Research, and a study of the culinary arts at the New York Restaurant School, the couple settled in Miami, where Lindenfeld managed a coffee shop and entered the family business, managing Florida residential and commercial properties owned by her father in Venezuela. She ultimately earned certification as a real property administrator and discovered a passion for real estate.

She went on to launch an art gallery in Coconut Grove and open a Goth retail store a space adjacent to the gallery and also sold on the internet.

By 1999, Lindenfeld and her husband were ready to get out of the city. After having visited their son at boarding school in Rindge frequently, they moved to Jaffrey and later Dublin.

After six years in the Granite State and with Inkubus growing, she started looking for a physical space to store her merchandise.

“I didn’t even know Marlborough was a town,” says Lindenfeld. “I thought it was part of Keene and would just drive by.”

She bought an 1800s brick building right on Main Street that used to be a pizza place and had it renovated.

“It was so beautiful when it was done that I decided that maybe it should be a real store,” she says. “It was a happy coincidence that next to Inkubus was a café that was selling and I decided to buy it — just to kind of to keep a little control over what was going to go in there. And once I had those two businesses, people started coming to me — and they still do — asking ‘hey are you interested in this?’ Sometimes I do it and sometimes I don’t.”

In fact, she says, Mother’s Hardware was born out of the fact that when she first moved to Marlborough, folks in town had told her they were hoping it was going to be a hardware store.

“That kind of stuck with me,” she says.

Pitt says when the owner of a local gas station decided to retire, and the building sat on the market for awhile, Lindenfeld snapped it up and gave the people what they wanted.

And that’s the key Pitt says to some of Lindenfeld’s success. She sees a need and fills it. Which is important to the people in Marlborough. This was never more evident, Pitt says, than when a chain dollar store wanted to tear down one of the old homes along Main Street to make way for one of its stores. Pitt says the opposition from locals was so fierce, that the company picked up stakes and abandoned the request.

“I think what it said to me is that when push comes to shove, the people of Marlborough really value that area,” says Pitt.

“They value the beauty of it and the character of it, and they came out to make sure that it stayed that way,” says Pitt. “And there lies the big contrast between what Malaise has done … and some national chain coming in and dropping a steel building right in the middle of an area like Marlborough.”

Pitt also says it’s taken some courage to do that. Given the blue collar, rural vibe of the town, it took some guts and a little bit of blind faith to open a Goth clothing store there. That same chutzpah was needed to launch a small hardware store in the era of the big box, a Latin restaurant off a rural highway and a nitrogen creamery in an old office building.

And that courage is contagious, says Korsen of Hot Glass Art Center.

“Marlborough, a little bit did strike me as an up and coming place,” she says.

And when it came to the decision to have her glass studio there, the choice wasn’t difficult.

“You have 101 ... where you drive 30 miles per hour, you have the building and a large parking area. The visibility is very appealing, but also there were other businesses around. And one thing attracts another thing. The more you have going on, the more you could have going on,” says Korsen. “Marlborough definitely seemed cool in terms of what was there and you know, Malaise is responsible for most of it.”

In addition to Hot Glass, and Lindenfeld’s flights of fancy, others have slowly but surely started making Marlborough their home.

One such example, Pitt says, is Jeremy and Tammy Shepard, who renovated the old Catholic Church on Ling Street (just off of Main), turning it into Bogovich School of Dance and The Marlborough House event space rented out for performances, parties and weddings among other things.

Also nearly new to Marlborough, is Main Crust Pizza, Talon Financial, and, just outside of downtown, Route 101 Uncommon Goods, a store specializing in the sale of local products.

“I see slowly more businesses popping up,” says Lindenfeld. “I think it’s kind of like a hub for more original mom and pop places. And I think, I hope, it’s going to continue like that. That seems to be the trend.

Melanie Plenda is a freelance writer from Keene, New Hampshire.